Submitted Successfully!
Thank you for your contribution! You can also upload a video entry related to this topic through the link below:
https://encyclopedia.pub/user/video_add?id=13156
Check Note
2000/2000
Anabaenopeptins
Edit
Upload a video
This entry is adapted from 10.3390/toxins13080522

Anabaenopeptins (APs) are structurally diverse peptides widely distributed in distinct ecosystems among cyanobacteria. Some structural features of these molecules are shared with other cyanotoxins, such as the presence of modified residues, exocyclic amino acids, circular structure, and amino acids in D-configuration. However, among the cyanopeptides, the ureido linkage is exclusively found in APs. Thus, these cyclic peptides demonstrate toxicity and structural diversity which will be explored in this topic, including biotechnological and ecological relevance, and their distribution.

Cyanobacteria are photosynthetic microorganisms widely distributed in the world. They can inhabit several types of ecosystems, including aquatic and terrestrial. These microorganisms produce a great variety of bioactive compounds, which have been investigated mainly due to their biotechnological potential and environmental relevance [1][2][3]. Cyanotoxins are among the most studied compounds originated from cyanobacteria since they are capable of negatively affecting human and animal health [4][5]. These metabolites can vary drastically concerning their action mechanism and chemical structure, which include peptides, alkaloids, and lipopolysaccharides [6][7][8]. The majority of publications related to peptides from cyanobacteria have mainly focused on the class of microcystins with over 300 characterized variants [9][10]. However, cyanobacteria usually do not exclusively produce a single class of compounds, given that specific strains are co-producing different groups of secondary metabolites [11].

Other peptides beyond microcystins have been poorly explored, lacking information mainly in the environmental sciences [11]. These several metabolites are known for their potent inhibitory properties against several enzymes in nanomolar concentrations, resulting in toxic effects [12][13]. Moreover, similar to microcystins, they have been regularly detected in diverse environments [14]. In certain regions, their occurrence is more pronounceable than microcystins themselves [15]. However, information about the concentrations which are encountered is rarely reported [11]. Cyanobacteria have developed different peptides as a protection mechanism against parasites [16]. Concerning their origin, some peptides as microviridins and cyanobactins are produced via ribosomal whereas others as microginins and aeruginosins are synthesized by non-ribosomal pathways [13][17][18].

Among the most recurrent peptides encountered in the environment are anabaenopeptins (APs), a family of cyclic peptides containing six amino acid residues [19]. They have been found in an enormous variety of cyanobacteria isolated from both the aquatic and terrestrial environments, including Anabaena , Nostoc , Microcystis , Planktothrix , Lyngbya, and Brasilonema [12][20][21][22][23][24]. In their general structure is a well-conserved Lysine (Lys) residue in D-configuration, which is responsible for the ring formation and five additional variable amino acids, either proteinogenic or non-proteinogenic, resulting in 124 described AP variants from cyanobacteria (Supplementary Table 1) [19]. Besides their structural variety, molecules belonged to this group exhibit an impressive functional diversity, which includes inhibitory activity for proteases, phosphatases, and carboxypeptidases [22][25][26].

The enormous structural diversification of anabaenopeptins can be attributed to the low substrate specificity of some enzymes involved in their synthesis as well as the presence of alternative starter modules [16]. Their production is strongly influenced by environmental factors [27]. Besides that, because of their diversified bioactive properties, they exhibit an elevated biotechnological potential. This review aims at presenting the main researches on anabaenopeptins, emphasizing their general characteristics, biosynthesis as well as ecological and biotechnological relevance.

Being non-ribosomally synthesized, anabaenopeptin structures comprise a ring of five amino acids connected through an ureido linkage to an exocyclic amino acid. Thus, its general structure is represented by X 1-CO-[Lys 2-X 3-X 4-MeX 5-X 6], where the bracket represents the cyclic region of this peptide and X are variable amino acids according to their positions represented by the superscript numbers ( Figure 1 ). Its ring is formed by cyclization of the C-terminal carboxyl of the amino acid at position 6 to the ε-NH 3 of the well-conserved D-lysine at position 2. Furthermore, the α-amino group of Lys is connected to the exocyclic amino acid X 1 via an ureido bridge. Due to its non-ribosomal nature, proteinogenic and non-proteinogenic amino acids are usually detected in this hexapeptide [19]. 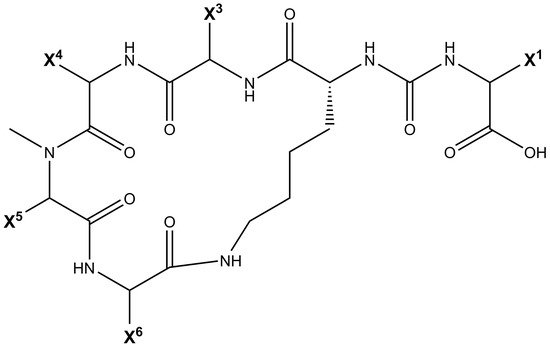 Figure 1. The general structure of the class of Anabaenopeptins. X corresponds to different amino acids in their respective positions represented by the superscript numbers.

Some of those conserved features from APs can also be visualized in other cyanopeptides. Veraguamides A-G are cyclic hexadepsipeptides, and they do not possess any exocyclic residue. Lyngbyastatin peptides demonstrate elastase, trypsin, and chymotrypsin inhibitory properties. Their structures consist of a 6-member ring coupled to a chain of 2 exocyclic residues and can bear modified and unusual residues. Also possessing a 6-member ring structure and 2 exocyclic amino acids, Tiglicamides A-C were obtained from Lyngbya confervoides [28]. 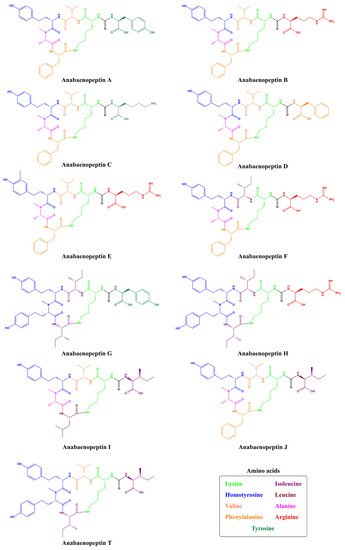 Structurally, despite the major amino acid variability, Microcystins, Cyanopeptolins, and Anabaenopeptins are most similar. Microcystins and Cyanopeptolins are heptapeptides and Anabaenopeptins are hexapeptides and comparting these structures, it is possible to distinguish a ring core and a linear region. Although Microcystins are technically cyclic peptides, the Adda moiety projected outside the ring may act like the fatty acid in Cyanopeptolin A or Tyrosine in Anabaenopeptin A. The Adda moiety is crucial for MCs inhibition towards phosphatases, as its long linear chain can penetrate the enzyme active site together with other side chains, having a similar role as the exocyclic residue of APs (Tyrosine from Anabaenopeptin A), as it will be further discussed in Section 7 [11][34]. This exocyclic or even protuberant residue was not observed in Aerucyclamides that only present a cyclic structure or Aeruginosins and Microginins, which are linear structures [11]. Therefore, cyclic peptides bearing exocyclic residues and unusual and D-configuration amino acids are also found in cyanobacteria, however, the ureido linkage in cyanopeptides is, so far, an exclusive characteristic of Anabaenopeptins.

3. Occurrence of Anabaenopeptins and factors involved in their expression

A total of 45, 29, and 12 cyanobacteria strains from freshwater, marine and terrestrial environment have been analyzed for AP production, respectively. As seen in Table 1 and according to the literature [35][36][33][37][38][39][40][41][42][43][44][45][46][47], marine strains produced a total of 50 different variants of APs, in comparison to 43 and 34 variants from freshwater, and terrestrial strains, respectively ( Figure 3 ). Thus, marine cyanobacteria demonstrate to produce a higher number of distinct APs variants in comparison to the remaining strains from different sources. However, APs from freshwater environments have the greatest diversity of amino acids in the majority of positions ( Figure 4 ). Thus, these features could be associated with different obstacles faced in their respective environments as well as the fact that both belong to aquatic environments [48], however, this hypothesis requires further studies. Some of those APs are shared among different strains isolated from distinct environments: 2 anabaenopeptins (A and B) variants were detected in all ecosystems; in comparison, strains from both aquatic habitats had 13 APs variants in common (D, F, J, 807, NZ841, Oscillamide Y, and Nodulapeptins B, C, 855B, 871, 879, 897 and 915A) ; in contrast, only anabaenopeptin C were produced by both terrestrial and freshwater, and none Anabaenopeptin variant was shared by both terrestrial and marine strains.

Table 1. Occurrence of anabaenopeptins in different cyanobacteria genera and species. 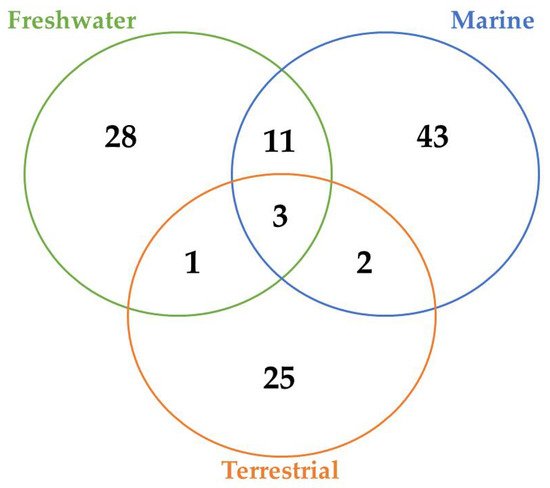 Figure 3. The number of Anabaenopeptins variants detected and shared among strains of cyanobacteria from different environments, including environmental samples. 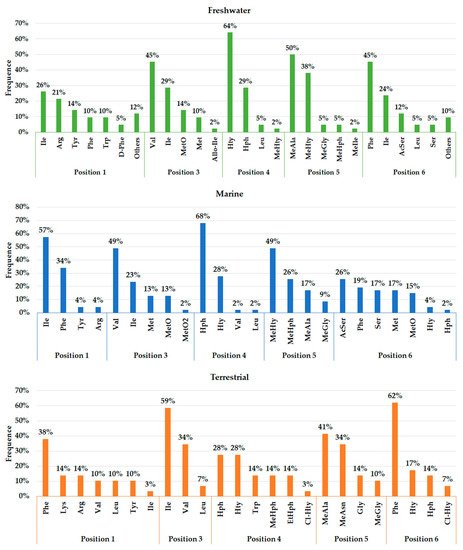 Figure 4. Relative frequency (%) of amino acids in positions 1 and 3–6 of variants of anabaenopeptins characterized according to their environment (freshwater, marine and terrestrial). The total number of variants with elucidated sequences were 42, 47 and 29 for freshwater, marine, and terrestrial environments, respectively. Position 2 was omitted as the D-Lys residue being conservated among AP variants.

According to Table 1 and Figure 3 , there are AP variants shared among cyanobacteria strains from different environments according to the previous discussion. Anabaenopeptins A and B are the only variants detected in all habitats analyzed, and the only difference between those variants resides at the exocyclic residue. AP B is still the most recurrent among these oligopeptides in cyanobacteria ( Table 1 ), corroborating with the previously raised hypothesis that this variant was the first cyanotoxin of this class to be emerged. [71]. Furthermore, the number of common anabaenopeptins variants increases when a comparison is made among strains only from aquatic habitats (freshwater and marine): Anabaenopeptins D, F, J, 807, NZ841, Oscillamide Y, and Nodulapeptins B, C, 855B, 871, 879, 897 and 915A. Besides their production by both freshwater and marine cyanobacteria, these prevalent oligopeptides seem to be more recurrent in marine environments, given that a higher number of cyanobacteria strains from this habitat are able to produce these APs comparing to freshwater, except for Oscillamide Y, which is more recurring in the latter. Among those variants, Nodulapeptin B is the most frequent in marine microorganisms. Besides, the only difference between the AP C (produced by freshwater and terrestrial strains) and both A and B variants is the exocyclic amino acid, and the former was not detected in marine cyanobacteria.

In addition to interaction with other cyanobacteria, these microorganisms are capable to establish symbiotic associations with invertebrates, such as corals, mollusks, and sponges. Both organisms can be benefited during this consortium through secondary metabolite production, for example [72]. Sponges host an enormous quantity of microorganisms belonging to diverse phyla, where cyanobacteria are mainly represented by genera Aphanocapsa , Synechocystis , Phormidium , and Oscillatoria [73]. These photosynthetic microorganisms can occupy either extra- or intracellular spaces, aiding the host in the control of the redox potential, supplying pigments and energy through carbon fixation, and in the defense mechanism by the production of secondary metabolites. Published reports have demonstrated that as a consequence of these processes, cyanobacteria have their metabolic profile altered, resulting in the production of distinct variants of natural products. The compound 2-(2’,4’-dibromophenyl)-4,6-dibromophenol is solely biosynthesized by a cyanobacterium belonging to genus Oscillatoria in association with the sponge Dysidea herbacea [74]. These factors corroborate with the hypothesis that anabaenopeptins primarily observed in sponges could be of cyanobacterial origin, as brominated APs variants were isolated only from sponges [75][76][77] and the Oscillatoria genus is known for APs production. For instance, the polyketide nosperin and some variants of oligopeptide nostopeptolide are encountered exclusively during symbiosis, which may be the same mechanism for anabaenopeptin variants production found in sponges.

Cyanopeptides such as APs have a well-demonstrated capacity of protease inhibition [78]. Protein Phosphatase 1 (PP1), Protein Phosphatase 2A, Carboxypeptidase-A (CPA), Human Serine Protease, Leucine Aminopeptidase, Trypsin, and Thrombin have already been tested against several cyanobacterial extracts and confirmed the catalysis blockage [11].

Serine/threonine protein phosphatases inhibition was also reported [22][25]. Nevertheless, several other cyanopeptides presented more effective IC 50 levels against elastase, such as some variants of lyngbyastatins, symplostatins, microvirins, and others. Concerning PP1, MCs remain the best inhibitor among all cyanopeptides [11]. IC 50 reported values to MCs and nodularins are from 1.1 to 1.9 nM as PP1 inhibitors [79]. In this case, APs remain promising candidates in Carboxypeptidase inhibition.

Cyanopeptides blooms events may present the production of different classes of cyanopeptides like MCs, APs, and cyanopeptolins. A few studies quantified cyanopeptides beyond Microcystins, even so, in 10 eutrophic lakes in the United States and Europe the cyanopeptides concentration including these 3 types of cyanopeptides were from <4 µg/L to >40 µg /L [11]. In wet weight, 2.1 mg of AP and 7.4 mg of Microcystin-LR were obtained from 1.7 kg of biomass in a water bloom of lake Teganuma (Japan) [33].

Besides some cyanopeptides presented anticancer activity, APs have been presented poor results in cytotoxic tests [80]. Anabaenopeptin B had been tested about its anticancer potential and did not demonstrate cytotoxic effects against N2a, MCF−7, and GH4 cells even at the 500 µg/mL concentration [81]. Despite anticancer activity was detected in Aliinostoc sp. CENA543 extract containing AP , it was not possible to attribute this effect exclusively to this class of oligopeptides because there were other cyanopeptides in the extract, and the exact AP was not identified [82]. No cytotoxic activity was presented by Nodulapeptins 883C, 869, 867, 865, and Anabaenopeptin 813 as well [35].