Submitted Successfully!
Thank you for your contribution! You can also upload a video entry related to this topic through the link below:
https://encyclopedia.pub/user/video_add?id=13151
Check Note
2000/2000
Air during New Year’s Eve
Edit
Upload a video
This entry is adapted from 10.3390/atmos12080975

Mosses are one of the best bioindicators in the assessment of atmospheric aerosol pollution by heavy metals. Studies using mosses allow both short- and long-term air quality monitoring. The increasing contamination of the environment (including air) is causing a search for new, cheap and effective methods of monitoring its condition. Once such method is the use of mosses in active biomonitoring. The aim of the entry was to assess the atmospheric aerosol pollution with selected heavy metals (Ni, Cu, Zn, Cd, Hg and Pb) from the smoke of fireworks used during New Year’s Eve in the years 2019/2020 and 2020/2021.

Air quality in Poland is one of the most important research topics concerning atmospheric aerosol pollution [1][2][3]. Special attention is given to air pollution by heavy metals and particulate matter (PM) in areas of high exposure and smog [4][5][6][7][8]. The main causes of poor air quality in Poland include: quality of heating systems used in households [8][9][10][11] and emissions generated by vehicular traffic [8][10][11].
Among the different types of pollutants involved in the overall atmospheric aerosol contamination, short-lasting but active point sources of pollution should also be considered [12][13], which include fireworks shows [14]. This is one of the most unusual sources of air pollution, which has been investigated quite frequently and on a large scale in the literature [15][16][17] which allows the identification of specific pollutants related only to the burning of fireworks [18][19]. Although the show associated with the New Year celebrations only takes place once a year, it has a very significant impact on the air quality. The environmental pollution burden is enormous in terms of sudden increases in pollution by selected heavy metals, PM of various fractions and also negative health effects [18][20].
People’s activity related to celebrating the New Year in such a way causes that, along with the increase of social awareness of the bad condition of the environment (including the atmosphere), people ′′run away′′ from polluted places and move, if only for a short time, to places where the air quality is better [21]. This choice is made possible by increasingly better ways of predicting and forecasting air pollution, based for example on various types of air pollution indices (APIs) [22]. Such methods are also used in the air pollution mathematical model for comparison with moss biomonitoring results [23]. This biological method of environmental assessment is becoming increasingly competitive with instrumental methods for measuring environmental pollution [24], but due to its lack of referenceability in relation to classical measurement methods, it is an object of continuous standardisation and review [25], which does not prevent it from being included in the national system for assessing environmental quality and monitoring pollution [26].
For active biomonitoring studies using mosses, however, it is crucial to use a biomonitor whose (research) value matches its definition [27]. Moss as a biological indicator of air quality is not only a chemical adsorbent [28], but above all a living organism [29], so it is important to control and measure vital parameters during the experiment [30]. Research to date indicates that moss as a biomonitor of air pollution, e.g., heavy metals, is most often used for short exposure periods. Such studies were performed for a minimum of one day [31], several days [32][33] or a week of time [34]. This is mainly related to the fast feedback time about the air condition at the study site [25]. So far, only a laboratory experiment was encountered in the literature [35], in which moss was used as a biomonitor of air quality analytes from fireworks being fired. In the second case, the authors only suspected contamination of the biomonitors due to fireworks being fired [36]. It was used as a space to use in an environmental the use of a moss bioindicator to assess the concentrations of pollutants emitted by fireworks as they are set off on New Year’s Eve under field conditions.
The aim of this study was to measure the concentrations of heavy metals accumulated by the moss Pleurozium schreberi in a town during the fireworks show on New Year’s Eve at the turn of 2 consecutive years. The moss species Pleurozium schreberi has also been shown to be a sensitive biomonitor of point sources of pollution.

Concentrations of the heavy metals Ni, Cu, Zn, Cd, Pb and Hg, accumulated by Pleurozium schreberi mosses samples differ from each other within and between study periods of a given year. The concentration of individual elements is influenced by the moss species used and their accumulation capacity, exposure time and other environmental factors (interactions among elements, temperature, humidity) [37][38][39]. The changes in concentrations between the two study periods are also due to the global lockdown situation caused by the coronavirus pandemic restrictions. In the literature, one can find results indicating that air pollution has decreased significantly in this period in comparison to the values previously reported [40][41]. The impact of the pandemic on air pollution in terms of biological monitoring has so far been described by only one known publication, where is indicated that concentrations of selected metals accumulated by the moss Pleurozium schreberi, as part of passive biomonitoring studies, decreased by lockdown [42]. Our study confirms the above statements that heavy metal concentrations during the “NYE” period and in 2020/2021 were lower compared to the same period a year earlier (see Figure 1). This was influenced by national restrictions related to the limited possibility of overcrowding and participation in mass events celebrating the New Year, which had an impact on the reduced emissions from fireworks fired. According to the literature, air concentrations of heavy metals such as Cu, Zn and Pb are related to their emission during the fireworks burning [17][18][20][43][44][45] as was also confirmed by this research. During moss exposure for only 2 days (NYE period) [31 December and 1 January], concentrations of these elements were characterised by values comparable or higher to periods of longer exposure to moss contamination with these analytes (see also Figure 1). In our opinion, the results presented here represent the first environmental experiment using the moss-bag technique to determine the concentrations of heavy metals accumulated by mosses during New Year’s Eve (due to fireworks burning), together with the impact of the pandemic on air pollution at this time using active moss biomonitoring. 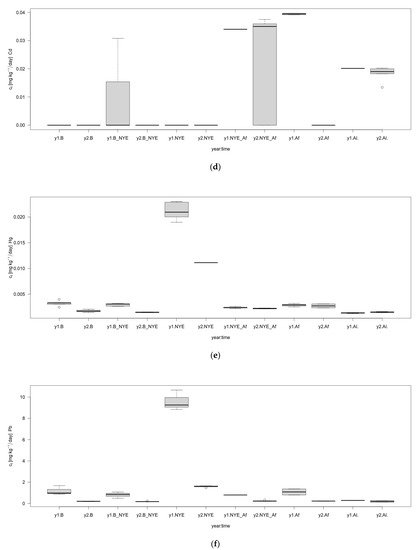 Figure 1. Concentrations of heavy metals in mosses samples (mg kg−1/day): (a) Ni, (b) Cu, (c) Zn, (d) Cd, (e) Hg and (f) Pb depending on the exposure time (y1, y2—period 2019/2020 and 2020/2021 respectively).
RAF values higher than 1.00 indicate significant elemental enrichment [46]. Such values were recorded for copper and lead in 2019/2020 and the impact of increases in these elements was related to the fireworks being fired. In contrast, high increments for nickel and mercury may be related to other air pollutants sources such as local, low level emissions [47].
The actual quantum efficiency of PSII photochemistry in the light measures the fraction of the absorbed light energy that is actually being used to drive photochemistry at PSII [48]. Its value is influenced by a number of factors, such as a change in metal concentration [49][50] and a positive effect on the increase in fluorescence yield over the course of the experiment may have been due to variable hydration [51]. The dependence of chlorophyll fluorescence yield variability on water content has been reported previously for Pleurozium moss [52] and our actual quantum yield values of PSII photochemistry were comparable with the results obtained by other authors for this species [53][54]. Due to the association of chlorophyll fluorescence with other vital parameters (chlorophyll content, osmotic indices, antioxidant enzyme activities) [55], we know that biomonitoring studies have been conducted on a living air quality bioindicator [56].

The results of the biomonitoring study indicate a variable air quality in the town of Prószków during New Year’s Eve on the example of a two-year study. Increased concentrations of copper, zinc and lead only during the 2-day “NYE” exposure confirm the effect of fired fireworks on the accumulation of these elements in the moss Pleurozium schreberi. This demonstrates the good accumulation capacity of this species for use during short periods of exposure to air pollution. Further research should focus on finding the best moss species for the determination of heavy metals in air from fireworks smoke.
Deposition of metals on moss during and after fireworks show could be affected by weather conditions. During the periods studied, the temperature, humidity, and wind speed were similar but not the same. A common feature at both NYE was no precipitation.
Actually the results of our research did not provide feasible information to estimate an influence of weather conditions on metals′ deposition after fireworks show. Valid conclusions could be drawn from repeated observations. This assertion implies continuation of the research with extension to other than NYE celebrations.
In the literature, the use of classical methods for determination of metals concentration in the air during fireworks show has been already described, but our study confirms the possibility of using bioindicators in air quality monitoring as a complementary method. Biomonitoring studies using the moss-bag method for the determination of other pollutants from fireworks shows should be continued.
In addition, the positive impact of the 2020/2021 lockdown on air pollution from emissions of fireworks launched was demonstrated, which was confirmed by determining lower concentrations of selected heavy metals accumulated by mosses. The practice of welcoming the New Year should change the accepted way of celebrating to one that does not cause deterioration of air quality and further pollution emissions.

More
© Text is available under the terms and conditions of the Creative Commons Attribution (CC BY) license; additional terms may apply. By using this site, you agree to the Terms and Conditions and Privacy Policy.
Upload a video for this entry
Information
Subjects: Meteorology & Atmospheric Sciences ; Plant Sciences
Contributor MDPI registered users' name will be linked to their SciProfiles pages. To register with us, please refer to https://encyclopedia.pub/register :
Paweł Świsłowski
View Times: 171
Entry Collection: Environmental Sciences
Revisions: 2 times (View History)
Update Time: 16 Aug 2021
Table of Contents
1000/1000
Hot Most Recent