Submitted Successfully!
Thank you for your contribution! You can also upload a video entry related to this topic through the link below:
https://encyclopedia.pub/user/video_add?id=13141
Check Note
2000/2000
Microphthalmia-Associated Transcription Factor
Edit
Upload a video
This entry is adapted from 10.3390/biom11071021

Microphthalmia-associated transcription factor (MITF) is a central player of melanocyte survival, function and development. It belongs to the MiT/TFE family of transcription factors in vertebrates, consisting of four distinct but closely related and evolutionary conserved members, including MITF, transcription factor EB (TFEB), TFE3 and TFEC. Structurally, MITF encodes a basic–helix–loop–helix leucine zipper (bHLH-ZIP) transcription factor, thereby exerting its function by regulating genes involved in cell cycle progression and differentiation, a role sustained throughout the process of melanogenesis and in melanoma.

Melanocytes are neural-crest derived cells that produce melanin, the primary determinant of skin color. Melanin is also found in hair, in the iris of the eye, and in the stria vascularis of the inner ear and, to a lesser degree, in a broad range of other tissues throughout the body [1]. There are two major types of melanin called eumelanin (dark, brown, black) and pheomelanin (yellow, red, light brown). Melanin is produced and stored in melanosomes, lysosome-related organelles that can be divided into four stages depending on their degree of maturation [2]. Stage I pre-melanosomes lack pigment but develop distinct fibrillar structures in a Pmel17-dependent process during stage II. Tyrosinase and other enzymes of melanogenesis reach stage II melanosomes via endosomal intermediates and initiate the production of melanin; these melanosomes are deposited on the fibers, resulting in their thickening and blackening with maturation to stage III. Melanin synthesis and deposition continue until all of the internal structure is masked in stage IV [3][4]. Modulators of melanin production include proteins involved in melanosome structure (i.e., Pmel17, MART-1), proteins involved in melanin synthesis and melanosome pH regulation (i.e., tyrosinase, TYRP1, TPC2), and proteins required for melanosome transport and distribution (e.g., Rab27a, myosin Va, melanophilin) [3][4]. Melanosomal pH is regulated by the vacuolar proton ATPase, Na + /H + exchangers, SLC24A5 (Na + /K + /Ca 2+ exchanger 5), and two-pore channel 2 (TPC2) [4][5][6][7][8]. TPC2, a cation channel permeable for sodium and calcium, expressed in late endosomes (LE), lysosomes and melanosomes, regulates pigmentation through two fundamental determinants of melanosome function: pH and size [7]. Different steps of melanogenesis are regulated by pH. First, the activity of tyrosinase, the rate-limiting enzyme for the production of melanin the optimal pH of which is 6.8 [9] with greatly reduced activities at a more acidic pH [5], while differences between monophenol oxidase and diphenol oxidase activities of tyrosinase in their pH dependence should be noted. Second, the activation of metatyrosinase (reduction of Cu II), the initial step of melanogenesis, is also highly pH-dependent. Third, the non-enzymatic DOPA-producing reaction, the redox exchange, is also strongly dependent on pH [10][11][12].

2. Role of MITF in Melanoma and Pathways Implicated

Microphthalmia-associated transcription factor (MITF) is a central player of melanocyte survival, function and development [13][14][15]. It belongs to the MiT/TFE family of transcription factors in vertebrates, consisting of four distinct but closely related and evolutionary conserved members, including MITF, transcription factor EB (TFEB), TFE3 and TFEC. Structurally, MITF encodes a basic–helix–loop– helix leucine zipper (bHLH-ZIP) transcription factor, thereby exerting its function by regulating genes involved in cell cycle progression and differentiation, a role sustained throughout the process of melanogenesis and in melanoma [16][17][18]. Mutations in MITF are associated with Tietz albinism-deafness syndrome and Waardenburg syndrome type 2A [19][20], and amplification of MITF is found in 15–20% of human metastatic melanomas and has been linked to poor survival. The M-MITF isoform is the predominant isoform in 80% of human melanomas [14][15][21].

MITF is regulated by numerous factors that exercise tight control on both its transcriptional and post-translational levels (i.e., ubiquitination, acetylation and sumoylation), given that it is downstream of several pathways [22][23], as illustrated in Figure 1 . A rheostat model of MITF in melanoma has been proposed by Carreira et al. (2006), where MITF yields three phenotypes, hence varied cellular responses in melanoma based on its activity. At the highest state where c-AMP induction leads to peak MITF activity, melanoma cells express differentiation target genes (i.e., Tyrosinase and MART1), giving rise to a pigmented phenotype and undergoing terminal differentiation. In contrast, the cells at the intermediate activity level are at a reversible proliferative state where enough MITF is expressed to activate MITF genes linked to survival (i.e., BCL2 and CDK2), concomitantly suppressing p27Kip1 expression through the regulation of Dia1, preventing differentiation. While MITF at its lowest activity brings about highly invasive cells exhibiting stem cell-like properties and low proliferative and pigmentation capacities that undergo p27Kip1-mediated G1 arrest [24][25]. Nonetheless, the rheostat model is controversial for many reasons. First, MITF is a downstream target of numerous signaling pathways and is subject to diverse post-translational modifications, which can direct MITF to different sets of target genes that regulate different functions in melanoma, dependent on physiological context [17][19]. Furthermore, findings that proliferative and invasive phenotypes are mutually exclusive has been disputed by Haass et al. (2014) [26]. 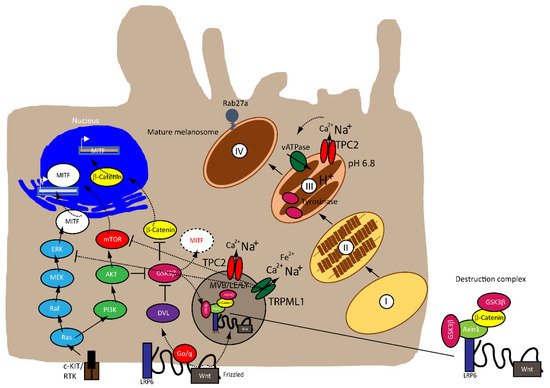 Figure 1. Signaling pathways in melanoma cells involved in MITF regulation and subcellular localization of TRPML1 and TPC2. Several pathways regulate MITF expression: RAS/RAF/MEK/ERK, PI3K/AKT and Wnt/GSK3β/β-Catenin. GSK3β is a negative regulator of MITF expression and promotes proteasomal degradation of MITF. GSK3β degradation in endolysosomes is enhanced by Wnt signaling. Tyrosinase activity depends on melanosomal pH and is regulated by TPC2 activity in melanosomes. Loss-of-function of TPC2 in endolysosomes and melanosomes results in increased GSK3β and decreased MITF protein levels as well as increased tyrosinase activity and melanin content.

The Wnt signaling pathway is divided into canonical β-catenin dependent and non-canonical β-catenin independent branches and is involved in regulating cellular homeostasis and development. Mutations of components of this pathway contribute to a number of pathologies, including familial exudative vitreoretinopathy, tooth development defects, Robinow syndrome, bone density defects, Alzheimer’s disease, and different types of cancers, such as melanoma, hepatocellular carcinoma (HCC), ovarian cancer, breast cancer and prostate cancer [32][33][34][35]. In melanoma, aberrations of the canonical Wnt pathway are directly linked to MITF and the rheostat model described above. The key player is β-catenin, which regulates genes of the melanocyte lineages and facilitates early-stage melanocyte transformation by blocking cellular senescence and increased proliferation. In melanoma cells, β-catenin activates proteins involved in melanogenesis and pigmentation such Melan-A, dopachrome tautomerase (DCT) and tyrosinase, all through MITF [34][36][37][38]. 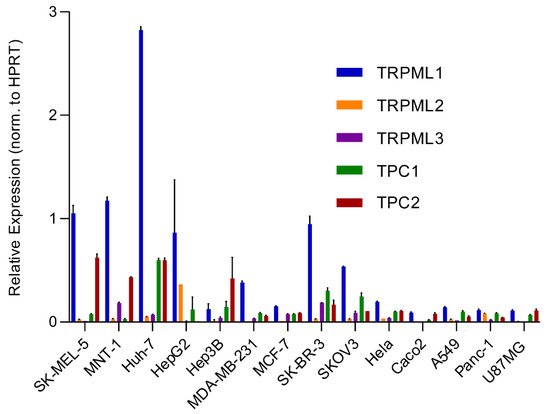 Besides the involvement of MAPK and Wnt/ GSK3β/β-Catenin pathways described above, melanin formation is also triggered by melanocyte-stimulating hormone (MSH), a peptide hormone encoded by the proopiomelancortin gene (POMC). MSH binding to MC1R results in the induction of MITF via the cAMP response element-binding protein (CREB). In the TPC2 −/− MNT-1 cells, the expression levels of ERK, AKT, and CREB were found to be unchanged while the expression of GSK3β was increased [40]. It was thus concluded that the increased level of GSK3β results in reduced degradation of the GSK3β containing destruction complexes in endolysosomes, leading to increased GSK3β-dependent MITF degradation. These findings were recapitulated in MNT-1 cells treated with blockers for TPC2 [41] and it was found that flavonoid blockers of TPC2, such as naringenin [42], pratensein or duartin [41] like genetic loss of TPC2, increases melanin content and decreases proliferation, migration and invasion in a TPC2 dependent manner. In TPC2 −/− cells, no significant effects of the compounds were seen. In sum, Netcharoensirisuk et al. (2021) concluded that melanoma cell proliferation, migration and invasion are inversely correlated with TPC2-dependent melanin production in MNT-1 cells as the reduction of TPC2 expression increases melanin content but decreases proliferation, migration and invasion. It was suggested that this is the consequence of independent mechanisms: the regulation of MITF protein levels through interference with the endolysosomal activity of TPC2 and endolysosomal GSK3β degradation on the one hand and, on the other hand, the regulation of tyrosinase activity in melanosomes, independent of MITF by indirect interference with the melanosomal proton pump activity (decreased driving force for the pump due to absent or reduced TPC2 activity, resulting in reduced proton uptake by melanosomes, leading to less acidic melanosomal pH, increased tyrosinase activity, and eventually increased melanin production).

Clearly, this dual activity of TPC2 in melanosomes and endolysosomes is a special feature for TPC2 in melanoma cells, which requires further attention to understand its full potential as a possible drug target to treat melanoma.

More
© Text is available under the terms and conditions of the Creative Commons Attribution (CC BY) license (http://creativecommons.org/licenses/by/4.0/)
Upload a video for this entry
Information
Subjects: Biochemistry & Molecular Biology
Contributor MDPI registered users' name will be linked to their SciProfiles pages. To register with us, please refer to https://encyclopedia.pub/register :
Carla Abrahamian
View Times: 75
Revisions: 2 times (View History)
Update Time: 13 Aug 2021
Table of Contents
1000/1000
Hot Most Recent