Submitted Successfully!
Thank you for your contribution! You can also upload a video entry related to this topic through the link below:
https://encyclopedia.pub/user/video_add?id=13
Check Note
2000/2000
DEA Banking Efficiency: Macroprudential Context
Edit
Upload a video

China is a bank-dominated country; therefore, the sustainability of the Chinese banking industry is important for economic development. In this paper, data envelopment analysis (DEA) was combined with the Malmquist index, and we statically and dynamically analyzed the efficiency of listed banks during the period 2012–2017. The results showed that 12 of the 17 banks improved their technical efficiency. The technical efficiency of three banks remained the same, whilst that of two banks had dropped slightly by less than 1.0%. The Chinese government has learned from the lessons of past financial crises to find a way to forestall financial crisis, and implemented macroprudential policy, therefore the banking industry has actively served the real economy and promoted economic development while paying attention to the prevention of financial risks. According to the report of The Banker in 2018, for the first time, the four biggest banks in China topped the list of the Top 1000 World Banks. The research showed that, the Chinese government applied macroprudential framework in the banking supervision, and the listed banks effectively resisted financial risks and realized steady growth. We believe that the macroprudential framework plays a positive role in the economic development and financial stability in China.

Finance is the core element of the modern economy. As a bank-dominated country, it is important for the national economy to achieve sustainable and healthy development of the Chinese banking industry. Therefore, the Chinese government has been paying significant attention to policy making and planning of the banking industry. In 2012, the former Chinese president Hu Jingtao pointed out that the Chinese government was going to enhance financial supervision and improve the competitiveness of financial institutions, including banks [1]. In the following year, the report on the work of the government also underlined the importance of improving the competitiveness of banks [2]. Recently, the five-year plan (2016–2020) stressed that the government should accelerate financial reform, enhance the efficiency of finance in serving the real economy, and improve the service quality and management levels of financial institutions [3]. In 2017, Chinese president Xi Jinping pointed out that the Chinese economy has been transitioning from a stage of rapid growth to an era of high-quality growth, which means that China will pursue an economy with better quality, higher efficiency, and an increased total factor of productivity. In addition, the reform of the financial system should be strengthened in order to serve the real economy better, and the financial supervision framework should be enhanced to forestall financial risks [4].

In 2008, the global financial crisis caused by the subprime mortgage crisis in the United States severely damaged the global financial system. At the annual meeting of the World Economic Forum held in January 2017, Chinese president Xi Jinping emphasized that the extravagant profit-seeking behaviours of the financial capital, as well as the serious lack of financial supervision, caused the global financial crisis. Therefore, we need to strengthen the ability of financial markets to resist risks [5]. Researchers found that the lack of effective macroprudential concept was an important reason for the crisis [6][7]. Over the years, international organizations, regulatory authorities of various countries, and academics have begun to pay more attention to the development of the theory and practice of constructing a macroprudential framework, and there is an international consensus on strengthening financial supervision and preventing risks [7][8].

At present, the direction of financial supervision is shifting from microprudential policy to a combination of microprudential and macroprudential policies. For instance, Basel III emphasizes the concept of macroprudential supervision. According to the development and changes of the economic and financial situation, the People's Bank of China, being the central bank of China, has continuously improved the macroprudential policy framework and constructed the Macro Prudential Assessment (MPA) system in 2016. The MPA system supervises the financial institutions in terms of capital and leverage, assets and liabilities, liquidity, pricing behavior, asset quality, cross-border financing risk, and the implementation of credit policy. Since the first quarter of 2017, the central bank incorporated off-balance-sheet financing into broad credit indicators for MPA. Moreover, in the report of the 19th National Congress of the Communist Party of China (CPC) in October 2017, it was formally put forward that macroprudential policy and monetary policy should be the two pillars of the regulatory framework of the financial system [4].

Benefiting from the deepening of reforms and the improvement of policy frameworks, China's banking industry has achieved steady growth, even in the post-crisis period. According to the statistics disclosed by the China Banking Regulatory Commission (CBRC), the total assets of China's Banking Financial Institutions (BFC) increased from 128.5455 trillion yuan to 252.4040 trillion yuan during the period from 2012–2017, with an average growth rate of 11.90%. Additionally, the number of employees who work in the BFC grew from 3,362,000 in 2012 to 4,090,000 in 2016. However, whether the efficiency of the banking industry is growing along with the rapid growth of the industry has become a focus of public attention. Moreover, whether a bank operates efficiently is associated with the sustainability of the bank. Additionally, as mentioned above, the sustainable development of the banking industry, especially in China, is important for economic growth as the banking industry could affect many other industries. In addition, according to Reference [15], most research focuses on the efficiency of banks in developed countries. However, development of the banking industry is not the same in developed countries and in developing countries. Therefore, research on the banking industry in developing countries will be quite interesting. Moreover, the studies will be of importance as China plays a more important role in the development of the global economy [16][17][18]. In all, our study concerning Chinese banks will fill the gap in previous studies. Furthermore, the DEA-based efficiency evaluation based on the latest data can depict the status quo of the banking industry in China well.

To accurately and comprehensively measure bank efficiency, we review the related literatures which have evaluated banking efficiency in different ways. Some research concentrated on measuring the efficiency of a bank and compared the performance of different banks through statistical analysis using accounting ratios. However, the traditional measure of efficiency using a single input and output cannot fully evaluate the performance of banks. Moreover, the evaluation based on accounting indicators may aggregate the performance of a bank in certain perspectives [19][20][21]. Therefore, we aim to measure the efficiency of a bank with multi-inputs and outputs efficiently, and we have found that data envelopment analysis is suitable for our research. Data envelopment analysis (DEA) is an efficient way to measure the relative efficiency of a decision-making unit (DMU), in comparison to the best performer in the sample. Additionally, DEA is suitable for analyzing the efficiency of DMUs with multi-inputs and outputs which can comprehensively depict performance. In addition, we do not need to preassign the form of the production function. More importantly, the combination of DEA and the Malmquist index model contributes to the dynamic analysis of the efficiency of DMUs [22][23][24].

In this paper, to consider the accuracy, consistency, and accessibility of data, the commercial banks listed in the Chinese A-share stock markets were chosen as our research object. By the end of 31 December 2017, there were 25 banks listed on the A-share stock market according to the industrial classification of listed companies. Moreover, we excluded firms with data which was not publicly disclosed in the sample period, and 17 firms were subsequently selected as the sample. The financial figures of the listed firms were manually collected from the publicly-disclosed financial reports over the period of 2012–2017. 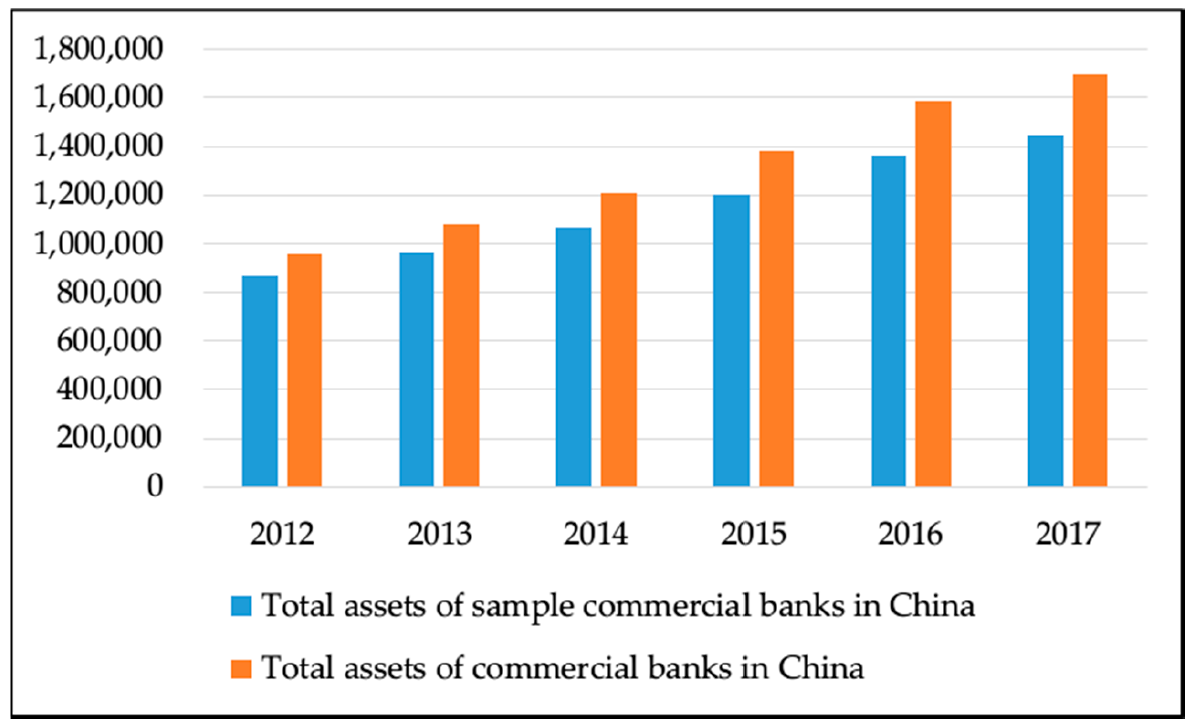 The rest of the paper is organized as follows. The next section introduces the methodology of the measurement of bank efficiency and shows the sample and the variable selection. In Section 3, we describe the data. Then, we make an efficiency evaluation of the banking industry, statically and dynamically. Additionally, we classify the banks by their ownership types and analyze bank efficiency in detail. Section 4 discusses the results and conclusions.

In this paper, we collected the data of seventeen listed commercial banks, which covered more than 80% of the total assets of the Chinese banking industry, showing good representativeness. Firstly, we evaluated the technical efficiency and calculated the Malmquist total factor productivity of the banks during the period from 2012–2017, based on the methodology of the DEA model and Malmquist index model. Secondly, the decomposition of the Malmquist index provided a useful way to see the technical change and the change in efficiency of the banks during the sample period. Moreover, we subdivided the banking industry according to the ownership types of the banks, analyzed the changes of the banks' efficiency, and conducted the efficiency comparison.

In summary, since the global financial crisis and the European debt crisis, the global economy has been recovering slowly, and the volatility of the financial markets has intensified. The Chinese government responded to the crisis actively and implemented macroprudential policy. The Chinese banking industry actively served the real economy and promoted the development of the national economy, whilst paying attention to the prevention of financial risks. As mentioned above, all the banks in the sample suffered from the negative technical progress of different extents; however, we observed the growth of both pure technical efficiency and scale efficiency, which contributed to the development of the industry. In addition, we found that banks of different ownership types showed their own characteristics. Moreover, we found that, in terms of the six-year average technical efficiency, the joint-stock banks performed the best, which was consistent with the study of Zhang [23]. However, our study also showed that the technical efficiency of the three types of banks was stable and the efficiency gaps between banks of different types were small, which was different from Zhang [23]. Furthermore, we studied the development of pure technical efficiency and scale efficiency of the three types of banks, which fills the gap in prior studies (e.g., Zhu et al. [32]). For the first time, the four biggest banks in China topped the list of the Top 1000 World Banks released by The Banker in July 2018, and the rankings of GSYH, JSYH, ZGYH and NYYH were 1, 2, 3 and 4. This is a good start for the Chinese banking industry, and it showed the positive influence of macroprudential policy on the sustainability of the Chinese banking industry.

More
©Text is available under the terms and conditions of the Creative Commons-Attribution ShareAlike (CC BY-SA) license; additional terms may apply. By using this site, you agree to the Terms and Conditions and Privacy Policy.
Upload a video for this entry
Information
Subjects: Business, Finance
Contributor MDPI registered users' name will be linked to their SciProfiles pages. To register with us, please refer to https://encyclopedia.pub/register :
Huichen Jiang
View Times: 605
Revisions: 13 times (View History)
Update Time: 07 Mar 2021
Table of Contents
1000/1000
Hot Most Recent