Submitted Successfully!
Thank you for your contribution! You can also upload a video entry related to this topic through the link below:
https://encyclopedia.pub/user/video_add?id=12937
Check Note
2000/2000
Polymer Electrolyte Membrane Fuel Cell
Edit
Upload a video
This entry is adapted from 10.3390/en14134048

Polymer electrolyte membrane fuel cells (PEMFCs) have been considered as electric power sources for cars, as well as stationary and portable power sources, due to their high energy efficiency, ease of operation, and environmental friendliness. Furthermore, as a promising power source, integrating PEMFCs into microgrids, which are a common structure in the smart grid framework, has been gaining traction around the world, encouraging the usage of hydrogen energy.

Different methods for assessing the durability of PEMFCs have been developed in the United States, the European Union, Japan, and China. These methods are designed to collect enough data about the cell/stack in order to understand its efficiency and durability before it fails. They also have a method for determining the cell/age, and stacks related to changes in cell/stack performance over time [1]. According to the US Department of Energy, a metric is used until the cell/stack either accumulates a certain number of cycles or fails to meet a performance criterion, such as a cumulative 20% decline in power or a 10% loss of average cell voltage from initial voltage under cycling conditions [2][1][3].

Methods to evaluate the durability of PEMFC cell/stacks for automotive applications have been suggested by institutions and organizations in India, South Korea, and Russia, and more remarkable in the United States, the European Union, Japan, and China [5]. In particular, the Dynamic Stress Test (DST) of the U.S. Department of Energy (DOE, USA) and the Fuel Cell and Hydrogen Energy Association (FCHEA), the Fuel Cell Technical Team (FCTT) of the U.S. Driving Research and Innovation for Vehicle Efficiency and Energy Sustainability (USDRIVE, USA) Fuel Cell Technical Team, the New European Driving Cycle (NEDC) of the United Nations Economic Commission for Europe (UNECE, EU), the Fuel Cell Testing and Standardization Network (FCTESTNEST) of the International Electrotechnical Commission (IEC, EU) and Fuel Cell Testing and Standardization Network (FC TestNet), the Giantleap of the Fuel Cell and Hydrogen Joint Undertaking, and the JC08 of the Japanese New Energy and Industrial Technology Development Organization (NEDO, Japan), as well as other protocols of Chinese universities, such as those at Tongji University, Tsinghua University, Wuhan University of Technology, and Dalian Institute of Chemical Physics, have been developed.

Dissolution of Pt is accelerated by voltage cycling, which gives rise to a varying load on the fuel cell; in essence, stop-and-go driving experiences of a fuel cell vehicle can typically generate high voltage load [9]. Wang et al. [10] reported that dissolved Pt concentration increased when potentials rose from 0.65 to 1.1 V and then decreased at potentials above 1.1 V. In another publication, Pt dissolution took place as potentials that exceeded 0.9 V because electrochemical oxidation of Pt occurred, and Pt oxide instantly formed on the Pt surface [11].

The durability testing protocols developed or used for single cells or stacks will be summarized in this section for both vehicle and stationary applications.

Fuel cells for transportation applications, especially for automotive propulsion, may have to operate under different operating and cyclical conditions, including temperatures from sub-zero to above the boiling point of water, relative humidity from ambient to saturation, half-cell voltages from 0 to >1.5 volts. Additionally, the operation conditions during the transient and cyclic modes can change relatively quickly, ranging from high to low voltages, temperatures, humidity, and currents to meet the rapid changes in power demand, some of them severe special materials and the stability of the whole fuel cell system [2][15][16]. Institutions and organizations in India, South Korea, and Russia, and especially in the U.S, EU, Japan, and China, have made significant efforts to propose methods to quantify the durability of the PEMFC cell/stack for automobile applications [5].

The DST protocol was developed by the DOE and FCHEA for testing the long-term durability of PEMFC cell/stacks for vehicular applications and comparing cell and stack performance with that specified by the U.S. DOE [17][1][3]. This protocol involves stepping through a series of different current draws typical of vehicle loads based on real power demand from a car during city driving in a typical American urban area [4]. When average voltages are 0.88, 0.80, 0.75, 0.65, and 0.60 V, an initial polarization curve is used to determine current densities, according to the protocol’s guidelines. These current densities are designated C88, C80, C75, C65, and C60, respectively [3]. Figure 1 depicts the stack load period used for fuel cell testing based on the initial stack polarization curve and Table 2 shows the current density/time profile. The cycle includes open circuit voltage (OCV), low current, medium current, and high current (16 steps in total). The first stage (15 s) of each 360-s loop is OCV, as shown in Figure 1 Fuel and oxidant compositions, as well as flow rates, will be calibrated at each current level to represent realistic system conditions over a driving cycle. Except for periodic diagnostic testing, the periods would be continuous. Cell resistance and hydrogen crossover, shorting resistance, and a constant-stoichiometry polarization curve would be among the diagnostics. 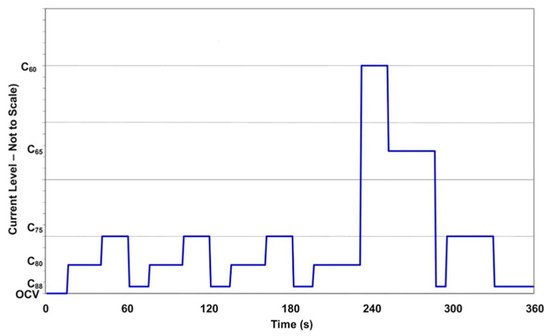 The FCTT proposes two similar-structured cycles for wet and dry conditions [15][1][18]. The quantities of humidification used and the highest current density applied vary. In comparison to the dry cycle, which uses 25% relative humidity and 0.1 A/cm 2 maximum current density, the wet cycle uses 92% relative humidity and a higher maximum current density, 1.2 A/cm 2. The membrane hydration in the dry protocol is dependent on the PEMFC’s self-humidification due to the lower relative humidity. FCTT’s duty cycle profile is depicted in Figure 2 . The PEMFC stack, as shown in Figure 2 , works on a 60 s cycle, alternating between 30 s of idling and 30 s of full power. In the wet process, two load steps of 0.02 A/cm 2 and 1.2 A/cm 2 are fixed, while gas dew point temperatures are set at 83 °C. The load is set at 0.02 A/cm 2 and 0.1 A/cm 2 in the dry cycle, and the gas dew point temperatures are set at 53 °C. The stack temperature in these two procedures is 80 °C, and the gas stoichiometry remains constant throughout. 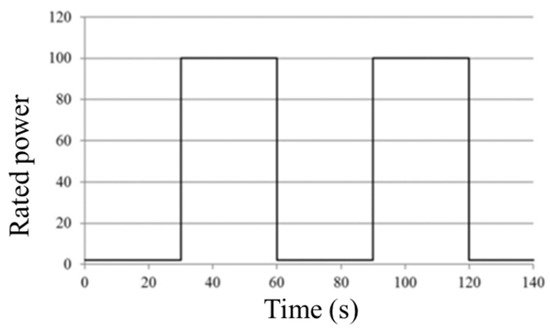 One of the most significant barriers to fuel cell commercialization is durability, as discussed in this review article. We present some of the most important factors influencing the long-term durability of PEMFCs in this study. Degradation of PEMFC materials, operating conditions, water control, and thermal management are among these factors. We discuss PEMFC durability test protocols for transportation applications developed by leading organizations, institutes, and universities around the world, such as the DOE, FCHEA, USDRIVE, UNECE, FC TestNet, IEC, and Japanese NEDO and Chinese universities including Tongji University, Tsinghua University, Wuhan University of Technology, and the Dalian Institute of Chemical Physics. These protocols were created to mimic real-world driving situations. However, they are not meant to be comprehensive for all driving situations encountered in the real world, such as long periods of idling due to traffic jams, etc. Researchers must make adjustments to adapt current operating conditions to test objectives. In addition, the protocols for reliability testing PEMFC stationary applications are briefly discussed. We hope that the results of this research will help to speed up the commercialization of PEMFCs.

More
© Text is available under the terms and conditions of the Creative Commons Attribution (CC BY) license (http://creativecommons.org/licenses/by/4.0/)
Upload a video for this entry
Information
Subjects: Polymer Science
Contributor MDPI registered users' name will be linked to their SciProfiles pages. To register with us, please refer to https://encyclopedia.pub/register :
Sangseok Yu
View Times: 110
Revisions: 2 times (View History)
Update Time: 09 Aug 2021
Table of Contents
1000/1000
Hot Most Recent