Submitted Successfully!
Thank you for your contribution! You can also upload a video entry related to this topic through the link below:
https://encyclopedia.pub/user/video_add?id=12765
Check Note
2000/2000
CRISPR-Cas9 in Fruit and Vegetable
Edit
Upload a video
This entry is adapted from 10.3390/horticulturae7070193

Fruit and vegetable crops are rich in dietary fibre, vitamins and minerals, which are vital to human health. However, many biotic stressors (such as pests and diseases) and abiotic stressors threaten crop growth, quality, and yield. Traditional breeding strategies for improving crop traits include a series of backcrosses and selection to introduce beneficial traits into fine germplasm, this process is slow and resource-intensive. The new breeding technique known as clustered regularly interspaced short palindromic repeats (CRISPR)-CRISPR-associated protein-9 (Cas9) has the potential to improve many traits rapidly and accurately, such as yield, quality, disease resistance, abiotic stress tolerance, and nutritional aspects in crops. Because of its simple operation and high mutation efficiency, this system has been applied to obtain new germplasm resources via gene-directed mutation.

1. The Discovery and Development of CRISPR Technology

CRISPR-associated (Cas) genes were first discovered in the Escherichia coli genome in 1987 and were officially named by the Dutch scientist who identified them [1]. In 2005, it was discovered that many CRISPR spacers consist of short sequences that are highly homologous with sequences originating from extrachromosomal DNA. The Cas-encoded protein can combine with the CRISPR transcription products and with the homologous foreign DNA sequences to form a protein–RNA complex, which can cut the foreign DNA fragments. The primary function of the CRISPR complex in bacteria and archaea is to integrate specific fragments of exogenous DNA (from invading phages or other sources) into their own genomes to become interval sequences. During subsequent invasion by foreign DNA, the specific recognition system is then activated, providing an acquired immune defence function [2][3][4].

CRISPR-Cas technology has been successfully applied to the editing of human, animal, and plant genomes, and has been developed for use in drug screening, animal domestication, and food science research [5][6][7]. There are three main types of CRISPR-Cas systems. Types I and III use a large multi-Cas protein complex for interference [8]. Type II requires only a simple effector-module architecture to accomplish interference via its two signature nuclease domains, RuvC and HNH [9]. Among various CRISPR nucleases, type II Cas9 from Streptococcus pyogenes (SpCas9) is the most widely used in CRISPR-Cas technology [10]. The sgRNA-Cas complex recognises the protospacer adjacent motif (PAM) and Cas9 cleaves the target DNA to generate a double-strand break (DSB), triggering cellular DNA repair mechanisms (Figure 1). In eukaryotes, DSBs have two main repair mechanisms. The first is nonhomologous end joining (NHEJ). In the absence of a homologous repair template, the NHEJ repair pathway is activated at the DSB site, thus disrupting gene function. The second is homology directed repair (HDR). If a donor DNA template homologous to the sequence surrounding the DSB site is available, the HDR pathway is initiated, precisely introducing specific mutations such as insertion or replacement of desired sequences into the break sites [11]. Using a donor DNA as a template, gene targeting (GT) can precisely modify a target locus to repair DNA DSBs. 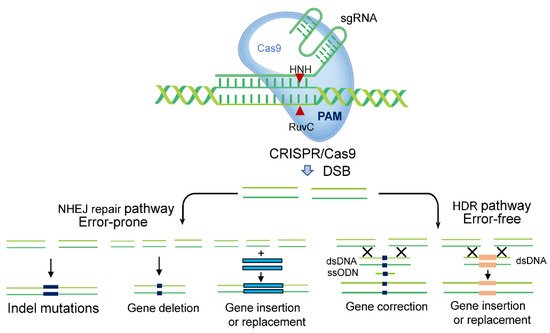 Several strategies are used to improve the homologous recombination frequency between a genomic target and an exogenous homologous template donor. Most of the strategies focus on enhancing the number of donor repair templates using virus replicons [12], suppressing the NHEJ pathway [13], and timing DSB induction at target sites to coincide with donor repair template delivery in plant cells [14]. Finally, the recombination frequency can be enhanced by treatment with Rad51-stimulatory compound1 (RS-1) [15].

In 2014, CRSPR-Cas9 was used to create the first needle-leaf mutant in tomato, by knocking out Argonaute 7 [16]. Many studies have since been published on its possible applications in protecting plants against biotic and abiotic stresses, and improving fruit quality, plant architecture, and shelf life [17]. Currently, the system is in the research stage for many fruits and vegetables crops, such as cabbage, mustard, tomato, and watermelon.

Most gene-editing studies have evaluated mutation efficiency in terms of the number of albino plants obtained after mutation of the endogenous phytoene desaturase (PDS) gene. The disruption of PDS impairs the production of chlorophyll and carotenoid, generating an easily identifiable albinism phenotype in plants. However, the products of gene editing obtained in this way have no economic value [18][19][20]. Because of its high economic value and the availability of Agrobacterium-mediated transformation, tomato has become a model crop for testing CRISPR-Cas9 applications (Figure 2). 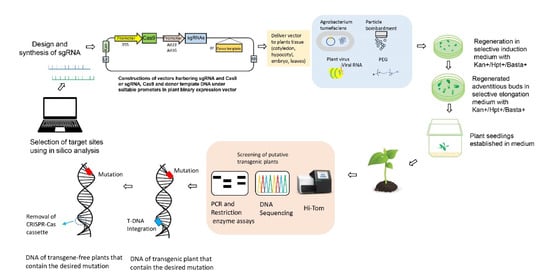 Two strategies have been used to improve plant resistance to viruses: (1) designing sgRNAs and targeting the virus genome; or (2), modifying the fruit crop genes in the antiviral pathway. The binding of virus genome linked protein (VPg) to the plant protein ‘eukaryotic translation initiation factor 4E’ (eIF4E) is key in Y virus infection of plants. Mutation of a key site of eIF4E can affect the virus–plant interaction, and mediate plant resistance to this virus [21]. In cucumbers, using CRISPR-Cas to target the N′ and C′ ends of eIF4E-produced nontransgenic homozygous plants in the T3 generation; these showed immunity to cucumber vein yellow virus and pumpkin mosaic virus, and resistance to papaya ring spot mosaic virus (PRSV-W) [22].

Fungi cause many diseases, potentially causing severe losses in crop yield and quality. For instance, downy and powdery mildews cause serious economic losses in tomato [25]. Arabidopsis thaliana DMR6 (down mildew resistant) is a member of the 2-oxoglutarate oxygenase Fe(II)-dependent superfamily and is involved in salicylic acid homeostasis. Overexpression of DMR6 in plants can reduce susceptibility to downy mildew [26]. The DMR6 mutation obtained using CRISPR-Cas9 to knock out the homologous genes in tomato showed resistance to Pseudomonas syringae, Phytophthora and Xanthomonas spp. [27]. Mlo1 (Mildew resistant locus 1) encodes a membrane-associated protein and is a powdery mildew disease-sensitivity gene. In tomato, Mlo1 mutants obtained via gene editing exhibited resistance to the powdery mildew Oidium neolycopersici. Further, a mutant free of mlo1 T-DNA was obtained by selfing T0 generation plants [28].

The fungal pathogen Fusarium oxysporum can cause Fusarium wilt disease in fruit and vegetable crops [29]. In tomatoes, Solyc08g075770-knockout via CRISPR-Cas9 resulted in sensitivity to Fusarium wilt disease [30]. In watermelons, the knockout of Clpsk1, encoding the Phytosulfokine (PSK) precursor, confers enhanced resistance to Fusarium oxysporum f.sp.niveum (FON) [31]. Botrytis cinerea, an airborne plant pathogen that infects fruit and vegetable crops, causes great economic losses. Its initial symptoms are not obvious, and the lack of effective pesticides makes its prevention and control difficult. Pathogens can be effectively controlled in crops by the use of genetic resources that convey heritable resistance. In tomatoes, mutations in MAPK3 (mitogen-activated protein kinase 3) produced using CRISPR-Cas9 induce resistance to Botrytis cinerea [32].

With climate change, crop production is exposed to increased potential risks of abiotic stress. Although traditional breeding can to some extent ensure stable crop production, the application of new technologies to rapidly obtain new crop germplasm resources capable of responding to abiotic stress is essential for accelerating the cultivation of new varieties [34]. The emergence of CRISPR-Cas9 gene editing has shortened the time required to create new varieties. Brassinazole-resistant 1 gene (BZR1) participates in various brassinosteroid (BR) mediated development processes. The CRISPR mediated mutation in BZR1 impaired the induction of RESPIRATORY BURST OXIDASE HOMOLOG1(RBOH1) and the production of H2O2. Exogenous H2O2 recovered the heat tolerance in tomato bzr1 mutant [35]. Further, new cold- and drought-tolerant germplasms can be created using gene-editing, for instance, of CBF1 (C-repeat binding factor 1), which regulates cold tolerance in plants, and MAPK3, which participates in the drought stress response to protect plant cell membranes from peroxidative damage in tomatoes [36][37].

Weeds are an important cause of stress that affect vegetable yield and quality, and selective herbicides are often used to control weed growth during cultivation. To obtain herbicide-resistant fruits and vegetables for field production, CRISPR-Cas9 gene editing was used for site-directed mutagenesis of the herbicide target gene acetolactate synthase (ALS) in watermelon, yielding a herbicide-resistant watermelon germplasm [38]. Cytidine base editing (CBE) was used for cytidine editing of key ALS sites in tomato and potato, resulting in amino acid mutations. Up to 71% of edited tomato plants exhibited resistance to the pesticide chlorsulfuron, and of the edited tomato and potato plants, 12% and 10%, respectively, were free of GM components [39]. Phelipanche aegyptiaca, an obligate weedy plant parasite, requires the host roots to release the plant hormone strigolactone (SL) to promote seed germination; CRISPR-Cas9 was used to mutate carotenoid dioxygenase 8 (CCD8), a key enzyme in the carotenoid synthesis pathway that produces SLs in tomato, and More Axillary Growth1 (MAX1), which is involved in the synthesis of SLs, thereby significantly reducing SL content, and creating P. aegyptiaca-resistant tomato plants [40][41].

The primary goal in fruit and vegetable breeding is to improve quality and prolong shelf life after harvest. Quality refers to both external and internal factors. External quality refers to fruit size, colour, and texture, which can be discerned by the naked eye. Internal quality must be measured using equipment, and includes the levels of nutrients such as sugars, vitamins, and bioactive compounds including lycopene, anthocyanins, and malate. For example, in tomato, the ovary locule number, which determines 50% of the genetic variation in fruit size, is determined by multiple QTLs [42]. Researchers at Cold Spring Harbor Laboratory designed eight sgRNAs and used CRISPR-Cas9 to edit the promoter region of the tomato CLAVATA-WUSCHEL (CLV-WUS) stem cell gene CLV3 to obtain fruits that are larger and more numerous than wild-type fruits [43]; editing of fruit-size determining QTLs, such as the QTLs for locule number (lc) and fasciated number (fas), generated germplasm resources with an increased number of locules [44].

Fruit and vegetable colour and texture are important traits for consumers. For example, European and American consumers prefer red tomatoes, whereas Asian consumers prefer pink tomatoes [45][46]. CRISPR-Cas was used to modify phytoene synthase 1 (PSY1), MYB transcription factor 12 (MYB12), and anthocyanin 2 (ANT2) to obtain yellow, pink, and purple tomatoes, respectively [47][48][49]. The carotenoid isomerase gene of Chinese kale (BoaCRTISO) is responsible for catalysis, then conversion of lycopene precursors to lycopene. When BoaCRTISO was targeted and edited, the colour of mutants changed from green to yellow [50]. The primary goal of improving the intrinsic quality of fruits and vegetables is to improve their nutrient and bioactive compound content. Carbohydrates and vitamins are essential nutrients. Many genes are involved in the synthesis and metabolism of sucrose and carotenoids. One of the carotenoids, provitamin A, can be absorbed by the human body and converted into vitamin A. For example, CRISPR-Cas was used to knock out MPK20 (mitogen-activated protein kinase 20), blocking the transcription and protein products of multiple genes in the sucrose metabolism pathway [51]. Biofortification, the biotechnological improvement of the absorption, transport, and metabolism of minerals by plants, increases the levels of micronutrients that are beneficial to human health; long-term consumption of these micronutrients can effectively prevent cardiovascular disease and cancer [52].

CRISPR-Cas9 can also be used to reduce the content of substances in vegetables that are not conducive to human health, by targeting mutations that inactivate genes in biosynthetic pathways. In potato tubers, for example, excessive content of steroidal glycoalkaloids (SGAs), such as α-solanine and α-chaconine, affects their taste and makes them less safe for human consumption, hence low content is an indicator of high quality. CRISPR-Cas9 was used to delete St16DOX (steroid 16α-hydroxylase) in the potato SGA biosynthetic pathway, resulting in SGA-free potato lines [57].

More
© Text is available under the terms and conditions of the Creative Commons Attribution (CC BY) license (http://creativecommons.org/licenses/by/4.0/)
Upload a video for this entry
Information
Subjects: Genetics & Heredity
Contributor MDPI registered users' name will be linked to their SciProfiles pages. To register with us, please refer to https://encyclopedia.pub/register :
Lili Wan
View Times: 52
Revisions: 2 times (View History)
Update Time: 04 Aug 2021
Table of Contents
1000/1000
Hot Most Recent