Submitted Successfully!
Thank you for your contribution! You can also upload a video entry related to this topic through the link below:
https://encyclopedia.pub/user/video_add?id=12639
Check Note
2000/2000
Cow With/Without Calving Assistance
Edit
Upload a video
This entry is adapted from 10.3390/agriculture11080722

There has been increased interest in the care and housing of cows with concerns for cow welfare given the increasing size of the average dairy herd across developed countries. Animal welfare concerns are commonly directed at farm animals, and in particular housed and more intensive production systems with large numbers of animals. With larger herds the expectation is often that each dairy stockperson will look after more animals as farms either seek to reduce labor costs or find it difficult to source skilled labor.

Close monitoring at calving is required by the stockperson to ensure the survival of the mother and her offspring, with problems potentially impacting on future lifetime performance. While some idea of expected calving date is often known, or estimated from time of insemination and gestation length, this estimate is often imprecise and requires some subjective judgement by the farmer with regular checks during late pregnancy to ensure a successful outcome for the mother and offspring. To assist a stockperson at calving, and given the importance of a successful birth and potential need for intervention, a number of sensor technologies have been developed. These technologies have largely been based on accelerometers and movement detection [1][2], or an alternative is computer vision [3][4], which have been developed to support farm management and improve animal health and wellbeing, and ultimately productivity. The frequency of lying, standing and tail movements of an animal have been found to change in the period prior to calving in both dairy [5] and beef cattle [6], and may give some indication of the need for assistance. Dystocia is fairly common in dairy cows and is a major cause of calf mortality [7][8]. Barrier et al. [8] found that calves which survived dystocia had poorer welfare in the neonatal period and possibly beyond, with lower passive immunity transfer, higher mortality and higher indicators of physiological stress. Although preventing dystocia is close to impossible, quick and timely intervention will help avoid the risk of poor health outcomes. Individual evaluation and continuous monitoring of dairy cows around the time of calving is important to identify any need for intervention or health problems as early as possible. The impact on lifetime performance and labor cost is estimated to range from £110 to £400 per assisted calving [9].

Of the 35 calvings, there were four primiparous and four multiparous calvings that required assistance by the farm stockperson, with all other calvings being unassisted. The study found no difference in duration or frequency of behaviors between cows that had an assisted or unassisted calving. Furthermore, there was no difference between primiparous and multiparous cows (Table 1). Differences were found in the duration of behaviors (p < 0.001) with the majority of time spent lying (0.49) or standing (0.35) with other behaviors being 0.04 or less across the 9 h studied (Figure 1). In the final three hours prior to calving, the proportion of time for lying and contractions increased and the time spent standing, drinking and eating decreased (p < 0.001; Table 1 and Figure 2). 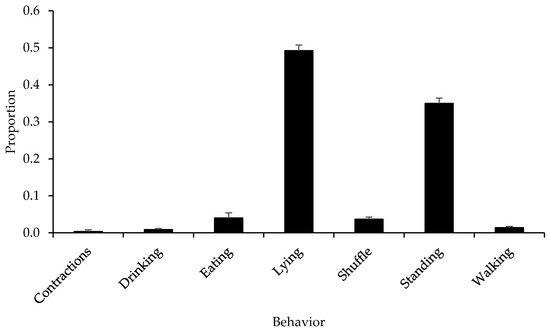 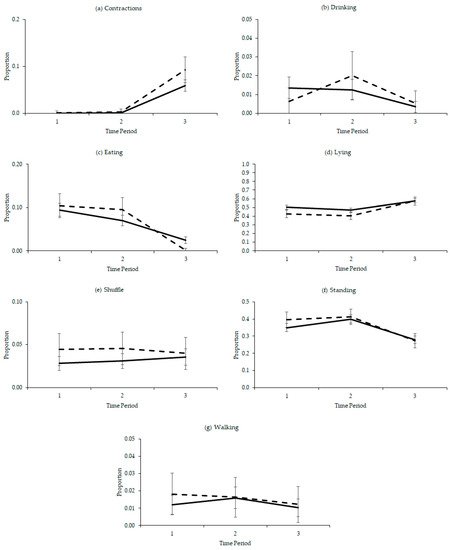 Figure 2. Predicted mean (± SEM) proportion of time that were (a) contractions, (b) drinking, (c) eating, (d) lying, (e) shuffle, (f) standing and (g) walking behavior for assisted (dashed line) or unassisted (solid line) dairy cow calvings (n = 35) in time periods one to three, with period three ending with the birth.
Table 1. Effects of parity, time period and calving assistance on the duration of dairy cow (n = 35) behaviors as a proportion of time.
1 Periods 1, 2 and 3 were observations 7 to 9, 4 to 6 and 1 to 3 h before calving, respectively. 2 Births were either assisted or unassisted by farm staff. 3 Predicted mean values shown in Figure 1. 4 Predicted mean values shown in Figure 2.
Differences were also found in the frequency of behaviors (p < 0.001) with standing (0.36) and shuffle (0.26) being most frequent, with other behaviors being 0.09 or less across the 9 h studied (Figure 3). 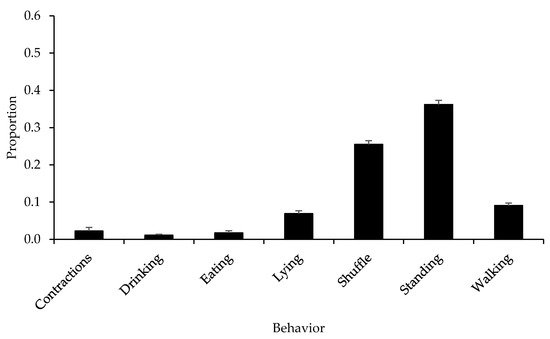 Figure 3. Predicted mean (±SEM) proportion of observations for different dairy cow (n = 35) behaviors during the 9 h prior to calving.
In the final three hours prior to calving, the frequency of lying and contraction bouts increased and the standing, shuffle, walking, drinking and eating bouts decreased (p < 0.001; Table 2 and Figure 4). 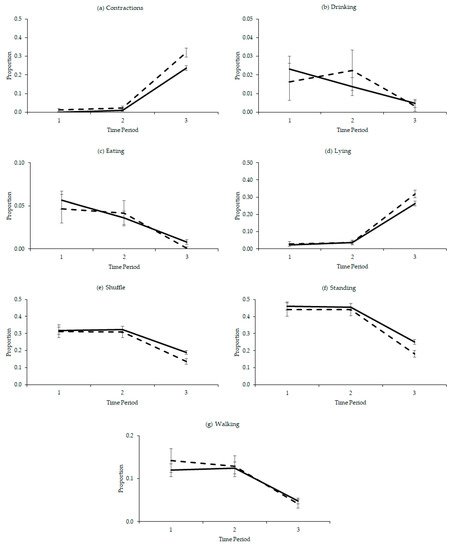 Figure 4. Predicted mean (± SEM) proportion of observations that were (a) contractions, (b) drinking, (c) eating, (d) lying, (e) shuffle, (f) standing and (g) walking behavior for assisted (dashed line) or unassisted (solid line) dairy cow calvings (n = 35) in time periods one to three, with period three ending with the birth.
Table 2. Effects of parity, time period and calving assistance on the frequency of dairy cow (n = 35) behaviors as a proportion of observations.
1 Periods 1, 2 and 3 were observations 7 to 9, 4 to 6 and 1 to 3 h before calving, respectively. 2 Births were either assisted or unassisted by farm staff. 3 Predicted mean values shown in Figure 3. 4 Predicted mean values shown in Figure 4.

This study found that when monitoring calving the duration and frequency of lying and contraction bouts increased in the last three hours prior to birth compared to other time periods studied. Observing contractions and their increased frequency, along with increased frequency and time spent lying, can be used as indicators of progress in parturition. During the nine hours studied prior to calving, cows spent a large proportion of their time either lying or standing in their late pregnancy. No difference in behavioral patterns were found between assisted and unassisted calvings in the current study, but have been found by others [5][10]. The failure to find a difference between assisted and unassisted calvings may have been influenced by observations being conducted until the calf was fully expelled and any assistance being subjectively determined by farm staff. Additionally, only 23% (8 of the 35 cows) in the current study needed assistance when calving, and therefore further observations of assisted births would add to the study.
Cows tend to be lying when contractions are occurring. The behavior of dairy cows has been heavily researched due to concerns to dairy cow welfare and as an indicator of poor health [11]. Lying is a highly motivated behavior in dairy cows, with cows prioritizing lying over other behaviors such as feeding, and especially after a period when these behaviors have been limited [11]. Typically, cows when indoors will spend between 10–12 h per day lying, and between eight and 10 h per day when grazing [12]. The difference may reflect more time needed for eating and walking when at pasture. In the current study cows spent about 12 h per day lying and eight hours standing, with more time spent lying and less time standing, drinking and eating as parturition progressed. Miedema et al. [5] found the frequencies of lying and tail raising increased in the final six-hours before calving and that changes in standing and lying could potentially be used as a predictor of calving. The findings of the current study would also support the use of lying and standing transitions as a means for farmers and technology to detect the progress of parturition and imminent birth. Giaretta et al. [2] also found increased tail movements as an important indicator of calving progress, along with decreased eating behavior and rumination time. Further behaviors such as tail movements and rumination time may have added to the current study since they are potentially visible on video footage.
Schuenemann et al. [10] suggested that dystocic births are characterized by an increase in abdominal contractions for around 95 min until intervention is required. Therefore, if contractions can be tracked accurately, and potentially with technology, a prediction of dystocia could potentially be made given its importance in the monitoring of parturition. Electronic devices such as abdominal belts or intravaginal thermometers to detect uterine contractions and body temperature changes have been proposed as potential solutions [1][2]. Furthermore, the live video feed could be monitored using camera surveillance software to track individual cow behavior since the cows are often indoors when calving [3][4]. Several studies have proposed sensor technology for classifying cow behavior [13][14][15]. During the study, changes in behavior were largely associated with standing, shuffle, walking and lying, with bouts of lying increasing in the period prior to calving, which is consistent with other studies [16]. This potential restlessness is known to relate to discomfort in animals and may reflect late stages of pregnancy or boredom [17].