Submitted Successfully!
Thank you for your contribution! You can also upload a video entry related to this topic through the link below:
https://encyclopedia.pub/user/video_add?id=12618
Check Note
2000/2000
Cyanidin-3-Glucoside
Edit
This entry is adapted from 10.3390/antiox8100479

Cyanidin-3-glucoside (C3G) is a well-known natural anthocyanin and possesses antioxidant and anti-inflammatory properties. The catabolism of C3G in the gastrointestinal tract could produce bioactive phenolic metabolites, such as protocatechuic acid, phloroglucinaldehyde, vanillic acid, and ferulic acid, which enhance C3G bioavailability and contribute to both mucosal barrier and microbiota.

Anthocyanins belong to polyphenols, which are one kind of secondary metabolite with polyphenolic structure widely occurring in plants. They serve as key antioxidants and pigments that contribute to the coloration of flowers and fruits. Although anthocyanins vary in different plants, six anthocyanidins, including pelargonidins, cyanidins, delphinidins, peonidins, petunidins, and malvidins, are considered as the major natural anthocyanidins. Berries, such as red raspberry (Rubus idaeus L.), blue honeysuckle (Lonicera caerulea L.), and mulberry are used as folk medicine traditionally, and their extracts have been used in the treatment of disorders such as cardiovascular disease [1], obesity [2], neurodegeneration [3], liver diseases [4], and cancer [5], in recent years. Cyanidin-3-glucoside (C3G) is one of the most common anthocyanins naturally found in black rice, black bean, purple potato, and many colorful berries. C3G possesses strong antioxidant activity potentially due to the two hydroxyls on the B ring [6], as shown in Figure 1. Recent studies have suggested that C3G potentially exerts functions primarily through C3G metabolites (C3G-Ms) [7], and more than 20 kinds of C3G-Ms have been identified in serum by a pharmacokinetics study in humans [8]. Although the function and mechanism of C3G-Ms are still not clear, protocatechuic acid (PCA) [9][10][11][12], phloroglucinaldehyde (PGA) [1], vanillic acid (VA) [13][14][15], ferulic acid (FA) [16][17][18][19], and their derivates represent the main bioactive metabolites of C3G due to their antioxidant and anti-inflammatory properties. 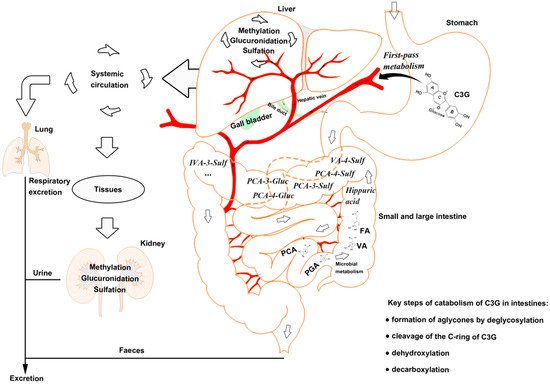 Figure 1. The catabolism process of cyanidin-3-glucoside (C3G) in an organism. C3G can be hydrolyzed to its aglycone by enzymes in the small intestine, and further degraded to phenolic compounds by gut microbiota. Microbial catabolism of C3G in the distal small intestine and large intestine is performed by the cleavage of the heterocyclic flavylium ring (C-ring), followed by dehydroxylation or decarboxylation to form multistage metabolites, which enter the liver and kidney by circulation. C3G, cyanidin-3-glucoside; FA, ferulic acid; PCA, protocatechuic acid; PGA, phloroglucinaldehyde; VA, vanillic acid.

2. Absorption and Catabolism of C3G in the Gastrointestine

Most of the anthocyanins remain stable in the stomach and upper intestine [20][21]. The stomach is considered as one of the predominant sites for anthocyanin and C3G absorption [22][23], although high concentration (85%) of anthocyanins has been found in the distal intestine [24]. There is potential for the first-pass metabolism of C3G in the stomach, that is, C3G can be effectively absorbed from the gastrointestinal tract and undergoes extensive first-pass metabolism, which can enter the systemic circulation as metabolites [25].
Anthocyanins are stable under acidic conditions but extremely unstable under alkaline conditions. The higher the pH is, the more colorless and substituent forms of anthocyanin are predominant [26]. The catabolism of C3G is mainly completed in the distal small intestine, such as ileum [22], and in the upper large intestine, such as the colon [27], with the decomposition by microbiota [28]. C3G can be hydrolyzed to their aglycones by enzymes in the small intestine, and further degraded to phenolic compounds by gut microbiota, in which microbial catabolism of C3G is performed by the cleavage of the heterocyclic flavylium ring (C-ring), followed by dehydroxylation or decarboxylation [29]. Subsequently, phase Ⅱ metabolites and multistage metabolites (including bacterial metabolites) can enter the liver and kidney to form more methylate, gluronide, and sulfate conjugated metabolites by enterohepatic circulation and blood circulation (Figure 1).

Only several C3G-Ms have shown potential biological function, although more than 20 kinds of C3G-Ms have been identified [8][30]. PCA and phloroglucinaldehyde (PGA) are considered as the major bioactive phenolic metabolites produced by phase І metabolism, which undergo cleavage of the C ring of C3G. PCA can increase the antioxidant capacity of cells potentially by increasing the activity of antioxidant enzymes, such as catalase (CAT) in hypertensive rats or arthritis-model rats [31][32], superoxide dismutase (SOD) [33], and glutathione peroxidase (GPx) in mice or macrophages [33][34][35][36], and thus attenuate lipid peroxidation. Meanwhile, PCA has been reported to inhibit the production of inflammatory mediators, such as interleukin (IL)-6, tumor necrosis factor-α (TNF-α), IL-1β, and prostaglandin E2 (PGE2) [37][38][39], potentially by suppressing the activation of nuclear factor-κB (NF-κB) and extracellular signal-regulated kinase (ERK) [33][38] in murine BV2 microglia cells and colitis-model mice. PGA has also shown an inhibitory effect on inflammation potentially by modulating the production of IL-1β, IL-6, and IL-10 [40] in human whole blood cultures, although there are few reports about the molecular mechanisms. Our previous studies have revealed that both PCA and PGA are capable to down-regulate the MAPK pathway, especially suppress the activation of ERK, and PGA can directly bind to ERK1/2 [41] in murine macrophages.
Phase Ⅱ metabolites of C3G, such as PCA-3-glucuronide (PCA-3-Gluc), PCA-4-glucuronide (PCA-4-Gluc), PCA-3-sulfate (PCA-3-Sulf), PCA-4-sulfate (PCA-4-Sulf), VA, VA-4-sulfate (VA-4-Sulf), isovanillic acid (IVA), IVA-3-sulfate (IVA-3-Sulf), and FA, are mostly derived from PCA and PGA [1][8]. VA and FA represent the bioactive phenolic metabolites based on recent studies. VA may suppress the generation of reactive oxygen species (ROS) [42] and lipid peroxidation [32], potentially by increasing the activity of antioxidant enzymes such as SOD, CAT, and GPx [43][44], as well as the level of antioxidants such as vitamin E [43][44], vitamin C [43][44], and glutathione (GSH) [45] in mice, hamster, and diabetic hypertensive rats. Additionally, VA can inhibit the production of pro-inflammatory cytokines such as TNF-α, IL-6, IL-1β, and IL-33 by down-regulating caspase-1 and NF-κB pathways [45][46][47] in mice or mouse peritoneal macrophages and mast cells. FA has also been reported to attenuate both oxidative stress and inflammation potentially by suppressing the production of free radicals (ROS and NO in rats, rat intestinal mucosal IEC-6 cell, or murine macrophages) [48][49][50], enhancing Nrf2 expression and down-stream antioxidant enzymes (SOD and CAT in rats or swiss albino mice) [48][51], and inhibiting the activation of proinflammatory proteins (p38 and IκB in HUVEC cells) [52] and cytokines production, such as IL-18 in HUVEC cells [52], IL-1β in mice [53], IL-6 in obese rats [54], and TNF-α in mice [53]. However, both VA and FA showed a limited effect on the activation of MAPK pathway and production of inflammatory cytokines, such as monocyte chemoattractant protein-1 (MCP-1) and TNF-α in a high-fat diet-induced mouse model of nonalcoholic fatty liver disease [41]. Table 1 summarizes the biological functions of the main bioactive metabolites, including PCA, PGA, VA, and FA.
Table 1. Biological functions of C3G-Ms.
Notes: C3G-Ms, cyanidin-3-glucoside metabolites; CAT, catalase; COX-2, cyclooxygenase-2; ERK, extracellular signal-regulated kinase; FA, ferulic acid; GSH, glutathione; ICAM-1, intercellular adhesion molecule-1; LPS, lipopolysaccharide; MAPKs, mitogen-activated protein kinases; MCP-1, monocyte chemoattractant protein-1; MDA, malondialdehyde; NF-κB, nuclear factor-κB; NO, nitric oxide; PCA, protocatechuic acid; PGA, phloroglucinaldehyde; PGE2, prostaglandin E2; ROS, reactive oxygen species; T-AOC, total antioxidant capacity; VA, vanillic acid; VCAM-1, vascular cell adhesion molecule-1; SOD, superoxide dismutase; TNF-α, tumor necrosis factor-α.

More
© Text is available under the terms and conditions of the Creative Commons Attribution (CC BY) license (http://creativecommons.org/licenses/by/4.0/)
Upload a video for this entry
Information
Subjects: Biology
Contributor MDPI registered users' name will be linked to their SciProfiles pages. To register with us, please refer to https://encyclopedia.pub/register :
Shusong Wu
View Times: 72
Revisions: 2 times (View History)
Update Time: 02 Aug 2021
Table of Contents
1000/1000
Hot Most Recent