Submitted Successfully!
Thank you for your contribution! You can also upload a video entry related to this topic through the link below:
https://encyclopedia.pub/user/video_add?id=12602
Check Note
Maria Pia Ferraz 2021-08-08 23:28:07
Wonderful work. Very nice work.
2000/2000
MALDI–TOF Mass Spectrometry in Microbiology
Edit
This entry is adapted from 10.3390/microorganisms9071539

Mass spectrometry (MS) is an analytical technique that has emerged as a powerful tool in clinical microbiology for identifying peptides and proteins, which makes it a promising tool for microbial identification. Matrix assisted laser desorption ionization–time of flight MS (MALDI–TOF MS) offers a cost- and time-effective alternative to conventional methods, such as bacterial culture and even 16S rRNA gene sequencing, for identifying viruses, bacteria and fungi and detecting virulence factors and mechanisms of resistance.

Mass spectrometry (MS) was originally developed at the end of the 19th century to measure the masses of atoms, and one of its first contributions to science was demonstrating the existence of isotopes, at the beginning of the 20th century [1]. MS is an analytical approach that measures the mass-to-charge ratio (m/z) of chemical compounds and calculates its exact molecular weight. Laser desorption/ionization (LDI), matrix-assisted laser desorption ionization (MALDI) or surface-enhanced laser desorption/ionization (SELDI) as well as electrospray ionization (ESI) are currently the most widely used ionization techniques for analyzing chemical structures in biological systems [2]. In the late 1980s, with the introduction of soft ionization, protein analysis developed rapidly, revolutionizing MS. In the late 1990s, the pioneering application of MS in microbiology [1] demonstrated that intact bacterial cells could be distinguished using MALDI coupled to a time of flight (TOF) analyser [3]. These achievements stimulated the fast development of MALDI–TOF MS system approaches as promising tools for the microbial characterization of bacteria [4], fungi [5], viruses [6], and even nematodes [7].

The MALDI–TOF MS system performs different proteomic strategies using intact or digested proteins. The “top down strategy” is used for direct analysis of intact proteins, proteoforms and post-translational protein modifications [8], whereas the “bottom up” is used for mixtures of peptides derived from protein digestion (i.e., peptide sequencing). MALDI–TOF MS systems represent a basic configuration workflow in a linear mode. Figure 1 presents a schematic overview divided into three compartments: (1) the ionization source system (laser), (2) the mass analyser (TOF), and (3) the ion detector. First, the sample for analysis is prepared by mixing with a matrix, an energy-absorbent, organic compound solution. Then, after the mixture (matrix and sample) crystallize upon drying, the sample is ionized using a laser beam. In the process of desorption and ionization using the ionization source system, the molecules are converted to gas-phase ions and individually charged [M+H]+, so that they can be manipulated by external electric and magnetic fields. MALDI is based on a soft ionization method that preserves the integrity of the sample without massive fragmentation [9]. Soft ionization allows the analysis of proteins and peptides and large organic molecules (i.e., polymers, dendrimers) [10], which tend to become brittle and fragmented in other ionization methods. 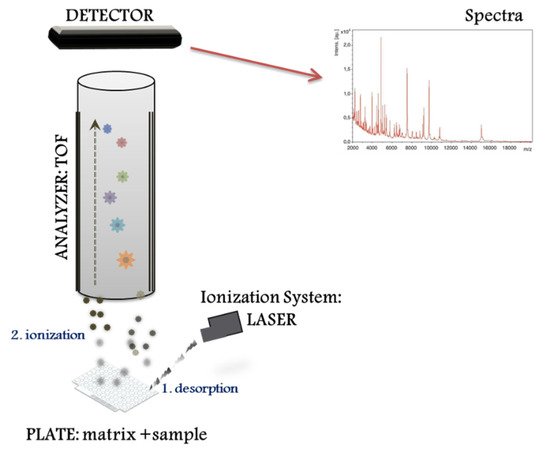 MALDI–TOF MS has recently been used in laboratories for the rapid identification of microorganisms in emergency and inpatients, resulting in shorter hospital stays, particularly in intensive care units [11]. Sepsis is a life-threatening organ dysfunction caused by an unregulated host response to infection [12] and is the major cause of mortality from infectious disease, according to Word Health Organization (https://www.who.int/news-room/fact-sheets/detail/sepsis, accessed on 26 August 2020).

Commercial protocols remain the reference procedures for the extraction of bacterial proteins from direct samples [10][13]. However, more and more modified and in-house methods have emerged to address several fundamental issues related to precision and speed of identification. As discussed in the previous section, sample preparation and an adequate method of protein extraction are key steps that may influence sensitivity, resolution, and reproducibility. Poor sample preparation will lead to lower peak resolution with a consequently lower sensitivity and reproducibility, since ion generation by MALDI–TOF depends on an optimal ratio of matrix substance and analyte [10]. Therefore, it is of the utmost importance to pretreat a sample properly considering that human fluids contain proteins other than bacterial or fungal. These preliminary steps must drain and separate blood and other human cells (i.e., haemoglobin), and selectively recover bacterial proteins [14]; otherwise, a wrong or unknown identification will result.

Microorganism databases are the key component for the identification in MALDI–TOF MS. Proprietary databases (i.e., Bruker) are continuously updated and increasing in size as new microbial species are discovered and new annotations are made. In recent years, open database platforms, spectrum libraries and computer tools have emerged and been made available to the scientific community. Most of them are used to handling long sequences of peptide data [15]. Although, the conventional clinical microbiologist would find working with proprietary programs already in the operating system to be more practical, comfortable and familiar, open-source software platforms, in combination with proprietary ones such as OpenMS [16], allows for additional MS-based workflows and user interfaces that must be considered for clinical diagnoses. The standardization of protocols, the increase in the resources of spectrum libraries and databases, as well as the development of more intuitive computer programs, is allowing the MALDI–TOF system to consolidate itself as the method of choice for microbiological diagnosis [15] (Table 1).
There are two main platforms for commercial use: (1) MALDI BioTyper and (2) VITEK® MS. Both provide a microbial diagnosis based on the detection and identification of low-molecular-weight spectra ranging from 2 to 20 KDa, typically represented by ribosomal proteins and a few housekeeping proteins [17]. They also show high levels of identification at the species level (S ~85%) [18][19] with MALDI BioTyper being better suited for bacteria and yeast [19] and VITEK® MS (v3.0) being better suited for mycobacteria, actinomycetes [19][20][21] and filamentous fungi [22]. The MALDI BioTyper and VITEK® MS platforms include software programs to explore and analyze the acquired mass spectra data. BioTyper and VITEK® platforms are continuously updating their databases with discoveries of new specimens and annotations. These computer programs allow comparison, analysis of spectra clusters for strain classification [23], dendrogram performance, multidimensional analysis [24] and resistance determination using hydrolysis ratios [25][26]. The main difference and limitation between the platforms is in access to other networks or databases, and the resources of their respective computer programs. Despite having private access, BioTyper allows mass spectra and new identifications to be shared among all users.

The increasing amounts of publicly available MS platforms in open access databases, mass spectrum libraries or analytical methods for visualization, standardization and validation [27][28] (Table 1), together with automated colony picking in the laboratory [14], are improving the typing or characterization of strains and identification of microbes.

Other approaches are multidimensional analysis (MDS) or principal component analysis (PCA) (Table 1). MDS and PCA are mathematical approaches that use proximity measures such as the correlation coefficient or Euclidean distance to generate a spatial configuration of points in multidimensional space where distances between points reflect the similarity among isolates. MDS and PCA analyses have been extensively used to discover discriminative peaks [31] and identify potential sets of biomarkers [32][33] in a statistically reliable way [34], as well as distinguish among different strain isolates [33] from a large data set or selected genes or proteins [34][35].

Figure 2 presents a standard MS workflow with the exact identification of proteins and their relative quantification that provides detailed knowledge of protein expression, microorganisms and parasites, and their final integration and interaction in the human body. 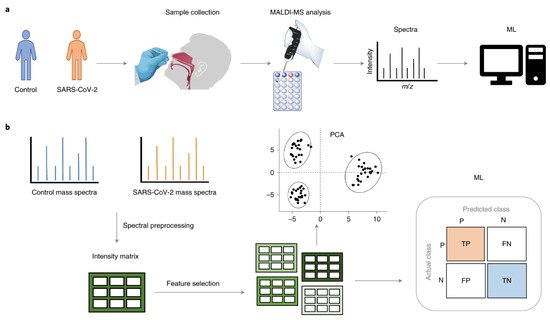 In the recent years, MS has gained importance for characterizing nanoparticles, which has expanded the possibilities of MALDI–TOF MS [37][38][39] in the environmental sciences to study, for example, the distribution, concentration and stability of silver and gold nanoparticles in environmental water [40].

Another MALDI–TOF MS combined approach currently used by few clinical microbiology laboratories is the Fourier Transform Infrared Spectroscopy (FTIRS), uses molecular vibration fingerprints, primarily the C–O stretching of biomacromolecules, to determine the molecular composition of a wide range of sample types [41]. By strain-specific absorbance patterns in the infrared spectrum [42], FTIRS characterizes a microbial sample by reflecting its biomolecular content to correlate with its genetic information [43]. FTIRS has been successfully applied in many studies to discriminate among bacteria at different taxonomic levels, (e.g., serogroup or serotype) and even at the strain level, to provide simple, quick, high-throughput, cost-effective bacterial typing [44][45][46].

During the last decade, MALDI–TOF has found application in biological systems [47] with the incorporation of imaging, the so called Mass Spectrometry Imaging or MALDI imaging [48]. It evolved rapidly and is commonly used in the diagnosis of inflammatory and infectious diseases in human or animal tissues, [49], including samples such as bacterial biofilm [50] or mammalians [51].

More than a decade after the arrival of MALDI–TOF MS in clinical microbiology laboratories, MALDI has become among the most conventional molecular methods of for microbiological diagnosis. Part of this success can be attributed to its speed, reliability, and low cost. Nonetheless, traditional bacteriological methods like quality control of clinical samples, Gram-staining results or colony growth observations are still important because they are the first and confirmatory diagnoses, respectively.
The MALDI–TOF system represents an important technique not only for microbial identification, but also for the epidemiological control of virulent strains and possible outbreaks or emergencies, in which rapid identification leads to a rapid response that ensures the control of the emergency. Future combinations with other systems or approaches, such as system biology offer a reliable quick and reliable diagnosis, but there is still much to do to standardize methods and analyses.