Submitted Successfully!
Thank you for your contribution! You can also upload a video entry related to this topic through the link below:
https://encyclopedia.pub/user/video_add?id=12596
Check Note
2000/2000
Agricultural Fertilization in Europe
Edit
This entry is adapted from 10.3390/horticulturae7060158

Fertilizers stand at the base of current agricultural practices, providing the nutrient sustainment required for growing plants.

Fertilizers are substances that provide soil with the nutrients required by plants to grow. Nowadays, mineral fertilizers worldwide represent the catalytic converter of intensive agriculture, allowing for high demand production to feed increasing populations. At the same time, it has now been ascertained that besides the main burdens for their industrial manufacture, such as considerable energy consumption [1] and high levels of pollutant generation and release to the environment [2], mineral fertilizers strongly and negatively impact the environment. More specifically, they lead to severe soil acidification [3], the impoverishment of rhizosphere biological activity in terms of microbiome richness and diversity [4][5], the presence of unsafe chemical residues in food products, etc. In order to face these occurrences and limit these negative consequences before it is too late, much research has addressed the application of natural, sustainable, and safe products that can, at least partially, replace mineral fertilizers.

2. Energy Requirement for the Industrial Production of Fertilizers

In 2018, according to EUROSTAT, the estimated final energy consumption by the agricultural sector in EU-27, mainly due to direct fuel and electricity costs, was 27.251 million tons of oil equivalents (Mtoe, unit of energy describing energy content of all fuels when in a large scale), with the highest energy balances registered in France (4.089 Mtoe), Poland (3.918 Mtoe), Germany (3.342 Mtoe), the Netherlands (3.647), Italy (2.798 Mtoe), and Spain (2.458 Mtoe).
The Italian agriculture sector is currently among the best developed in Europe and is becoming more and more sustainable and energy efficient. Notwithstanding this, however, both direct and indirect energy consumption are still quite high (i.e., more than 5 Mtoe; [6]). In agriculture, in general, direct energy costs refer to the fuel consumed by tractors, agricultural machines, and by irrigation pumps. Indeed, the main potential and effective energy savings in this sector are related to irrigation. Moreover, and specifically concerning greenhouse production, direct energy is mainly required for climatization and humidity control [7]. In a different way, besides the synthesis and production of chemical pesticides, special supplements for feeding livestock, hybrid seeds, and other related products [8], the use of fertilizers represents the major indirect energy cost.
Energy consumption for producing, packing, and delivering the main types of mineral fertilizers (Table 1) can be substantial (e.g., up to 50 MJ per N kg for the urea in an average European plant) [1]. The main nitrogen components of fertilizers are the most energy-intensive to produce, while the P and K components all require less than 5 MJ/kg [9]. The manufacture of herbicides, fungicides, and insecticides entails even higher energy equivalents (Table 1). Most of the available energy data were available from older references. Thus, it is likely that current industrial plant consumption now requires a lower input. Surely, energy efficiency solutions, innovative and best available technologies, and continuous improvements of plant design have been, and will continue to be, fundamental and effective in order to consistently reduce the energy demand for fertilizer production.
Table 1. Energy consumption, in megajoule per kilogram (MJ/kg), of the pure chemical element by the main types of mineral fertilizers.
z (BAT) indicates production in a plant endowed with best available technology. Otherwise, energy consumption is referred to production in an average plant. y An asterisk (*) indicates urea per kg.
Most NPK fertilizers, at a global level, are produced in some macro areas including East Asia, North America, Eastern Europe, and Central Asia [18]. It is worth noting that ammonia plants in Europe, on average, are considered the most energy efficient worldwide, immediately followed by those in the U.S.A., in contrast to lower energy efficiency in Russia and Ukraine (Fertilizers Europe, Brussels). To the fertilizer producers, low energy costs and therefore low environmental impact would be desirable. However, at the same time, both the market and agriculture need fertilizers with a long soil persistence that can confer optimal yields.

3. Consumption of Fertilizers in Traditional and in Organic Agriculture

Looking at the use of fertilizers in Italy as a measure of the amount of required nutrients for plants applied per unit of arable land, a significant decline was observed compared to twenty years ago (210.0 kg/ha in 1998 and 130.6 kg/ha in 2018). In the last decade it was always below the average of the European member states, which has settled at around 150 kg/ha in the last few years [19]. Based on the dataset reported in Table 2, Ireland represents the top EU fertilizer-using country, registering up to 1444.9 kg/ha in 2018, followed by Belgium, the Netherlands, and Slovenia, showing values close to 300 kg/ha. In the last twenty years, from 1998 to 2018, only a few EU countries (Denmark, Finland, Italy, the Netherlands, and Slovenia) showed a constant decline of fertilizer use every ten years. Some others (e.g., Belgium and Greece) showed a remarkable reduction in the middle, followed by an increase after ten years. Others (Ireland in particular, but also Bulgaria, Hungary, Latvia, Lithuania, Poland, Portugal, and Romania) showed an impressive increase which was related, at least partially, to the demand for higher agricultural production.
Table 2. Annual consumption of fertilizers z in kilogram per hectare (kg/ha) of agricultural land in the 27 member states of the European Union in 1998, 2008, and 2018.
z Fertilizers considered in this table are all products based on nitrogen, potassium, and phosphorus (NPK) elements. This data does not include either animal or vegetative manure (data source: The World Bank—World Development Indicators, [19]). y Referring to year 2002, the first available data for Luxemburg.
According to EUROSTAT, looking at the amounts of fertilizers spread over the EU countries by considering the sum of the total nitrogen and phosphorus, France, Germany, Spain, and Poland represent the EU member states spreading the largest fertilizer amounts to their land, with, respectively, 2.1, 1.3, 1.0, and 0.9 million tons of N, and 181.6, 87.8, 209.4, and 150.0 thousand tons of P, in 2019 [20]. The primacy of Ireland in the consumption of fertilizers is also evident when looking at the tons of nitrogen and the tons of phosphorus utilized for every 1000 inhabitants, respectively, 74 and 9 in 2019, showing a sharp decrease compared to twenty years earlier (Figure 1). 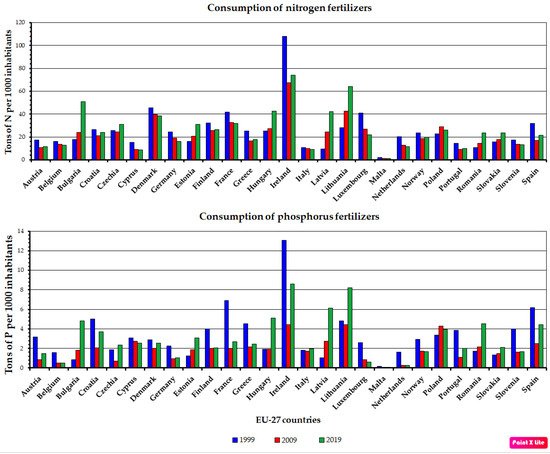 Figure 1. Consumption of nitrogen and phosphorus fertilizer in the EU-27 members states in 1999 (blue bars), in 2009 (red bars), and in 2019 (green bars). Tons of N-based fertilizers expressed as tons of N consumed by 1000 inhabitants in the upper graph; tons of P-based fertilizers expressed as tons of P consumed by 1000 inhabitants in the lower graph. Data source: EUROSTAT (Datasets: “Consumption of inorganic fertilizers” [AEI_FM_USEFERT] and “Population on 1 January by age and sex” [DEMO_PJAN]).
The trends of N and P consumption by 1000 inhabitants with respect to more than twenty years ago in the European countries are represented in Figure 1. Here, each country showed a peculiar trend. In most cases, however, and when focusing particularly on 1999 and 2019, the trends were declining (except for several Eastern countries such as Bulgaria, Czechia, Estonia, Hungary, Latvia, Lithuania, Poland, Romania, and Slovakia). This evidence fits well with the increase in the agricultural demand and related land used occurring in these countries. Interestingly, similar trends can be observed for N and P fertilizers.
The limited or absent use of mineral fertilization represents the main feature of organic farming, and several organic farming systems are more energy efficient than their conventional counterparts (although there are some notable exceptions) [21]. Consequently, there is still much to be done, and it is particularly recommended to improve fertilizer (N) management in organic production to ameliorate its energetic and economic performance [22][23]. In 2019, Europe invested 8.5% of the utilized agricultural area (UAA) in organic farming, and is foreseen to increase in coming years. In this general scenario, Italy performed very well with 15.2% of the UAA in organic, and was the fourth country for the highest shares of organic land after Austria (25.3%), Estonia (22.3%), and Sweden (20.4%). Several major EU countries showed lower percentages of UAA under organic cultivation, including Ireland (1.6%), Bulgaria (2.3%), the Netherlands (3.7%), Norway (4.6%), and France and Germany (both with 7.7%) [20][24].
In Italy, the increase in organic agriculture is the major cause of the reduction of total fertilizer distribution, as can be noted in Figure 2, which shows the trend of fertilizer application in Italy from 2003 to 2019, referring to the amounts of fertilizers used in traditional and in organic agriculture, respectively. 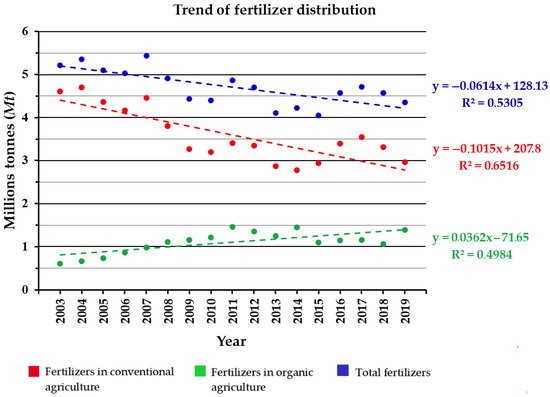