Submitted Successfully!
Thank you for your contribution! You can also upload a video entry related to this topic through the link below:
https://encyclopedia.pub/user/video_add?id=12528
Check Note
2000/2000
Black Coral Distribution in Italian
Edit
This entry is adapted from 10.3390/d13070334

The aim of this entry is to present a review of the knowledge on the occurrence of black corals in the Italian seas, providing the first comprehensive distribution map of these species. The distribution of black corals may be considered the first step towards defining a more complete overview regarding the present knowledge on these vulnerable species. This study also highlights the need for the conservation programs protecting black corals in the Italian seas.

Black corals (Cnidaria: Anthozoa: Hexacorallia: Antipatharia) are characterized by arborescent vertical or monopodial growth forming three-dimensional habitats supporting high levels of biodiversity [1][2]. Antipatharian corals have been considered for a long time to be among the rarest and sporadic coral species in the Mediterranean Sea [3]. To date, it is well known that these corals are able to form dense aggregations forming pristine underwater forests [4].

Because of their rarity, black corals low growth rates, and low recovery ability, are considered extremely sensitive and listed as indicator species of vulnerable marine ecosystems (VMEs). For this reason, they are mentioned in several international agreements concerning marine ecosystem conservation (CITES Appendix II [available at http://www.cites.org ]; European Community 1999), in Annex III of the Berna Convention, in Annex II of the Barcelona Convention for the Mediterranean species, and are also categorized as “threatened” by the International Union for Conservation of Nature (IUCN) Red List of Mediterranean Anthozoa [5] (with the millennial life span L. glaberrima being the only one listed as “endangered”). The main anthropogenic impact affecting these corals is represented by fishing as artisanal and recreational activities and bottom trawling, which may cause the resuspension of fine sediments [4][6][7]. Rare activities related to the commercial fisheries of precious corals for the jewelry industry is also reported [8].

Review studies on deep coral assemblages in the Mediterranean Sea have mainly been limited to scleractinian corals (i.e., Lophelia and Madrepora [9][10]), while few studies were exclusively focused on the distribution of black corals in the Italian seas [4][11][12][13][14][15]. The Italian seas have an average depth of about 1500 m, and a maximum depth of about 5000 m. The main Italian seas are the Tyrrhenian, Adriatic, and Ionian, and the other seas are represented by the Ligurian and Corsica seas, and the Otranto, Messina, and Sicily straits. The seawater temperatures range from 12 °C to 13 °C during the cold season, and from 26 °C to 28 °C in the warm season. Temperatures at the seafloor are constant and range from 12 °C to 13 °C [16]. During the last decades, the temperatures of the Italian seas have significantly increased [17], which resulted in dramatic changes in biodiversity composition [16]. To date, 29 Italian Marine Protected Areas (MPAs) have been established, but this number strongly needs to be updated [18].

The aim of this study is to present a review of the knowledge on the occurrence of black corals in the Italian seas, providing the first comprehensive distribution map of these species. The distribution of black corals may be considered the first step towards defining a more complete overview regarding the present knowledge on these vulnerable species. This study also highlights the need for the conservation programs protecting black corals in the Italian seas.

Table 1 shows dataset of black coral distribution in the Italian Seas. This dataset was created using all the available scientific literature and reports, starting from 1973 until today. For each site, when available, the following information was reported: region, ID (number code referred to the code reported in Figure 1 ), sites, sea, coral species, minimum and maximum depth, setting, substrate, anthropogenic impact, reference. The type of setting is based on the classification used by Gori et al. [19], whereas the substrate types were referred to those reported in the related scientific articles. The categories related to anthropogenic impact are represented by fishing activity (trawl and ghost nets, longlines, lines, ropes, other fishing gear) and lost garbage (e.g., plastic and metal objects). 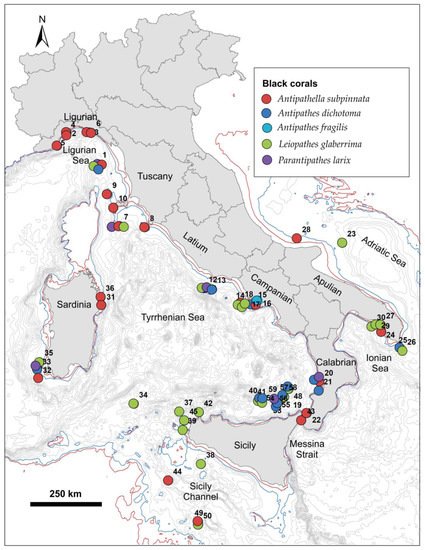 All the sites reported in Table 1 were used to create the first distribution map of black corals in the Italian seas ( Figure 1 ).

In the reported studies remotely operated vehicles (ROVs) and multibeam echosounders (MBES) were used for the identification of black coral specimens and the description of the geomorphological characteristics of the substrate [4][11][12][13][14][15].

In addition, L. glaberrima shows the most bathymetric tolerance, ranging from 45 m to 730.5 m water depth. In detail, 62% of the Italian submarine sites are characterized by the occurrence of mixed black coral communities, which are most frequent in depths ranging from 50 m to 200 m. 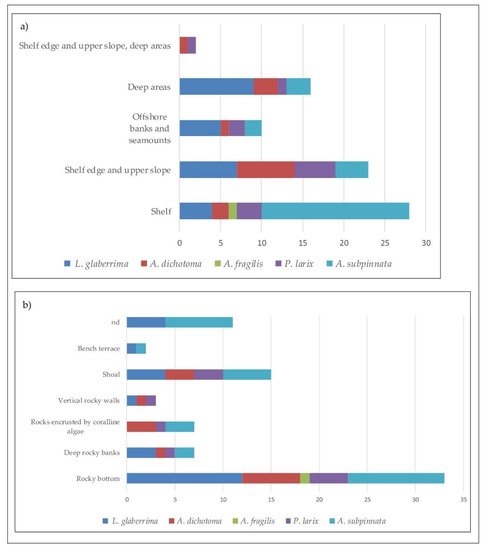 Figure 2. (a) Different settings and (b) substrate types where black corals were observed in the Italian seas.

The analysis of all the reported sites ( Table 1 ) has permitted the identification of the different anthropogenic impacts affecting the Italian sites where the black corals are settled ( Figure 3 ). 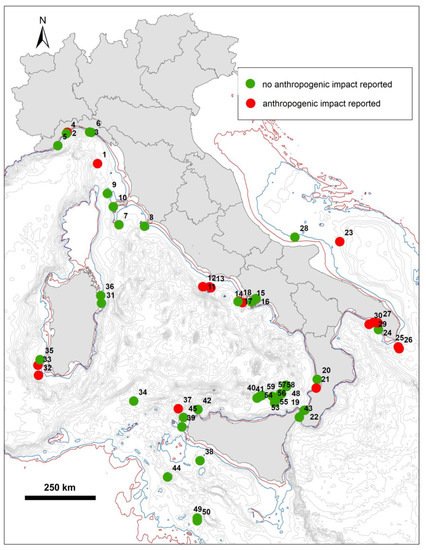 Figure 3. Map of the Italian black coral communities that are affected or unaffected by anthropogenic impact.

These sites, representing 29% of the total, are found in water depths ranging from 45 m to 730.5 m (with a medium depth of 200 m), and are associated with the rocky bottom, deep rocky banks, and shoal substrates. The items affecting the black coral communities are represented by two main categories ( Table 1 ): fishing activity (trawl and ghost nets, longlines, lines, ropes, other fishing litter) and lost garbage (e.g., plastic and metal objects). A total of 83% of debris impacting the Italian sites is associated with fishing activity, whereas a few exceptions are related to lost garbage ( Table 1 ).

Black corals have for a long time been considered to be rarest corals in the Mediterranean Sea [3]. The recent increase in the use of modern technological tools, such as ROVs, has permitted the documentation of the great variability of the coral communities occurring in Mediterranean environments e.g., [2][26][44][45]. Exploration of the submarine environment by ROV has represented a turning point in the updating knowledge on benthic communities, providing a valuable tool for the understanding of their geographical and bathymetrical distribution, and their morphological description and ecological aspects [15][46].

Our study is focused on the distribution analysis of the antipatharian corals already reported in the Italian seas. This first step highlighting the presence of the black corals should be considered more common than what supposed. The present review strongly supports the idea proposed by Bo et al. [47], that black corals are among the most conspicuous and widely distributed organisms of mesophotic Mediterranean coral communities (especially in a depth range from 60 m to 150 m). It is also confirmed that the majority occur on rocky bottom and shoals [45]. This statement could be due to the occurrence, in the mesophotic zone, of more favorable environmental factors able to enhance coral growth (which are lower levels of competition for space, food supply, temperature, currents rich in suspended matter, heterogeneity of substrate, rate of sedimentation [47]). According to present knowledge e.g., [1][45][47][48][49], currents rich in suspended matter are probably the major environmental factor influencing black coral settlement and composition in the Italian seas.

Probably, the occurrence of black corals in Italy on specific types of substrate (mainly rocky bottoms and isolated shoals) as well as their bathymetric distribution (within 50 m and 300 m depth), makes them more exposed to fishing activities, causing damage to vulnerable marine ecosystems. Furthermore, this impact represents a considerable concern, considering their specific characteristics such as 3D structure, long lived species, slow growth rates, and recovery ability [23][50][51]. Fishing impacts (including ghost nets) can lead to the direct removal or partial damage to coral colonies. The skeletons of the damaged corals may become overgrown by various fast growing organisms [4][52]. This kind of damage can have far-reaching and long lasting effects on the population dynamics of Mediterranean black corals, especially when their low growth rates are considered [42]. Despite of the distance from the coast, it is well known that rocky bottoms and isolated shoals are considered important targets for fishermen [23]. In addition, other factors are well known to influence fishing efforts [23][53][54], such as their depth, topography, and the fact that they could represent a refuge for many commercial species. The different entities of fishing disturbance could also be linked to different coral morphologies. In fact, the morphological characteristics (arborescent and erect structures) and the grade of flexibility of black corals may increase their resistance to mechanical friction, showing different mechanical responses to their entanglement [23][43][55].

Despite all this evidence, the only Italian MPA, containing black coral forests, is the Tremiti Islands Marine Protected Area [40]. All these findings indicate the need for actions focused on the implementation of effective management and proper conservation measures to preserve the Italian antipatharian corals.