Submitted Successfully!
Thank you for your contribution! You can also upload a video entry related to this topic through the link below:
https://encyclopedia.pub/user/video_add?id=12428
Check Note
2000/2000
Biopesticide Encapsulation Using Supercritical CO2
Edit
Upload a video
This entry is adapted from 10.3390/molecules26134003

As an alternative to synthetic pesticides, natural chemistries from living organisms, are not harmful to nontarget organisms and the environment, can be used as biopesticides, nontarget. However, to reduce the reactivity of active ingredients, avoid undesired reactions, protect from physical stress, and control or lower the release rate, encapsulation processes can be applied to biopesticides. The use of supercritical fluid technology (SFT), mainly carbon dioxide (CO2), to encapsulate biopesticides is highlighted, as they reduce the use of organic solvents, have simpler separation processes, and achieve high-purity particles.

Pesticides are any substance or mixture able to repel, eradicate, or mitigate any pest [1]. Since the intensive application of pesticides, agricultural productivity has increased exponentially. According to The Food and Agriculture Organization of the United Nations (FAO) data, approximately 4 million tonnes of pesticides were used globally or sold to the agricultural sector for crops and seeds in 2018.

The negative effects on soil, air, water quality, agricultural products, and nontarget organisms became noticeable, alongside the evolution of pest resistance due to conventional synthetic pesticide use [2][1]. Less harmful alternatives have been used to control pests. As an example, any pest’s natural enemy can be used for biocontrol. Before this application, different species of organisms are tested against the target plant pathogen, and the most active species is considered for biocontrol.

Another alternative to the use of synthetic pesticides is the application of biopesticides, which are based on naturally occurring living organisms, including animals, plants, and microorganisms [2]. The biopesticide can be retained by physical or chemical interactions within a matrix to provide chemical and physical protection against environmental factors and improve biopesticide stability by decreasing the volatility and reactivity of the active ingredient, a process named encapsulation [3][4]. There are several methods of encapsulation, such as emulsification, coacervation, and spray drying [3]. However, the use of supercritical fluid technology to encapsulate particles has also been explored due to its having several advantages, mainly low environmental impact and high purity [5][6]. Carbon dioxide is the most frequently used supercritical fluid since it has low toxicity, low cost, easy removal, and mild critical properties [7].

Biopesticides can be classified into three main groups: (1) microbial pesticides, including bacteria, algae, fungi, viruses, or protozoa as active ingredients; (2) Plant-Incorporated-Protectants (PIPs), which are substances produced by plants due to changes in the genetic material; and (3) biochemical pesticides, referring to naturally occurring substances that control pests by non-toxic mechanisms [2][8][9].

Despite the low environmental impact of most biopesticides, since they present non-toxic or less toxic constituents, there are some concerns about the commercialization of natural pesticides, such as regulatory requirements, availability of the active ingredient, and stability of the formulation in storage, transport, and during application. To overcome the instability and lower number of active ingredients used, encapsulation technologies have been developed [10][11].

Encapsulation is a physical process in which a core material or active substance, such as small solid particles, liquid droplets, or gases are entrapped in an encapsulating agent or wall material to completely or partially isolate the core material, improving its stability, by reducing its volatility and reactivity, and maintaining its viability against adverse environmental conditions, such as pH extremes [7][11][12].

To choose the proper encapsulation technique, the desired application, expected particle size distribution, biocompatibility of the particles, physicochemical properties of the active and the wall material, release mechanism, and process costs are evaluated [7]. There are many encapsulation techniques documented for biopesticides, classified by their chemical or physical processes. Among the chemical processes, the most explored are emulsion polymerization, miniemulsion, melt-dispersion, in situ polymerization, and coacervation. As for the physical processes, spray drying, fluidized bed coating, and ionic gelation encompass the most documented encapsulation techniques for biopesticides and natural substances that have the potential to be biopesticides [3][13][14][15][16][17] (Table 1).

Above the critical temperature and critical pressure of a fluid, it is named a supercritical fluid, a phase in which there is no transition between vapor and liquid states. The lack of transition between those two phases provides a great solubilizing capability to the supercritical fluid (SCF), which increases with higher pressure values at a constant temperature. SCF refers to a single-phase matter in a non-condensing state near the critical point, which is sensitive to changes in pressure and temperature, once the slightest variation in these parameters leads to noticeable changes in density, resulting in a more gaslike or liquidlike fluid [5][14][46][47].
Compared to other conventional encapsulation processes, the usage of SCF has advantages, such as easy separation of solute/solvent and tunable density. Furthermore, it reduces the use of toxic organic solvents and there is no need to carry out separation steps since this can be performed by depressurization [48][49].
Table 3 illustrates some applications of supercritical technologies applied to biopesticides or natural products that could be potential biopesticides.
Table 3. Biopesticide encapsulation using supercritical CO2.

Through Rapid Expansion from Supercritical Solution (RESS), fine particles can be produced by saturating the SCF with a solid in an extraction unit. Then, the solution is abruptly depressurized in a low-pressure chamber, leading to rapid nucleation of the substrate in fine particles, collected from the gaseous stream [46][60] (Figure 1). The morphology of the resulting solid material depends on the temperature, pressure drop, nozzle geometry, and other parameters, as well as on the chemical structure of the active ingredient [60].

Particle from Gas Saturated Solutions (PGSS) is a process in which an SCF, usually scCO2, is dissolved in different materials of low melting temperatures. This technique has been used for some liquids and solids, such as powder coatings, monoglycerides, vitamins, antioxidants, fats, and food-related products [52]. The process is schematized in Figure 2. The solution or melt to be crystallized is mixed and saturated with the SCF at an appropriate pressure and temperature, and the solution is sprayed into a low-pressure precipitation chamber. After the depressurization, the dissolved carbon dioxide is released and expands; consequently, there is a cooling effect that promotes the formation of the microparticles [14][61]. 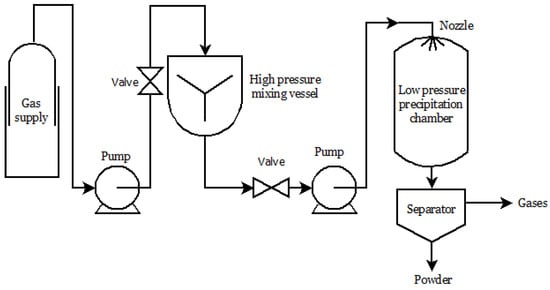 Using Supercritical Solvent Impregnation (SSI), it is possible to impregnate polymers with active compounds dissolved in supercritical fluids, especially scCO2. It is also possible to dissolve other substances to enhance the solubility of the active compound, acting as a cosolvent, or add a surfactant to improve its dispersion in the polymer [14].
Divided into three steps, the SSI process starts with the dissolution of active substances in SCF. After that, the supercritical fluid containing the active ingredient swells into a polymeric matrix, promoting the internal diffusion of the active compound followed by decompression, lowering the SCF density and allowing solute precipitation [62] (Figure 3). 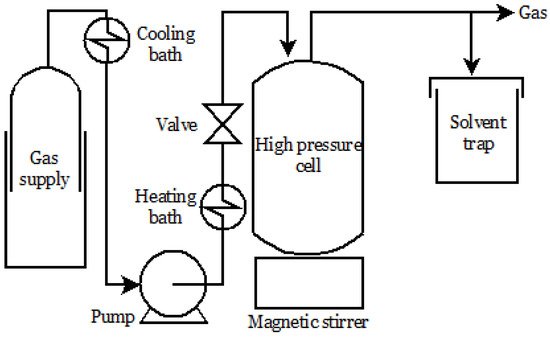 In the Supercritical Assisted Atomization (SAA) process, scCO2 acts as a cosolute and is dissolved in a solution containing the active compound, forming an expanded liquid solution with reduced viscosity and surface tension, reducing cohesive forces [57]. This is a two-step atomization: first, there is pneumatic atomization, in which a pressure drop occurs at the nozzle outlet, and then there is decompressive atomization, by steadily delivering CO2 in the primary droplets. The microparticles are formed through the evaporation of the solvent and supersaturation of the solute in the droplets (Figure 4) [63]. 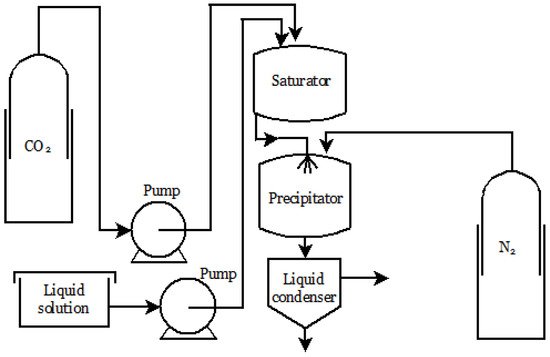 Through Supercritical Antisolvent Fractionation (SAF), the SCF, mainly scCO2, is used as an antisolvent: it dissolves the organic solvent and eliminates undesired compounds. As a result, there is an enrichment of the active ingredient [58].
Since scCO2 has a non-polar nature, it is possible to fractionate polar compounds of interest in an organic solution containing various components. This happens during the contact between the SCF and the liquid mixture in a pressurized vessel. The liquid solution, dispersed via spray, can be fractionated and precipitated in a high-pressure vessel. CO2 is recovered by decompression [48][58] (Figure 5). 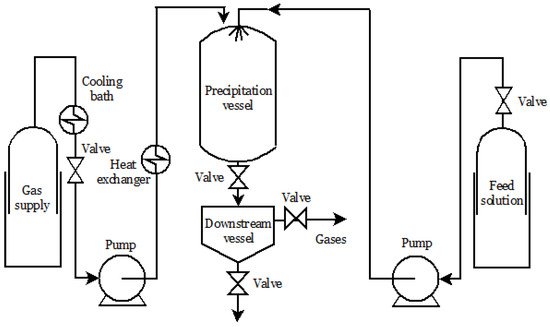 Figure 5. Scheme of a SAF plant.

Supercritical Phase Inversion offers the possibility to create porous membranes of polymers that can be loaded with active ingredients. In this technique, a liquid–liquid demixing phenomenon is produced from a polymeric solution by using scCO2 as a non-solvent to steadily remove the organic solvent. The use of scCO2 in this phase inversion avoids the collapse of the pore structure due to its low surface tension and gaslike diffusivity. Moreover, a subsequent membrane drying process is not required. The membrane morphology can be controlled by changing the operating conditions [64] and compounds can be included in the membrane. This process starts with producing polymer solutions by solubilizing the polymer in an organic solvent that should have a proper affinity with scCO2. The final solution is placed in stainless steel caps and processed in a vessel containing scCO2, filled from the bottom up to the desired pressure. Then, this vessel is depressurized, forming dried membranes [65].

A potential SFT for biopesticide encapsulation is Supercritical Anti-Solvent Precipitation (SAS), in which scCO2 is used as antisolvent, so it has to be miscible with the chosen liquid solvent. This method aims to create a free-flowing powder, and a polymer can be added to the solution to encapsulate the particles [48]. SAS treated material can range from nanoparticles to microparticles and it can be amorphous or semi-crystalline [66].

Regarding the physical and chemical stability of the active ingredients of biopesticides, this work summarized the most common encapsulation techniques, highlighting the materials used, particle size, and their effect on the stability of the active compound. Supercritical fluid technology, especially that using supercritical carbon dioxide, stands out among other encapsulation technologies, due to the reduction in toxic organic solvents and ease of separation by depressurization.
Challenges regarding the use of supercritical fluid technologies were presented, such as solubility in the SCF, scaleup, multiphase equilibria, and product recovery concerns. Furthermore, studies must be carried out to investigate if encapsulation processes can damage biopesticide activity, especially under supercritical conditions.

More
© Text is available under the terms and conditions of the Creative Commons Attribution (CC BY) license (http://creativecommons.org/licenses/by/4.0/)
Upload a video for this entry
Information
Subjects: Agriculture, Dairy & Animal Science
Contributor MDPI registered users' name will be linked to their SciProfiles pages. To register with us, please refer to https://encyclopedia.pub/register :
Dário Rodrigues do Nascimento Junior
View Times: 66
Revisions: 2 times (View History)
Update Time: 27 Jul 2021
Table of Contents
1000/1000
Hot Most Recent