Submitted Successfully!
Thank you for your contribution! You can also upload a video entry related to this topic through the link below:
https://encyclopedia.pub/user/video_add?id=12424
Check Note
2000/2000
Metformin and Breast Cancer
Edit
Upload a video
This entry is adapted from 10.3390/biom9120846

Interest has grown in studying the possible use of well-known anti-diabetic drugs as anti-cancer agents individually or in combination with, frequently used, chemotherapeutic agents and/or radiation, owing to the fact that diabetes heightens the risk, incidence, and rapid progression of cancers, including breast cancer, in an individual. In this regard, metformin (1, 1-dimethylbiguanide), well known as ‘Glucophage’ among diabetics, was reported to be cancer preventive while also being a potent anti-proliferative and anti-cancer agent. While meta-analysis studies reported a lower risk and incidence of breast cancer among diabetic individuals on a metformin treatment regimen, several in vitro, pre-clinical, and clinical studies reported the efficacy of using metformin individually as an anti-cancer/anti-tumor agent or in combination with chemotherapeutic drugs or radiation in the treatment of different forms of breast cancer.

The reinforced link between diabetes and cancer and/or breast cancer has generated interest in studying the effects of widely prescribed anti-hyperglycemic/anti-diabetic drugs on the risk, incidence, progression, response to therapy, resistance, and post-therapeutic relapse in cancers. The incidence and rising rates of diabetes is a serious concern in the medical field around the globe. Worldwide, the World Health Organization (WHO) data estimate nearly 422 million diabetes affected individuals in 2014, a sharp rise when compared to the 108 million diabetes affected individuals in 1980 [1]. Data projections suggest that the global diabetes prevalence of 8.8% in 2017 will further increase to 9.9% by 2045 [2]. While it is well established that diabetes is linked to a higher risk of cardiovascular diseases, hepatic and renal complications, and nerve damage, much less appreciated is the fact that diabetes can be linked to a higher risk, incidence, progression, and post-treatment prognosis of different cancers [3][4][5][6][7]. More recently, owing to the many common risk factors attributable to both diabetes and cancer a convincing link was established, by several epidemiological studies, between the occurrence of diabetes and the higher risk and incidence of many different cancers, including the various types of breast cancer [5][8][9][10][11][12]. In this regard, particularly in breast cancers, while insulin and insulin analogues used to treat diabetes propagated tumor growth through the induction of angiogenesis and activation of mitogenic signaling mechanisms and drugs such as thiazolidinediones do not appear to have a significant anti-cancer effect, metformin on the other hand exhibited significant anti-proliferative and anti-cancer effects [5].
Metformin (1, 1-dimethylbiguanide) has its history traced back to the 18th century (year 1772), when Galega officinalis (commonly known as French Lilac/Goat’s Rue/Spanish Safonin/False Indigo) was used to treat symptoms which was later attributed to diabetes [13][14]. While the hypoglycemic activity of Galega officinalis was attributed to the guanidine component by the 1800s, the apparent toxicity associated with the clinical use of guanidine led to synthesis, testing, and use of several biguanides, including dimethylbiguanide, for their glucose-lowering and anti-malarial effects and for the treatment of influenza in the late 1920s [13][14]. It was then in 1957 that Dr. Jean Sterne published his studies on metformin and proposed its clinical development and the name ‘Glucophage’ (meaning glucose-eater) for metformin [13][14]. Metformin was thrust into the limelight as a better anti-hyperglycemic drug by the late 1970s, when its cousins, the biguanides such as phenformin and buformin (which had more potent glucose-lowering effect), were associated with lactic acidosis and had to be discontinued in medicinal practice [13][14]. Metformin on the other hand reportedly has only mild to moderate side effects such as nausea, vomiting, and diarrhea, which can be rectified by treatment dosage adjustments [15]. However, predominantly in elderly individuals, with heart failure, hypoxia, sepsis, renal and hepatic comorbidities, and dehydration, metformin administration can lead to lactic acidosis in rare cases [15][16][17][18]. The confirmed anti-hyperglycemic effect (without causing hypoglycemia) and the favorable safety prolife when compared to phenformin and buformin helped metformin claim the title as the ‘most widely prescribed and first-line oral anti-diabetic drug’ and manages to keep that title 62 years after its first clinical use in the treatment and management of type 2 diabetes [13][14][19].
Metformin decreases the levels of blood glucose by decreasing gluconeogenesis and glycogenolysis in the liver, decreasing the intestinal absorption of glucose, reducing the release of free fatty acids (FFA) from adipose tissue, and increasing glucose utilization by the muscle (Figure 1) [20]. Apart from its glucose-lowering effect, metformin was studied for its cardioprotective and vasculo-protective effects and more recently for its effects as a cancer preventive and anti-cancer/anti-tumor agent in different cancers (Figure 1) [5][20][21]. Depending on patient prolife and various disease conditions or stages, metformin treatment-associated beneficial effects in the treatment of hepatic diseases [22][23][24][25], renal damage and disorders [26], neurodegenerative diseases [27][28][29], and bone disorders [30] were reported. In addition, metformin treatment-related antiaging effects, delay in the onset of age-related disorders, and improvement in longevity (lifespan) were reported in C. elegans, insects, and rodents [31][32][33][34]. 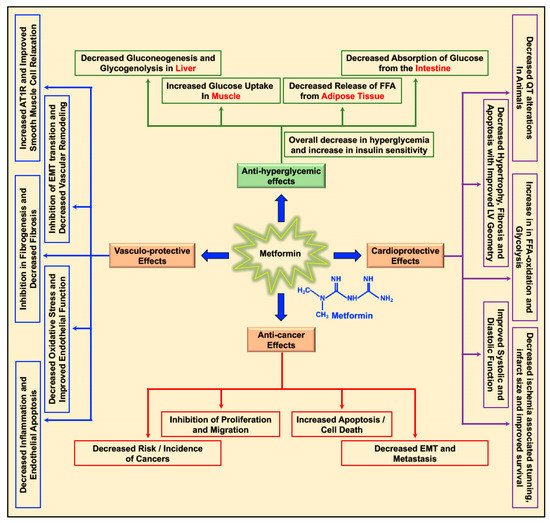 2. Biology of Metformin and Molecular Mechanism of Action

In a type 2 diabetic individual who receives metformin orally, the concentration of metformin in the hepatic circulation may reach 50 μM; with the peak plasma concentration of metformin at 20 μM [5][35][36]. The hydrophilic and cationic nature of metformin at physiological pH makes it highly unlikely that metformin rapidly diffuses through the cell membrane and exerts it effect on cell function. In addition, the kidneys carry out the elimination of unaltered metformin through the urine [37]. Hence, it is evident that metformin requires the presence and support of transporter molecules for its absorption, distribution, and elimination to exert its biological function. In this regard, the organic cation transporters 1, 2, and 3 (OCT1, OCT2, and OCT3), the plasma membrane monoamine transporter (PMAT), and multidrug and toxin extrusion protein 1 and 2 (MATE1 and MATE2) transporters are reported to play key roles in transporting metformin into and out of the cell in the intestine, liver, and kidney [37][38][39][40][41][42][43][44]. The thiamine transporter 2 (THTR2) also plays a role in intestinal absorption and renal re-absorption of metformin [45]. Alterations in the OCT1 gene reduced hepatic uptake of metformin and reduced the efficacy of metformin in reducing blood glucose levels by the inhibiting gluconeogenesis and glycogenolysis [46][47].
While several studies have reported various ‘AMPK dependent’ and ‘AMPK independent’ mechanisms for the anti-cancer/anti-tumor effects of metformin in cancer therapy, these anti-cancer effects of metformin were only observed at very high concentrations (>5 mM) and fall short of explaining how such high concentrations enters the cancer cells and exerts its anti-neoplastic effect. Studies have implicated that the susceptibility and/or resistance of cancer cells to metformin treatment is dependent on the varying levels of the cell surface metformin transporters. Overexpression of OCTs that contribute to intracellular accumulation of metformin in cancers would make them susceptible to metformin treatment (which should explain the high concentrations of metformin required for anti-cancer treatment) while the overexpression of MATE transporters that contribute to the extrusion of metformin out of the cell would render the cancer cell resistant to metformin treatment (Figure 2) [48][49][50][51]. 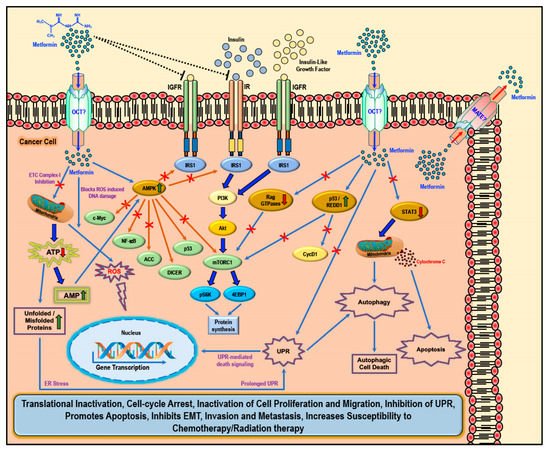 More
© Text is available under the terms and conditions of the Creative Commons Attribution (CC BY) license (http://creativecommons.org/licenses/by/4.0/)
Upload a video for this entry
Information
Subjects: Biology
Contributor MDPI registered users' name will be linked to their SciProfiles pages. To register with us, please refer to https://encyclopedia.pub/register :
Samson Samuel
View Times: 45
Revisions: 2 times (View History)
Update Time: 26 Jul 2021
Table of Contents
1000/1000
Hot Most Recent