Submitted Successfully!
Thank you for your contribution! You can also upload a video entry related to this topic through the link below:
https://encyclopedia.pub/user/video_add?id=12329
Check Note
2000/2000
Long Non-Coding RNAs in Choriocarcinoma
Edit
Upload a video
This entry is adapted from 10.3390/ijms22126506

Choriocarcinoma (CC), a subtype of trophoblastic disease, is a rare and highly aggressive neoplasm. There are two main CC subtypes: gestational and non-gestational, (so called when it develops as a component of a germ cell tumor or is related to a somatic mutation of a poorly differentiated carcinoma), each with very diverse biological activity. Long non-coding (lnc) RNAs are non-coding transcripts that are longer than 200 nucleotides. LncRNAs can act as oncogenes or tumor suppressor genes. Deregulation of their expression has a key role in tumor development, angiogenesis, differentiation, migration, apoptosis, and proliferation.

Choriocarcinoma (CC), a subtype of trophoblastic disease [1], is a rare and highly aggressive tumor with varied global incidence [2]. CC is histologically characterized by an admixture of: syncytiotrophoblasts and mononucleated cytotrophoblastic cells. Two significant CC subtypes, gestational and non-gestational (so called when it develops as a component of a germ cell tumor or is related to a somatic mutation of a poorly differentiated carcinoma) (Figure 1), have diverse underlying biologies and clinical outcomes (Table 1) [3]. The former can arise in the uterus and rarely in extrauterine sites following a hydatidiform mole (50%), a miscarriage or induced abortion (25%), a normal pregnancy (22.5%), or an ectopic pregnancy (2.5%) [2]. Non-gestational CCs have been shown to arise from pluripotent germ cells in both male and female gonads, most commonly in the ovary and retroperitoneum [3][4][5], or pelvis [6]. Pure CC is exceedingly rare, but focal areas of CC are seen in approximately 12% of embryonal and teratocarcinomas [7]. Foci of CC may be present in gestational mixed trophoblastic tumors and in non-gestational mixed germ cell tumors. Rare cases of extrauterine carcinoma with trophoblastic cells represent differentiation of pluripotent cells into malignant somatic cells [3].

LncRNAs, by acting as tumor suppressor genes or oncogenes, play a critical physiological role in apoptosis, invasion, metastasis, and cell proliferation in several cancers. LncRNAs are also involved in the pathogenesis of cancers of the female reproductive system (ovarian, uterine, vaginal, cervical, and vulvar cancers) [10]. However, to date, only a few studies address the role of lncRNA in CC. Novel mechanistic insights into how gene expression is specifically regulated by lncRNAs, contributing to CC formation, are outlined below. Table 2 summarizes the functions of the main lncRNAs implicated in CC.

Table 2. LncRNAs with a role in choriocarcinoma.

3. Clinical Applications of lncRNAs in Choriocarcinoma

Given that lncRNAs can be detected in almost all tissues and body fluids, including peripheral blood, and are not easily degraded by RNases, they can be more sensitive and specific than DNA, proteins, and protein-coding RNAs in the diagnosis of tumors [19][20]. Thus, lncRNAs can be potentially utilized as novel non-invasive biomarkers in cancer diagnosis [21]. Even though there has been increasing interest in the study of lncRNAs in gynecological cancers, research is still preliminary. The association of many dysregulated lncRNAs with clinical features leads to the design of novel biomarkers for diagnosis and management of patients with gynecological cancers, ultimately attaining better prognosis [10]. Whether lncRNAs will be also beneficial in the early detection of CC needs to be investigated. Currently, there is no evidence that lncRNAs are used as biomarkers for diagnosis and prognosis of patients with CC. Moreover, given the rarity of the tumor, we hope that these molecules may be used in the future to distinguish gestational CC from non-gestational tumors in an easier and quicker way than the current state-of-the-art methods (biopsy and microsatellite analysis).

Interestingly, most lncRNAs are expressed in a cell type- and tissue-specific manner, and in this respect, lncRNAs lend themselves as potentially important therapeutic targets. Specifically, lncRNA targeted therapy, unlike chemotherapeutic regimens, needs to hinder the signaling pathways in which lncRNA plays an important role in tumor development and progression, whilst aiming to avoid the adverse effects on normal cells. There may also be a potential role of lncRNA as biomarkers for disease management, including non-invasive screening [22].

The use of RNA interference (RNAi) to modulate gene expression has been successfully used to silence lncRNA in vivo [24]. Advancements in RNAi have led to Food and Drug Administration (FDA) approval of lipid nanoparticles (LNPs) which contain short interfering RNA (siRNA) that is being used to treat hereditary amyloidosis in adults [25].

LncRNAs associated with cancer can also be modulated by using antisense oligonucleotides (ASOs). ASOs are single stranded with a central native or chemically modified DNA stretch, flanked on either side by RNA nucleotides. DNA forms RNA/DNA heteroduplex with target lncRNA, which is cleaved by endogenous RNaseH1 [26]. ASOs have been successfully used to alter mRNA expression as part of the treatment of various diseases, including different types of cancer where lncRNAs are highly expressed [27][28].

Advances in genomic interference methods, with superior specificity when compared to RNAi, have been developed recently. CRISPR interference (CRISPRi) using CRISPR-Cas9 and CRISPR-Cas13 led to the successful silencing of transcriptionally active lncRNA-expressing sites. In the CRISPR-Cas9 approach, nucleotides devoid of nucleolytic activity, termed dead-Cas9, are fused to transcriptional repressors. Transcriptional silencing is achieved because, via guide RNAs, this fusion protein is targeted to a specific gene promoter [29]. The development of guide RNAs targeting the promoters of thousands of lncRNAs in the human genome together with CRISPRi enabled the selective inactivation of lncRNA genes in human cancer cell lines. Liu et al. further underscored tissue specificity of lncRNA by identifying approximately 500 lncRNAs in only one cell type [30]. Therefore, it is possible to achieve transcriptional silencing of lncRNAs via CRISPR-based approaches, however, several challenges limit their immediate use for therapeutic targeting [31][32][33][34]. Major limitations include delivery methods (viral and non-viral vectors), with viral vectors limited in the size of the cargo they are able to deliver to the cells of interest [35][36][37][38]. Regardless of the current limitations, the future undoubtedly looks bright for CRISPR-directed lncRNA therapies.

LncRNAs acting as tumor biomarkers have been shown to have an important role in the diagnosis and management of a number of cancers. Studies on the relationship between lncRNAs and gynecological cancer are still at the preliminary stages. Even though different lncRNAs seem to have oncogenic or tumor suppressive roles in CC (Figure 2), the exact underlying molecular mechanism of lncRNAs in CC is largely unknown. A number of lncRNAs could be associated with tumorigeneses, invasion, and stemness, leading to therapy resistance in CC. Currently, research is still in the early stages of characterizing the wide range of roles lncRNAs may play in CC pathogenesis. Therefore, more detailed investigation of lncRNAs in CC is needed. This may revolutionize our understanding of CC and result in advances in management, beyond the state of the art. In this regard, molecular tools including ASOs, siRNAs, and CRISPR technology could be used in the future development of RNA-based therapeutics targeting oncogenic lncRNAs. 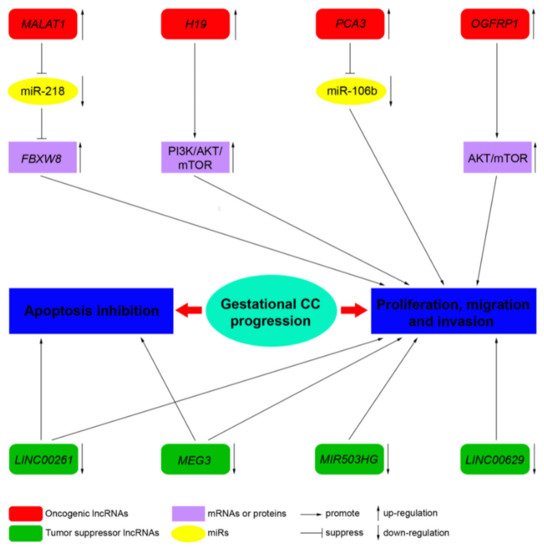 More
© Text is available under the terms and conditions of the Creative Commons Attribution (CC BY) license (http://creativecommons.org/licenses/by/4.0/)
Upload a video for this entry
Information
Subjects: Oncology
Contributor MDPI registered users' name will be linked to their SciProfiles pages. To register with us, please refer to https://encyclopedia.pub/register :
John O'leary
View Times: 80
Revisions: 2 times (View History)
Update Time: 23 Jul 2021
Table of Contents
1000/1000
Hot Most Recent