Submitted Successfully!
Thank you for your contribution! You can also upload a video entry related to this topic through the link below:
https://encyclopedia.pub/user/video_add?id=12297
Check Note
2000/2000
Retinoic Acid and Stemness
Edit
Upload a video
This entry is adapted from 10.3390/biom9100567

Stem cells have the capacity of self-renewal and, through proliferation and differentiation, are responsible for the embryonic development, postnatal development, and the regeneration of tissues in the adult organism. Cancer stem cells, analogous to the physiological stem cells, have the capacity of self-renewal and may account for growth and recurrence of tumors. Development and regeneration of healthy tissues and tumors depend on the balance of different genomic and nongenomic signaling pathways that regulate stem cell quiescence, proliferation, and differentiation. During evolution, this balance became dependent on all-trans retinoic acid (RA), a molecule derived from the environmental factor vitamin A.

Retinoic acid (RA) regulates a wide range of biological processes during development and in adult organisms [1][2][3][4][5][6][7][8][9]. Retinoic acid signaling is dependent on cells that can metabolize vitamin A (retinol) to RA. Retinol dehydrogenases oxidize retinol to retinal, and aldehyde dehydrogenases (ALDH1A1, ALDH1A2, and ALDH1A3) oxidize retinal to RA [2][10]. Retinoic acid released from these cells generates gradients that regulate neighboring cells. The precise RA level depends on the availability of vitamin A (retinol), the activity of enzymes involved in RA biosynthesis (retinol dehydrogenases and aldehyde dehydrogenases), and the RA catabolism by CYP26 enzymes [11][12][13].
Retinoic acid regulates transcription by interacting with heterodimers of nuclear RA receptors (RARα, RARβ, and RARγ) and retinoid X receptors (RXRα, RXRβ, and RXRγ) bound to RA response elements (RAREs) in the promoters of target genes [4][14][15]. The expression of over 500 genes is upregulated or downregulated by RA [16]. Moreover, RA controls other transcriptional signaling pathways via different nuclear receptors, such as the peroxisome proliferator-activated receptor β/δ [17][18], and can also regulate different protein kinases in a nontranscriptional fashion [19][20][21].
Although RA has been widely described as an inductor of cell differentiation, depending on cell-type, RA can antagonize cell differentiation and promote stemness (Table 1).
Table 1. Induction of stemness or cell differentiation by retinoic acid (RA) in a cell-type-dependent manner.

2.1. Growth-Promoting and Growth-Inhibiting Actions of RA in Breast Cancer Depend on the Cell Context-Specific Balance of Activation of Transcriptional and Nontranscriptional Pathways

By global gene expression microarray analysis, Rossetti et al. [23] determined that in breast cancer cells (T47DCtrl) grown under “physiological” RA culture conditions, many RARα-target genes, coding for tumor suppressor signaling pathways, as RARβ and the TGFβ-TGFβR2, are in a repressed transcriptional state marked by epigenetic histone modifications. In this situation, lack of expression of tumor suppressor genes cannot counteract the growth-promoting activity of nontranscriptional signaling pathways such as PI3K-AKT, triggered by direct interaction of RARα and the catalytic subunit of PI3K [23]. The degree of inhibition of RARα transcriptional function is variable in different breast cancer cell lines: mild in T47DCtrl, severe in T47DG303E, and extremely severe in T47D403. Both in vitro and in vivo treatment with supraphysiological doses of exogenous RA significantly promoted T47D403 breast cancer cell invasion [23] (Figure 1A,B). 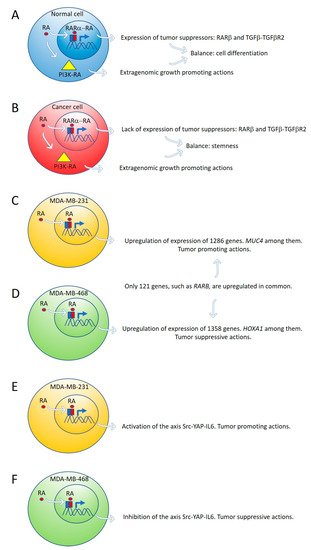 Retinoic acid induces tumor suppression in tumor xenografts of MDA-MB-468 breast cancer cells while increasing tumor growth and metastasis in xenografts of MDA-MB-231 [24]. We have used these triple-negative breast cancer cell lines as a research model to investigate the role of RA on the regulation of the signaling pathway Src-YAP-Interleukin 6 involved in stemness [25]. We found that RA activates this pro-invasive axis in triple-negative MDA-MB-231 breast cancer cells, yielding to an increased invasion of these cells. On the contrary, RA inhibits the Src-YAP-IL6 axis of triple-negative MDA-MB-468 cells, which results in decreased invasion phenotype (Figure 1E,F). In both types of cells, inhibition of the Src-YAP-IL6 axis by the Src inhibitor PP2 drastically reduces migration and invasion. The Src-YAP-IL6 axis controls invasion, metastasis, resistance to therapy, and stemness of MDA-MB-231 breast cancer cells [46][47]. IL-6 is the first universal transcriptional target of YAP involved in promoting stemness conserved from flies to humans [46][48].
Overexpression of IL-6 induces cancer cell proliferation, angiogenesis, and metastasis through stimulating STAT3, MAPK, and Akt signaling pathways [49]. IL-6 regulates cancer stem cell, mesenchymal stem cell formation, and epithelial to mesenchymal transition in cancer, and is a contributing factor for chemoresistance [49]. Sansone et al. [50] found that IL-6 mRNA was robustly elevated in mammospheres compared with breast epithelium and was required for their self-renewal and aggressive potential. Autocrine IL6-STAT3 signaling increases stem cell properties with efficient tumor colonization and outgrowth in vivo. Conversely, blockage of IL-6 reduces tumor burden and metastasis [51][52][53][54].
Nuclear YAP phosphorylation in MDA-MB-231 breast cancer cells depends on Src activity. Until recently, activation of YAP was believed to solely depend on the inhibition of the Hippo signaling pathway that retains YAP in the cytoplasm [55]. To assess if YAP activation in MDA-MB-231 breast cancer cells depends on Src activity, as observed in other cancer cells [56][57][58], we used Src inhibition by PP2, Src interference by siRNA and transfection of Src into MDA-MB-231 breast cancer cells. Src inhibition by PP2 and Src interference decreased YAP activity and downregulated IL-6 expression, while Src transfection activated YAP and upregulated IL-6 [25].
The mechanism of Src activation induced by RA is not known at present. Mechanisms independent of transcription have been reported in breast cancer cells [23]. However, the activation of the Src-YAP-IL6 axis we have observed should be the consequence of a genomic action of RA, given the 48 h delay following incubation with supraphysiological concentrations of RA (5 μM). Extragenomic effects of RA in breast cancer cells are produced faster and with lower levels of RA [23].
Overexpression of MUC4 in triple-negative breast cancer cells induced by RA [24] is an attractive candidate for Src activation because cell knockdown of MUC4 in pancreatic carcinoma decreased Src tyrosine phosphorylation significantly [59]. IL-6 induces MUC4 expression through the gp130-STAT3 pathway in gastric cancer cell lines [60].
An association of YAP activity and RA signaling with an increase in migration also has been observed in human neural crest cells [61]. YAP, as well as its paralog TAZ, is known to act as a stemness-promoting factor in several tissue types, including hepatic, intestinal, and skin stem cell niches [62][63][64][65].
It has been reported that MDA-MB-231 and MDA-MB-468 are non-sphere-forming cells lines [66]. However, it is not known how the presence of RA could affect mammosphere formation of these cell lines [24] and whether these in vitro assays may reflect the expansion of breast cancer stem and nonstem cells in vivo. Using tumor xenografts, RA increases tumor growth and metastasis of MDA-MB-231 and decreases tumor growth of MDA-MB-468 cells [24].

Although different breast cancer cell lines such as 184A1, SUM149, SUM159, and HCC1954 treated with RA presented a decrease in mammosphere formation [67], the breast cancer MCF-7 cell line responds to RA with an increase of stemness through an ALDH1A1-retinoic acid-HIF-1α-VEGF pathway [26] (Figure 2A). It has been reported that VEGF drives breast and lung cancer-initiating stem cells through the VEGFR-2-STAT3 signaling pathway that upregulates MYC and SOX2 [68][69] (Figure 2B). VEGF contributes to the acquisition of stem cell properties, including self-renewal, survival, and chemoresistance through VEGFR2 receptors, VEGF neuropilin receptors [70][71] and intracrine VEGF receptors [72][73]. 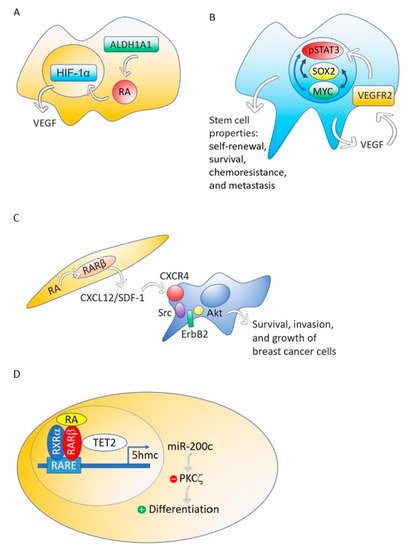 Figure 2. The ALDH1A1-retinoic acid-HIF-1α-VEGF pathway is activated in breast cancer MCF-7 cells (A). VEGF drives breast and lung cancer-initiating stem cells through the VEGFR-2-STAT3 signaling pathway that upregulates MYC and SOX2 gene expression (B). RA, through RARβ, increases the production of CXCL12/SDF-1 in stroma cells and, consequently, activates the Src-ErbB2-Akt signaling pathway in breast cancer cells, promoting survival, cell growth, and invasion (C). When the nontumorigenic, immortalized mammary epithelial cell line, MCF12A and the non-invasive breast cancer cell line T47D were treated with RA, the RA nuclear receptor RARβ associated with a methylcytosine dioxygenase (TET2) that produces DNA demethylation. The consequence is the induction of genes involved in cell differentiation and the activation of miR-200c expression. MiR-200c downregulates stemness targeting the protein kinase PKCζ. RA does not perform these actions in aggressive breast cancers (D).

Although RARβ possesses, in breast cancer cells, many of the functional characteristics of a tumor suppressor, RARβ in the tumor stroma has a dominant role in promoting the growth and progression of mammary epithelial tumors [74]. The mechanism through which stromal RARβ achieves its tumor-promoting effect probably involves the production of CXCL12/SDF-1 in stroma cells and the consequent activation of the Src-ErbB2-Akt signaling pathway in the breast cancer cells (Figure 2C).

2.6. Retinoic Acid Induces Cell Differentiation and Downregulates Stemness in a Nontumorigenic Immortalized Mammary Epithelial Cell Line and a Non-Invasive Breast Cancer Cell line but Does Not Perform These Actions in Aggressive Breast Cancers

More
© Text is available under the terms and conditions of the Creative Commons Attribution (CC BY) license (http://creativecommons.org/licenses/by/4.0/)
Upload a video for this entry
Information
Subjects: Biology
Contributor MDPI registered users' name will be linked to their SciProfiles pages. To register with us, please refer to https://encyclopedia.pub/register :
Betlem Mezquita
View Times: 72
Revisions: 3 times (View History)
Update Time: 22 Sep 2021
Table of Contents
1000/1000
Hot Most Recent