Submitted Successfully!
Thank you for your contribution! You can also upload a video entry related to this topic through the link below:
https://encyclopedia.pub/user/video_add?id=12258
Check Note
2000/2000
Tetrodotoxin for Neuropathic&Cancer Pain Relief
Edit
This entry is adapted from 10.3390/toxins13070483

Tetrodotoxin (TTX) is a potent neurotoxin found mainly in puffer fish and other marine and terrestrial animals. TTX blocks voltage-gated sodium channels (VGSCs) which are typically classified as TTX-sensitive or TTX-resistant channels. VGSCs play a key role in pain signaling and some TTX-sensitive VGSCs are highly expressed by adult primary sensory neurons. During pathological pain conditions, such as neuropathic pain, upregulation of some TTX-sensitive VGSCs, including the massive re-expression of the embryonic VGSC subtype NaV1.3 in adult primary sensory neurons, contribute to painful hypersensitization. In addition, people with loss-of-function mutations in the VGSC subtype NaV1.7 present congenital insensitive to pain. TTX displays a prominent analgesic effect in several models of neuropathic pain in rodents. According to this promising preclinical evidence, TTX is currently under clinical development for chemo-therapy-induced neuropathic pain and cancer-related pain.

Chronic pain is a serious public health and socioeconomic problem that affects millions of people worldwide each year [1]. Some chronic pain conditions can be a consequence of abnormal functioning of the nervous system. In particular, neuropathic pain arises from a lesion or disease of the somatosensory system at peripheral or central level [2]. Peripheral neuropathic pain is the result of injuries to the peripheral nervous system induced by various conditions, including metabolic diseases, infections, mechanical trauma, and chemotherapy [3]. Central neuropathic pain involves injuries to the central nervous system, commonly caused by spinal cord injury, stroke, and multiple sclerosis [4]. The initial lesions involved in both forms of neuropathic pain trigger a cascade of changes that lead to maladaptive plasticity within the nervous system and inevitably to neuropathic hypersensitivity [5]. The prevalence of chronic pain with neuropathic characteristics has been estimated to be in the range of 7–10% [6] and it is expected to rise in the future [3].
Cancer-related pain is a very invalidating symptom, affecting approximately 66% of patients who suffer from cancer [7]. Cancer-related pain frequently presents a mixed pathophysiology, including both nociceptive and neuropathic components, depending on the progression and extension of tumor, being often very difficult to differentiate between acute and chronic pain [8].
Commonly used analgesics for nociceptive pain, such as non-steroidal anti-inflammatory drugs (NSAIDs) and opioids, are less effective in neuropathic [9] or cancer pain [10]. In fact, among cancer patients, those with cancer-related neuropathic pain usually have more trouble to optimally control pain [11]. First-line drug therapies for neuropathic pain include tricyclic antidepressants (TCAs), serotonin-norepinephrine reuptake inhibitors (SNRIs), gabapentinoids, and topical application of lidocaine or capsaicin [12]. These medications can be effective, but carry the potential risk of many side effects [12]. Opioids are lower-line drug options for neuropathic pain, as there is low evidence to support the use of opioids for long-term in chronic neuropathic pain, with possible benefit only for short-term use [9][13]. Therefore, despite the multiple agents available for the treatment of neuropathic pain, current treatment options provide an average reduction of neuropathic pain by 30–50% [9]. The effectiveness of available drugs in the treatment of cancer pain is also very low [14]. The difficulty in optimally treating these pain conditions has prompted significant research into new analgesic agents with fewer side effects.
Tetrodotoxin (TTX) is a potent non-peptide guanidinium neurotoxin that blocks voltage-gated sodium channels (VGSCs) found in puffer fish and other marine and terrestrial animals [15]. VGSCs play an important role in pain and, in particular, numerous studies have shown that some of the TTX-sensitive VGSC subtypes are strongly implicated in the pathophysiology of chronic pain, especially neuropathic pain [16]. Since TTX blocks this subset of VGSCs in a highly selective manner, this agent may have a potential role in relieving neuropathic pain. In fact, this agent is progressing in its preclinical and clinical development, having been evaluated in various clinical trials for the indications of cancer-related pain (NCT00725114, NCT00726011) and chemotherapy-induced neuropathic pain (NCT01655823).

The VGSCs are integral membrane proteins composed of a 260 kDa α-subunit and one or more β-subunits, being the α-subunit responsible for forming the pore and for the main biophysical properties of the channel [16]. Most VGSCs are located at peripheral and/or central nervous system (see Figure 1), and are responsible for generating the Na+ currents that lead to the initiation and propagation of neuronal action potentials [17]. TTX binds to VGSCs by the interaction between the positively charged guanidine group in the TTX molecule with the negatively charged carboxylate residues that are placed around the outer vestibule of the channel; this binding occludes the channel pore and blocks Na+ current [18]. VGSCs are classified according to its sensitivity to TTX. Thus, TTX-sensitive VGSCs (NaV1.1, NaV1.2, NaV1.3, NaV1.4, NaV1.6 and NaV1.7) are blocked by nanomolar concentrations of this neurotoxin, whereas TTX-resistant VGSCs (NaV1.5, NaV1.8, NaV1.9) are inhibited at micromolar concentrations [16]. The mechanism of action by which TTX exerts its analgesic effect is by binding to the α-subunit within the outer vestibule of the VGSC, blocking the entry of Na+ ions through the channel [16][18]. In this manner, TTX reduces the Na+ ionic fluxes required for the initiation and conduction of nerve impulses. 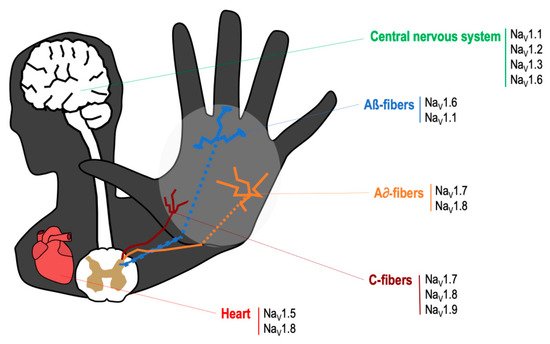 Figure 1. Main location of voltage specific sodium channels in the nervous system.
Nociceptive pain has a physiological protective role in preventing tissue injury. Under normal conditions, primary nociceptive neurons generate action potentials only when they are stimulated with a noxious stimulus [5]. Following nerve injury, nociceptive neurons can begin to discharge spontaneously in an abnormal way, and they reduce their response threshold and increase their discharge frequency, evoked by stimulation. These processes are responsible for inducing hyperexcitability of primary sensory neurons (peripheral sensitization) [5]. In addition, ongoing abnormal activity originating in injured peripheral nerves can be the trigger of central sensitization [19]. Peripheral and central mechanisms, occurring sequentially and concurrently, are responsible for the induction and maintenance of neuropathic pain [5].
VGSCs play a role in persistent and chronic pain as it has been reported that changes on VGSC expression in primary sensory neurons, their abnormal accumulation at the site of injury, as well as posttranslational modifications of these channels, occur after nerve injury, and lead to peripheral sensitization processes [20] (see Table 1).
Table 1. Implication of TTX-sensitive voltage-gated sodium channels in neuropathic pain.
Thus, it has been shown a massive upregulation of the expression of the TTX-sensitive VGSC NaV1.3 in peripheral sensory neurons following nerve injury, in several models of neuropathic pain in rodents [21][23][24][26][33], as well as in patients [28][29]. NaV1.3 subtype might account for neuronal hyperresponsiveness during neuropathic pain as this isoform is not expressed in peripheral sensory neurons in normal condition (only during embryonic development) [20], but as mentioned before, it dramatically upregulates following nerve injury in animals and patients with neuropathic pain (see Table 1). However, specific reduction in the expression of NaV1.3 subtype alone (with intrathecal administration of antisense oligonucleotides or with knockout mice), is not sufficient to reduce behavioral hypersensitivity associated with nerve injury [46][47].
Another TTX-sensitive VGSC that has received much attention is NaV1.7 subtype. This VGSC is predominantly localized in the peripheral nervous system, and many studies have reported a strong correlation between NaV1.7 function and many pain states in rodents and humans [20]. However, the role of NaV1.7 in neuropathic pain remains uncertain, as contradictory results have been reported in rodents and humans, with some studies showing upregulation [27][34][40][41][45], and others downregulation [24][28][39] in primary sensory neurons. In addition, mice lacking NaV1.7 normally developed neuropathic pain after peripheral nerve injury [48]. Interestingly, it has been shown that NaV1.7 could have a more relevant role in the somatosensory system of humans than that of mice, since NaV1.7 is the predominant VGSC in human dorsal root ganglia (DRG) (50% of total VGSC expression), whereas in mice, this subtype represents only a small percentage (18% of total VGSC expression) [49]. In addition, in the same study, it is shown that human DRG neurons in primary cultures treated with paclitaxel (an antitumor drug which is known to induce neuropathic pain), increase the expression of NaV1.7 [49]. Finally, the importance of NaV1.7 for pain in humans is revealed by the existence of loss-of-function mutations of NaV1.7 gene (SCN9A) that lead to congenital insensitivity to pain, and gain-of-function mutations of this gene, which lead to congenital pain disorders characterized by hyperexcitability and extreme pain [50].
More recently, it has been shown that NaV1.6 also plays a relevant role in neuropathic pain of different etiologies, as several studies have reported that NaV1.6 is upregulated during neuropathic pain of different etiologies [35][36][37][38]. In addition, specific inhibition of NaV1.6 with small interfering RNA injected into the DRG [51], or knockout mice [52], reduce neuropathic pain in rodents. On the other hand, the involvement in neuropathic pain of other TTX-sensitive VGSCs present in the nervous system (NaV1.1 and NaV1.2) is not totally clear [16].
TTX-resistant VGSCs which are preferentially expressed in primary afferent neurons (NaV1.8 and NaV1.9) are involved in some pain conditions [20]. However, the role of these VGSC subtypes in neuropathic pain is also unclear since it has been described that they are downregulated in DRG after nerve injury [23][24][53][54]. In addition, experiments with knockout mice show a role of NaV1.9, and to a lesser extent or NaV1.8 in the generation of cold hypersensitivity, but not mechanical hypersensitivity in models of neuropathic pain [55]. On the other hand, the principal cardiac VGSC NaV1.5 is not involved in pain [17], but it is of particular interest, as any VGSC blocker with analgesic potential, should not inhibit NaV1.5 at therapeutic doses, for obvious safety reasons. Interestingly, NaV1.5 is considered a TTX-resistant VGSC [56].

3. Effects of TTX in Preclinical Models of Neuropathic and Cancer Pain

Chronic cancer-related pain encompasses mixed pathophysiology as a consequence of tissue response to the primary tumor or metastases, and it can be considered a type of mixed nociceptive and neuropathic pain [74]. Although TTX has been used in several clinical trials to relieve cancer-related pain in patients (see next section), it is surprising that this drug is almost unexplored in preclinical models of pain induced by cancer, with only one article. Zhen and collaborators [71] evaluated the role of TTX in bone cancer pain. They found that sustained intrathecal injection of TTX (10 μg/kg, once a day) significantly attenuated mechanical allodynia and thermal hyperalgesia in rats with bone cancer.
With only one preclinical study, it seems clear that more research is needed to evaluate the effects of TTX in models of cancer-related pain.

More
© Text is available under the terms and conditions of the Creative Commons Attribution (CC BY) license (http://creativecommons.org/licenses/by/4.0/)
Upload a video for this entry
Information
Subjects: Toxicology ; Neurosciences
Contributor MDPI registered users' name will be linked to their SciProfiles pages. To register with us, please refer to https://encyclopedia.pub/register :
Francisco R. Nieto
View Times: 69
Revisions: 2 times (View History)
Update Time: 21 Jul 2021
Table of Contents
1000/1000
Hot Most Recent