Submitted Successfully!
Thank you for your contribution! You can also upload a video entry related to this topic through the link below:
https://encyclopedia.pub/user/video_add?id=12246
Check Note
2000/2000
Water Phytoremediation
Edit
Upload a video
This entry is adapted from 10.3390/ijerph18105215

Phytoremediation, the usage of plants to remove contaminants, is a technology that has been widely used to remediate pollution in soils, with particular reference to toxic elements.

One of the current challenges due to the global population is providing clean water to the whole world. According to the World Health Organization (WHO) [1], around 2.2 billion people use non-potable and untreated water services from highly unsafe water resources. Some examples of studies in water pollution [2][3] have registered the potential impact of water contamination by heavy metals (HMs), demonstrating a high risk for health issues, such as carcinogenicity and other diseases, associated with polluted water bodies. To keep providing safe and clean water to every person globally, maintenance and infrastructure need to be assured. However, underdeveloped countries often do not have access to services that ensure water quality for distribution and human consumption [4].
The Water Quality Index and other indexes help to understand factors that may influence water quality and make decisions on drinking water quality based on the criteria, such as pH, microorganisms in water, persistence of organochlorides, and heavy metals (HMs), among others [5][6], but not every country has access to water that meets the proposed criteria [7].
The sources of water contamination may be diverse. Nevertheless, they can be grouped into four broad categories: pathogens, inorganic compounds, organic material, and macroscopic pollutants. Inorganic and organic contaminants are the most common, even in treated water [8][9]. Furthermore, inorganic pollutants are more persistent in both waste and treated waters [10][11][12][13][14][15][16][17]. According to the WHO [1], HMs contaminate water, with mercury (Hg), cadmium (Cd), arsenic (As), chromium (Cr), and lead (Pb), among other heavy metals, having a long persistence in the environment. Heavy metal contamination is detrimental to health after prolonged consumption, being linked to conditions such as behavioral disorders, respiratory problems [18], oxidative stress cause by reactive oxygen species (ROS) [19], and immune, skin, respiratory, and endocrine diseases [20], among others. By acknowledging these statistics, we can recognize contaminated water as a global issue that needs to be addressed.
However, the variety of effects a pollutant can cause depends on the nature of the contaminant. HMs represent some of the most common and hazardous pollutants, widespread in soil and water. Some of them (such as Cu, Ni, Mn, Zn, and Co) play an important role in plant metabolism [21]. Many others are hazardous elements to both plants and animals, according to data presented by the United States Environmental Protection Agency [22]. HMs such as As, Hg, Cr, Cd, and Pb can cause hazardous effects in the cardiovascular, dermal, respiratory, and digestive systems, and many other pollutants cause diverse health effects, including asthma, diabetes, cancer, and Parkinson’s disease [23].
Electrochemical, chemical, and physical techniques are used to treat some contaminants, but may not reduce them. Soil leaching, adsorption, and nano-sorbents are some of the strategies that remove metals from soil [24].

Plants are viable for use in the remediation of the organic and inorganic pollutants. (Figure 1) [25]. Based on the process and application, phytoremediation has been commonly divided into the following mechanisms, i.e., rhizofiltration, phytovolatilization, phytodegradation, phytostabilization and phytoextraction [26][27][28][29][30][31][32][33]. The phytoremediation capacity of a plant depends on the molecular and physiological mechanisms [31]. In the same way, understanding the biological processes implicated in the phytoremediation technique is imperative to improve their efficiency [29], which implies significant tolerance to pollutants, greater accumulation capacity [25], higher plant yield and significant pollutant uptake [30]. We discuss below the main properties for each technique applied to phytoremediation mechanistically. 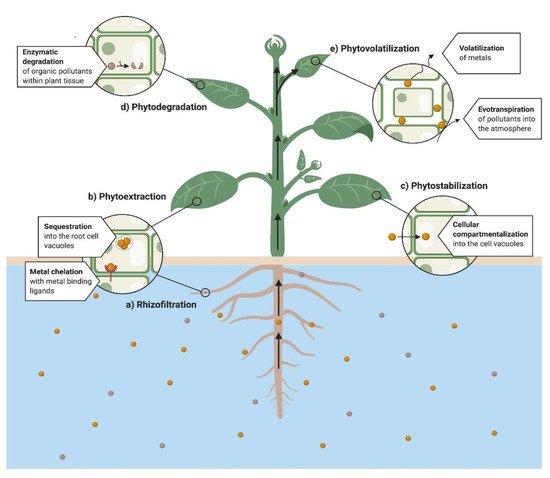 The amount of HM that a plant can accumulate is determined by the capacity of the plant species to sequester the compound or metal and the intercellular mobilization through the plant [30]. Accumulation is a complex process that involves several steps, which include heavy metal transportation through the plasma membrane of root cells, xylem loading, translocation, sequestration, and detoxification at cellular levels in the whole plant [34]. During the absorption, pollutants’ bioavailability can be enhanced through root-associated microorganisms [35] and root exudates [36], and even in hydroponic cultures, microorganisms can establish a symbiotic relationship with the plant’s roots [37][38]. There are several reports about the potential of specific plants for metal phytoextraction in water that can be compared with the current knowledge of the physiological traits [39][40] (Figure 2). 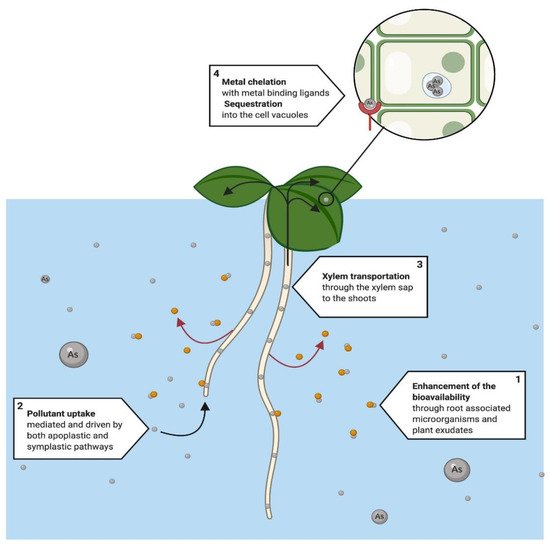 Figure 2. Proposed phytoextraction system that has been mainly used for the removal of heavy metals, such as arsenic (As). The process initiates with the root uptake of the metals (1). Prior to absorption, (2) the bioavailability of metals can be enhanced through root associated microorganisms and plant root metabolites, to improve in the phytoextraction process. Once the metal is available, (3) it is mobilized to shoots and leaves, through the xylem sap. Finally, (4) the pollutant is chelated and sequestered by the cell into the cell vacuoles where it will later will be harvested within the plant tissue for proper disposal [41][42][43].

Rhizofiltration (Figure 3) occurs when plant roots remove pollutants, principally metals, from an aqueous substrate [44]. It involves the absorption, adsorption [25], and precipitation of pollutants from the substrate [44], which first take place in the root surface through different interrelated physicochemical processes, such as chelation, ion exchange, and chemical precipitation through root exudates, among others [44]. 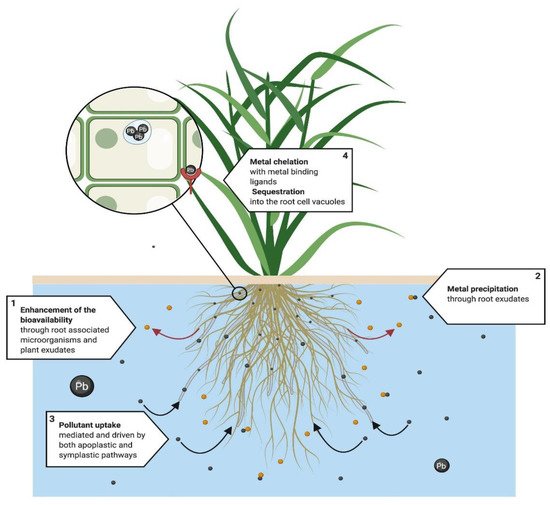 Figure 3. Proposed rhizofiltration system. This technique is mainly used in metal phytoremediation. From a physiological perspective, root exudates and microorganisms (1) enhance bioavailability, followed by (2) the precipitation of metals. (3) Pollutant uptake is mediated and driven by both apoplastic and symplastic pathways. If symplastic pathways fail to translocate the pollutant into leaves and steam, chelation and sequestration takes place mainly in the roots of the plant. (4) Metals are chelated by metal binding ligands, phytochelatins and metalloteines, and finally pollutants are either sequestered into the cell vacuoles and the apoplast or bound to the cell wall [42][43][44][45].
Metal uptake in the roots occurs under the same mechanisms as in the phytoextraction process. However, for the rhizofiltration process, the translocation in the plant cannot be achieved efficiently since the contaminant accumulates mainly in root tissue [42]. After its uptake and mobilization, the pollutant is stored in the vacuoles and the apoplast, or covalently bonded to the cell walls [45], after being chelated by phytochelatins and metallothioneins [43]. Evidence of metal rhizofiltration in water has been shown in several studies [46][47], with high concentrations in root tissue [48][49].

Pollutants can either be entirely mineralized into inorganic compounds or degraded to a stable, less toxic intermediate that is attracted by the cell wall or sequestered by the vacuoles [50]. Enzymes serve as biological catalysts for degradation within the plant tissue [51]. Rhizosphere pollutant degradation improves with an increased microbial metabolic activity and growth, which are enhanced by plant exudates [37][38][52][53]. Thus, plant–microbe interactions are an essential mechanism to achieve the degradation of organic pollutants [54][55][56]. Many examples of the participation of phytodegradation have been reported, which helps us to understand the physiological dynamics and the metabolic pathways that are associated with it [57][58] (Figure 4). 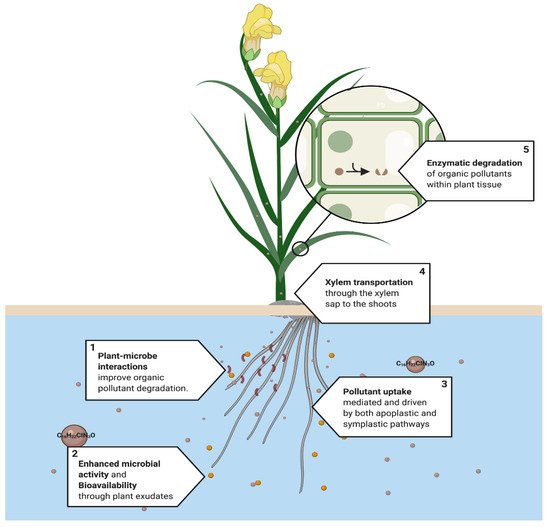 Figure 4. Proposed phytodegradation system. This process is used mainly in the phytoremediation of organic pollutants, such as tebuconazole C16H22CIN2O. (1) Plant–rhizosphere interactions improve the degradation of organic pollutants. (2) Root exudates increase the bioavailability and enhance rhizospheric activity, (3) followed by pollutant uptake, which occurs in the roots and is mediated by apoplastic and symplastic pathways. (4) Then, organic pollutants can be transported to mainly leaves or the roots through the xylem sap to finally (5) be metabolized in the cell to less toxic compounds by the action of plant enzymes. [37][38][52][53].

This is a process occurring in the rhizosphere (Figure 5) to stabilize and immobilize pollutants from the substrate [59], which is the principal advantage of this technique considering that there is no need for harvesting from the source location [60]. This process is compatible with the sequestration of pollutants, mainly metals, within the rhizosphere [37][38][59]. 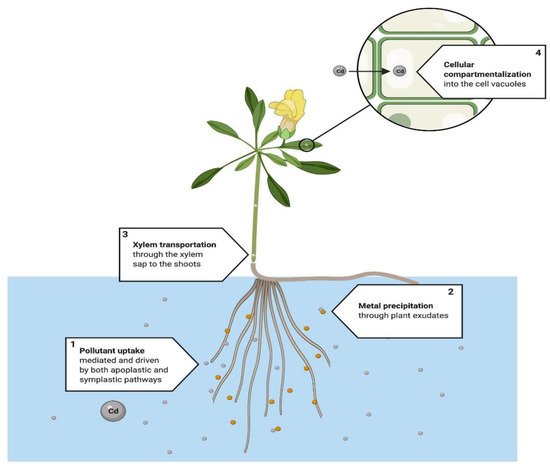 Figure 5. Proposed phytostabilization system. The main actions taken into the plant physiology are: (1) the root uptake of the metal, to start the mobilization into the plant tissues. (2) At the same time, in the areas near the roots start a precipitation process, where some beneficial bacteria may be associated with some metabolites produced by the plant’s root. Finally, (3) the metals are mobilized to the aerial section, and (4) are compartmentalized in different tissues and different organelles, mainly in vacuoles, chloroplasts and sometimes mitochondrias [60][61][62].
Some of the studies reviewed showed a relation between the pollutant characteristics and the plant physiology, such as nutrient uptake, chlorophyll concentration, and biomass production, among others [63][64][65][60]. This may be related to what species are used to stabilize HM.

Phytovolatilization (Figure 6) is described as removing and fractionating pollutants within plant air spaces and later diffusion into the ambient air [66][67]. Thus, plants may volatilize specific metals, such as selenium [60], and volatile organic compounds (VOCs) [68]. The mechanisms that explain the mobilization of HMs are explained in Figure 6. This figure provides information on why most of the processes of the phytoremediation of HMs are focused on processes other than phytovolatilization; however, some metals, such as Cd, may be volatilized following this process. 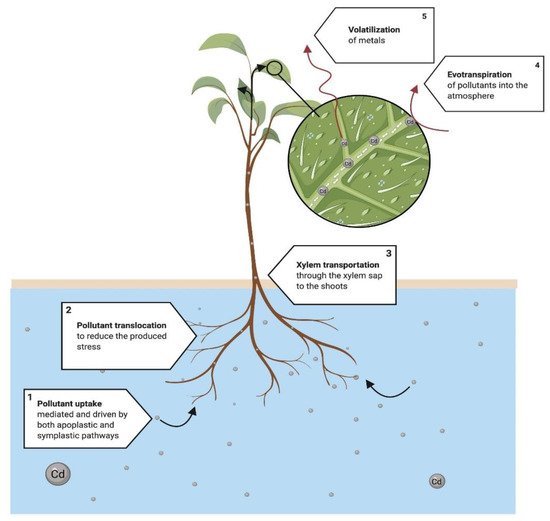 Figure 6. Proposed mechanism of phytovolatilization. (1) The process begins with the uptake and mobilization of the pollutant in the roots. (2) At the same time, the translocation of some ions, mainly metals, starts to reduce the produced stress in plant tissues. (3) The rest of the pollutants are transported to the photosynthetic area and start two main processes: (4) the evapotranspiration acts similarly to a vacuum to extract, in the presence of water, the pollutants and transport them into the atmosphere; meanwhile, (5) the combination of temperature and UV rays volatilizes the pollutants near the stomata of the leaves, mobilizing a great portion of the pollutants into the atmosphere, but transformed into less ecotoxic components/metabolites [66].

The relationships involving the root of plants and microorganisms are well described in soil [69]; even if an aquatic medium may modify these interactions, overall, the processes induced in rhizosphere may be similar [36][37]. Reearchers show a comprehensive description of the interactions in water phytoremediation where microorganisms participate, mostly plant growth-promoting rhizobacteria (PGPR).
Table 2. Different processes in the root-microorganism association during phytoremediation of HMs in water.

The environmental characteristics of the water should be taken into account when phytoremediation systems are induced. Studies have shown the impact on different values during phytoremediation processes in water (Figure 7). For example, the iron removal capacity in some cases depends on the pH values, due its oxidation–reduction potential [70], and for other HMs such as Zn and Cd, bioavailability is directly related with higher pH values [71]. 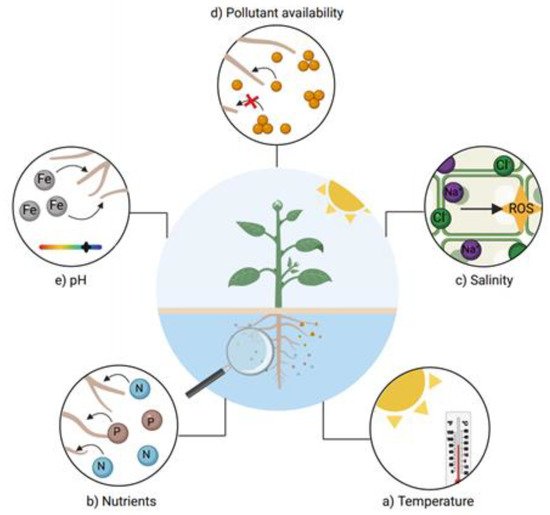 Figure 7. Main factors affecting water phytoremediation. Temperature, nutrients bioavailability, salinity, pollutant (HM) availability and pH are some factors that may delay phytoremediation processes. The interactions occurring in roots play an important role in systems where mobilization of the pollutant via the root is essential, such as HM phytoremediation.
On the other hand, temperature is an important factor in water phytoremediation systems, since many plant species’ growth may be limited by this factor [72]. Other characteristics, such as salinity, limit the species that may be useful for the removal of HMs in water, since not every plant is halotolerant [73]; furthermore, salinity directly affects ionic homeostasis in cells and promotes the formation of reactive oxygen species (ROS) [74]. The uptake mechanisms involved in the uptake of HMs are directly related to the speed of removal [75]; the higher the bioavailability of the metals, the higher the removal speed. Finally, the nutrients absorbed through roots can accelerate or decrease the uptake of HMs. Healthy plants with the correct nutrient balance can absorb water and nutrients faster [76], thus leading to an increased uptake of HMs.