Submitted Successfully!
Thank you for your contribution! You can also upload a video entry related to this topic through the link below:
https://encyclopedia.pub/user/video_add?id=12229
Check Note
2000/2000
MSCs for Osteoarthritis Treatment
Edit
Upload a video
This entry is adapted from 10.3390/biomedicines9070785

Osteoarthritis (OA) has traditionally been known as a “wear and tear” disease, which is mainly characterized by the degradation of articular cartilage and changes in the subchondral bone. Despite the fact that OA is often thought of as a degenerative disease, the catabolic products of the cartilage matrix often promote inflammation by activating immune cells. Current OA treatment focuses on symptomatic treatment, with a primary focus on pain management, which does not promote cartilage regeneration or attenuate joint inflammation. Since articular cartilage have no ability to regenerate, thus regeneration of the tissue is one of the key targets of modern treatments for OA. Cell-based therapies are among the new therapeutic strategies for OA. Mesenchymal stem cells (MSCs) have been extensively researched as potential therapeutic agents in cell-based therapy of OA due to their ability to differentiate into chondrocytes and their immunomodulatory properties that can facilitate cartilage repair and regeneration.

Osteoarthritis (OA) is the most common form of degenerative joint disease, typified by degeneration of cartilage and osseous overgrowth. The incidence of OA occurs in OA affects 13.9% of individuals aged 25 and older, and 33.6% of those over the age of 65 [1]. According to the Arthritis Foundation, more than 30 million people in the United States have OA, with the cases of knee OA are the most common [2]. The most common features of OA include pain, tenderness, swelling, stiffness and locking around the affected joint [3]. The pathogenesis of OA dictates the predominance of destructive processes by altering the tissue homeostasis of articular cartilage and subchondral bone.
OA is characterized by the breakdown of joint cartilage and subchondral bones. Articular cartilage is an essential structural component of the human body. It is composed of specialized cells known as chondrocytes. These chondrocytes generate a substantial number of extracellular matrix (ECM), which is made up of collagen fibers, elastin fibers and proteoglycan. Under physiological conditions, this matrix undergoes a constant remodeling process where both degradative and synthetic enzymes known as matrix metalloproteinases (MMPs) are tightly regulated [4]. These MMPs are released as inactive proenzymes that require enzymatic cleavage to become activated. Once active, MMPs are susceptible to the plasma-derived MMP inhibitor, alpha-2-macroglobulin, as well as tissue inhibitors of MMPs (TIMPs), which are also produced by synovial cells and chondrocytes.
In OA, the MMPs such as collagenases, stromelysins and gelatinases are overexpressed, changing the balance in favor of net degradation and resulting in the loss of collagen and proteoglycan from the matrix [5]. Subsequently, chondrocytes will proliferate and produced increased amounts of proteoglycan and collagen molecules in response to the loss signals. The presence of inflammatory cytokines, interleukin-1β (IL-1β) and tumor-necrosis factor-α (TNF-α), drive the catabolic pathways and perpetuate the progression of OA [6]. However, as the disease progresses, reparative measures are overwhelmed by progressive cartilage breakdown. These lead to the disease progression where the cartilage becomes softer, pitted and rough, and gradually disintegrate from the bone ends. The linings of joints might become inflamed and thickened. In addition, muscles around the arthritic joint become weaker and nerves become more sensitive. These changes might limit movement and result in pain.

MSCs are multipotent cells that can be differentiated into several types of cells including chondrocytes, adipocytes, osteoblasts and myogenic and neuronal cells [7][8][9][10][11] (Figure 1). MSCs can be isolated from various sources, primarily bone marrow, adipose tissue, dental pulp, placenta and umbilical cord, as well as from the skeletal tissues. They are characterized by their fibroblastic shape and specific marker expressions such as CD11b+, CD14−, CD34−, CD45−, HLA-DR−, CD73+, CD90+ and CD105+ [12]. 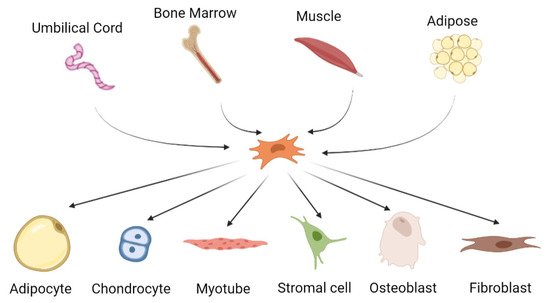 3. MSCs for the Management of Inflammation in OA

Besides having excellent properties for regeneration of tissues, the immunomodulatory properties of MSCs is also one of their superior characteristics. This makes MSCs as a promising cell source to repair the damage of cartilage tissue and at the same time provide immunomodulatory effect to reduce inflammation in OA. MSCs have been extensively studied for their roles in inflammation. MSCs response to inflammation by homing to the damaged tissues, regulating immune and inflammatory responses at the inflamed areas, thus facilitating repair of the damaged tissues (Figure 2). 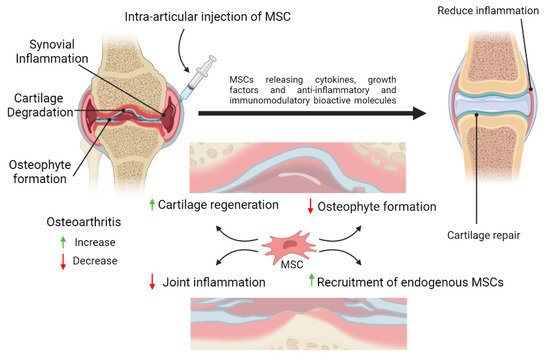 Figure 2. Schematic representation of the potential therapeutic strategies utilizing mesenchymal stem cells (MSCs) therapy for cartilage repair and regeneration. MSCs possess anti-inflammatory and immunomodulatory properties which could reduce inflammation in the joint. MSCs may also assist in the healing process by differentiating into chondrocytes or promoting the proliferation and differentiation of the remaining healthy chondroprogenitors into mature chondrocytes, or both. By releasing trophic factors and cell-to-cell interactions, MSCs may enhance cartilage regeneration and reduce synovial inflammation in the osteoarthritic joint.
In general, MSCs have the capacity to modulate both innate and adaptive immune responses. MSCs have been reported to modulate cytokine production by the dendritic cell and Th1/Th2 cells [55], block maturation and activation of antigen presenting cell (APC) [56], as well as regulate the production of CD4+CD25+regulatory cells [57]. MSCs are also prominent for their immunosuppressive effects through the inhibition of T-lymphocyte activation and proliferation as well as modulating the expression of pro-inflammatory cytokines and chemokines [58][59]. In addition, immunomodulation by MSCs is reported to be mediated via both direct cell to cell contact and also through secretion of soluble factors such as PGE2, indoleamine 2,3-dioxygenase (IDO) and NO [60]. These aforementioned mechanisms could contribute to resolution of inflammation in OA. However, it is still unclear how MSCs facilitate tissue regeneration and inflammation process. Many studies have shown that MSCs’ paracrine activity may play some role in modifying the milieu of the injured tissue, resulting in more favorable circumstances for tissue regeneration [61]. MSCs secrete cytokines to reduce inflammation in surrounding tissues and initiate cartilage repair, which is followed by chondrogenic proliferation and the secretion of ECM proteases and growth factors such as TGF-β IGF-1 and FGF [62].
Intra-articular administration of MSCs into arthritic shoulder of the rat model indicated downregulation of ADAMTS5 expression in the joint cartilage, but increased expression of TNF-α stimulated gene/protein 6 (TSG-6) and inhibited the expression of anti-calcitonin gene related peptide (CGRP) indicating suppression of the central sensitization of pain [63]. Another study using intra-articular administration of umbilical cord-derived MSCs (UC-MSCs) indicated anti-inflammatory and anti-catabolic effects of UC-MSCs as demonstrated by decreased expression of the pro-inflammatory cytokines and MMPs in the synoviocytes of the rabbit model [64].
Many in vitro and in vivo investigations have shown that MSC-derived EVs have significant anti-inflammatory and regenerative effects in OA models. In an experimental study by Vonk et al., EV isolated from human bone marrow MSC altered the TNF-α-mediated upregulation of COX2 and pro-inflammatory interleukins, i.e., IL-1α, IL-1β, IL-6, IL-8 and IL-17 when co-cultured with TNF-α-stimulated OA chondrocyte [65]. EVs derived from human AD-MSCs demonstrated chondroprotective effects by decreasing the release of inflammatory mediators (e.g., TNF-, IL-6, PGE2 and NO) and MMP activity, while increasing the production of the anti-inflammatory cytokine IL-10. In a recent study, exosomes from embryonic MSCs reduced inflammatory response, enhanced cartilage repair and subchondral bone healing, reversed IL-1-mediated inhibition of sulfated glycosaminoglycan synthesis, and decreased IL-1-induced production of nitric oxide and MMP-13 via adenosine-mediated activation of AKT, ERK and AMPK pathways in an OA model of the temporomandibular joint of immunocompetent rats [48]. The immunomodulatory properties of MSCs and MSC-derived EVs may help decrease inflammation and prevent the progression of OA, making them potential therapeutic sources for OA.