Submitted Successfully!
Thank you for your contribution! You can also upload a video entry related to this topic through the link below:
https://encyclopedia.pub/user/video_add?id=12203
Check Note
2000/2000
Myotendinous Junctions
Edit
Upload a video
This entry is adapted from 10.3390/ijms22136983

The myotendinous junction (MTJ) anchors the terminal sarcomeres to the extracellular matrix (ECM). The MTJ is the site of contractile force transmission from the muscle to the tendon, and the higher contact area between the muscle and tendon provides resistance to the muscle contractile force [1].
Joint immobilization promotes inactivity, which leads to muscle atrophy via disuse. Moreover, joint immobilization promotes diverse deleterious effects in the post-immobilization period in the form of impaired muscle performance [2] and reduced myotendinous interface [3][4].
Muscle fibers in normal conditions contain multiple nuclei that are peripherally organized. However, in communicating junctions (such as MTJ), the nuclear position is specialized and demonstrates adaptations associated with mechanical stimulus [5].
Recently, a study identified telocytes as a new element that are adjacent to MTJ [6] in the interstitium. They are characterized by telopods (long and thin projections) and pods (dilated segments) with mitochondria and endoplasmic reticulum [7]. The telopods establish communication and paracrine activity that help different cell types interact, including blood vessels, nerve cells, immune cells, fibrocytes, stem cells, granular cells, and others, under normal and pathological conditions [7][8][9].
The period after joint immobilization is a critical period toward recovery as well as for the mitigation of deleterious effects in muscle fibers and postsynaptic components [10]. Alterations in the ligand proteins of ECM, laminin, and dystrophin in the post-immobilization period [11] reduce the extensibility and plasticity properties of muscle fibers, rendering them susceptible to muscle injuries. However, stimulus in the form of physical activity revealed positive responses to these characteristics [12][13].
In the present study, we investigated the components of the MTJ and their adaptations as well as the associated elements that are triggered following aquatic training (AT) after joint immobilization. 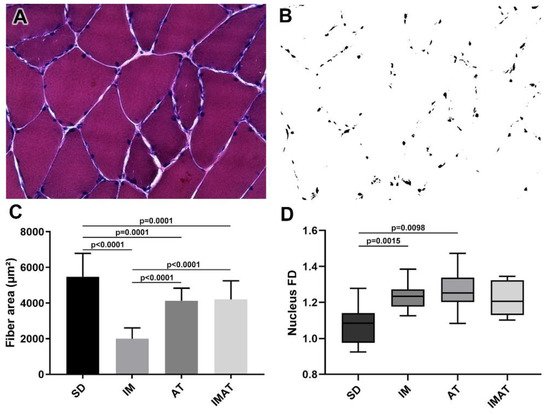 Through the ultrastructural descriptions of the MTJ, its morphology and plasticity as well as associated elements were revealed, i.e., telocytes (Figure 3). We observed branched sarcoplasmatic invaginations and a telocyte surrounding the MTJ near a blood capillary in the SD group. 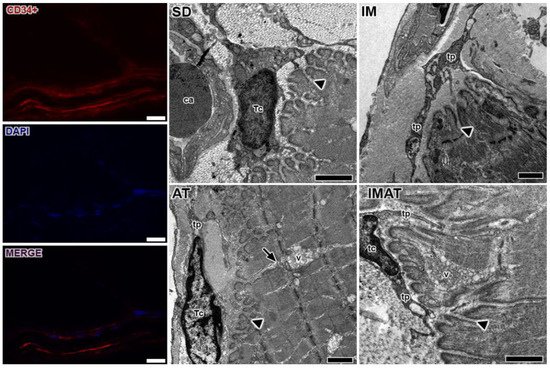 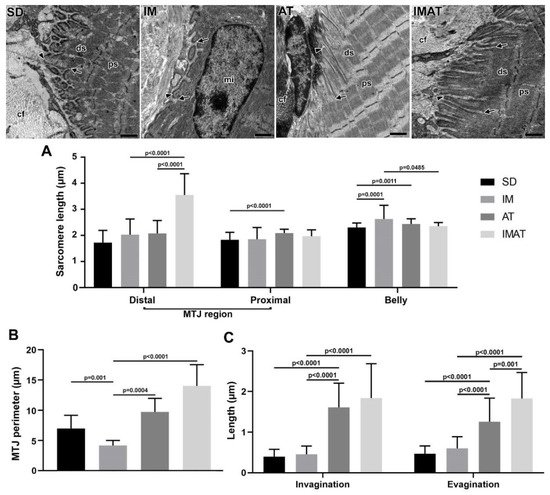 The results of this study revealed the joint immobilization effect of muscle atrophy due to disuse. The study also showed the effect and repercussion of AT as a rehabilitation method for the muscle belly and the muscle-tendon complex as well as other parameters, including the nucleus, sarcomere, contact perimeter, and telocyte.

More
© Text is available under the terms and conditions of the Creative Commons Attribution (CC BY) license (http://creativecommons.org/licenses/by/4.0/)
Upload a video for this entry
Information
Subjects: Biology
Contributor MDPI registered users' name will be linked to their SciProfiles pages. To register with us, please refer to https://encyclopedia.pub/register :
Lara Rocha
View Times: 141
Entry Collection: Tight Junction and Its Proteins
Revisions: 2 times (View History)
Update Time: 20 Jul 2021
Table of Contents
1000/1000
Hot Most Recent