Submitted Successfully!
Thank you for your contribution! You can also upload a video entry related to this topic through the link below:
https://encyclopedia.pub/user/video_add?id=11949
Check Note
2000/2000
HDPs in Skin Wound Healing
Edit
Upload a video
This entry is adapted from 10.3390/biom11070952

Cutaneous wound healing is a vital biological process that aids skin regeneration upon injury. Wound healing failure results from persistent inflammatory conditions observed in diabetes, or autoimmune diseases like psoriasis. Chronic wounds are incurable due to factors like poor oxygenation, aberrant function of peripheral sensory nervature, inadequate nutrients and blood tissue supply. The most significant hallmark of chronic wounds is heavily aberrant immune skin function. As the first line of defence against pathogenic bacterial infection, host defence peptides (HDPs) are a critical element in preventing biofilm-associated infections. A decline in sufficiently effective antibiotic treatments due to growing problems with antibiotic resistance may be ameliorated with alternatives to conventional antibiotics like peptides with antimicrobial properties. Aside from bacterial pathogen inactivation by disrupting their cell membranes, host defence peptides also have immunomodulatory properties, due to their ability to stimulate the cross-talk between immune cells promoting cutaneous wound healing in a healthier manner.

Cationic peptides play a primarily role in maintaining the skin barrier’s integrity and cutaneous tissue restoration during injury [1]. Due to expanding the effects of antimicrobial peptides on bacteria, HDP have been assigned the fundamental biological role in innate immunity [2]. Due to their lack of adaptive immune systems, arthropods and plants rely on their HDPs’ primary defence response [3][4]. In higher eukaryotes, the levels of the host’s defence peptides patrolling through signalling networks of the immune response are significantly more abundant, as their multifaceted role is more complex [5].

In humans, two main classes of host defence peptides have been identified: defensins and cathelicidins (Figure 1). However, there are also a variety of other small peptides expressed by epithelial cells like Substance P [7], neurotensin [8], granulysin [9], calprotectin [10], adrenomedullin [11], MRP8/MRP-14 [12] and RNase A superfamily [13], which are also important wound inflammatory biomarkers. 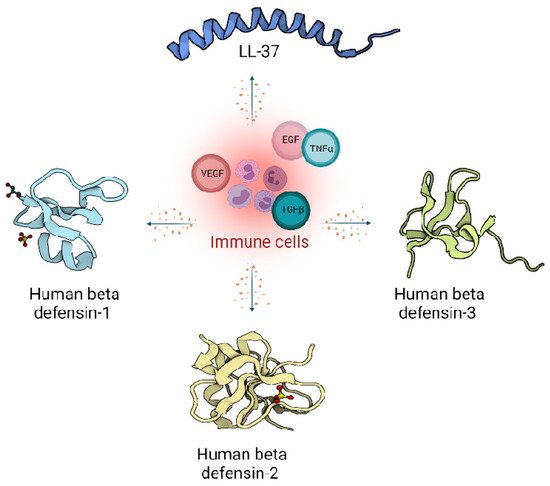 Peptides from the defensin family are small peptides that are widely distributed across species, including humans. Human defensins (HDs) are produced in leukocytes and are also secreted by different epithelial cells and mucosal tissues [15]. The mature defensins are described as short (28–42 amino acids length), cationic (net charge +1 to +11), amphipathic peptides with a highly conserved tertiary structure of a triple antiparallel β-sheet fold arrangement accommodating the six cysteine residues connected with three disulphide bridges [16].

Moreover, depending on the size, location, spatial conformation, and spot where the cysteines lay within the peptide chains, they are categorised as α-defensins, β-defensins and θ-defensins [16][17]. In humans, only α and β-defensins are present, while structurally different, cyclic θ-defensins have been identified in rhesus macaques [16][18].

Additionally, the HDs have antimicrobial activity against various strains of Gram-positive and negative bacteria [19], fungi [20] and viruses such as the herpes simplex virus [21].

In humans, there are 6 α-defensins: HNPs1–4 and human α-defensins 5 and 6 (HD5 and HD6) [19][22]. HNPs 1–3 (human neutrophil peptides) differ by single amino acid substitutions and are predominantly produced by neutrophils.

Endogenous cathelicidins are stored at high concentrations as inactive precursors in granules of mammalian neutrophils and mast cells. In contrast to defensins, cathelicidins are predominantly α-helical, amphipathic, cationic (possessing a net positive charge of 2–9) and consist of 23–37 amino acids [25].

The active form of peptide is formed once the cathelin domain is cleaved by serine proteases upon neutrophils degranulation and secretion of peptides [27].

The gene for hCAP-18, named CAMP, encodes the human cathelicidin. LL-37, the only member of the cathelicidin family identified so far in humans, is present in the secondary (specific) granules of neutrophils, macrophages, and epithelial cells [28]. Human cathelicidin hCAP-18, is processed by proteinases into several extracellular cleavage products, with LL-37 being one of them [29]. Cathelicidins play an important regulatory role in the inflammatory response [30]. Many studies support immunomodulatory actions over the antimicrobial actions of cathelicidins [2][25]. However, the constitutive generation of the cathelicidins across the various species provides them with strong antimicrobial protection from bacteria [31], viruses [32] or fungi [33].

Factors affecting wound healing can be categorised into systemic and local factors. Systemic factors are present at all times in the individual, as seen in diseases such as diabetes, stress, obesity and age, while local factors include factors, such as infection, oxygenation and foreign bodies, which directly influence the wound locally [34]. The local factors lead to high levels of pro-inflammatory cytokines and ROS, impaired cell and protease function and a lack of growth factors [35]. HDPs have been demonstrated to influence many local factors, such as regulating expression of cytokines [36], chemokines [37], proteases [38], growth factors [39] and immune cell activity [40][41][42] (Table 1).

Many acute and chronic inflammatory disorders have been correlated with dysregulation of the natural HDP response [2][54]. Although the reciprocity of either deficiency or overproduction of HDPs in the presence of inflammation and thus balance between pro- or anti-inflammatory effects is not so easy to define directly, this can lead to a pathological inflammatory response [55][56]. Endogenous host defence peptides, stored intracellularly at high concentrations as inactive precursors in granules, are released locally at infection and inflammation sites, whereas the expression of others is induced in response to pathogen-associated molecules [57].

The role of the immune cells in the inflammatory phase is intended to eliminate intracellular pathogens, and this is achieved by producing host defence peptides, which in turn promote the robust recruitment of immune cells such as neutrophils, monocytes/macrophages, dendritic cells, and T cells [2]. Altered levels of either pro- [58][59] or anti-inflammatory [37][60][61] cytokines have been reported in inflammatory conditions. A persistent inflammatory environment has been demonstrated to affect not only the function of immune cells [62], but also the composition of the host defence peptides detected at the wound site [63] (Figure 2). 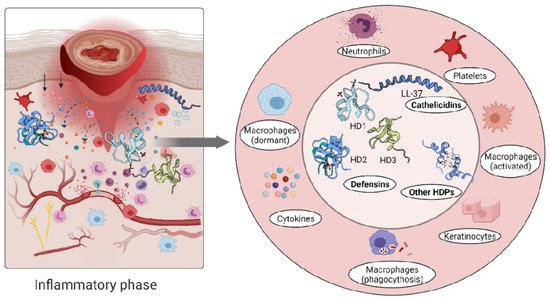 Figure 2. Immune response triggers skin cells to secrete host defence peptides. The secreted peptides are involved in antibacterial killing but also the recruitment of other immune cells to the wounded area.

Defensins and cathelicidins family members have distinct roles in various disease states, and many studies support the potential synergistic roles of defensins and cathelicidins in cytokines chemoattraction in skin immune responses [47]. Tightly coordinated actions of hBD-2, -3 and -4 along with LL-37 induce secretion of IL-18 by keratinocytes through activation of the p38 and ERK1/2 MAPK pathways [47]. Under inflammatory skin conditions, high expression levels of keratinocyte hBD-2 induced by IL-17A and TNFα indicate that it may be considered as a marker for disease severity [64].

Inflammatory skin conditions like psoriasis are linked to elevated levels of both IL-1a and S100A7 (also known as psoriasin) and an increased signalling axis composed of NF-κB/p38MAPK/Caspase-1/IL-1a, which regulates S100A7 [49]. Moreover, the increased expression of LL-37 is associated with overproduction of IFNγ in psoriatic lesions, while hBD-2, hBD-3 and lysozyme can activate plasmacytoid dendritic cells (pDCs) in co-action with LL-37 [48]. LL-37 evokes pro-inflammatory chemotaxis through binding to the formyl peptide-like receptor-2 (Fpr-2), a cell sensing element for microbial products [44]. The human host defence peptide LL-37 binds to these G protein–coupled receptors and activates mucosal immune response through recruitment of leukocytes [44]. In contrast, LL-37 can mediate anti-inflammatory responses such as secretion of anti-inflammatory cytokines like IL-1RA [45]. Another prominent feature of the neutrophil released cathelicidins is enhanced SMAD2/3 and STAT3 phosphorylation in the presence of transforming growth factor-β (TGFβ), shifting the T-cells subset towards Th17 rather than the Th1 phenotype, resulting in Th17 but not Th1 cells protection from apoptosis [46].

Atopic dermatitis (eczema) is another pathological skin condition [65]. Unlike the psoriasis which is characterised by elevated levels of innate immunity peptides, in atopic dermatitis, host defence peptide levels are not abundant and together with skin dryness make affected areas prone to infections [66].

It has been shown that LL-37 peptide induces growth factors, such as EGF and VEGF, but also binds their receptors [43][67]. Aberrant vascularization during wound restoration in mice lacking the CRAMP (the murine homologue of LL-37/hCAP-18), shows that the peptide can stimulate endothelial cells, increasing the proliferation rate and thus enhancing the dermal neovascularization [50].

Furthermore, high levels of hBD-2 and hBD-3 detected at wound sites promote keratinocyte migration and proliferation, indicating their involvement in the re-epithelialization of the healing epithelium [51][68]. A relatively recent study demonstrated that topical insulin delivery to the wound enhanced the levels of extracellular-signal regulated kinase (ERK) and protein kinase B (Akt) [69]. ERK is a part of a phosphorylation pathway that activates gene transcription leading to cell [70][71] and increased Akt stimulated angiogenesis through activation VEGF signalling [72][73] (Figure 3). 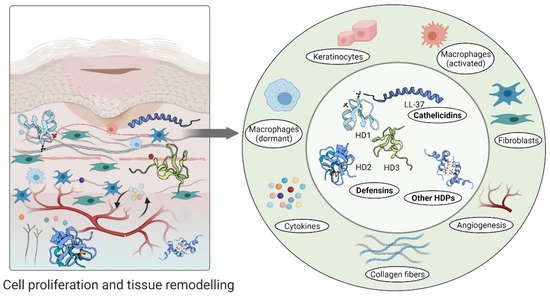 The direction of macrophages polarisation into relevant phenotypes during different phases of wound healing (i.e., polarisation to a pro-inflammatory phenotype during the inflammatory phase and anti-inflammatory phenotype during the subsequent proliferation and remodelling phase) [74][75] is controlled by many factors, while different HDPs (like LL-37) promote polarisation to M1 macrophages [30]. Similarly, elevated levels of interleukin-6 (IL-6), IL-1β, tumour necrosis factor-α (TNFα) and chemokine CCL3 in RAW264.7 cells can be dampened by Cathelicidin-WA (CWA) [52]. CWA peptide suppresses the expression of TLR-4 and the phosphorylation of STAT1 and NF-κB, downregulating the activity of pro-inflammatory macrophages while stimulating the phosphorylation of STAT6 and activating E. coli K88-induced anti-inflammatory macrophages [52].

An aberrant response described as overgrowth of fibroblasts and endothelial cells may be due to high concentrations of psoriasin in wound fluid and granulation tissue [53]. Psoriasin stimulates the tissue remodelling by inhibiting the excessive production of collagen, fibronectin and TGFβ formation in fibroblasts. In keloid-derived fibroblasts, psoriasin production is decreased [53] (Figure 3).

More
© Text is available under the terms and conditions of the Creative Commons Attribution (CC BY) license (http://creativecommons.org/licenses/by/4.0/)
Upload a video for this entry
Information
Subjects: Dermatology
Contributor MDPI registered users' name will be linked to their SciProfiles pages. To register with us, please refer to https://encyclopedia.pub/register :
håvard jenssen
View Times: 64
Revisions: 2 times (View History)
Update Time: 13 Jul 2021
Table of Contents
1000/1000
Hot Most Recent