Submitted Successfully!
Thank you for your contribution! You can also upload a video entry related to this topic through the link below:
https://encyclopedia.pub/user/video_add?id=11907
Check Note
2000/2000
Insulin Signaling
Edit
Upload a video
This entry is adapted from 10.3390/nu13072229

Ample amounts of basic macromolecules such as carbohydrate, protein, and fat are crucial for optimum bodily function. Insulin resistance was proven in numerous studies to be the onset of many metabolic disorders in humans, especially diabetes mellitus [1][2]. An elevated concentration of certain plasma amino acids was intricately linked as one of many diverse factorial precursors in the development of diabetes. Branched-chain amino acids (BCAAs) have been found to be escalated in people with insulin resistance, and therefore may serve as possible biomarkers in the early detection upon onset of the disease [3][4][5].

The status of diabetes has changed from being classified as a subdued disorder of elderly people to being a major cause of morbidity and mortality affecting the youth and middle-aged people [6][7]. According to the Diabetes Atlas 9th edition 2019, published by the International Diabetes Federation, there are around 462 million people living with diabetes globally, and the number is expected to rise unless urgent preventive measures are taken. T2DM is characterized by the amount of blood sugar/glucose (mg) per deciliter (dL) of blood. Normal blood sugar levels measured with a fasting blood glucose test are ≤99 mg/dL, while any reading greater than 125 mg/dL is associated with a higher risk of developing insulin resistance, or worse, diabetes [8].

Insulin resistance indicates the inability or inefficiency of the body to respond well to hormone insulin [9]. The pancreatic islet of Langerhans consists of three types of cells, i.e., alpha cells, beta cells, and delta cells. Peptide hormone insulin is secreted by β-cells of the islet, which function as messengers that instruct designated peripheral insulin-sensitive cells in the body to take up glucose. Any defect that interferes with this process would potentially promote malfunction of the pancreas, because constant ectopic production of insulin is needed to compensate lower blood sugar levels [10].

Branched-chained amino acids (BCAAs) and aromatic amino acids (AAAs) were shown to be associated with insulin resistance and may serve as possible markers prior to the onset of diabetes. Upon comparison with the metabolic marker homeostatic model assessment of insulin resistance (HOMA-IR) for diabetes, recent studies provide evidence that BCAAs and AAAs are closely correlated with the progression of T2DM [2][3][4][5][11][12][13]. BCAAs are essential amino acids that include leucine, isoleucine, and valine and account for 40% of total amino acids needed by mammals [14][15]. The tampering of BCAAs in the impairment of insulin action was broadly reviewed as a consequence from the downregulation of BCAA metabolism in muscle controlled by the mTOR pathway, which is known to be regulated by insulin and leucine.

The direct and accurate elucidation correlating to the actual involvement of AAAs with the impairment of insulin action still demands more research. A study in 2016 examined the global transcript profile of adipose tissue and skeletal muscle; the peripheral cells and the microarray analysis results revealed the upregulation and downregulation of certain genes. Upregulated genes are involved in the adaptive immune response, which scans for the inflammation and infiltration of inflammatory cells, both of which induce insulin resistance over time. The downregulated genes are those responsible for the metabolism of AAAs, which evidently explains the etiology behind the elevated plasma concentration of AAAs in insulin

Faulty insulin receptor activity often breeds many metabolic complications in consideration that insulin influences the majority of cellular metabolism processes. Moreover, metabolic disorders such as insulin resistance are eminently known to be provoked through impaired action of this receptor [9][16]. At present, the G-protein-coupled receptor (GPCR) highlights its ability to induce the insulin signaling pathway (Figure 1) independent of insulin perception, which is mediated through cross-talk with the insulin receptor [17][18][19][20]. A detailed review on the association of amino acids with the prevalence of insulin resistance is presented in this review.

Notably, there are various factors recognized to trigger insulin resistance (Figure 2): for instance, obesity [21][22][23][24], critical hyperglycemia [7][25], low-grade inflammation [23][24], the overproduction of reactive oxygen species (ROS) [25][26], mitochondrial dysfunction [27], impaired insulin signaling pathway [28], short-chain fatty acids (SCFAs) [29], and amino acids [2][4][30][31]. One study by Jenganathan et al. showed that amino acids are implicated with IR, although this is rather temporal and reversible. The incubation of myotubes with amino acids and insulin significantly increases the level of phosphorylation and activation of the mTOR pathway; however, this is reversible as well [31]. 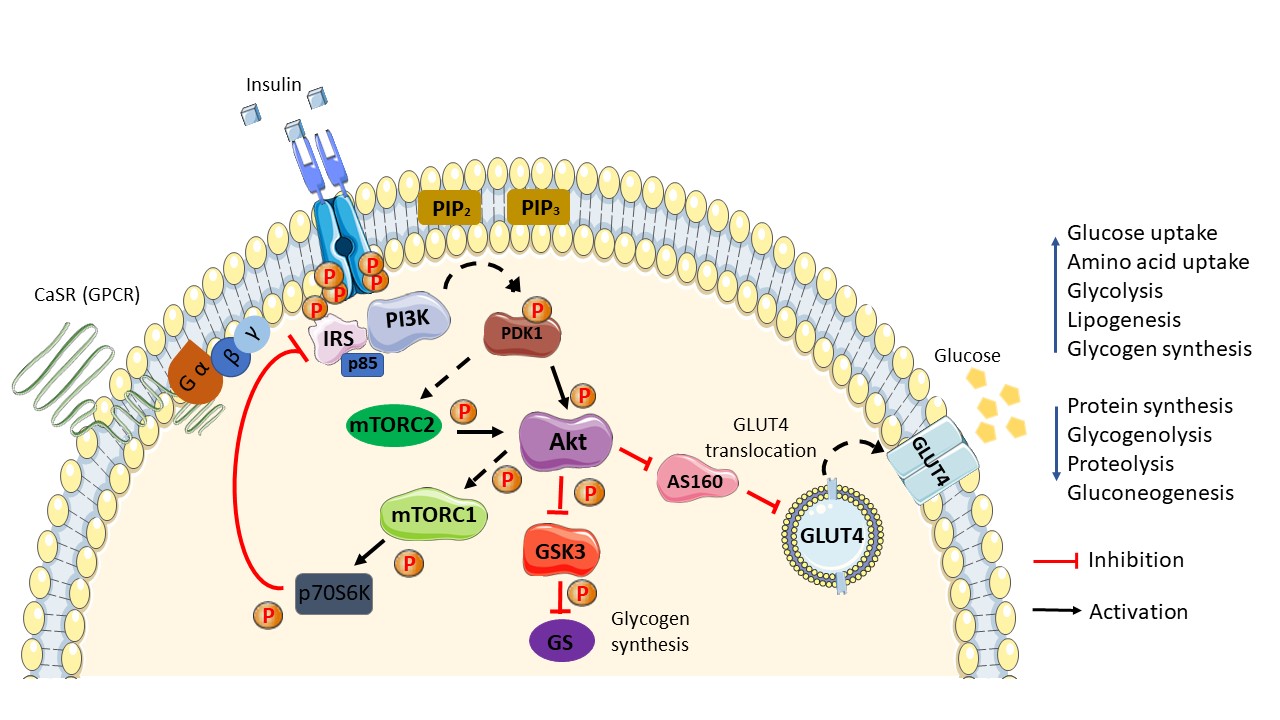 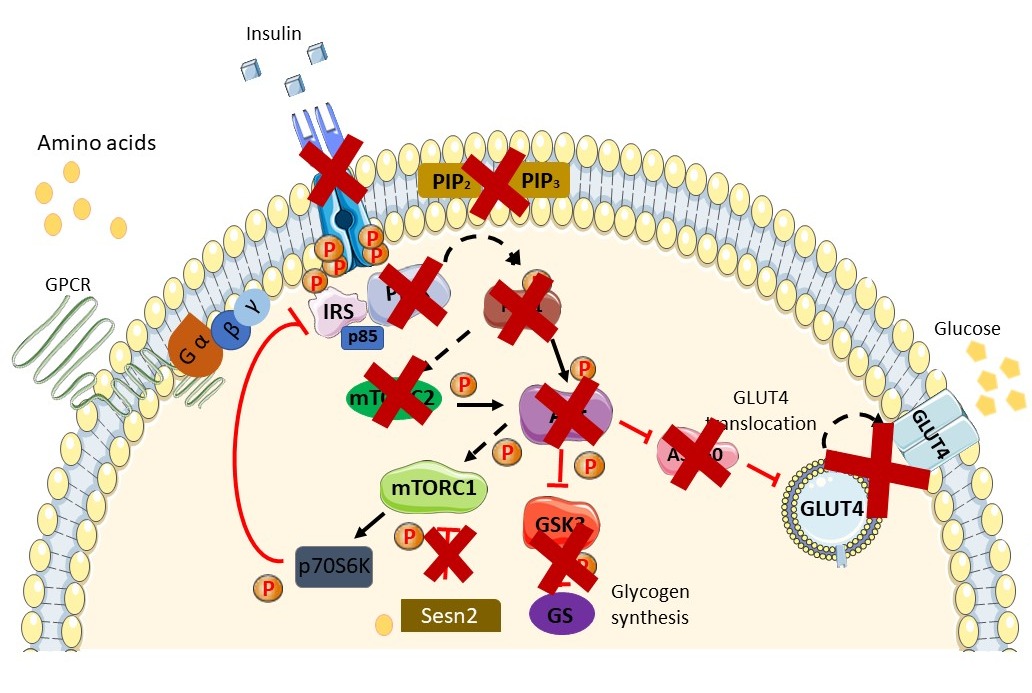 G-protein coupled receptors (GPCRs) are the largest plasma membrane receptor targeted by a myriad of drugs approved by the FDA [35][36]. GPCRs are characterized through their infamous seven transmembrane domain, spanning the plasma membrane with its extracellular N terminal forming complementary pockets where ligands bind, with an intracellular C terminal domain that bridges the receptor to its G-protein domains, i.e., Gα, Gβ and Gγ. GPCRs recognize a broad variety of ligands including chemicals, hormones, and proteins, portraying its fair share as an important initial regulator to virtually all physiological activities in the body. Each group shares a similar signal activation mechanism that, upon binding of the ligand with the receptor and conformational alteration, the Gα subunit which was previously bound to GDP (inactive) now binds to GTP and dissociates itself from the complexes to start the signaling cascade.

Reassuring an unflawed cell signaling pathway is a complex process that requires the engagement of various regulatory molecules (ligands, receptors, and responses). Cross-talk between receptors has been acknowledged for decades and is required to accomplish a good signaling transduction pathway. Nevertheless, a study in 2017 suggested that GPCR angiotensin receptor type 1 (AT1R) and β-adrenergic receptors (βARs) are associated with the insulin signaling pathway through the PI3K pathway and RAS/RAF/MEK/ERK1/2 signaling cascade, respectively [37]. The nutrient sensing receptor falls under class C GPCR, which is characterized by a large Venus flytrap (VFT) ligand-binding extracellular domain with obligate dimerization action (homo or heterodimer) and promiscuous ligand selection [38].

is a G-protein coupled receptor described by various publications to sense phenylalanine derivatives and tryptophan as its agonist and is abundantly expressed on β-cells of the pancreas. GPR142, activated by tryptophan, is a natural precursor to niacin and serotonin. The activation of this GPCR enhances glucose-stimulated insulin secretion. Recent publications have highlighted that the increased level of tryptophan in more serious IR subjects displayed positive outcomes after inactivation of the receptor knockdown in mice, and observations with its antagonist (CLP-394) have proven beneficial [39][40].

Class C GPCR, GPRC6A, responds to L-amino acids such as lysine and arginine, which bind to its large Venus flytrap N terminal extracellular receptor. GPRC6A is also seen to respond to decarboxylated osteocalcin (OCN), which improved insulin activity in wild-type mice while providing the opposite effect inGpcr6a−/−mice. This receptor is reproduced in numerous animal species [41].

After its discoveries, T1R2 and T1R3 have been intimately assigned to potentially regulate nutrient uptake and digestion. Consequent to dietary carbohydrate and protein consumption, a higher expression of T1R3, T1R2 and α-gusductin is noticed in conjunction with the available nutrients [42][43]. In pancreatic β-cells, AA binding to T1R1/T1R3 stimulates the MAPK ERK1/2 pathway, which is known to mediate insulin expression and exocytosis via the nutrient-dependent insulin gene transcription. Incretins function upon taste perception to better facilitate digestion through enhanced insulin secretion, the suppression of glucagon secretion, and overall improvements in satiety.

An ex vivo functional study of insulin receptors of rat taste cells in organoids disclosed that the genetic expression of proteins related to the taste cells was significantly reduced (gustducin, T1R3, SGLT, and GLUT) in an insulin-enriched environment. Reminiscent to the above notion, treatment with rapamycin did naturally reverse faulty gene expression, and normal amounts of taste cells were restored [44]. Parallel to justifying the above hypothesis, cells with defects in their taste perception were observed to upregulate the genetic expression of mandatory proteins (transport proteins) to normalize the situation [45]. Therefore, it is concluded that the availability of taste receptors is governed by nutrient availability.

Calcium-sensing receptor (CaSR) is a class C GPCR that supervises parathyroid hormone (PTH) secretion via extracellular calcium concentration and calcium absorption at the kidney [46]. Apart from calcium, CaSR also responds to amino acids, and previous studies have shown that CaSR is involved in glucose hemostasis [47]. As discussed earlier in the paper, activation of the mTOR pathway negatively blunted insulin signaling, whereas taste perception continuously induced insulin secretion through the AMPK pathway; Although evidence of the direct involvement of CaSR on amino acid-induced insulin resistance has not yet been reported, the plausibility is there, because the receptor is also activated by amino acid.

function to induce insulin secretion, suppress glucagon action, and improve satiety. AA drinks administered orally resulted in higher insulin secretion and action in comparison to AAs administered intravenously A whey protein diet improved satiation significantly due to its amino acid constituents, displaying improved insulin action and decreased hunger [48]. The above situation can be intimately linked to the nutrient-sensing ability of class C GPCRs, because the oral administration of BCAAs induces incretin secretion, which helps in overall satiation and increases insulin response, whereas intravenous BCAA does not [49].