Submitted Successfully!
Thank you for your contribution! You can also upload a video entry related to this topic through the link below:
https://encyclopedia.pub/user/video_add?id=11868
Check Note
2000/2000
Paraoxonase-1 and Chemokine Ligand 2
Edit
Upload a video
This entry is adapted from 10.3390/biom11070971

Infectious and many non-infectious diseases share common molecular mechanisms. Among them, oxidative stress and the subsequent inflammatory reaction are of particular note. Metabolic disorders induced by external agents, be they bacterial or viral pathogens, excessive calorie intake, poor-quality nutrients, or environmental factors produce an imbalance between the production of free radicals and endogenous antioxidant systems; the consequence being the oxidation of lipids, proteins, and nucleic acids. Oxidation and inflammation are closely related, and whether oxidative stress and inflammation represent the causes or consequences of cellular pathology, both produce metabolic alterations that influence the pathogenesis of the disease. In this entry, authors highlight two key molecules in the regulation of these processes: Paraoxonase-1 (PON1) and chemokine (C-C motif) ligand 2 (CCL2).

Tissues produce reactive oxygen species (ROS) as a metabolic by-product in response to environmental factors such as an imbalanced diet or an infectious process. ROS react with lipids, proteins, and nucleic acids and result in alterations in cell structure and function [1]. The organism has enzymatic and non-enzymatic antioxidants to block the harmful effects of ROS. However, these protective systems can be overwhelmed in disease states. An inflammatory reaction is generated when oxidative equilibrium is disrupted. For example, in infectious diseases, ROS production by host macrophages is an important part of the defense mechanism against infecting bacteria or viruses, and the imbalances produced can trigger an inflammatory reaction [2]. In turn, inflammation can lead to a further increase in oxidative stress and thus enter a vicious cycle that can aggravate the disease [3][4]. Independently of whether oxidative stress and inflammation represent the causes or the consequences of cellular alterations, an overwhelming amount of evidence indicates that both processes contribute to the pathogenesis of many diseases. The role played by macrophages and their polarization need to be considered in detail in the setting of chronic inflammatory diseases [5]. These diseases are associated with an increase in M1, or “classically activated” macrophages, and a decrease in M2, or “alternatively activated” macrophages [6][7][8]. Chemokines are involved in macrophage polarization, while directing the traffic of immune cells to sites of inflammation and activating the production and secretion of inflammatory cytokines [9]. Monocytes migrate to the site of inflammation and differentiate into macrophages when the chemokine (C-C motif) receptor (CCR2) interacts with the chemokine (C-C motif) ligand 2 (CCL2): a key process in the development of inflammatory diseases [10]. Recent studies indicate that other chemokines and chemokine receptors also play important roles. For example, the CCL5/CCR5 complex has been related to cancer and infection [11][12][13][14].

2. The Protective Role of Paraoxonases on CCL2 Expression, Mitochondrial Function, and Metabolism

Several lines of research suggest that the PON family of enzymes play a prominent role in the protection of cells against mitochondrial dysfunction and metabolic alterations. Most studies in this field have been conducted on PON2 because the general consensus is that this is the major intracellular enzyme. For example, PON2 has been reported to reduce the unfolded protein response (UPR) accompanying oxidative stress and UPR-derived caspase activation in human vascular cells [15][16][17]. In addition, the expression of genes related to endoplasmic reticulum stress was increased in macrophages from apolipoprotein E and PON2 double deficient mice, compared to those that were only apolipoprotein E -deficient [18]. These authors observed that treatment of macrophages from apolipoprotein E and PON2 double deficient mice with an inducer of endoplasmic reticulum stress resulted in mitochondrial dysfunction, increased oxidative stress, and increased cell apoptosis. Further studies in several experimental models have added more evidence that PON2 protects mitochondrial function and prevents apoptosis [19][20][21].
From the above-mentioned data, it is inferred that PON2 does indeed play a protective role in mitochondrial function, but this is not so clear regarding PON1. Data suggest that this enzyme also protects cells from oxidation, and that this effect involves the inhibition of CCL2 synthesis. Studies from our research group have shown that PON1 deficient mice fed an atherogenic diet had increased hepatic fat depots and a marked depression of the tricarboxylic acid (TCA) cycle. In addition, the hepatic concentrations of several markers of oxidative stress and CCL2 expression were increased [22]. Further experimental data [23] showed that dietary fat caused liver steatosis, oxidative stress, and the accumulation of pro-inflammatory macrophages in the livers of LDL-receptor and PON1 double deficient mice, together with alterations in energy metabolism, in the methionine cycle, in the glutathione reduction pathway, and autophagy. Conversely, when we established a line of LDL-receptor, PON1, and CCL2 triple deficient mice, we observed that the deletion of this chemokine normalized the metabolic disturbances and increased lysosome-associated membrane protein 2 expression, which suggests enhanced chaperone-mediated autophagy. In humans, studies have observed that individuals with obesity have impaired PON1 activity and impaired mitochondrial function [24][25]. Our group has a special interest in evaluating the hepatic alterations in patients with morbid obesity treated with bariatric surgery and, as well, in observing the metabolic effects of the treatment. To date, results have shown that one-year post-surgery, the hepatic histology of all patients was improved, especially in those who had severe steatohepatitis, bridging fibrosis, and/or cirrhosis. Additionally, we observed pre-surgery differences in plasma and liver markers of oxidative stress and inflammation (including CCL2 and PON1), which were corrected one-year post-surgery [26]. In addition, patients with steatohepatitis presented pre-surgery alterations in energy metabolism, especially in plasma concentrations of α-ketoglutarate and oxaloacetate, which reverted one-year post-surgery [27]. Overall, these results suggest an entanglement of PON1 and CCL2 in the regulation of metabolism and mitochondrial function in the liver of experimental animals, and in humans (Figure 1). 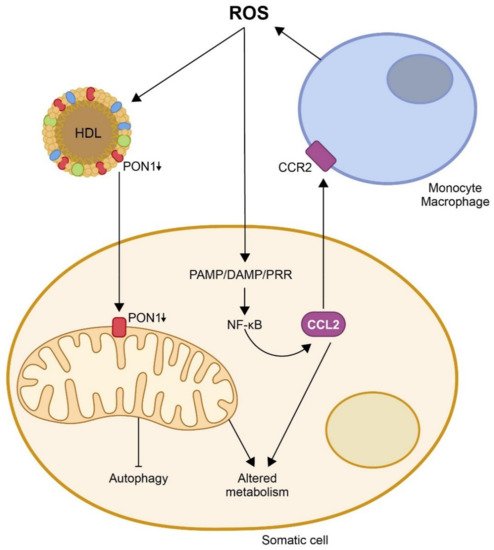 Figure 1. Oxidation, inflammation, and disturbances in energy metabolism are closely related. To date, the evidence reported suggests that excessive production of reactive oxygen species (ROS) would inhibit paraoxonase-1 (PON1) activity in high-density lipoprotein (HDL) particles and in the mitochondrial membranes of somatic cells. At the same time, it would stimulate the synthesis of chemokine (C-C motif) ligand 2 (CCL2) through several pathways, notably that of pathogen-associated molecular patterns/damage-associated molecular patterns/pattern-recognition receptors (PAMP/DAMP/PRR). The decrease in PON1 activity and the increase in CCl2 would cause alterations in mitochondrial metabolism and an inhibition of autophagy. At the same time, CCL2 would interact with its receptor (CRR2) and present on monocytes, promoting their migration to sites of injury, their differentiation to macrophages, and their synthesis of new ROS, producing a vicious circle that would trigger and aggravate the disease.

3. Mechanism of Action of CCL2 in the Immune Response and Inflammation and Its Relationship with Multiple Metabolic Alterations

One of the proposed mechanisms by which oxidative stress would enhance the inflammatory response is the induction and assembly of multiprotein complexes called inflammasomes. ROS activate the NOD-like receptor Pyrin domain 3 (NLRP3) in macrophages, triggering the formation of inflammasomes and an immune reaction that involves the synthesis of pro-inflammatory chemokines, from which CCL2 is, probably, the most representative [28][29][30][31]. This chemokine is upregulated following tissue injury and is expressed by both inflammatory and stromal cells. CCL2 has been reported to promote endoplasmic reticulum (ER) stress and autophagy and to regulate NF-ĸB expression by catalyzing de-ubiquitination [32]. The main pathway triggering inflammation is, probably, the activation of pattern-recognition receptors (PRRs), which recognize pathogen-associated molecular patterns (PAMPs), synthesized as a response to pathogens, or damage-associated molecular patterns (DAMPs), which are products of damaged cells [33][34][35]. The binding of PAMP/DAMP to a PRR leads to NF-ĸB activation and the production of adhesion molecules and chemokines that lead to infiltration of immune cells into the sites of tissue damage [36]. Other alternative pathways also result in similar outcomes, particularly the phosphoinositide 3-kinase-related signaling pathway, the mitogen-activated protein kinase pathway, and the Janus kinase/signal transducers and activators of transcription signaling pathway [37][38][39]. These changes induce the UPR, essentially by three ER-related transmembrane proteins, i.e., the inositol-requiring enzyme 1, the protein kinase RNA-like endoplasmic reticulum kinase, and the activating transcription factor 6 [40][41][42][43]. CCL2 and other chemokines, together with oxidative stress, trigger ER stress. In addition, the UPR may regulate inflammation through several pathways, such as the regulation of oxidative stress or the upregulation of CCR2 expression [44]; the UPR links ER stress with cell death and autophagy [45]. When cell damage is moderate, autophagy helps cells survive the injury, allowing them to heal and thus preventing cell death by removing toxic protein aggregates. However, when cell damage is high, the result is a non-apoptotic form of cell death that can be detrimental. The role of autophagy in the maintenance of mitochondrial integrity seems to be paramount [46]. Mitophagy increases cell lifespan, while repression of autophagy reduces lifespan. Several studies have linked mitochondrial dysfunction, autophagy, and age-related diseases with the activity of the inflammasomes [47][48][49][50]. Taken together, these results define a clear relationship between oxidative stress, chemokines, and mitochondrial impairment, resulting in metabolic alterations and their involvement in diseases.
Activation of the immune response and chronic inflammation has been associated with aging and age-related diseases [51][52][53]. Senescent cells secrete chemokines, which influence the trafficking of immune cells [54][55]. Epidemiological studies have suggested that CCL2 levels are increased in older individuals, independently of metabolic alterations. Moreover, in vitro studies have shown that chemokines appear to confer senescence to neighboring normal cells in an autocrine and paracrine fashion [56][57][58]. A recent study by our research group in mice with accelerated aging is a good example of such relationships [59]. We crossbred mice that overexpressed CCL2 with progeroid mice bearing a mutation in the lamin A gene. Wild-type animals and progeroid mice not overexpressing CCL2 were used as controls. We observed that progeroid mice lost weight (relative to the wild-type animals) and developed lordokyphosis and lipodystrophy. The lifespan was significantly reduced in both strains of progeroid mice, but this reduction was higher in those overexpressing CCL2. These mice also presented specific characteristics of metabolic dysregulation in skeletal muscle, including alterations in the glucose and TCA cycles, and in one-carbon metabolism. These data suggest that mitochondrial metabolites play major roles in pathological aging. Consequently, we investigated the mitochondrial respiratory complexes in skeletal muscle, and observed that the expressions of complexes I and V were lower in mice overexpressing CCL2. In addition, the protein concentrations of translocase of outer membrane 20 (TOM20) and mitofusin 2 (MFN2) in the muscles of the progeroid mice were decreased, indicating alterations in the correct formation of the mitochondrial network. We also observed an increase in p53, which would indicate the triggering of aging through a p53-mediated transcriptional program involving the mechanistic target of rapamycin. Indeed, we found inhibition of phosphorylation of phosphoinositide 3-kinase, indicating a mechanistic target of rapamycin inhibition. Finally, the higher microtubule-associated proteins 1A/1B light chain 3B (LC3) II/I ratio, and lower lysosome-associated membrane protein 2 (LAMP2A) and sequestosome 1 (p62) expressions suggested the involvement of chaperone-mediated autophagy as a consequence of the CCL2 overexpression in the progeroid animals.
Following on from the actions described above, in many infectious and non-infectious diseases, the adaptive immunity deteriorates, whereas the innate immunity is more responsive to stimuli; the consequence is the development of an inflammatory reaction. Several studies have linked the activation of NLRP3, which is dependent on increased generation of free radical species by mitochondria, with metabolic disturbances [60][61][62]. Hence, it is of note that awareness of the origin of free radicals and the putative mechanisms of prevention (i.e., PON1) is critical when establishing possible therapeutic interventions in order to preempt an inflammatory reaction. Within this context, the interaction of PON1 with CCL2 can play a key role.

More
© Text is available under the terms and conditions of the Creative Commons Attribution (CC BY) license (http://creativecommons.org/licenses/by/4.0/)
Upload a video for this entry
Information
Subjects: Allergy
Contributor MDPI registered users' name will be linked to their SciProfiles pages. To register with us, please refer to https://encyclopedia.pub/register :
Jordi Camps
View Times: 42
Revisions: 2 times (View History)
Update Time: 09 Jul 2021
Table of Contents
1000/1000
Hot Most Recent