Submitted Successfully!
Thank you for your contribution! You can also upload a video entry related to this topic through the link below:
https://encyclopedia.pub/user/video_add?id=11851
Check Note
2000/2000
Near-Surface Wind
Edit
Upload a video
This entry is adapted from 10.3390/atmos12060766

Near-surface wind is one of the most important meteorological parameters. It is a major factor in various industries of economic importance, such as agriculture, fishery, transportation, construction, and water conservancy engineering. Hainan Province is located at the southernmost tip of China, and it includes Hainan Island and more than two million square kilometers of the South China Sea. Owing to these geographical features, wind disasters occur frequently in Hainan Province, so near-surface wind data are particularly important for Hainan. Although the site observations are accurate, simple site observations cannot meet data needs in areas with sparse sites, such as complex topographic areas and large sea areas [1][2][3][4]. With the improvement of numerical models and model interpretation techniques and the diversified requirements of meteorological service requirements, refined grid forecasts have gradually replaced traditional site forecasts. Grid live analysis products are the basis of refined grid forecasts [5][6], and they have been widely used in meteorological disaster monitoring, transportation, tourism, agriculture, and other refined meteorological services that are closely related to people’s livelihood [7][8][9][10]. Comprehensive evaluation needs to be used to judge whether the live analysis products can reflect the actual state of the atmosphere and if they can be used in weather forecasting and meteorological services [11]. Near-surface wind products are an important part of live analysis products [12][13][14]. Reliable near-surface wind products have an important role in the monitoring, prediction, and study of wind disasters. The evaluation of near-surface wind products can provide the direction for improving the data quality for Hainan, provide basic support for fine-grid forecasting and meteorological services, and help to reduce the losses that are caused by wind disasters.
Data fusion products have been developed in several countries, including the Fifth Generation Global Atmospheric reanalysis data (ERA5) developed by the European Center for medium range weather forecasting (ECMWF), the Interim ECMWF Re-Analysis product (ERA-Interim), the Japanese 55-year Reanalysis (JRA55), the Modern Era Retrospective Analysis for Research and Applications-2 (MERRA2), the National Centers for Environmental Prediction (NCEP)/National Center for Atmospheric Research (NCAR), and so on [15][16][17]. Many studies have evaluated these data products. Previous studies have shown that the ERA5 surface wind data show the best agreement with in situ observations when compared with ERA-Interim, JRA55, MERRA2, and NCEP/NCAR Reanalysis 1 (R1) [11]. ERA5 has the best performance in terms of the monthly average wind speed magnitude and the interannual variability of near-surface wind speed since 1979 in the Antarctic region [18]. When compared with ERA-Interim, ERA5 is more consistent with observations in terms of average wind speed and gust measurements in Sweden, but there are still significant differences in inland and mountainous areas [19]. ERA5 performs better than ERA-Interim in terms of instantaneous root-mean-square wind speed agreement, mean, and transient wind errors when compared with the ASCAT ocean vector wind observations [20]. There are also studies that have evaluated the applicability of data fusion products in China [21]. ERA-Interim, JRA55, MERRA, and NCEP-2 can reproduce the spatial distribution of the near-surface wind speed and the climatology, but they underestimate the intensity of the near-surface wind speed in most parts of China [22]. Among the surface elements of ERA5, the sea-level pressure and air temperature have the best reproducibility, followed by the relative humidity and wind speed, although the wind speed deviates greatly over coastal areas, and the wind direction has the worst reproducibility [23].
In China, the National Meteorological Information Center (NMIC) developed the High-Resolution China Meteorological Administration (CMA) Land Data Assimilation System (HRCLDAS) [24][25]. It can generate high-resolution grid data products of 0.01° × 0.01° in real time. HRCLDAS data products were released in 2020. Because of its short research and development time, there is still a lack of research evaluating its quality, and the understanding of its accuracy and authenticity in the special geographical environment of Hainan Island and the South China Sea is limited. Therefore, there is an urgent need for a comprehensive inspection and evaluation. To more accurately judge the quality of HRCLDAS products, they need to be compared with data fusion products that are widely recognized and used around the world. 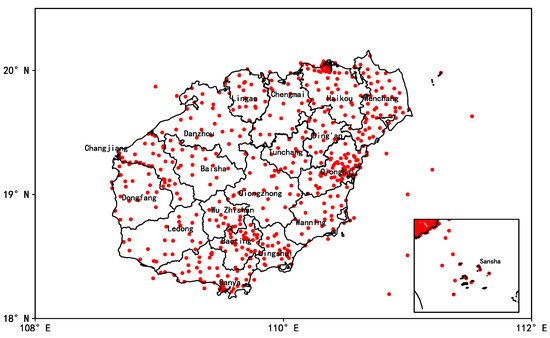 The ERA5 reanalysis data are the latest generation of reanalysis data that were developed by the ECMWF. ERA5 is substantially upgraded and improved when compared with its predecessor ERA-Interim [20][26][27], and it is currently open access. The latitude and longitude grid resolution of the ERA5 reanalysis data is 0.25° × 0.25°, and the time resolution is 1 h. The data are downloaded from the C3S Climate Data Storage (CDS) through ECMWF Web API using Python scripts (Table 2).
Table 2. Information on ERA5 and HRCLDAS data.

HRCLDAS is a high-resolution land surface data assimilation system that was developed by the National Meteorological Information Center of the CMA. The system uses multiple grid variational technology [28] and a terrain correction algorithm, combined with numerical prediction data, satellite data, and site observation data, to generate atmospheric-data-driven products [24]. The latitude and longitude grid resolution of the HRCLDAS data (Table 2) is 0.01° × 0.01°, and the time resolution is 1 h. The data were obtained from the CMA Data Service Centre. 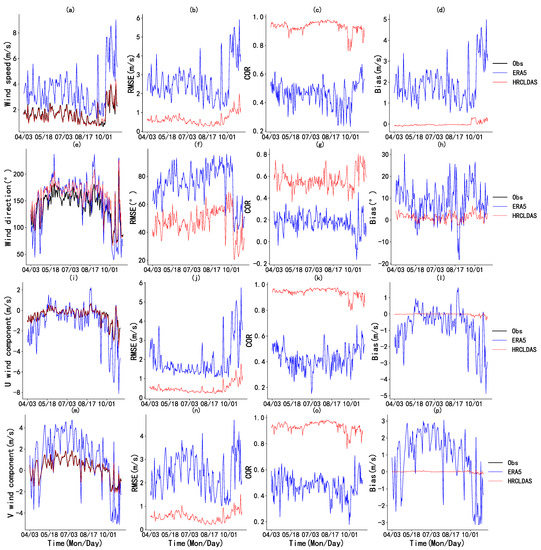 6.  Comparative Analysis of Land and Sea 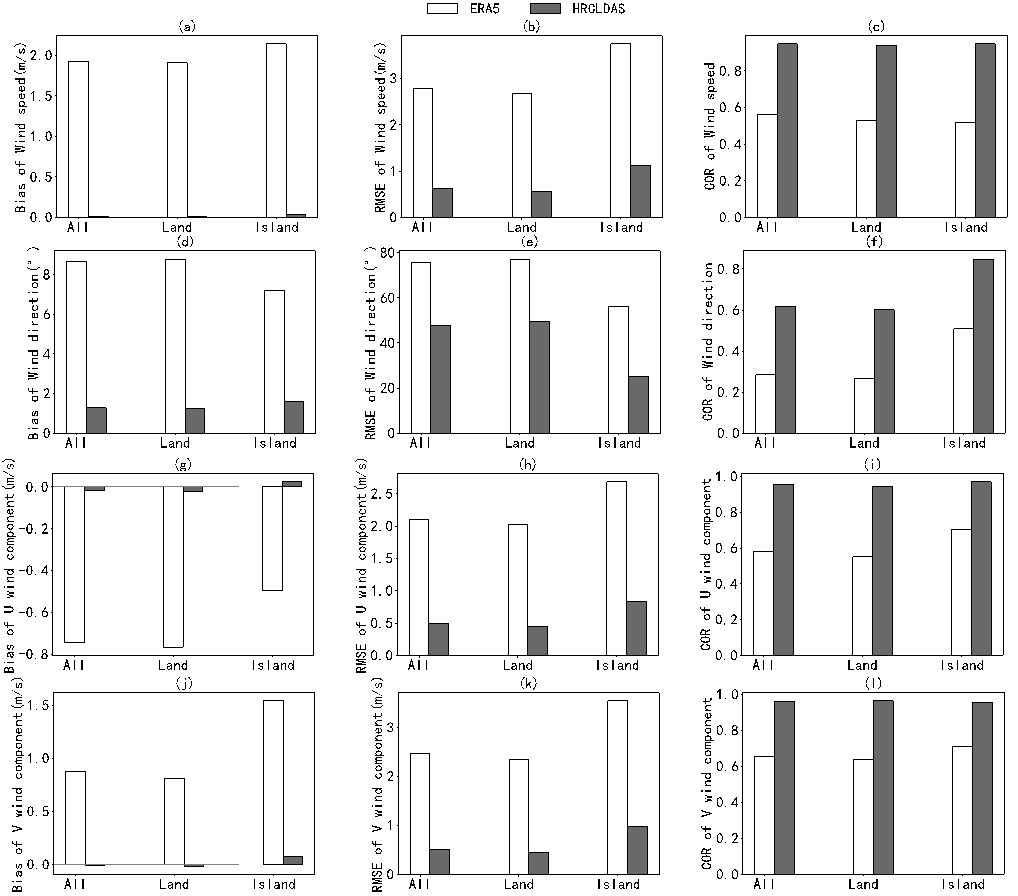 In general, HRCLDAS wind products had a smaller bias, smaller RMSE, and larger COR for both land and sea islands when compared with ERA5. The quality of the HRCLDAS and ERA5 wind products for islands was slightly better than that for land.

More
© Text is available under the terms and conditions of the Creative Commons Attribution (CC BY) license (http://creativecommons.org/licenses/by/4.0/)
Upload a video for this entry
Information
Subjects: Meteorology & Atmospheric Sciences
Contributor MDPI registered users' name will be linked to their SciProfiles pages. To register with us, please refer to https://encyclopedia.pub/register :
Yi Jiang
View Times: 66
Revision: 1 times (View History)
Update Time: 09 Jul 2021
Table of Contents
1000/1000
Hot Most Recent