Submitted Successfully!
Thank you for your contribution! You can also upload a video entry related to this topic through the link below:
https://encyclopedia.pub/user/video_add?id=11822
Check Note
2000/2000
Microspheres Used in Liver Radioembolization
Edit
Upload a video
This entry is adapted from 10.3390/molecules26133966

Inert microspheres, labeled with several radionuclides, have been developed during the last two decades for the intra-arterial treatment of liver tumors, generally called Selective Intrahepatic radiotherapy (SIRT). The aim is to embolize microspheres into the hepatic capillaries, accessible through the hepatic artery, to deliver high levels of local radiation to primary (such as hepatocarcinoma, HCC) or secondary (metastases from several primary cancers, e.g., colorectal, melanoma, neuro-endocrine tumors) liver tumors. Several types of microspheres were designed as medical devices, using different vehicles (glass, resin, poly-lactic acid) and labeled with different radionuclides, 90Y and 166Ho.

Liver radioembolization (RE) is commonly used for the treatment of hepatocellular carcinoma and secondary liver malignancies. This treatment is performed by injection of radioactive microspheres in the liver artery after transarterial catheterization. Radioactive microspheres are trapped in the microvasculature (arterioles) of tumors and of the liver parenchyma. Unlike the liver parenchyma, where blood supply is almost obtained by the portal vein, liver tumors are preferentially vascularized by the liver arteries. This preferential perfusion allows us to achieve good targeting of hypervascularized tumors with a limited radiation of the non-tumoral liver [1]. The technique was initially developed using iodine-131 (131I) Lipiodol, a radiolabeled ethiodized oil [2]. Thereafter, radiolabeled microspheres have emerged using Yttrium-90 (90Y) and holmium-166 (166Ho). These radionuclides emit beta radiations of high energy, resulting in a high delivery of energy to the tumors (absorbed doses) in the range of 100 to 1000 Gy [3]. In comparison, the total tumor dose is limited to a maximum of 70 Gy in external beam radiotherapy to avoid liver damage [4].

SIR-Spheres® are cation exchange resin microspheres labeled with 90Y phosphate. The resin is supplied as symmetrical microspheres ranging from 30 to 50 µm in diameter, made of sulphuric acid groups attached to a styrene divinylbenzene copolymer resin (Aminex 50W-X4, Bio-Rad, Hercules, CA, USA). First, stable yttrium oxide (III) (89Y) is activated in a neutron beam to its radioisotope 90Y according to the nuclear reaction 89Y (n,γ) 90Y. The radioactive yttria (Y2O3) is then dissolved in sulphuric acid. 90Y is adsorbed onto the resin matrix by adding newly formed 90Y sulphate solution to the aqueous slurry of microspheres. To immobilize and stably incorporate the 90Y into the lattice, the radionuclide is precipitated as an insoluble phosphate salt by adding a tri-sodium phosphate solution. Finally, the microspheres are washed with a phosphate buffer solution and resuspended with water for injection [6].

The second commercially available product labeled with 90Y is TheraSphere®. It consists of radioactive yttrium oxide-aluminosilicate glass microspheres. Inactive yttria is mixed with aluminum and silicone oxide. The resulting mixture is melted and stirred in a furnace at 1500 °C. The melt is then removed from the heat and rapidly quenched to a glass. The resultant glass frit is crushed to fine powder and filtered through a sieve. The powder is spheroidized by introducing it into a flame: the particles are melted and formed into spherical liquid drops by surface tension. The newly formed microspheres are quickly cooled and screened. The 20- to 30-µm fraction is rinsed and dried. The 89Y embedded glass microspheres are eventually activated by neutron bombardment to the radioisotope 90Y [7][8][9].
QuiremSpheres® are poly-L-lactic acid (PLLA) microspheres labeled with 166Ho. The microspheres are synthesized by the solvent-evaporation technique. First, non-radioactive 165Ho is complexed with acetylacetonate. Complex 165Ho-acetylacetonate is then incorporated into the PLLA matrix by adding 165Ho-actylacetonate and poly-L-lactic acid to a continuously stirred chloroform solution. The resulting solution is then added to an aqueous polyvinyl alcohol solution and stirred until complete evaporation of the chloroform. The newly formed 165Ho-loaded microspheres are collected by centrifugation, washed and fractionated according to their size. The 20- to 50-μm fraction is dried and packed in polyethylene vials. Finally, 165Ho is activated to 166Ho in a nuclear reactor by neutron irradiation with a thermal neutron flux of 5 × 1012 cm−2 s−1 (165Ho + n→166Ho, cross section 64 barn) [10][11][12]. The final product contains 19% (w/w) holmium (essentially stable which is of interest in view of the paramagnetic properties of 165Ho, see paragraph 2) and a maximum 166Ho specific activity per microsphere of 450 Bq [13]. QuiremSpheres® is supplied as a ready-to-use, tailored dose: the dispatched activity is patient-specific and matches the activity at treatment time as ordered by the customer. There is no need for patient-dose preparation on-site [14].

Table 1. Physical characteristics of radionuclides.
These beta particles generate free radical species in the presence of oxygen inducing DNA breaks and cell killing. Many factors influence the killing efficacy, and particularly the rate of beta particles emission (correlated to half-life) and the number of beta particles (correlated to the radioactive activity) [15]. The biological effect of radiations is demonstrated by the absorbed dose (Gy), defined by the energy (J) deposited per mass of tissue or tumor (kg). This absorbed dose is directly correlated to the cell survival fraction and tumor response [16].
The precise localization of these beta particles in the tumor is also an important factor for tumor response. Indeed, the very short range of beta emission (few millimeters) induce a biologic effect only in the neighborhood of the beta particles and consequently, their distribution in the tumor must be the as homogeneous as possible for killing a maximum of cells and induce a tumor response [17].
These radionuclides have also the ability to be detected by nuclear imaging systems. An accurate detection is important for evaluating the distribution in the targeted tissues and for a quantitative assessment of the dose deposition. Beta particles induce interactions with the surrounding tissues and generate a continuous spectrum of X-ray photons known as bremsstrahlung.

90Y-resin, 90Y-glass and 166Ho-poly-L-lactic-acid [PLLA] microspheres differ from their physical characteristics, summarized in Table 2 [7][18]. Globally, all three devices have a similar diameter around 30 μm, but some differences appear in the size spectrum distribution (Figure 1). MAA particles have a significantly lower size (mean: 15 μm). 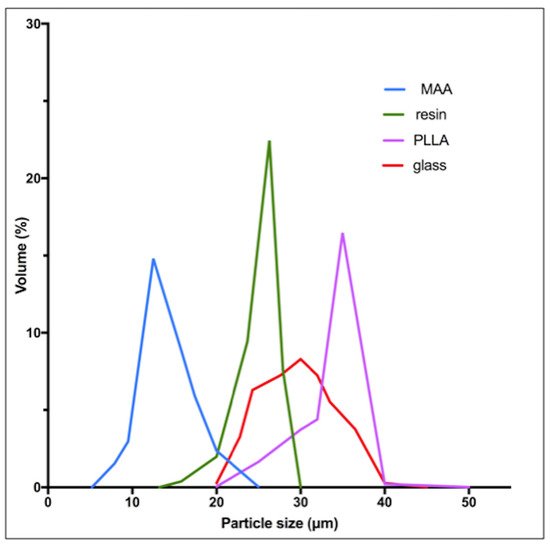 5. Impact at a Microscopic Level-Microdosimetry

Due to their physical differences, these types of microspheres have a different distribution into the liver at the microscopic level, which results in major differences in local absorbed doses.

90Y-resin, 90Y-glass and 166Ho-PLLA microspheres have a similar diameter permitting us to similarly reach the microvasculature of tumors. The higher density of glass microspheres (Table 2) does not have a significant impact in the microsphere distribution compared to resin microspheres, as demonstrated by an experimental model of the hepatic vasculature [24].

The main differences between microspheres are the specific activity per sphere and the number of injected microspheres during a treatment. Glass microspheres are especially highly radioactive (2500 Bq) and in limited number compared to others. 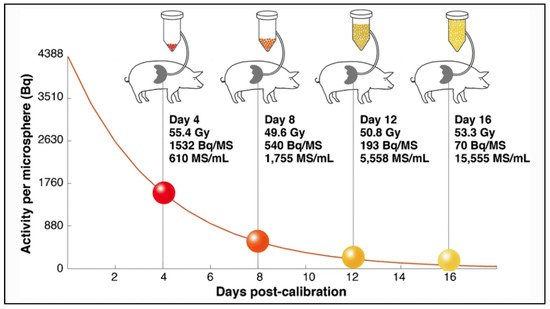 Figure 2. Amount of glass microspheres injected in pig livers as a function of time from microsphere calibration (4, 8, 12 or 16 days), resulting in spheres of different specific activity and concentrations. Reprinted from European journal of nuclear medicine and molecular imaging with permission of Springer Nature (Eur. J. Nucl. Med. Mol. Imaging 2020, 47, 816–827).
The analysis of the microdosimetry data demonstrated important differences in absorbed doses deposition at a microscopic level. Each pig received the same average dose of 50 Gy, but the distribution at a microscopic level was clearly different, being very inhomogeneous when the number of microspheres was lower. The percentage of the non-target liver receiving at least a potentially toxic dose of 40 Gy was only 24% for microspheres in relatively small number (e.g., 610 microspheres/mL of tissue) and 53% using more numerous microspheres (e.g., 15,555 microspheres/mL of tissue). This effect is well illustrated in Figure 3.

Figure 3. Artistic rendering of microscopic microsphere deposition at day 4 post-calibration (a), 8 post-calibration (b) and 12 post-calibration (c). Increased homogeneity of absorbed dose is apparent for glass microspheres injected at day 12 post-calibration (e.g., 193 Bq/microsphere, 5558 microspheres/mL). The proportion of the liver receiving a dose higher or equal to 40 Gy (red and yellow colors) was higher for glass microspheres injected at day 12 post-calibration (c). Reprinted from European journal of nuclear medicine and molecular imaging with permission of Springer Nature (Eur. J. Nucl. Med. Mol. Imaging 2020, 47, 816–827).
Using microspheres in limited number induces a more heterogeneous liver distribution, but also permits it to be less toxic, avoiding reaching a toxic dose in a large part of the normal liver. These dosimetric concepts could be extrapolated to any type of microspheres, in order to evaluate to what extent the number of microspheres and their specific activity can influence the efficacy and toxicity of liver radioembolization.
90Y- resin and166Ho- PLLA microspheres could have an embolic effect because a high number of particles are injected in the liver arterial tree (Table 2). However, this effect may be very limited in particular because they have a very small size, permitting to reach the terminal microvasculature [26].

6. Impact at a Macroscopic Level-Clinical Effects

Physical characteristics of the radioactive microspheres explain also their different toxicity and efficacy profiles. Regarding PLLA microspheres (Quirem Spheres®), more data are needed to evaluate and compare its efficiency and toxicity.

Regarding toxicity, an excessive irradiation of the healthy liver can induce a severe and potentially life-threatening complication: radioembolization induced liver disease (REILD) with an incidence rate inferior to 4% [26]. It is described by a sinusoidal obstruction syndrome and by a liver damage within 3 months after RE, in absence of tumor progression [27]. This complication tends to occur especially when a large volume of liver parenchyma is exposed to radiations. Other risk factors include a recent exposition to chemotherapy and underlying cirrhosis [28]. In external beam radiotherapy (EBRT), this complication occurs with whole liver doses of 30–35 Gy [29]. The tolerance is higher in RE, 40–50 Gy for resin microspheres and 90 Gy with glass microspheres [30][31][32]. A pre-clinical study in pigs with administration of PLLA microspheres demonstrates no toxicity with absorbed doses over 100 Gy. In human studies in phase 1 and 2, the whole liver absorbed dose was limited to 60 Gy and was not associated with any liver toxicity [33][34]. The homogeneity of the dose distribution explains the relative lower liver dose tolerability of external radiotherapy. To the contrary, a large heterogeneity of the dose distribution appears in RE, and a relative less proportion of liver parenchyma receives a toxic dose (i.e., 30–35 Gy). As described by Pasciak et al. [25], this liver dose heterogeneity is directly correlated to the number of microspheres injected in the liver. This characteristic could explain why the tolerable dose is significantly higher when a relatively small number of radioactive microspheres are injected into the liver (Table 2).

The 90Y beta range being sub-centimetric, the result is that, contrary to EBRT, the absorbed dose itself is highly heterogeneous. As a consequence, for an absorbed dose of 40 Gy, a sufficient fraction of lobules experienced sub-lethal dose in TARE and can repopulate the liver pool. Estimation of this fraction by Monte Carlo simulations explains the difference between the maximal safe absorbed dose between glass and resin spheres radioembolization, as well as EBRT [35]. 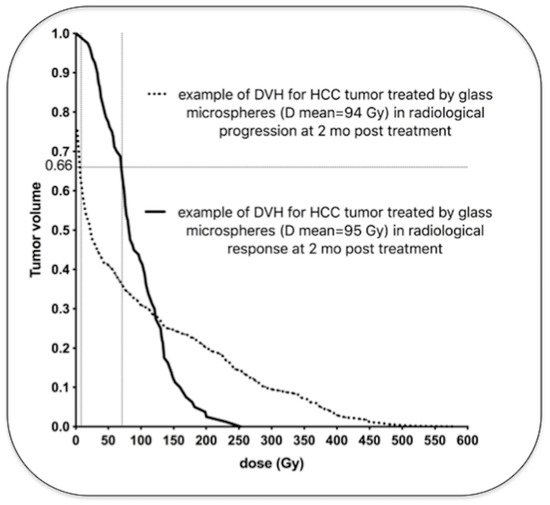 More
© Text is available under the terms and conditions of the Creative Commons Attribution (CC BY) license (http://creativecommons.org/licenses/by/4.0/)
Upload a video for this entry
Information
Subjects: Others
Contributor MDPI registered users' name will be linked to their SciProfiles pages. To register with us, please refer to https://encyclopedia.pub/register :
Philippe D'ABADIE
View Times: 83
Revisions: 2 times (View History)
Update Time: 29 Mar 2022
Table of Contents
1000/1000
Hot Most Recent