Submitted Successfully!
Thank you for your contribution! You can also upload a video entry related to this topic through the link below:
https://encyclopedia.pub/user/video_add?id=11812
Check Note
2000/2000
Primary Membranous Glomerulonephritis
Edit
Upload a video
This entry is adapted from 10.3390/biomedicines7040086

The detection of phospholipase A2 receptor (PLA2R) and thrombospondin domain containing 7A THSD7A among primary membranous glomerulonephritis (MGN) patients transformed the diagnosis, treatment monitoring, and prognosis. Anti-PLA2R can be detected in 70–90% of primary MGN patients while anti-THSD7A in 2–3% of anti-PLA2R negative primary MGN patients depending on the technique used. Serum and urine samples are less invasive and non-invasive, respectively, and thus can detect the presence of anti-PLA2R and anti-THSD7A with higher sensitivity and specificity, which is significant in patient monitoring and prognosis. It is better than exposing patients to a frequent biopsy, which is an invasive procedure. Different techniques of detection of PLA2R and THSD7A in patients’ urine and sera were reviewed to provide newer and alternative techniques. We proposed the use of biomarkers (PLA2R and THSD7A) in the diagnosis, treatment decision, and follow-up of patients with primary MGN.

Membranous glomerulonephritis (MGN) is characterized by the deposit of the immune complex at the subepithelial region of the glomerular membrane and the formation of perpendicular projection similar to the glomerular basement membrane (GBM) found between podocyte cytoplasm and GBM [1]. The histological characteristics of MGN include GBM thickening, staining of the C3 complement along the periphery of glomerular capillaries, granular staining for immunoglobulin G subtype, and deposition of the immune complex at the subepithelium found exclusively in primary MGN [2].
Studies have shown that MGN is the most common cause of nephrotic syndrome among adults, consisting of up to 20% of cases among Hispanic and African Americans. Whites are the most affected, followed by Asians, Africans, and Hispanics [3][4]. MGN accounts for 1.5–9% of the nephrotic syndrome among children and 21–35% in adults. The disease is predominantly seen among adults aged 40–50 years, with a male to female ratio of (2:1)–(3:1) [5].
Idiopathic or primary MGN is the commonest type seen in about 75% of the patients with MGN while the remaining 25% manifest as a secondary disease to other conditions, mainly infection [6][7][8][9].
It is very difficult to differentiate between primary and secondary MGN based on their clinical presentations and laboratory evaluations. Therefore, good leading history, clinical, and laboratory findings (including renal biopsy) are crucial in differentiating the two types of MGN [10]. Diagnosis of MGN is traditionally made through electron microscopy, light microscopy, and immunofluorescence techniques from renal biopsy [11].
There are a lot of attempts to use less invasive methods, like serum samples, or non-invasive methods, like urine samples, to make a diagnosis and monitor MGN patients immediately following the detection of anti-phospholipase A2 receptor (PLA2R) and anti-thrombospondin domain containing 7A (THSD7A) in the serum of primary MGN patients. Despite these tremendous achievements, making a diagnosis using serum alone is still difficult due to the lack of a cut-off point value universally agreed on for diagnosis and follow-up. Moreover, certain forms of secondary diseases are associated with these biomarkers.

Immune complex formation in the subepithelial surface of the glomerular complex membrane is central to the formation of membranous glomerulonephritis [12]. Three major mechanisms have been proposed so far [1][2].
The first hypothesis emphasizes on passive entrapment of preformed immune complex due to higher intraglomerular pressure and negatively charged capillary which force the protein across the glomerular capillary wall. An example is in lupus nephritis [13][14].
The second hypothesis involves the localization of the circulating antigens in the subepithelial aspect of the glomerular basement membrane, as such, the antigen forms in-situ immune complex deposit with the antibodies. This is seen in hepatitis B [15][16], hepatitis C [17][18], Helicobacter pylori [19], and patients diagnosed with MGN [20][21].
The third mechanism focuses on the binding of autoantibodies to antigens, as well as to podocyte membrane, leading to immune complex deposition. Numerous studies were conducted to describe the pathogenesis of MGN, ranging from the Heymann rat model of 1959 where membranous glomerulonephritis was induced using Lewis rats with crude kidney extract [22]. The use of megalin in the 1980s by Kerjaschki and Farquhar showed oxygen radicals responsible for glomerular damage resulting in proteinuria [23]. No anti-megalin antibody was recorded to have been found in patients with MGN. Therefore, megalin cannot be associated with proteinuria in human [12][24].

Neutral endopeptidase (NEP) is the first human biomarker for MGN identified in early 2000s and is seen in patients with alloimmune neonatal MGN. This involves vertical transmission from a mother to her offspring following sensitization during previous pregnancy [25]. Therefore, it is very important to screen families with a history of membranous nephropathy as part of their antenatal care [25][26].
Beck et al. (2009) conducted a breakthrough study where a M-type phospholipase A2 receptor (PLA2R) was detected as a biomarker for MGN using Western blot technique. More recently, another biomarker, thrombospondin domain containing 7A (THSD7A) was discovered to complement PLA2R. This biomarker is detected in seronegative anti-PLA2R primary MGN patients except for some rare conditions where anti-PLA2R and anti-THSD7A can be detected [27][28]. Anti-THSD7A cannot be detected in a normal individual or patients with secondary MGN [29][30].
Anti-THSD7A occur in 2.5–5% of patients with idiopathic MGN and does not appear in secondary MGN. Except for few where both PLA2R and THSD7A were found positive, THSD7A is only detected among those MGN patients who are PLA2R negative [31][32].

Nephrotic range proteinuria is the commonest presentation among MGN patients. It occurs in 70–80% of patients associated with edema, hypoalbuminemia, and hyperlipidemia, while the remaining patients present with subnephrotic range proteinuria [3][4][33][34][35][36]. The renal function may be normal or slightly impaired at diagnosis. An abrupt change in renal functions may call for a prompt investigation to look for possible superimposed conditions like bilateral renal thrombosis, drug toxicity, and crescentic glomerulonephritis [37]. Other features include hematuria; hypertension is mostly not specific to idiopathic membranous nephropathy [38].
A study involved the administration of THSD7A-specific IgG to mice, thereby leading to massive proteinuria and histomorphological changes of MGN. The above findings showed that anti-THSD7A antibodies might interfere with the integrity of podocyte resulting in damage of cells and subsequently proteinuria [39].
Most of the patients presenting with subnephrotic proteinuria are asymptomatic and have a natural history different from those with nephrotic range proteinuria. About 40% will have spontaneous remission, needing just conservative management while the remaining 60% may develop nephrotic range proteinuria within 2 years of presentation, especially when the anti-PLA2R antibody is still present [40][41]. The progression of the disease is four times accelerated, which becomes synonymous to those that presented with nephrotic syndrome ab initio [42]. This is another scenario in which anti-PLA2R measurement may be important [5].

Sarcoidosis is rarely seen in glomerular diseases. However, when it occurs, it is frequently associated with MGN [43][44]. The pathogenesis linking MGN to sarcoidosis remains unclear due to the inability to identify a target antigen or specific antibody linking the two diseases. Notably, while MGN resulted from an autoimmune reaction involving type-2 helper (Th2) cells, sarcoidosis is associated with type-1 helper (Th1) cells [45][46]. Stehle et al. (2015) demonstrated a high prevalence of anti-PLA2R antibodies in the serum of MGN patients with sarcoidosis [44].
In addition to sarcoidosis, PLA2R was detected in 64% hepatitis B virus (HBV) related MGN [47]. This may be due to co-localization of PLA2R and HBsAg in HBV-related MGN due to chronic HBV infection [48][49].

Patients with anti-THSD7A were found to be at risk of reoccurrence after transplant [50]. It has been observed that the messenger RNA for THSD7A was detected in gall bladder carcinoma and not in the normal gall bladder [51]. Serum samples of 1276 patients with MGN were screened for anti-THSD7A. Forty of them tested positive for anti-THSD7A and 8 out of the 40 developed malignancy within an average follow-up period of 3 months. Thus, this finding denoted that THSD7A is associated with malignancy [52]. In another study involving 81 patients with breast cancer and 20 with colorectal cancer, THS7A expression was detected by immunohistochemical stains in 100% and 97.5% of breast cancer and colorectal cancer, respectively [53].

3.4. Role of Biomarkers in Kidney Transplant

The discovery of PLA2R does not only help in differentiating primary and secondary MGN but also helps in pre- and post-kidney transplantation by identifying those at risk of post-transplantation failure for intensive therapy and monitoring [54][55][56]. About 30–50% of primary MGN patients are at risk of reoccurrence following kidney transplant especially among those with very high anti-PLA2R antibodies titer [57][58]. Anti-PLA2R titer should be considered post-transplantation, even though the threshold of anti-PLA2R level determining the reoccurrence is not clear [59] (Figure 1). 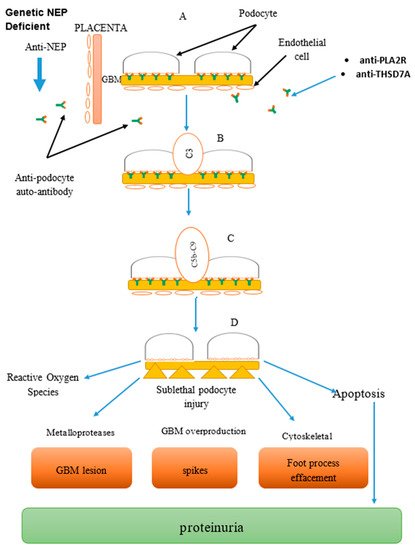 More
© Text is available under the terms and conditions of the Creative Commons Attribution (CC BY) license (http://creativecommons.org/licenses/by/4.0/)
Upload a video for this entry
Information
Subjects: Medicine, General & Internal
Contributor MDPI registered users' name will be linked to their SciProfiles pages. To register with us, please refer to https://encyclopedia.pub/register :
sadiq Maifata
View Times: 51
Revisions: 3 times (View History)
Update Time: 08 Jul 2021
Table of Contents
1000/1000
Hot Most Recent