Submitted Successfully!
Thank you for your contribution! You can also upload a video entry related to this topic through the link below:
https://encyclopedia.pub/user/video_add?id=11803
Check Note
2000/2000
Production of Electrolytic Manganese Dioxide
Edit
Upload a video
This entry is adapted from 10.3390/min11070712

The ferromanganese (FeMn) alloy is produced through the smelting-reduction of manganese ores in submerged arc furnaces. This process generates large amounts of furnace dust that is environmentally problematic for storage. Due to its fineness and high volatile content, this furnace dust cannot be recirculated through the process, either. Conventional MnO2 production requires the pre-reduction of low-grade ores at around 900 °C to convert the manganese oxides present in the ore into their respective acid-soluble forms; however, the furnace dust is a partly reduced by-product. A hydrometallurgical route is proposed to valorize the waste dust for the production of battery-grade MnO2. By using dextrin, a cheap organic reductant, the direct and complete dissolution of the manganese in the furnace dust is possible without any need for high-temperature pre-reduction. The leachate is then purified through pH adjustment followed by direct electrowinning for electrolytic manganese dioxide (EMD) production. An overall manganese recovery rate of >90% is achieved.

Manganese dioxide (MnO2) occurs in nature as the mineral pyrolusite, which is about 62–63% manganese. The most important use of MnO2 is in primary Leclanché (carbon–zinc) and alkaline batteries. This material is used in obtaining the spinel structure of the cathode materials to be used in rechargeable Li-ion batteries (e.g., LiMn2O4) [1][2][3]. MnO2 needed for the production of batteries must have high purity and high electrochemical activity. Among its several allotropic forms, electrochemical activity is the highest for γ-MnO2. Hence, it is the best material for battery applications [4].
Furnace dust is a problematic by-product of the ferromanganese (FeMn) and silicomanganese (SiMn) industries. Its storage is a long-term environmental concern, as it requires efficient technologies for its recycling [5]. The furnace dust contains high concentrations of manganese oxides, with up to 40% or more concentrate [6]. The recycling of the dust back into the ferroalloy furnaces would not only reduce that environmental liability but also decrease the fresh ore consumption. Unfortunately, this is not possible due to the high volatile content of furnace dust, along with its fineness. Many manganese ores contain substantial amounts of potassium (up to 2–3%). Much of this volatilizes and reports to the fume during the smelting operation [6]. The concern regarding the recycling of the fume is that volatile transition metals, such as zinc, can build up due to repeated recycling. One of Elkem’s submerged arc furnaces producing high carbon FeMn alloy had a severe eruption on December 9, 1992, due to an accumulation of volatiles which caused unstable structure formations in the furnace [7].
There is limited literature on the topic of recycling FeMn or SiMn furnace fines for manganese recovery, particularly through hydrometallurgical treatments. Nkosi et al. (2011) obtained a 49% Mn recovery rate from SiMn submerged arc furnace dust through direct atmospheric leaching using a diluted sulfuric acid solution [8]. de Arujo et al. (2006) studied the replacement of rhodochrosite ore by ferromanganese fines for the production of EMD [5]. The fines were directly digested in high concentrations of sulfuric acid, and the resultant solution was purified through pH adjustment first using NH3 (for iron removal) and then using a Na2S addition (for heavy metal removal). However, the study is mostly focused on the electrodeposition behavior of the purified digestion solution, with very little insight into the previous steps. Shen et al. (2007) and Hamano et al. (2008) proposed recycling routes for different dust samples generated by FeMn and SiMn production [9][10]. However, both studies only focus on the recovery of zinc that constitutes ≤1.5% of the dust. In this study, an alternative hydrometallurgical process is proposed for the utilization of FeMn furnace dust in the production of high purity electrolytic manganese dioxide (EMD). An experimental comparison is made between direct reductive leaching of the fines, using a novel, cheap, and green organic, and direct acid leaching.

In the first part of the experiments, leaching was conducted without a reductant, at different leaching temperatures and acid concentrations, for a 1 h duration. The obtained results are provided in Figure 1a. The Mn dissolution rate increases to about 50% when the acid concentration is increased to 12%; however, it becomes stagnant thereafter, with a <10% increase at the highest acid concentration studied (20%). Meanwhile, manganese dissolution slightly increases with an increase in the leaching temperature. This may be due to the faster reaction of Mn with acid. 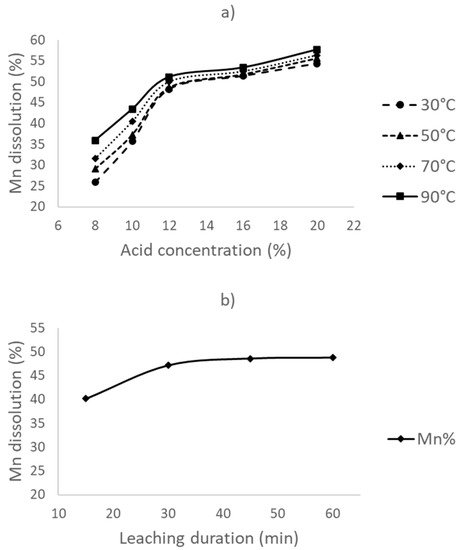 Through direct acid leaching experiments, it was found that maximum recovery of the manganese is less than 60% without any addition of a reductant. This is most likely due to the involvement of MnO2, which can only be effectively dissolved in sulfuric acid in a reducing atmosphere. In the second part of the leaching experiments, dextrin was added as the reductant. 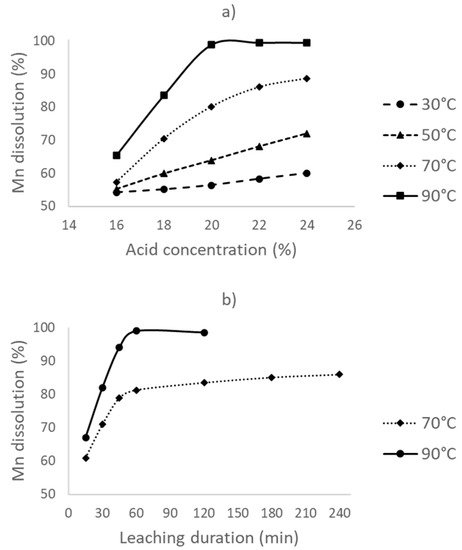 After almost complete leaching of manganese from the furnace dust, the manganese sulfate-rich solution can be used in the production of different end products. In this study, the leachate was used in the production of electrolytic manganese dioxide (EMD). However, further studies can investigate the use of furnace dust for chemical manganese dioxide (CMD) or manganese sulfate production. The latter is, for example, an important source for the secondary battery industry.
The EMD powder produced at 1 amp/dm2 current density is shown in Figure 3a. In Figure 3b, the BSE image of the sample shows a rather smooth surface, with some cracks in the sample that developed during the mechanical removal of the deposit from the anode. The XRD pattern of the EMD powder is provided in Figure 4. It shows only the peaks of gamma-MnO2, which is suitable for battery applications. However, the bulk density measurement of the EMD powder is necessary in order to fully confirm this statement. In agreement with these results, the chemical analysis of the powder showed that all of the impurities were less than 0.1 wt.%. 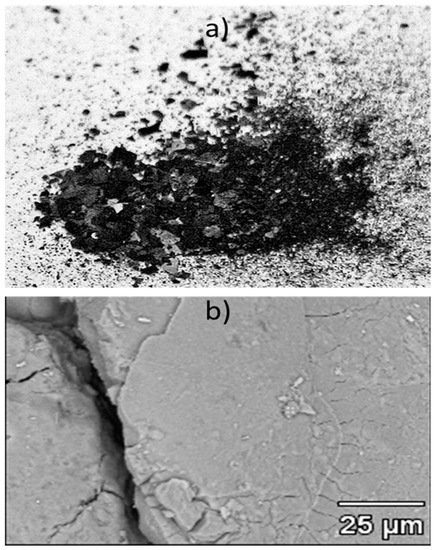 Figure 3. (a) An image of the electrolytic MnO2 (EMD) powder produced in this study, and (b) the powder surface under BSE. 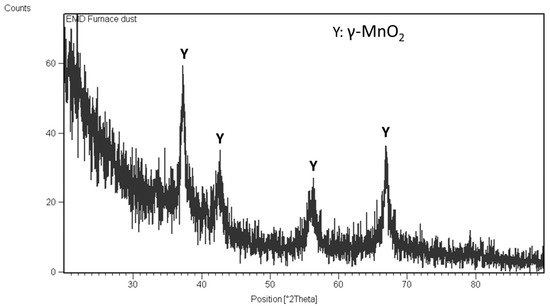 Figure 4. XRD result of the EMD produced.
The energy required for the production of EMD powder was found to be in the range of 1.4–2.0 kWh/kg of MnO2 produced. The overall flow sheet of the process is provided in Figure 5 with a partial mass balance. Based on 100 g of furnace dust input with 42.7% Mn, about 61 g of electrolytic MnO2 can be produced, which corresponds to an overall Mn recovery rate of 90.3% from the dust sample. 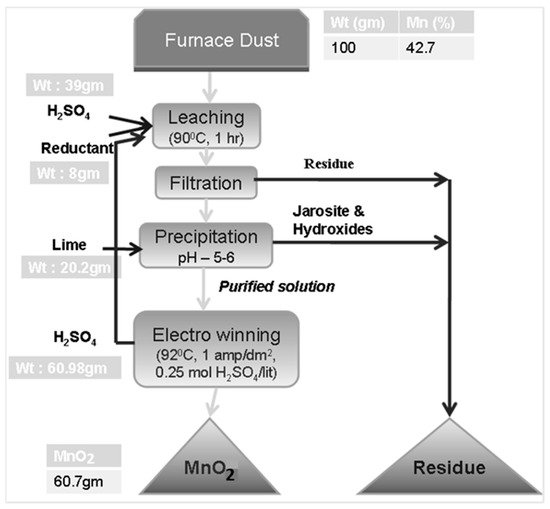 Ferromanganese furnace dust is an environmentally problematic by-product of FeMn alloy production. The main conclusions of the study are: