Submitted Successfully!
Thank you for your contribution! You can also upload a video entry related to this topic through the link below:
https://encyclopedia.pub/user/video_add?id=11733
Check Note
2000/2000
Heat Stress and Decision Tools
Edit
Upload a video
This entry is adapted from 10.3390/cli9060102

Over the last few decades, Urban Heat Stress (UHS) has become a crucial concern of scientists and policy-makers. Many projects have been implemented to mitigate Urban Heat Island (UHI) effects using nature-based solutions. However, decision-making and selecting an adequate framework are difficult because of complex interactions between natural, social, economic and built environments. This paper contributes to the UHI issue by (i) identifying the most important key factors of a Decision Support Tool (DST) used for urban heat mitigation, (ii) presenting multi-criteria methods applied to urban heat resilience, (iii) reviewing existing spatial and non-spatial DSTs, (iv) and analyzing, classifying and ranking DSTs. It aims to help decision-makers through an overview of the pros and cons of existing DSTs and indicate which tool is providing maximum support for choosing and planning heat resilience measures from the designing phase to the heat mitigation phase. This review shows that Multi-Criteria Decision Analysis (MCDA) can be used for any pilot site and the criteria can be adapted to the given location accordingly. It also highlights that GIS-based spatial tools have an effective decision support system (DSS) because they offer a quick assessment of interventions and predict long-term effects of urban heat. A comparative study using specific chosen criteria concludes that the DSS tool is well suited and fulfils many prerequisites to support new policies and interventions to mitigate UHS.

Urbanization and an exponential increase in population have brought the concept of Urban Heat Island (UHI) and heat stress into the limelight. The world has seen adverse effects, particularly a rise in air temperature, a higher mortality rate, and changes in weather patterns [1]. Most studies have focused on the UHI in densely populated capital cities and there is insufficient literature available for smaller cities [2].

Different authors explained that UHI has severe effects on the most vulnerable populations, especially during the summer season. This phenomenon indeed highly raises the consumption of cooling energy as well as the corresponding peak electricity demand of cities. Therefore, the UHI can be linked with a significant increase in urban pollutant concentrations and is concerned with the city’s carbon footprint as well as ground-level ozone. Urban Heat Stress (UHS) severely affects health, comfort, and increases mortality problems [3]. In current times, urban planners and policy-makers are keen to address issues such as increased urban heat due to climate change triggered by human activities.

Europe, Australia and North America are the major continents among those working to mitigate UHS in different ways, for example, by increasing urban forestry or by using green and blue interventions. On the other hand, Asia has also worked on thermal comfort but their focal point is grey and blue infrastructure. Accommodating heat stress measures in urban areas is not the easiest task as it encounters issues such as water scarcity, high cost and unsuitable environments for green infrastructure.

It is the responsibility of the decision-makers to evaluate multiple possible solutions to resolve the issues by considering specific criteria. Urban planners are still perplexed due to the severity of changes that have taken place in different zones.

Sometimes, alternative decisions are to be taken in order to combat the complex situation by considering some criteria [4]. It is observed in previous studies that every location has unique characteristics and parameters and the decision-makers have concerns about criteria such as cost, efficiency, and materials. For every location change, the mitigation measure should be modified. To solve these issues, a proper decision support system (DSS) is required to help decision-makers.

A DSS is an information system that requires judgment, determination, and a sequence of actions. It assists the mid-and high-level management of an organization by analyzing huge volumes of unstructured data and information. It is either human-powered, automated or a combination of both and it can be used in any domain due to its versatility.

There are many studies related to climate vulnerabilities—some have used economic or mechanistic modeling [5–7] and other researchers have used outranking approaches that later have been criticized due to axiomatic violations [8,9]. The number of characteristics required for the evaluation of UHS management similarly challenges is not constant. There is a need for a tool that allows one to work in consideration of all parameters simultaneously and helps to identify negative trends of urban heat and eventually allow better adaptation measures.

We have used a qualitative and exploratory approach for the review of DSTs which are developed for urban heat resilience under the banner of different projects. Tools were compared with selected criteria were obtained after going through the literature and serve as a methodology, as shown in Figure 1. 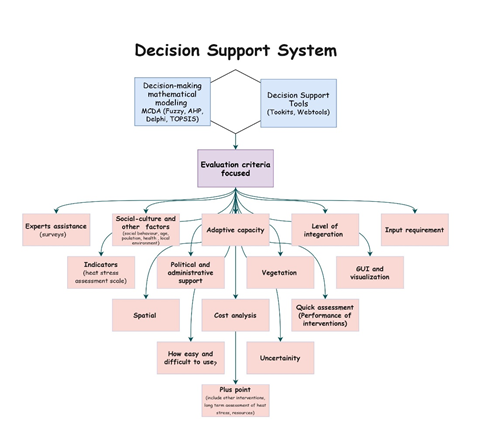 Fig.1 Methodology of the review paper.

Multi-criteria mathematical models [3,12–19] are a valuable, theoretical, qualitative, and quantitative way of decision making and also a first step towards developing a DST. These models are supported by expert assistance which considers the socio-cultural factors and local environment. They cover the criteria which can be assessed statistically, e.g., cost analysis and political and administrative support.

The AHP is a qualitative approach and depends on the judgments of the people who are involved in the task, but lengthy pairwise comparisons might lead to inconsistency. Multi-criteria outranking is also controversial, and questions were raised about outranking procedures, nonlinearities’ incorporation, and aggregation processes. Similarly, in FDEMATEL, no significant relationships could be found for some criteria. Another issue is that the questionnaire can have a low response rate, be time demanding, and have a low probability of filtering out specific opinions. Most of the time, this is a trial and error process.

Decision-making for urban heat mitigation involves multiple and complex steps that vary on different stakeholders with various adaptation measures and needs. Plus, during the process of decision-making, practitioners should take into consideration the criteria of biodiversity, social innovation, governance, and metropolitan management within a socio-ecological framework.

Some North American, European and Australian DSTs are critically analyzed concerning all the criteria which were considered in this review paper. The results are summarized and classified in Fig.2. For future development, recommendations of approaches learnt from the surveyed tools are highlighted by a colour-coding scale shown in Fig.3. 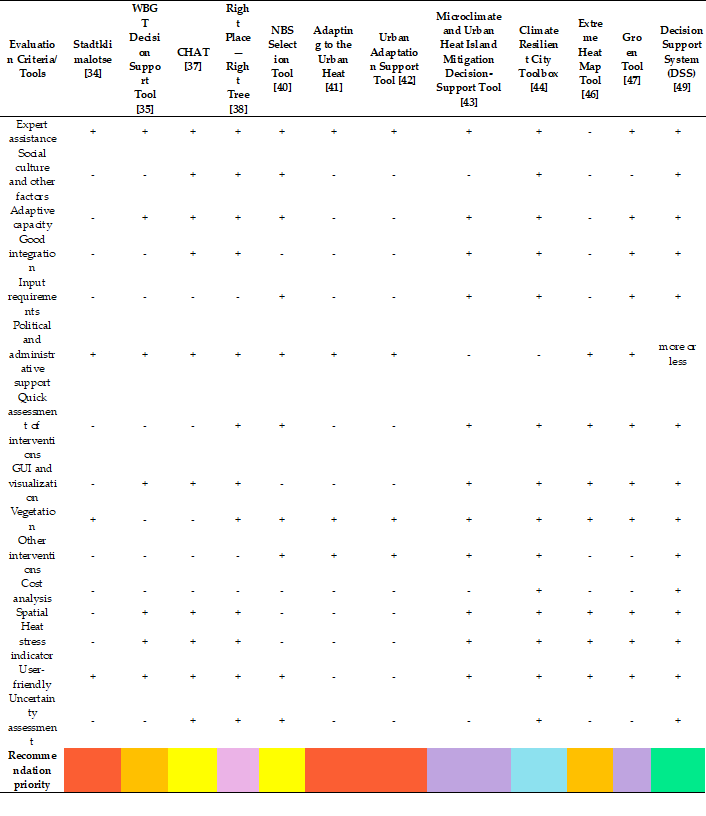 Fig.2 DSTs with respect to each criterion.

The DSS [49] was developed in the framework of the European project “Development and application of mitigation and adaptation strategies for counteracting the global phenomenon UHI”. This tool is user-friendly and covers many aspects which are needed to support urban planners.

It is known that every testing (pilot) site is different depending on several factors such as climate, population, group of persons, building infrastructure, availability of existing interventions and number of heat events. The development of a DST depends on the scale of the project. Objectives and limited spatial coverage are always a drawback because all decision results are based on different pilot sites’ data

Decision-making is a difficult task that has to go through different phases such as identifying reliable and efficient measures, assessing the challenges to investigate the case studies, and building a systematic framework for decision support. The MCDA approach is a valuable and important initial step to developing a DST to deal with UHS. Toolkits in the form of handbooks are neither spatial nor interactive. Web-based tools are mostly interactive and can assess green, blue and grey interventions on heat impact in real-time and help decision-makers take actions on the heat vulnerability of the suspected area. In these tools, economic and environmental assessment can be performed quite easily through a graphical interface; however, the results always depend on input data which are often difficult to obtain.

In this review and comparative study, we conclude that despite many existing publications and reported tools, there is still room for improvement, which can be achieved by a holistic approach dealing with subjective and objective aspects of heat stress, combining various inputs from sensors as well as from experts and residents’ feedback, and using different techniques such as MCDA, GIS, urban planning and, in the end, artificial intelligence tools to correlate these aspects with each other to develop a reliable DSS for the mitigation of heat stress.