Submitted Successfully!
Thank you for your contribution! You can also upload a video entry related to this topic through the link below:
https://encyclopedia.pub/user/video_add?id=11717
Check Note
Maria Pia Ferraz 2021-07-06 17:33:28
I really liked this entry. It is a very good work! Congratulations.
2000/2000
Biomolecules and Skin Infectious Diseases
Edit
This entry is adapted from 10.3390/pharmaceutics13071012

Skin infections are amongst the most common infectious diseases, ranked as the fourth leading cause of human illnesses. Both bacteria and viruses are responsible for many serious, difficult to treat skin conditions. Fungi are also highly prevalent in skin diseases. Skin infections present considerable threats to a person’s health, psychological wellbeing, capacity to operate, and social involvement.

In assigning priorities, skin infectious diseases are frequently classified as minor when compared to infectious diseases of high mortality rates, such as tuberculosis or HIV. However, skin infections are amongst the most common and prevalent diseases worldwide. Elderly individuals present an increased susceptibility to skin infections, which may develop atypical signs and symptoms or even complicate pre-existing chronic disorders. When the skin fails to correct or inhibit the action of certain pathogenic microorganisms, biomolecules endowed with antimicrobial features are frequently administered topically or systemically to assist or treat such conditions. (1) Antibiotics, (2) antimicrobial peptides, or (3) natural extracts display important features that can actively inhibit the propagation of these pathogens and prevent the evolution of infectious diseases. This review highlights the properties and mechanisms of action of these biomolecules, emphasizing their effects on the most prevalent and difficult to treat skin infections caused by pathogenic bacteria, fungi, and viruses. The versatility of biomolecules’ actions, their symbiotic effects with skin cells and other inherent antimicrobial components, and their target-directed signatures are also explored here.

Infectious diseases are emerging or re-emerging almost every year. They are a result of the presence and growth of pathogens, such as viruses, bacteria, parasites, and/or fungi, in the host organism, which can propagate between people. The type and extent of damage inflicted by these microbial agents, which is intimately related to the production and liberation of toxins that affect the regular tasks of each organ/system, could lead to the appearance of specific clinical symptoms [1][2].
Since the beginning of the 20th century, infectious diseases have been classified as the primary cause of death worldwide. Indeed, emerging infectious diseases are rising [2][3]. This trend is expected to continue, as newly evolved strains of pathogens emerge (multi-resistant) and enter the human population without a proper fighting response being available (e.g., severe acute respiratory syndrome (SARS) coronavirus). The increase in the global population and its aging, the climate changes, and the facility of travel between countries have all favored the emergence, evolution, and spread of these new pathogens [4]. Projection patterns of the evolution of this crisis have highlighted bacteria and viruses as the most prevalent and concerning group of pathogens: the first due to their increasing resistance to antibiotics and the second due to their high capacity to adapt to new hosts.
Skin infections are amongst the most common infectious diseases, ranked as the fourth leading cause of human illnesses [5]. Both bacteria and viruses are responsible for many serious, difficult to treat skin conditions. Fungi are also highly prevalent in skin diseases. Skin infections present considerable threats to a person’s health, psychological wellbeing, capacity to operate, and social involvement. In 2013, the socioeconomic burden associated with skin diseases was estimated at USD 75 billion and USD 11 billion for direct (healthcare expenses) and indirect (professional constraints) costs, respectively, in the USA [6]. As the population ages, the amount of people affected by skin conditions rises proportionally. Tears in the skin integrity, which become more frequent with age as the tissue loses its inherent elasticity and flexibility, are frequently inoculated by pathogens that invade the dermis, causing skin infections. In many situations, the skin microbiota and the antimicrobial factors produced by the various cell layers forming this tissue are capable of fighting infections and preventing serious illnesses from evolving [7]. However, as the pathogens evolve and mutate and the population ages, our inherent immune defenses become compromised, being unable to effectively respond in a timely manner to their action. Antimicrobial agents based on biological cues are, in many instances, essential to overcome the shortcomings of our immune system and assist in the treatment of infectious diseases [8]. Indeed, there are many antimicrobial biomolecules currently available to fight pathogenic microorganisms that affect the skin. Antibiotics, due to their effectiveness and accessibility, are among the most prevalent biomolecules to be used in treatments of infectious diseases. They target the physiology or the biochemistry of the microorganism, inhibiting their replication or inactivating specific functions, ultimately leading to their death. Yet, due to the appearance and propagation of resistant microbial cells, therapies for skin infections have become more challenging in the last twenty years [8][9]. New biomolecules that impart specific cell functions or leave a smaller environmental footprint are now raising more attention [10]. In the present work, an overview of the skin inherent mechanisms of action against microbial cells and the alternative biomolecules that may be used to assist in this action or surpass its limitations is presented. A complete description of the most prevalent skin infectious disease traits and the possible biomolecules that can be or are already being applied to treat such conditions is also provided, where special emphasis is placed on natural-origin biomolecules. Generally, this publication reviews the most recent research that explores the use of conventional or recently emerging biomolecules to treat skin infections.

3. Skin: The First Line of Defense

The skin is humans’ largest and most exposed organ, offering protection against the loss of endogenous compounds and external stimuli, including microbial invasion (Figure 1). It forms 8% of the body weight and is subdivided into three major layers, the epidermis which is the most superficial layer, the dermis located beneath the epidermis and made mostly of connective tissues, and the hypodermis, which is a deeper, subcutaneous tissue made from connective and adipose tissues [7][11][12]. 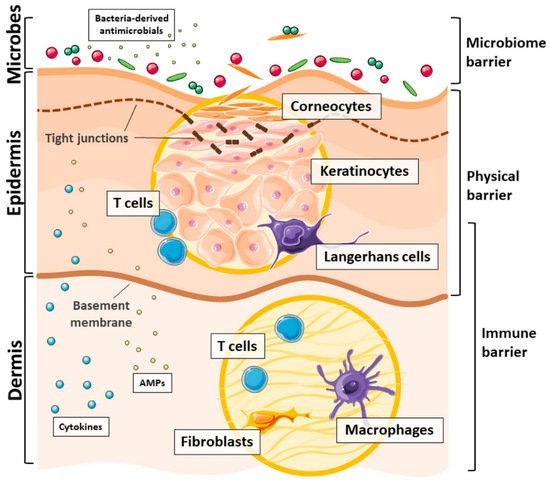 Figure 1. Division of the skin and its mechanisms of protection against microbial penetration (CC BY 4.0 license) [13].
The protective features of the skin vary across its regions and the age of the person, often generating conditions conducive for microbial growth in localized microenvironments or exhibiting properties that impart a direct antimicrobial protection. Microorganisms present along the skin are one of the largest communities of microbes in humans. Indeed, the cutaneous microbiota contains bacteria, fungi, and viral communities. These resident microbial species defend the host from pathogenic organisms by producing antimicrobial factors or stimulating cells to secret antimicrobial cues that prevent the growth and proliferation of pathogens [14][15]. For instance, the skin-resident coagulase-negative Staphylococci bacteria can produce toxins such as phenol-soluble modulins that attack more harmful strains of bacteria, such as Staphylococcus aureus or Streptococcus pyogenes. Further, they can work in symbiosis with the skin antimicrobial peptides (AMPs) to inhibit pathogen colonization [7].
The epidermis operates as the first line of protection against microorganisms. It is formed mostly of keratinocytes, whose phenotype and functions differ along the stratified epidermis, the stratum corneum, the stratum granulosum, the stratum spinosum, and the stratum basale. These keratinocytes express Toll-like receptors (TLRs) that trigger pathways that maintain the host–microbial homeostasis [16]. These stratums offer resistance against the penetration of most microbes by engaging with AMPs to fortify the integrity of the skin barrier. Indeed, the epidermis is formed mostly of AMPs and lipids, both exhibiting antimicrobial functions. AMPs are small peptide molecules that can both kill or inhibit microbial responses, limiting their growth. Their secretion is dependent on the conditions of the skin (healthy or infected) [17]. Antimicrobial lipids, in their turn, are synthesized and transferred to the surface of the skin during cell differentiation, being capable of fighting Gram-positive and Gram-negative bacteria and increasing the expression of pro-inflammatory cytokines to signal infections [18].
At the dermis, fibroblasts produce collagen, elastin, and other extracellular species while still increasing the skin antimicrobial signals and, in this way, working as immunomodulatory cells [19]. The dermis fibroblasts produce cytokines (interleukin (IL)-6, IL-8, tumor necrosis factor alpha (TNFα)), growth factors (vascular endothelial growth factor (VEGF), transforming growth factor beta 1 (TGFβ1)), and metalloproteinases (MMP-1) that stimulate the adhesion and migration of immune cells, such as macrophages, mast cells, leukocytes, and dermal dendritic cells [7]. Even though the antimicrobial action of the dermis is not as important as that of the epidermis, the infiltration and recruitment of immune cells to fight microbial pathogens that occur in this layer remain vital. These cells provide additional antimicrobial defense by promoting the liberation of large amounts of cathelicidins, such as the AMP LL37 [20], that not only fight microbial colonization but also stimulate keratinocyte proliferation and induction of angiogenesis. Indeed, in injured, infected portions of the skin, the dermal fibroblasts and the epidermal keratinocytes work in synergy to restore the skin barrier [19].
The hypodermis, also known as the subcutaneous layer, has a small but still very important part to play in protecting the skin against microbial infection. The adipose tissue of the subcutaneous layer can be subdivided into brown adipose tissue (BAT), white adipose tissue (WAT), and “beige” adipose tissue [21]. The WAT, which can be found close to hair follicles, altering in size as the hair grows, or underneath the dermal layer, is also capable of producing cathelicidin AMPs and expands in size for a quick proliferation of adipocyte precursors. A recent study reported a causal relationship between the expansion of adipose tissues and the hypodermis’s ability to protect against pathogenic cells [7][22]. This protective behavior inherent to all layers composing the skin relies on their cell components or immune cells to which they impart a specific function, by meticulously triggered pathways. Still, many pathogenic microbes can disrupt this specialized line of defense, acting quickly against the human body and causing serious skin infections. To overcome these shortcomings, antimicrobial biomolecules are frequently employed.

The response of the skin to microbial pathogen invasion is a highly coordinated phenomena that encompasses all skin layers and, in many cases, the skin microbiota. At a molecular level, the microbiota-produced antimicrobial factors, the host AMPs, and the antimicrobial lipids play a crucial role in fighting pathogenicity. However, the skin, on its own, is not always effective in fighting the penetration of bacteria, fungi, or viruses, and, as such, serious skin infectious may occur. Antimicrobial biomolecules, including antibiotics, AMPs, or plant extracts, may assist in overcoming this limitation. Their propensity to both control infections, eliminating pathogenic microorganisms, and be involved in important anti-inflammatory actions has rendered these biomolecules essential in medicine. Indeed, while inducing infection-solving immunity and regulating innate immunity, these antimicrobial biomolecules dampen and potentially damage pro-inflammatory reactions. Their varied roles and synergisms with innate substrates have been highlighted in the treatment of many skin infectious diseases. This review explored conventional and more recent therapeutic strategies based on active biomolecules to treat some of the most recurrent skin infections. Even though many do not consider skin infections a global problem and do not demand urgent solutions, modern research continues to dedicate its resources to finding more effective strategies that present the smallest impact on human health or our natural reserves.

More
© Text is available under the terms and conditions of the Creative Commons Attribution (CC BY) license (http://creativecommons.org/licenses/by/4.0/)
Upload a video for this entry
Information
Subjects: Infectious Diseases
Contributor MDPI registered users' name will be linked to their SciProfiles pages. To register with us, please refer to https://encyclopedia.pub/register :
Helena Felgueiras
View Times: 58
Revisions: 2 times (View History)
Update Time: 04 Aug 2021
Table of Contents
1000/1000
Hot Most Recent