Submitted Successfully!
Thank you for your contribution! You can also upload a video entry related to this topic through the link below:
https://encyclopedia.pub/user/video_add?id=11640
Check Note
2000/2000
Radiological Investigation of French Fossils
Edit
Upload a video

The accurate investigation of uranium-containing fossils in a museum of the City of Basel showed the following crucial points:

1 Storage of uranium-containing minerals or fossils may lead to elevated radon exposures for the staff. The monitoring of the room air is recommended: Eventual taken measures will reduce the exposure to radon (permanent air ventilation, airtight storage of contaminated objects).

2 The handling and preparation of such contaminated objects may lead to significant doses by inhalation of radioactive dust. Such work should not be envisaged without special precautions. These could be wearing protective mask and gloves, working in a clean-bench.

During a visit at a museum in the City of Basel, we got aware of high background dose rates in one of the storerooms. In this room, a special osteological collection from different find spots in France was the source for elevated dose rates near to the store facilities. The question arose, whether the measured dose rates could be problematic. Supposing uranium and other nuclides of this decay chain as the source, one has first to check for radon (222Rn). Emanated radon gas is hazardous for man. Several working places were situated in this storeroom and therefore exposed to radon. Another important question had to be answered about the exposition to radiation when such objects were worked with (inner radiation by inhalation of dust particles).

In annex two of the Swiss Radioprotection Ordinance (SRO) specific activity limits are defined for uranium and thorium[1]. For minerals and rocks, these limits must be lower than the exemption limit for NORM (normally occurring radioactive material), lower than 1 Bq/g each. The total mass must be lower than 10g of thorium metal (40 kBq of 232Th) and 100g of uranium metal (1.25 MBq of 238U).

For the calculation of incorporated doses, dose conversion factors for inhalation were taken from SRO.

The museum made available selected bone samples for a detailed investigation. All selected materials showed elevated dose rates. The fossils were collected at different places in Central France and were dated to the early Miocene.It is well known that fossil and subfossil specimens can be radioactive due to depositions of NORM. It is important to know the grade of this contamination of the specimens and to avoid any harmful effects caused by either direct radiation of the objects or incorporation of radioactive particles from such objects [2], [3]. 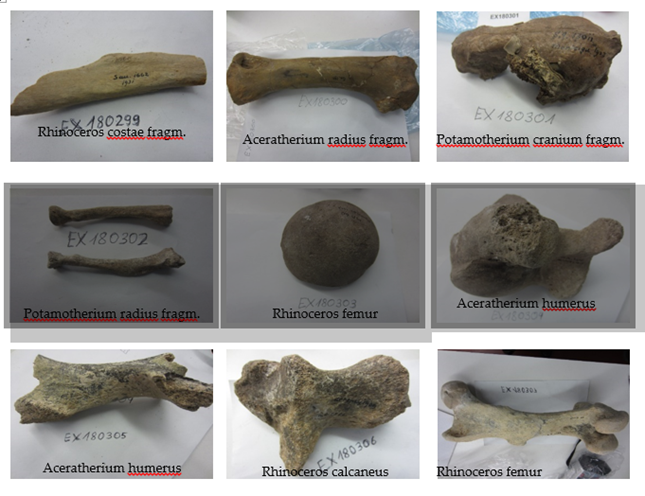 Table 1 Weight and origin of the investigated fossils

The dose rate of each fossil was determined at a distance of 10 cm using a dose rate meter from Automess.

The fossils had to be investigated in a non-destructive way. Therefore, they were place on top of a high-resolution germanium detector. Each fossil was counted at least twice with changing positions. The different counting of each object showed that the radionuclides were distributed relatively homogeneous within the bones.

For the quantitative estimation of the radioactivity, a geometry of a petri dish (4 cm height, diameter 6 cm) was applied. All emission lines and emission probabilities were compared with LNHB[4].

Decay series of 238U

The emission line of  234Th, the first daughter of 238U, at 63.3 keV, was taken for calculation the activity of 238U. Both radionuclides were in equilibrium. The presence of 235U caused problems for the determination of 226Ra at 186.2 keV (interference with 185.7 keV line from 235U). Instead, 226Ra was calculated via its daughter nuclides, 214Bi and 214Pb, knowing that there was no real equilibrium between 226Ra and the two beta-daughters. A secular equilibrium can be assumed only from 238U to 226Ra. 210Pb near the end of the decay chain showed lower activities than 234Th, the second nuclide of this chain. 210Pb and its daughters 210Bi and 210Po were again in secular equilibrium. Both nuclides are no gamma emitters.

Only six members of this series are detectable with gamma spectrometry: 232Th, 228Ac, 224Ra, 212Pb, 212Bi, and 208Tl. One can expect that the whole decay series is in secular equilibrium. Losses by volatilization of the 220Rn are negligible due to the short half-life of 56s. 232Th was analysed by its emission line at 63.8 keV, even though one has to consider interferences with the 234Th line at 63.3 keV. However, the activities showed to be nearly the same as its daughter 228Th. 228Ra, a beta-emitter, was determined via is daughter 228Ac, which is in secular equilibrium with 228Ra and 228Th.

Decay series of 235U

Radionuclides of global fallout and of the fallout from the fire at the nuclear power plant (NPP) of Chernobyl in 1986 were also analysed for. For the determination of the most important fallout para-meter, radiostrontium (90Sr), a destruction of the objects would be unavoidable. Therefore, we had to resign analysing for 90Sr, the objects were too precious. The focus was laid on the radiocesium nuclides 134Cs and 137Cs.

The radon activity (222Rn) of the storeroom was monitored in real time near two working places. Radon monitors, radon scouts from Sarad, were used for registration of the radon activity during two months.

Without any doubt, the highest contribution of an exposure comes from radon, which is emanated from the fossils and diffuses to the room air. Some working places are situated in the storeroom for the fossil collections. People working permanently in this room will get a dose from radon exposure, even when the room is ventilated permanently.  Radon in air was measured at two working places. Radon activities were 421±5 rsp. 427±5 Bq/m3. This is below the Swiss limit of annual mean activities for radon exposed working places[5] (1000 Bq/m3). According to Darby et al.[6], a mean annual activity of 300 Bq/m3 in the room air leads to an annual dose of about 10mSv. This is the limit value for permanently inhabited zones. For working places, there is a threshold level of 1000 Bq/m3  [7].

Radiation analyses of the fossils

This is about seven to ten fold the ambient dose rate in Basel-City. When working with such fossils at a distance of 5 cm eight hours a day, on would receive a dose of about 1.2 mSv/year. However, such a long exposure at 5 cm distance is not realistic. Therefore, we suppose that the risk for external radiation is not relevant.

In two samples, radiocesium could be detected (see Tabel 1). The sum of the found activities was between 2 and 18 Bq/kg. The detection of 134Cs seems not to be plausible. The half-life of 134Cs is two years. Therefore, any contamination with this nuclide should be disintegrated totally within 20 years after the collection of the fossil samples.

Natural radionuclides of the decay series

We found 238U at its daughters to be the most prominent radionuclides, whereas there seemed to be no real equilibrium in the decay chain. These inconsistencies can be probably explained with different solubility behaviour of the radionuclides and the loss of 222Rn by emanation. 238U (via its daughter 234Th) showed activities between 1 and 10 kBq/kg of bone material. The bone material of the Potamo-therium species showed a significantly lower contamination degree. 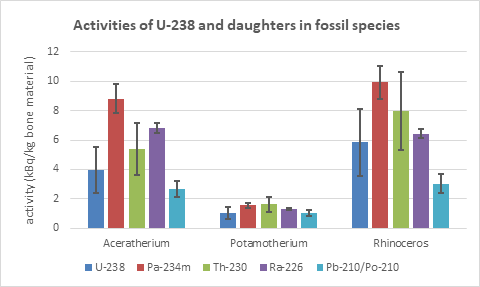 The fossils contained 232Th and its daughters in activity concentrations less than 10% of the 238U series. Here, secular equilibrium seems to be reached: The activities of 232Th are nearly the same as for 208Tl at the end of the decay chain. The loss of the volatile 220Rn is negligible due to its short half-life of 56s). Therefore, equilibrium is maintained until the end of the decay chain. The Rhinoceros species were most contaminated. 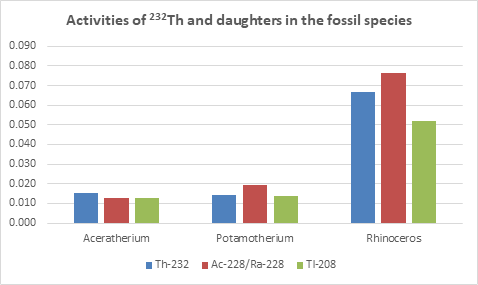 Besides some higher activities of 211Pb, a radionuclide near to the end of the decay chain of 235U, the radionuclides seemed to be in secular equilibrium, also the volatile species 219Rn (it has a very short half-life of 4s). As expected, the activity concentrations are lower than those of the other decay series. Potamotherium species were least contaminated. 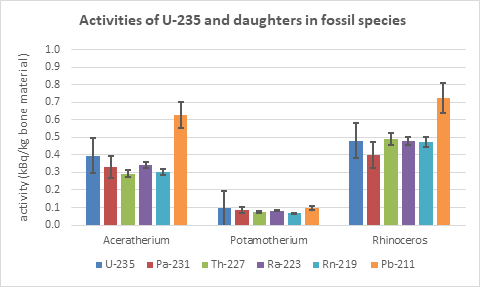 In an undisturbed environment, the quotient of the activity concentrations of 238U and 235U is expected to be 21.7 due to the isotopically pattern of natural uranium. In the fossils, this factor is 11.3 ± 2.0; therefore, considerably lower. The 235U in the fossil material is slightly enriched.

The Swiss Radioprotection Ordinance provides special criteria for the disposal of NORM[8]. Materials should not contain more than 100g of natural uranium or 10 g of natural thorium. Materials, which are not conform to one of the limit of exemption, are subject to the guidelines of the SRO, especially concerning the disposal of such materials.

None of the fossils reached any limit of exemption. Therefore, all fossil samples are liberated from SRO.

A relevant dose could result from the internal corporation of radioactive dust from fossils, when such fossils were handled with, e.g. cutting, rasping etc. With the help of the individual conversion factors for adult persons for inhalation[9] and the mean activity of the dose relevant radionuclides, a inhalative dose was estimated on the basis of an inhalation of 100 mg of fossil dust (see table 2). It can be clearly seen, that the most dose relevant nuclides are 227Ac and 230Th, followed by 234U, 238U and 231Pa. In addition, although the 238U-series is dominant in the analysed fossils the dose from 227Ac con-tributes most to the whole dose. The inhalation of 100mg of dust would result in an dose of ≈45 mSv, this is much more than allowed as annual dose for the public (limit: 1 mSv/year) and even more than 20 mSv/year for people, which are professionally exposed to radiation.

Table 4  Estimated dose contributions of the dose-relevant radionuclides for the inhalative incorporation of 100 mg of fossil dust. * mean dose rate measured at different sides of the object at a distance of 10cm.  **d.w.: dry weight.

Collections of minerals or fossils may result in a rise of the radon contamination of the room air by emanation. That leads to rise of the annual dose for persons working in such an environment. A mean radon activity concentration of 300 Bq/m3 leads to an annual dose of about 10 mSv. Therefore, it is recommended to ventilate such rooms permanently with fresh air or to store uranium containing minerals and fossils in airtight containers or cabinets.

In the present case, the permanent ventilation keeps the level of radon at about 400 Bq/m3, which is conform to the Swiss law.

A contamination by inhalation of dust from such objects has to be taken more seriously. As calculated with the data of nine investigated fossil samples, we estimated the dose by inhalation of 100 mg dust to about 45 mSv. This may happen when fossils are prepared without any precautions. In the present case, the preparation of fossils are executed in clean-benches, which have an in depended air circulation system. Therefore, the uptake of dust should be as low as possible.

Rooms of a museum, where uranium containing minerals or fossils are stored, should be monitored for radon. Working places, which are situated in such store rooms are probably categorizes as radon-exposed working-places. Consequently, a permanent personal dosimetry of the staff could be prescribed from the Federal authority. Any preparation of contaminated fossils should be executed with well-defined precautions (FFP3 mask, gloves, clean-bench as working place).

In the present case, the mentioned precautions were realized.