Submitted Successfully!
Thank you for your contribution! You can also upload a video entry related to this topic through the link below:
https://encyclopedia.pub/user/video_add?id=11638
Check Note
2000/2000
Sediment load of River Birs-System
Edit

In 2015, the environmental laboratories of the cantons of Berne, Jura, Basel-Country and Basel-City, started a coordinated monitoring of the sediments of the River Birs and its major Affluents.

The river Birs and its tributaries drain an area of about 900 km2 in the Jura Mountains (Northwest Switzerland). The source of the Birs is located southwest of Tavannes, canton of Berne, at the foot of the Pierre Pertuis massif. After a course of 75 km through the cantons of Berne, Jura, Solothurn, and Basel-Country, the Birs joins the river Rhine in Basel-City. The main tributaries of the Birs are the rivers Sorne, Trame, Lüssel, Lützel (Lucelle) and Scheulte. In 2009, the Construction and Environmental Protection Directorate of Basel-Country reported the contamination of Birs sediments with PCBs [1]. In 2016, the Federal Office of Environment launched an investigation to determine the degree of pollution of the river sediments with regard to PCBs and dioxins. Below the industrial site of Choindez, a hot spot of PCBs was found [2]. In 2015, the environmental laboratories of the cantons of Berne, Jura, Basel-Country and Basel-City, repeated a coordinated survey of the sediments of the Birs and its major tributaries. The approach to the investigation was integral, this time focusing on heavy metals and PCB-levels as well as a biological assessment of the sediments. In addition, sediment samples were examined for stannanes and radioactive contamination.

Sediments are the “Long-term memory” of water bodies because they act as sinks and sources for many substances of environmental concern. Lake sediments can act as a chronological diary because of the permanent sedimentation resulting in undisturbed sediment layers, which can be dated. In rivers, such sedimentation processes are normally disturbed or destroyed by flooding. Nevertheless, they are very important for the monitoring of a river. A broad range of environmental substances (e.g., heavy metals, polycyclic aromatic hydrocarbons, pesticides, organotin compounds, or radionuclides) adsorb well onto river suspended matter, which in turn deposits in the sediment compartment. 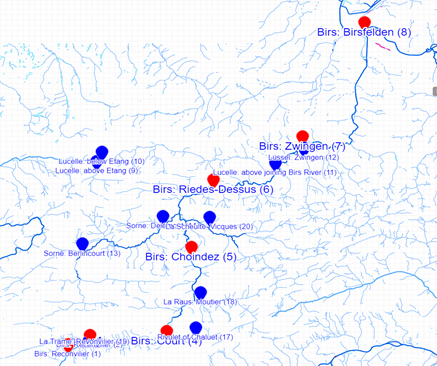 Organotin compounds, or stannanes, are organic derivatives of the tetravalent tin cation, derivatized with one, two, three or four functional groups. Especially stannanes with three functional groups are used as fungicides by the textile and paper industry, for conservation of paints (anti-biofouling) and prevention of algae growth on marine vessels, and as fungicides in agriculture. Stannanes are stabilizers in polymers and can act as catalysts in chemical processes. They are also used as different salts. Take the triphenyl-tin cation as an example, with hydroxide as anion it acts as acaricide (Cyhexatin) and miticide, whereas with chloride as anion it acts as a biocide. As acetate it is used as a potent fungicide.

Stannanes are compounds with high toxic potential for water organisms. Therefore, they were gradually banned from the market until 2003. Tributyl-tin (TBT) is one of the most toxic stannanes for our rivers and lakes. The legal limit value for TBT in surface water is 0.1 ng/L. In our investigation, we were looking for tetrabutyl-tin (TTBT) and seven derivatized tin cations: monobutyl-tin (MBT), dibutyl-tin (DBT), tributyltin (TBT), triphenyl-tin (TPT), monooctyl-tin (MOT), dioctyl-tin (DOT) and tricyclohexyl-tin (TcHT).

Radioactivity is a ubiquitous phenomenon. Radioactive elements are the source of a permanent background radiation on earth, in the atmosphere and in water. Uranium, thorium and radium are representatives of these so-called naturally occurring radioactive materials (NORM). Radioactive elements can also be technologically enriched (TENORM). On the other side, man-made radionuclides add to the radioactive contamination of our environment. Since 1945, over 900 atomic bomb tests in the atmosphere resulted in a global fallout, mainly spread across the northern hemisphere. This global fallout contained long-lived radionuclides, such as 137Cs or 90Sr. In addition, the emissions due to nuclear reactor accidents, such as in Chernobyl in 1986, increase the contamination level. In 1986, the sediments of the Rhine River contained up to 1,000 Bq/kg 137Cs [3].  Today, the radioactivity load in the sediments of the Rhine lies between 8 and 15 Bq/kg dw. This remarkable decrease of the activity is due to the half-life of 30 years and due to transport of contaminated sediments downstream to the North Sea.

Stannanes with three functional groups are now banned from the market. Therefore, instead of limit values, different target values were formulated for river sediments. The International Commission for the Protection of the river Elbe (IKSE) [4] has defined 25 µg/kg for some of the stannane groups. The German Working Group on water issues (LAWA) defines a target value of 2 µg/kg for tributyl- tin compounds. The ordinance for the Implementation of Water Framework Directive (VO-WRRL) [5] imposes 20 µg/kg for triphenyl-tin and 40 µg/kg for tetrabutyl-tin compounds.

In Swiss legislation, some limit values exist for dissolved radionuclides in surface waters (immission limits) [6]. These limits are based on the consummation of drinking water from such a source, supposing to lead to a maximal ingestion dose of 0.3 mSv/a. Using distribution coefficients between the water and the sediment phase (KD-values), limit values for river sediments can be estimated (Table 1).

Stannanes In the Birs sediments, trisubstituted species, tributyl-, tricyclohexane-and triphenyl-tin compounds were below the limit of quantification (< 2 µg/kg dw). Triphenyl- and tricyclohexane tin compounds were ten times lower than their target values. The concentration of tetrabutyl-tin was even twenty times lower than the target value of 40 µg/kg dw. For mono- and diaryl stannanes the target value of 25 µg/kg dw is nowhere exceeded. The highest stannane concentrations were found in the sediments near the mouth of the Birs in Basel. Here, the proportion of treated wastewater in the river is high in comparison to the upstream reaches. The stannane concentrations were within 50 % and 60 % of the target values for dibutyl-tin monobutyl-tin compounds, respectively. Overall, a distinct point source of stannane contamination was not found in any of the Birs sediments. Tri-substituted stannanes were not detected in the entire Birs catchment area. They were not applied in the entire river catchment area. Concentration of mono- and disubsituted stannanes were slightly elevated in regions where treated wastewater is drained into the Birs River.

Table 2: Stannanes and artificial radionuclides in sediments of the Birs River. 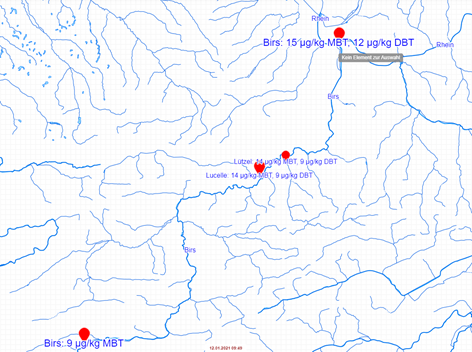 Radionuclides Two artificial radionuclides were detectable in the river Birs sediments. As expected, due to the global fallout and the fallout from the Chernobyl-disaster, 137Cs was present in all sediment samples (4 – 10 Bq/kg dw). In one sediment sample, sample point Zwingen, traces of 60Co were detected in the sediment. Unfortunately, this result could not be confirmed in a second sediment sample. However, the activity was well below the immission limit (4,000 Bq/kg dw). 134Cs was never detectable due to its short half-live of two years.

Stannanes Similar to the main river Birs, tri-substituted stannanes were not detectable in any of the investigated tributary sediments (< 2µg/kg dw). Highest concentrations of monbutyl-tin compounds were found in the Lucelle (Lützel) river (14 µg/kg dw). For dibutyl-tin compounds, the highest values were found in the sediments of the Lucelle (reaching 60% of the target value) and the rivulet of Chaluet.

Radioactivity As expected, the radioactivity level of the sediments of the Birs tributaries was somewhat higher due to the lower water regime of these rivers. In one sediment sample from the river Lucelle (sample point No. 11), 60Co traces were detectable. This sample point is located just upstream of the confluence with the river Birs and in close proximity to Zwingen (sample point No.7), where 60Co was found in the Birs sediment. Again, the radioactivity was very low (2 Bq/kg dw) and could not be confirmed with a second analysis. Further on-site investigations did not result in any plausible source for the 60Co.

Table 3: Stannanes and artificial radionuclides in sediments of the Birs tributaries. 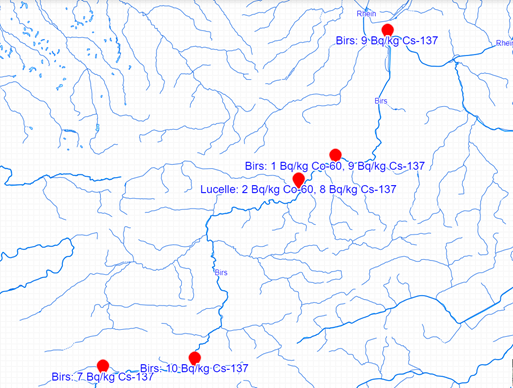 In general, stannane concentrations in the sediments of the river Birs and its major tributaries were low and well below any target values. The sediments of the tributaries Lucelle and Lüssel showed slightly elevated concentrations for monobutyl-tin, and the sediments of the rivulet Chaluet for dibutyl-tin compounds. The same stannane groups were also elevated in the sediments of the river Birs at Birsfelden, above the confluence with the Rhine. This pattern is typical for a river catchment with high input of treated wastewater. Tri-substituted tin compounds were below the detection limit in the entire catchment. No hot spots were detected. Therefore, the sources of stannanes are diffuse, which results in a low overall contamination level. In order to keep the stannane concentrations this low it is important to ban the usage of PVC-pipes in the sewerage systems and to consecutively replace them with pipes made of PP and PE.

The catchment area of the river Birs is free of any nuclear industry and of industries dealing with radioactive materials. Therefore, our investigations showed the “normal” background contamination with artificial radionuclides, including the global fallout and the Chernobyl fallout. Two sampling sites showed a low activity of 60Co, but upon re-sampling these values could not be verified. However, it is interesting that the sites are geographically corresponding. Still, the found activities are well below the immission limits.