Submitted Successfully!
Thank you for your contribution! You can also upload a video entry related to this topic through the link below:
https://encyclopedia.pub/user/video_add?id=11515
Check Note
2000/2000
Neuro-Monitoring in Intravenous Anaesthesia
Edit
Upload a video
This entry is adapted from 10.3390/jcm10122639

In children, these signs are influenced not only by both the depth of sedation and the mechanism of action of the specific anaesthetic agent, but also by the typical age-related changes of a developing brain [1]. Moreover, the current clinical condition and underlying co-morbidities might significantly affect the validation and application of this monitoring [2][3][4]. Therefore, although recent studies have shown that they are worth being used in children [5], many of the available monitoring methods show limitations when applied to paediatric patients and have to be cautiously used, especially in those aged less than 1 year [6][7][8].

For daily practice, in addition to the unprocessed EEG (the raw cortical EEG), two different groups of EEG-based devices are currently available. These are the EEG-derived indices (processed EEG or p-EEG) and the spectrogram or Density Spectral Array (DSA) [9] (Figure 1). 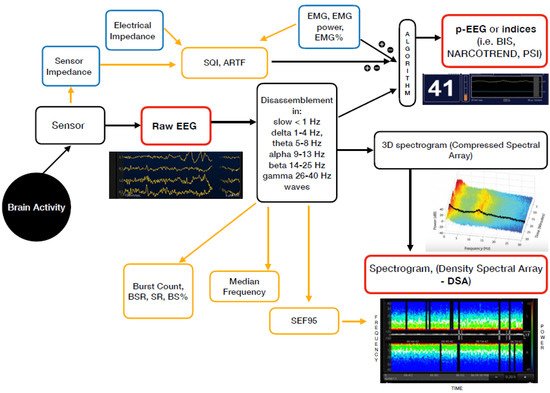 Figure 1. Mechanism of action of the currently available EEG derived anaesthesia monitoring (in red). The sensor is placed on the forehead and records the electrical potentials produced in the cortex resulting in the raw EEG. The majority of the EEG-derived monitors work by disassembling a complex EEG waveform (the raw EEG), into many series of waves of different frequencies (Hertz—Hz). These, together with several of the EEG variables, are converted into a single index through mathematical algorithms by the processed EEG (p-EEG) devices. The obtained index represents the level of hypnosis. However, the index can also be affected by the Electromyography (EMG) and the Signal Quality Index (SQI or ARTF). The spectrogram, is a real time monitoring which portrays all the EEG frequencies and their power over the time in a three-dimensional method (3D spectrogram or Compressed Spectral Array). The latter is then integrated in a two-dimensional plot using colours to represent different powers in the Density Spectral Array (DSA). Derived additional parameters are the Spectral Edge Frequency (SEF95), Median Frequency and the Burst Count (burst/minute) Suppression Rate (SR), Burst Suppression Ratio (BSR), Suppression Ratio (SR) or BS% Indicator (Burst suppression percentage). These can be either represented on the display by a number or visualized on the Spectrogram.

The processed EEG (p-EEG) devices convert several of the EEG variables into a single index through mathematical algorithms. The obtained index represents the level of hypnosis. Some examples of p-EEG monitors are the Bispectral Index Monitor (BIS, Medtronic Inc.), the Patient State Index (PSI, Masimo Inc.) of the SEDLine brain function monitor or the Narcotrend index (Narcotrend Inc.). Finally, the Response and the State Entropy measures the degree of disorder in the EEG together with the electromyography (EMG) signals [10].

Differently from the pEEG, the Density Spectral Array (DSA) or spectrogram is a real time monitoring method which portrays all the EEG frequencies and their power over the time in a three-dimensional method. The latter is then integrated in a two-dimensional plot using colours to represent different powers [11].

Table 1lists some of the most widely used EEG-based anaesthesia monitoring devices which are currently available, along with their key features.

The EEG ranges from a wakefulness pattern characterised by beta (13–25 Hz) and gamma (25–40 Hz) oscillations, to an isoelectric pattern, which represents an anaesthetic-induced coma with profound hypothermia [9]. An unconscious brain under surgical anaesthesia usually shows slow (<1 Hz) and alpha (8–13 Hz) oscillation. After induction of anaesthesia or in case of excessive sedation, slow oscillation or occasional burst suppression can occur. However, the EEG pattern also differs in relation to the anaesthetic drug administered. In this way, the DSA allows a trained anaesthetist to easily identify the specific patterns which correspond to certain hypnosis depth and anaesthesia trends [9][12].
Since the EEG-based devices correlate with the amount of both volatile and intravenous anaesthesia, they can predict the patient’s state of consciousness or unconsciousness [7]. They should lead to a better control of anaesthesia depth which, in turn, allows avoiding both over-sedation and light-anaesthesia [13][14]. In adults, this has been proven not only to reduce time to emergence, tracheal tube removal, and time to PACU discharge but also in decreasing post-operative nausea and vomiting and delirium as well as in lowering the overall amount of anaesthesia given. [15][16][17].
In children, only a few studies have analysed correlations between EEG-based monitors and the post-anaesthesia outcome [18][19][20][21]. Moreover, the currently available devices for the paediatric population are all based on algorithms which have been tested on adults [7].
Notwithstanding, some studies demonstrate that BIS and Narcotrend monitors are associated with a reduced emergence time and a decreased discharge-time from PACU after paediatric general anaesthesia [18][19]. However, discordant results have been found in a randomised trial on the same topic in paediatric cardiac patients [20]. Although a correlation between the use of pEEG devices and the reduction of awareness episodes has not been clearly demonstrated in children, the anaesthesia monitoring is considered to be also useful in this area [21]. An ongoing prospective, observational, multicentre study aims to further investigate the role of EEG monitoring in infants younger than 36 months. The study observes the incidence of isoelectric EEG events (defined as EEG amplitude less than 20 μV for 2 s or more) and its association with neurological outcome and quality of life in children undergoing at least 30 min of inhalational or propofol-based general anaesthesia [22].
Despite some studies demonstrated that EEG-based monitoring devices appropriately correlate with specific EEG signs during sevoflurane and propofol anaesthesia in children older than 1 year of age [5][13], the paramount evidence of their beneficial effects is mostly related to total intravenous anaesthesia and propofol (TIVA). In fact, a linear slowing of EEG and a lowering of BIS index has been demonstrated concurrently with the increasing in propofol blood concentration in children [5].
A survey of European paediatric anaesthetist in 2018 showed that the main application of EEG monitoring occurs during TIVA and in children over 4 years of age, with the aim of avoiding awareness [23]. Furthermore, the use of TIVA has recently emerged into the common practice of paediatric anaesthesia. However, despite fairly reliable models, doubts still exist regarding the pharmacokinetic and pharmacodynamic variability of anaesthetic agents among different ages. In this scenario, the use of anaesthesia depth monitoring systems results very useful, especially when the TIVA is associated with Neuromuscular Blockers (NMBs) [24].

EEG-derived anaesthesia depth monitors perform well in children that should be applied for guiding clinicians in providing the correct dose of general anaesthetics. However, clinicians should be trained on the specific device applied with its own technology, in order to draw the right interpretation. Moreover, age, type of anaesthesia and underlying neurologic conditions should guide clinicians to correctly titrate medications, beyond the monitoring result by itself.
NIRS and brain oxygenations monitoring represent a relatively recent technological advancement. It is clear that acute drop in brain oxygenation will have an impact on the neurological outcome, but the specific intervention that should be applied for acute derangements is still to be validated. NIRS can monitor brain oxygenation in the area where the sensor is applied, and it should not be interpreted as a surrogate index of brain autoregulation. In fact, the limits of autoregulation may vary according to the age, but also to the other physiological parameters. Then, NIRS should be clinically interpreted under the light a more comprehensive clinical condition, which might evolve time by time during anaesthesia and surgery. Nevertheless, both monitoring should be implemented in the daily practice, especially when the most fragile population is treated. Understanding the physiology and pathophysiology of brain autoregulation will be the next step of clinical research to define the limits of tolerance. Right now, clinicians should bear in mind that keeping young patients as close as possible to the baseline parameters is mandatory to stay away from the edge of loss of autoregulation.

More
© Text is available under the terms and conditions of the Creative Commons Attribution (CC BY) license (http://creativecommons.org/licenses/by/4.0/)
Upload a video for this entry
Information
Subjects: Anesthesiology
Contributor MDPI registered users' name will be linked to their SciProfiles pages. To register with us, please refer to https://encyclopedia.pub/register :
Nicola Disma
View Times: 187
Revisions: 2 times (View History)
Update Time: 30 Jun 2021
Table of Contents
1000/1000
Hot Most Recent