Submitted Successfully!
Thank you for your contribution! You can also upload a video entry related to this topic through the link below:
https://encyclopedia.pub/user/video_add?id=11380
Check Note
2000/2000
Drought and Salinity in Citriculture
Edit
Upload a video
This entry is adapted from 10.3390/agronomy11071283

Among the various abiotic stresses, drought is the major factor limiting crop productivity worldwide. Citrus has been recognized as a fruit tree crop group of great importance to the global agricultural sector since there are 140 citrus-producing countries worldwide. The majority of citrus-producing areas are subjected to dry and hot summer weather, limited availability of water resources with parallel low-quality irrigation water due to increased salinity regimes. Citrus trees are generally classified as “salt-intolerant” with high water needs, especially during summer. Water scarcity negatively affects plant growth and impairs cell metabolism, affecting the overall tree growth and the quality of produced fruit. Key factors that overall attempt to sustain and withstand the negative effect of salinity and drought stress are the extensive use of rootstocks in citriculture as well as the appropriate agronomical and irrigation practices applied.

Citrus has been recognized as a group of fruit tree crops of great importance for the global agricultural sector. The majority of the cultivated areas of citrus are located in the subtropical region, in the so-called citrus belt, defined by the 40° north–south latitudes, where the temperature rarely drops below severe freezing temperatures [1]. The majority of the citrus-producing areas are subjected to dry and hot summer weather, limited availability of water resources with parallel low-quality irrigation water due to increased salinity regimes. These factors negatively affect citrus tree productivity and fruit quality. Furthermore, the negative effect of climate change in citrus-producing areas should not be neglected since it augments the detrimental effect of salinity and drought stress [2].
Climate change, combined with the resulting desertification and overexploitation of water resources, due to overpopulation and intensification of agriculture, will be a challenge for the survival, growth, and sufficient yield of agricultural commodities [3]. Especially in citrus crops, water scarcity negatively affects plant growth and impairs cell metabolism, affecting the overall tree growth and produced fruit quality. Drought stress is also affecting the post-harvest handling of citrus fruit since it reduces significantly the reed thickness, rendering the fruit more prone to damage during handling and transportation [4].
Salinity and drought stress demonstrate similar physiological disorders to plants when they occur. Under the effect of salinity and drought stress, interlinked molecular responses are activated in order to provide an acclimation effect to the plant and initiate signaling cascades so as to facilitate the alleviation of the occurred stress syndromes [5]. There are several molecular interactions between salinity and drought stress that are impossible to separate in the field. Additionally, overall plant responses to simultaneous stress factors are complex and can be different in terms of response to each individual stress factor, depending also upon the duration and intensity of each stress syndrome [2].
Citrus are generally classified as “salt-intolerant” crops since irrigation with salinized water immediately arrests tree growth and negatively affects fruit quality, more than in many other crops [6]. Citrus at cellular and organism level can cope with salt and water deficit via the implementation of stress avoidance and stress tolerance mechanisms that block ion accumulation and tissue dehydration or maintain the integrity of cell structures and functionality of crucial biomolecules [7].
A key factor to the overall attempt to sustain and withstand the negative effect of salinity and drought stress is the extensive use of rootstocks in citriculture. Extensive work has been conducted upon citrus trees showing that rootstocks are a key component to the ability of the tree to withstand water scarcity since they modulate the physiological performance of the tree via variations in plant hydraulic conductance, leaf water potential, and stomatal conductivity [8][9].
Several reports indicate that citrus growers worldwide encounter several cultivational problems due to drought and salinity stress, which cause the decline in citrus yield and fruit quality. Thus, it is of paramount importance to provide the necessary means and insight that would guide farmers into the implementation of novel agricultural practices that would increase their income and minimize the negative impact of salt and water stress. Towards this goal, several traditional breeding programs are active and have produced several improved varieties of citrus plants [10]. The deleterious effect of water-related abiotic stresses such as salinity and drought stress can be minimized via the precise and sophisticated agricultural practices that take into account the actual tree needs and the availability of natural resources. The scope of the current review is to harness useful scientific data that could be utilized and guide the successful implementation of agronomic practices that improve citrus tolerance against stress factors.

2. Agricultural and Irrigation Practices That Cope with Salinity and Drought in Citrus

Figure 1 depicts specific agricultural practices in citriculture that could significantly alleviate the negative effects either from salinity or from drought stress. All these practices are analyzed in the following parts of this section. Citrus trees’ need for water depends on tree age, tree size, citrus species, climate, and soil type. As a general guide, research studies suggest that mature citrus (orange) trees need about 4000–5000 m3 of water per hectare and year [11]. Water use for grapefruit and lemon trees is about 20% higher than that of oranges, while water use for mandarins is about 10% less. Additionally, regarding the appropriate irrigation frequency, this depends on the season and soil type and ranges from 7 to 25 interval days [4][12]. There are three main irrigation systems used in citriculture: micro-sprinkler and sprinkler irrigation, which give good results mainly on sandy soils, and drip irrigation, one of the best techniques from a technical point of view, due to water economy. The irrigation schedule should start according to the soil moisture, which can be determined by soil samples with an auger or soil moisture sensors/tensiometers. The installation of tensiometers following the irrigation line in the middle point between two emitters (0.20 m from the emitter, 1 m from the trunk) is recommended for mature citrus trees. In the case of a micro-sprinkler, the installation of tensiometers at a distance of 0.5 m from the mini sprinkler or 1 m from the sprinkler is recommended [13]. Citrus has a relatively shallow root system. Thus, it is important to apply irrigation at the effective root zone, minimizing the deep percolation of water. For citrus, the effective root zone is usually up to 30 cm soil depth (depending on the soil type). At that depth, there is a minimum threshold of critical matric potential, which needs to be maintained. Typical thresholds are 20 kPa for sandy soils and 100 kPa for clayey soils [11][14]. 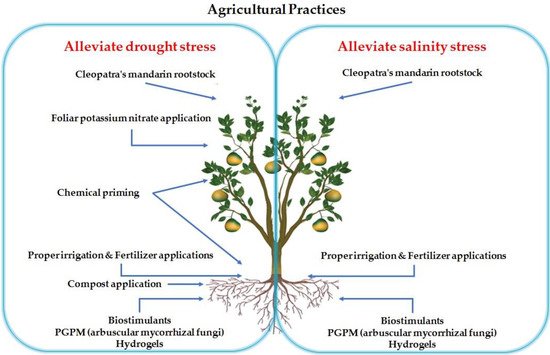