Submitted Successfully!
Thank you for your contribution! You can also upload a video entry related to this topic through the link below:
https://encyclopedia.pub/user/video_add?id=11350
Check Note
2000/2000
CRISPR, Livestock, Sustainable Food Production
Edit
Upload a video
This entry is adapted from 10.3390/su13126788

The growing demand for animal source foods to feed people has been pushing the livestock industry to increase productivity, a tendency that will continue throughout this century. The challenge for the coming years is to increase the food supply to ensure equity in access to high quality food, while maintaining global sustainability including combating climate change, avoiding deforestation, and conserving biodiversity, as well as ensuring animal health and welfare. The question is, how do we produce more with less? Classical methods to enhance livestock productivity based on the improvement of animal health, nutrition, genetics, reproductive technologies and management have made important contributions; however, this is not going to be enough and thus disruptive approaches are required. Genome editing with CRISPR may be a powerful contributor to global livestock transformation.

One of the greatest challenges of this century is how to face the increasing demand for food required by a growing world population. Throughout history, population expansion, environmental/climate change, and resource overexploitation have pressed humans to find better strategies to get food or, eventually, change their dietary habits. The current growth in world food consumption is not only driven by population growth, which will be almost 10 billion people by 2050 [1], but also by the greater per capita consumption of animal protein over vegetable carbohydrates (i.e., better quality food) as a result of greater disposable household income [2]. Over the last 30 years, extreme poverty has fallen from 35% to 9%, and consumption of meat, milk, and eggs in low- and middle-income countries has more than tripled. According to FAO projections, food demand in these countries will increase by more than 200 percent by 2050 [3]. With advances in production, human beings could achieve access to good quality food for almost the entire global population for the first time in history. No poverty and zero hunger, two of the Sustainable Development Goals pursued by United Nations [4], may be ‘economically feasible’ during this century. However, some questions remain. Are we prepared to produce more food? Could the planet bear it?

The extensive livestock production systems have largely relied on increasing the land area used for feeding animals to increase production. From a global prospective, this strategy is no longer feasible because we are reaching the limits of usable space on the planet [5]. It is not only an economic matter or an environmental concern, but in some regions it is also a physical limitation. During the past century, intensification by increasing the yield of livestock produced on the same land surface allowed an increase in productivity by improving efficiency [6][7], with the modern dairy industry being the most prominent example requiring considerably fewer resources per product unit than dairying in the middle of the last century. However, intensive farming practices based on maximizing productivity and profitability without consideration for environmental conservation have led to negative consequences. Focusing solely on increasing production is not compatible with natural resource conservation, and leads us to endless discussions such as intensive vs. organic production systems, or natural vs. synthetic foods, neither of which allows meeting both global production requirements and environmental conservation. To address this dilemma in the global context, livestock transformation is required, and new technologies are necessary (Figure 1). 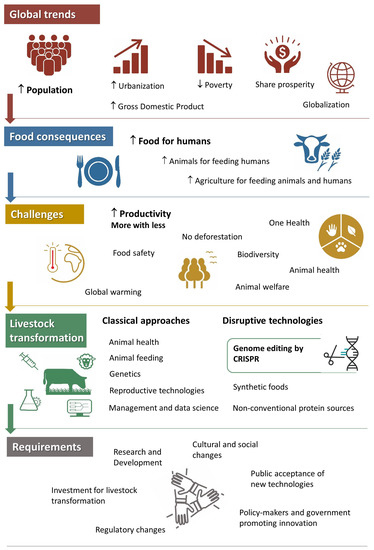 Figure 1. Global trends driving food production and livestock transformation. Global trends in the twenty-first century are dominated by human population growth, which is being associated with improving gross domestic product, decreased poverty, and shared prosperity, as well as increasing urbanization and globalization. The main consequence for the food supply is the need to increase animal production for feeding humans, and agriculture for feeding both animals and humans. The challenge is how to increase productivity while conserving the environment and biodiversity, ensuring animal welfare and health, and guaranteeing food safety and human health. A livestock transformation will be able to accomplish these goals, first by improving classical approaches related to animal health, feeding, genetic improvement, reproductive technologies, and management assisted by data science and artificial intelligence; and second, by developing potentially disruptive technologies like genome editing with CRISPR, or exploring alternative strategies like synthetic food and other non-conventional protein sources. The requirements for livestock transformation are not only research and development (R&D) and investment from the private sector, but also cultural changes. Governments and policymakers will need to develop appropriate regulatory systems to allow these novel tools to be assessed, and opinion leaders and media will play a role in public acquaintance with these new technologies.

3. The Arrival of Genome Editing

The CRISPR/Cas system, and previously TALEN and ZFN, are relatively recent genome editing tools that will contribute to the global livestock transformation. Applications of genome editing include improving productive and fitness traits in large animals, enhancing animals to achieve adaptation and resilience to ensure animal welfare, generating resistance to infectious and transmissible diseases, as well as controlling pests and disease vectors. Previous reviews have described the technical basis of this technology in livestock, and many scientific articles provide information on possible drawbacks and technical refinements to improve efficiency (e.g., see [8][9]). This review is focused on the scope and future perspectives for the application of this technology.
Since the first report of CRISPR-edited mammals was published in 2013 using mice [10], the CRISPR/Cas system has revolutionized genome engineering for a number of species. The technology was rapidly adapted to pigs [11][12], goats [13], sheep [14], and later to cattle [15]. The main use to date is CRISPR’s ability to edit the genome acting as molecular scissors with the ability to edit any given sequence including a single nucleotide. In the past century, the transfer of genetic material in a controlled and deliberate manner between animals was based on transgenesis, an approach where a transgene injected into an early-stage embryo would be integrated into the host genome. The so-called transgenic animals were first produced by pronuclear zygote microinjection of foreign DNA [16], a random phenomenon that often resulted in unexpected, variable and inefficient transgene expression patterns [17]. In the years that followed, homologous recombination in embryonic stem cells provided a suitable solution for gene targeting in mice and rats; nevertheless, this system never worked in livestock species [18][19]. With Dolly the sheep, the somatic cell nuclear transfer (SCNT) approach made it possible to alter endogenous loci directly in other species, opening an opportunity in livestock species [19]; but difficulties in nuclear reprogramming and low efficiency in obtaining viable offspring, which requires laborious and lengthy protocols, made this technology available only to a handful of research groups. In addition, any genome modification mediated by transgenesis never gained the sympathy of the general public, which discouraged research and investment. The need for a simpler, inexpensive, more efficient, and transgenesis-free technology to target modification of animal genomes was therefore necessary. With the arrival of genome editing and the CRISPR/Cas system, these issues were overcome and the technology is now ready to use.

Genome editing applications in livestock have been reported in proof-of-concept studies, research projects, as well as proposed for commercial use as seen by the increase in market-oriented studies. Since 2014, when the first reports with CRISPR/Cas system in large animals were published, the number of scientific reports published in peer reviewed journals increased to approximately 200 reports per year in 2020 (Scopus searching using CRISPR and cattle, or cows, or sheep, or goats, or pigs). Some leading genetic companies with a global presence, operating in different species, have announced innovative projects to apply genome editing-based technology to design specific traits in domestic animals. Recent developments indicate that this tool could be available in the market of genome-edited farm animals in the near future. An overview of the contribution of this technology to livestock transformation is depicted in Figure 2, and some examples of genome-edited animals illustrating the main or first reported ideas are summarized below. 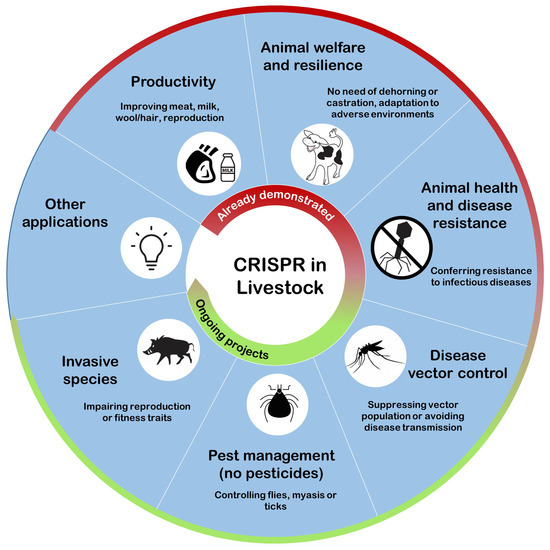 Figure 2. The contribution of CRISPR to livestock. Genome editing using the CRISPR/Cas system may improve livestock according to different strategies: (1) Improving animal productivity in terms of food quantity and quality; (2) Enhancing animal welfare by avoiding unnecessary invasive practices or conferring resilience to adverse environments; (3) Suppressing disease vector populations or impairing their ability to transmit disease; (4) Controlling pests like flies, ticks, and other species harming livestock; (5) Decreasing invasive species affecting livestock by impairing their propagation. Some of these applications have already been demonstrated, while others are currently being developed, and new ideas may be explored since the plasticity of genome editing technology has not yet been exhausted.