Submitted Successfully!
Thank you for your contribution! You can also upload a video entry related to this topic through the link below:
https://encyclopedia.pub/user/video_add?id=11219
Check Note
2000/2000
Mg-Based Hydrogen Absorbing Materials
Edit
Upload a video
This entry is adapted from 10.3390/app8081375

Chemical heat storage is one of the most promising alternatives for thermal energy storage (TES) due to its high energy density, low energy loss, flexible temperature range, and excellent storage duration. Mg-based materials are pretty suitable for the heat storage application. In the hydrogen storage area, Mg-based materials are promising candidates due to the large abundant reserve in the crust, the light weight of Mg element, and high hydrogen storage capacity.

Energy safety has faced great challenges due to the massive and long-term depletion of fossil fuels to meet the demands of about 80% of primary energy consumption. At the same time, this utilization of fossil fuels also brings severe air pollution. Under these circumstances, it is urgent to shift the focus on fossil fuels to renewable energy resources [1][2][3][4][5]. Fortunately, various renewable energies technologies have been developed and used in our daily life, such as hydropower, wind energy, solar energy, geothermal energy, tidal energy, etc. Compared with the solar energy radiated on the earth surface, the amount of all the other renewable sources is less than 1% (Table 1) [6]. The solar energy on the surface of the earth is several thousand times more than that consumed by the human beings every year. For solar energy, the way we currently harness it is usually photovoltaic power generation which mainly makes use of solar panels to capture solar energy. However, this kind of energy is intermittent and highly unpredictable—due to different latitudes, weathers, terrains, etc.—resulting in unstable and discontinuous power source and fluctuation of output power. Moreover, the relative lower conversion efficiency from light to electric energy requires the installation of solar panels in a large scale, which in turn increases the cost. Also, we should take environmental contamination into consideration during the photovoltaic cell manufacturing process. Solar thermal energy is the second way we use solar energy and it is a better technique to overcome the drawbacks of photovoltaic power generation. Solar thermal power systems could collect and store heat using the solar radiation as energy input and release heat to produce electricity by generating high-temperature steam and then driving a turbine or a motor engine [1], satisfying the electricity usage requirement at the case of poor sunlight or at night. In addition, this kind of energy conversion is effective in solving the problem of electricity supply fluctuation in photovoltaic power generation and address the mismatch dispatchability between supply and demand of electricity [1]. More importantly, solar thermal power hardly involves any polluting emissions or environmental safety issues which nuclear-based or conventional power generation technologies struggle with.
Table 1. Power from different renewable sources in the earth [6].
Generally, a solar thermal power system is mainly comprised of a solar thermal energy concentrator, TES unit, and power conversion device. The TES system is one of the most crucial component of solar thermal power systems due to its contribution to the effective storage of thermal energy. In recent years, a great many groups have focused their research on TES which has attracted great attention [1][2][3][4][5][15][16][17][18]. In the current development of TES, researchers concentrate more attention on the low-temperature (<200 °C) heat storage. Thus, few high temperature heat storage systems are investigated. However, it is known that the efficiency of engines can be improved by raising the temperature to a relatively high degree according to the Carnot principle. The high temperature heat storage not only improves the efficiency of TES, but also has a wider application than that of low temperature heat storage. Based on the above statements, it could be concluded that it is essential to develop a kind of high temperature TES system. This high temperature TES system not only contributes to better utilization of solar energy but is also beneficial to high temperature industrial waste recycling [19]. In summary, the TES system could help to serve as follows: (1) conserves energy with renewable energy sources such as solar energy; (2) creates emissions reduction of toxic and greenhouse gases and is environmentally friendly; and (3) adjusts electricity mismatch problem and maintains a stable electric power transmission [1]. Besides, the cost and safety should be also taken into account as important or even decisive issues to the wide application of TES.

For the TES system, there are mainly three potential technologies used to store thermal energy: Sensible storage, latent storage, and chemical storage. In the sensible storage system, the energy density is equal to the product of temperature change by the specific heat of this material. The thermal energy is stored when the temperature of the material increases and released when its temperature decreases. In our daily life, hot water storage, underground thermal energy storage, and rock filled storage are typical applications of sensible heat storage [15]. When a solid/liquid state material transforms into a liquid/gas state, it would absorb energy to overcome the intermolecular force. Under this circumstance, it would release thermal energy during the process of gas/liquid state transforming into liquid/solid state. The thermal energy related to the phase change of material is named latent heat. In the time of absorbing or releasing heat, the temperature of the system would not change and equal to the melting or boiling point. In total, there are more than 150 phase change materials listed by Zalba et al. [16]. Compared with sensible heat, latent heat materials are able to store more than 5–14 times heat due to the much higher phase-transition enthalpy [20]. Nevertheless, both sensible heat and latent heat storage are physical thermal energy storage system, in which thermal energy will fade out as time goes by, and they are not reliable for long-term thermal energy storage. There are many publications studying the TES by sensible and latent heat storage [1][15][16][20][21]. Chemical storage is the technology of storing heat by utilizing reversible chemical reactions [22].

Moreover, we should take the reaction temperature into consideration. In a real application, we would like to set the temperature below a certain number (for instance, 1000 °C), due to some problems related to material and heat insulation [22][28]. When a reversible chemical reaction is at equilibrium state, Equation (2) is equal to zero, ΔG = 0. In this case, T = ΔH/ΔS, in order to guarantee temperature (T) under a certain value, there should be a large entropy change (ΔS) in the condition of high energy density (ΔH) in the reversible reaction. Specifically, the higher entropy changes usually appear in dissociation reaction with gas resulting and with a big difference in molecular number. According to Alefeld [29], the heterogeneous vaporization reaction (such as Equation (3)) is well suited for heat storage. However, the gaseous reaction products considerably increase the volume of the thermal storage system, resulting in a big drop of volumetric energy density of the total system.

M = metal, metal alloy, intermetallic compound.
From Equation (4), in the forward direction, it is a process of heat absorption, in other words, the thermal energy is transformed into chemical energy at the moment of dissociating MHn into M and H2 and completing heat storage. In the reverse reaction, a great many metals, metal alloys, and intermetallic compounds contact with gaseous hydrogen and have a chemical reaction under certain conditions, with heat evolution and realization of the heat recovery process.
In a metal hydride-based heat storage system, the hydrogen liberated from the heat storage process is confined in a closed system, which serves as the non-consumable and could be utilized for a huge number of heat storage cycles. This is completely different from hydrogen storage in metal hydrides, in that case, hydrogen released from metal hydrides is presented in a relatively open system, which needs to be added frequently like fuels and is burnt or reacted into water irreversibly finally.
A diagram of a solar thermal energy storage system based on the metal hydrides is illustrated in Figure 1 [4]. It consists of the solar concentration system, the TES system and the power plant, based on the Rankine cycle. There are two kinds of metal hydride materials working at different temperatures. When the solar radiation is strong enough, the heat concentrated by the solar concentration system drives the power plant and produces electricity. Additionally, the extra heat is absorbed by the high temperature metal hydride and stored in the TES system. During the process of extra heat storage, hydrogen is released into the low temperature metal hydride bed and low temperature heat is released. When the sunlight is not available, the low temperature metal hydride is heated and then hydrogen is liberated into high temperature metal hydride bed. The liberated hydrogen reacts with the materials in the high temperature metal hydride bed and provides high temperature heat to the power plant system. As a result, continuous and stable power output could be realized with the function of TES system by storing and releasing thermal energy. Similarly, an innovation based on metal hydride for efficient thermal energy was developed from Pacific Northwest National Laboratory (PNNL) [33]. In their project, the key findings were concluded as follows. The temperature for power generation was 650 °C, charging time was less than 6 h and volumetric energy density for the whole system was 200 kWh/m3. Importantly, compared to the state-of-the-art molten salts, the energy density was increased by 10 times. Additionally, the operating pressure was as low as 1 bar H2 pressure and performed well in the cycle life tests (60 cycles were accomplished). 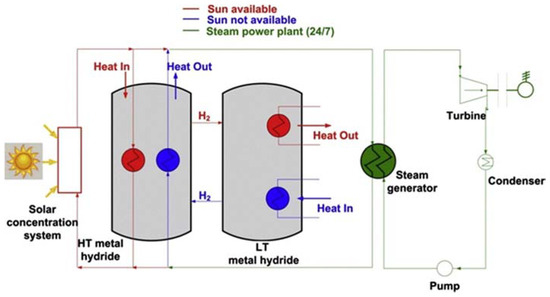 More
© Text is available under the terms and conditions of the Creative Commons Attribution (CC BY) license (http://creativecommons.org/licenses/by/4.0/)
Upload a video for this entry
Information
Subjects: Energy & Fuels
Contributor MDPI registered users' name will be linked to their SciProfiles pages. To register with us, please refer to https://encyclopedia.pub/register :
Liqing He
View Times: 74
Revisions: 2 times (View History)
Update Time: 24 Jun 2021
Table of Contents
1000/1000
Hot Most Recent