Submitted Successfully!
Thank you for your contribution! You can also upload a video entry related to this topic through the link below:
https://encyclopedia.pub/user/video_add?id=11199
Check Note
2000/2000
Evolution of Extracellular Vesicles’ Knowledge
Edit
Upload a video
This entry is adapted from 10.3390/ijms22126417

Extracellular vesicles (EVs) are a family of particles/vesicles present in blood and body fluids, composed of phospholipid bilayers that carry a variety of molecules that can mediate cell communication, modulating crucial cell processes such as homeostasis, induction/dampening of inflammation, and promotion of repair. Since their discovery in 1946, the scientific interest on EVs has increased exponentially promoting promising studies on their possible roles in health and disease.

Extracellular vesicles (EVs) are a family of particles released from the cell that are delimited by a lipid bilayer and cannot replicate, i.e., do not contain a functional nucleus, and can be detected in culture supernatants of different bodily fluids [1][2][3][4][5]. Once considered nothing else than sticky cell debris, they are now recognized as alternative mediators of cell communication, being able to convey a broad range of molecules such as cytokines, inflammatory mediators, and miRNA [1][2][3][4][5][6], crucial in the maintenance of homeostasis, induction/dampening of inflammation, and promotion of repair [1][2][3][4][5][6]. Recognized today as “extracellular vesicles” (EVs), they were initially stratified and nominated based on their size from <100 nm, traditionally named exosomes; 100 to 1000 nm, also recognized as microvesicles, microparticles or ectosomes; and apoptotic bodies when >1000 nm [7], a nomenclature that was eventually modified after the MISEV 18 guidelines.
As shown by the number of publications (Figure 1), there has been an exponential increase in the interest in EVs and their potential applications in understanding the underlying mechanisms of various diseases, such as cancer, cardiovascular, metabolic, neurological, and infectious diseases, among others, which have revealed a role for EVs as promising biomarker candidates for diagnosis, prognosis, and even therapeutic tools, in lung and other diseases [8][9][10][11]. Furthermore, investigations performed with cell cultures of peripheral and epithelial cells from various systems highlight the peculiar release of specific cargoes of these particles when exposed to different triggers, which points to the possibility that EVs might be bioengineered as shuttles of therapeutic drugs, offering an alternative way of drug delivery for disease treatment [9][11]. 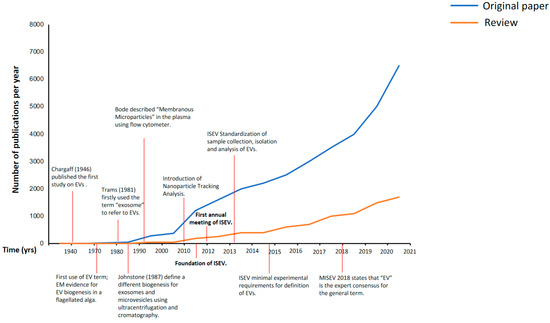 2. Evolution of the EVs Nomenclature: From 1946 to Today

The technological outgrowth started in the 1990s, which introduced new methods facilitating the study of EVs beyond the EM (nanoparticle-tracking analysis, dynamic light scattering, high-resolution flow cytometry), contributing to a progressive expansion of the scientific knowledge and publications on the field (Figure 1 and Figure 2). However, researchers continued to refer to EVs indiscriminately as either exosomes or microvesicles but also as ectosomes, membrane particles, exosome-like vesicles, and apoptotic vesicles [33]. In the period from the late 1990s to the early 2010s, the growth of the curves of the scientific production referred to as “exosomes” or “microvesicles” were completely overlapped (Figure 2), as much as the two terms were in researchers’ minds. 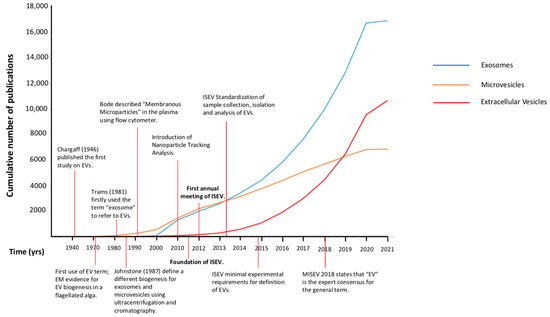 Figure 2. Cumulative number of publications. Comparative evolution of the use of different terms for EVs (exosomes, microvesicles or extracellular vesicles) in the literature from 1946 to 2021. EVs: extracellular vesicles; EM: electron microscopy; ISEV: International Society of Extracellular Vesicles; MISEV: minimal information for studies of extracellular vesicles.
It was Gyorgy et al. [7] in 2011 who, aiming to clarify the confusion created by the heterogeneity of vesicle terminology, suggested that the large number of mobile membrane-limited vesicles contained in the extracellular environment should be termed “extracellular vesicles” and not microparticles, as particle suggest a solid, particulate structure rather than a vesicular one. EVs would include exosomes, activation- or apoptosis-induced microvesicles/microparticles, and apoptotic bodies [7]. They also proposed, to make the terminology unambiguous, to classify EVs into three broad classes based on their biogenesis, secretory components, and size: exosomes, microvesicles, and apoptotic bodies. Exosomes are 50–100 nm EVs of endosomal origin containing certain surface markers including tetraspanins. Microvesicles are larger than exosomes (100–1000 nm) and are derived from the plasma membrane of cells through direct outward budding. They contain membrane components, as do their parent cells. Apoptotic bodies are released from cells that undergo apoptosis and can be 50–5000 nm in diameter. They may contain DNA fragments, noncoding RNAs, and cell organelles [7].
By 2013, Gould and Raposo [39] highlighted how the expanding interest in EVs had also introduced some vexing problems related to their nomenclature and how the proposed generic terms meant different things to different investigators. The term exosome has been used, and still is nowadays, in three different ways: some investigators following the original biogenetic definition (i.e., vesicles that bud into endosomes and are released when the resulting MVBs fuse with the plasma membrane [24][28]); others preferring the original, broad definition (i.e., secreted vesicles that ‘‘may serve a physiologic function’’ [21][40]); and others still employing an empirical definition based on differential centrifugation (i.e., vesicles that sediment only after centrifugation at 70,000–100,000 g [24][41]). A similar range of definitions was evident for the term microvesicle, which some define as vesicles that bud from the plasma membrane [33][42], others define as all secreted vesicles [43], and others still define on the basis of differential centrifugation (i.e., vesicles that sediment at 10,000 g [33][41]).
It is of interest how the term exosome gained popularity among investigators, as evidenced by the increasing number of publications over the years referring to exosomes (Figure 2). Probably the fact that the exosome, along with the MVB, were the EVs most studied and more clearly described attracted its use, even when it might not have been appropriated. The description of MVBs in immune cells and how the resulting exosomes had a function in adaptive immunity gave the exosomes a relevance never reached by “microvesicles” being mere pieces of the cell membrane [44].
Soon after the description of MVBs and their 40 to 80 nm exosomes cargo by Johnstone in 1985 [25], differential centrifugation and ultracentrifugation above 100,000 g was used in order to isolate and differentiate the smallest vesicles, the exosomes, from EVs larger than 100 nm, the microvesicles, and apoptotic bodies [26]. This technique was used broadly, alone or along with EM and other techniques, to study the properties, biological content, and identification markers of these smallest EVs, the exosomes. Extensive literature has revealed how exosomes can be identified by the expression of endosome tetraspanins (CD37, CD53, CD63, CD81, and CD82, among others), which are possibly responsible for cell penetration, invasion and fusion events [45][46]. Furthermore, in 2007 Valadi et al. [47] showed that exosomes obtained from human mast cell line cultures, identified by ultracentrifugation and expression of CD63 by FACS analysis, contained RNA from approximately 1000 genes, many of which were not present in the cytoplasm of the donor cell. Further analysis revealed also the presence of miRNA, which was transferable to other human and mouse cells. However, in addition to exosomes, various other membrane-derived vesicles (~50–4000 nm in diameter) in the circulation were also found to contain miRNA [48].

2.2. The International Society for Extracellular Vesicles (ISEV) 2013: First Attempt to Introduce Some Order into EV Science

As the interest and consequent number of publications on EVs, mainly exosomes (the ‘‘buzz term’’ for EV-related science), increased, by 2013, it was becoming evident that most studies were not clearly defining the origin of EVs under study, neither were they defining the relative contributions of exosomes and of other secreted membrane vesicles in the proposed functions. It was by then clearly recognized that a major ongoing challenge was to establish methods that would allow discrimination between exosomes and microvesicles, as differences in properties such as size, morphology, buoyant density, and protein composition seemed insufficient for a clear distinction. Paradoxically, the increasing interest for the content and function had progressively reduced the relevance for a precise nomenclature in classifying EVs, therefore leading once again to a confusing scientific production. In response to this confusion, in 2013, the International Society for Extracellular Vesicles (ISEV), a group of scientists with collective long-term expertise in the field of EV biology, proposed a series of criteria, based on best current practice, that represented the minimal characterization of EVs that should be reported by investigators. The idea was that adoption of these criteria should aid researchers in planning studies and reporting their results. In addition, the ISEV’s recommendations suggested appropriate controls that should be included in EV-related functional studies [2][3].

More
© Text is available under the terms and conditions of the Creative Commons Attribution (CC BY) license (http://creativecommons.org/licenses/by/4.0/)
Upload a video for this entry
Information
Subjects: Cardiac & Cardiovascular Systems
Contributor MDPI registered users' name will be linked to their SciProfiles pages. To register with us, please refer to https://encyclopedia.pub/register :
mariaenrica tine
View Times: 56
Revisions: 2 times (View History)
Update Time: 24 Jun 2021
Table of Contents
1000/1000
Hot Most Recent