Submitted Successfully!
Thank you for your contribution! You can also upload a video entry related to this topic through the link below:
https://encyclopedia.pub/user/video_add?id=11172
Check Note
2000/2000
Drought/Salt Tolerance in Wheat
Edit
This entry is adapted from 10.3390/ijms22126378

Drought and salinity are major constraints to agriculture. Here, we present an overview of the global situation and the consequences of drought and salt stress connected to climatic changes.

Water and consequently an adequate hydric balance are essential for life, determining crop production in terms of quantity and quality. In the present century, the main crop production problems are related to hydric stress, including dwindling water resources and excessive salinity of irrigation water and soil. Moreover, it is expected that global warming and climate change would increase the frequency of drought events, leading to a severe threat to food security [1][2][3].
In nature, plants are exposed to various abiotic factors and exhibit complex adaptation responses that depend on their degree of plasticity. In addition, they are facing environmental changes that increase the risk factors, such as rainfall distribution, loss of soil fertility and organic carbon, fluctuation in temperature and light, evaporative intensity, biological stresses, increasing pollution, and declining biodiversity [4]. Water is the most critical factor for the growth and development of living organisms, determining 82% of the variation in grain yield in areas receiving less than 400 mm of annual rainfall [5]. Land plants are anchored in the soil and rely on their root system to ensure water availability and nutrient uptake. About 30% of the Earth’s land is arid or semi-arid, and this percentage is expected to increase due to climate change [6]. The prevision indicates an erratic rainfall distribution, an overall decrease in total annual rainfall, and a more pronounced occurrence of dry periods [7], in addition to an increase in temperatures with a consequent reduction in ecosystem health through species extinction or a reduction in biodiversity, due to migration and changes in behavioral patterns [8].
Among all stresses, drought and salinity (soil and water) are the main abiotic factors that reduce a crop’s productivity, causing the most damage for grain production all over the world [9]. Other than grain production, water scarcity also affects the growth rate, leaf size, stem extension, root proliferation, susceptibility to disease, plant color, etc. [10][11]. Particularly in conventional farming, the rainfall water effectively decreases due to increased surface runoff, soil evaporation through unplanted and bare soil surfaces, and evaporation caused by the aeration of soil during intensive tillage [3]. Factors such as rainfall intensity, duration, exact time of rain events, and the soil properties affect the soil moisture status, especially the plant-available water (PAW), which can differ significantly with the same total amount of precipitation under different conditions. In addition, the water availability for plants decreases due to the high soluble salt concentrations in the soil, which causes absorption difficulties; i.e., water deficit or hydric stress. The main causes of soil salinization can be classified as natural or caused by human activity, named primary and secondary salinization, respectively (Figure 1) [12].

Figure 1. Primary and secondary soil salinity mechanisms (Reprinted with permission from ref. [12]. 2016, Elsevier).
Current estimations indicate that salt issues affect about 20% of global lands and almost 40% of irrigated lands. This phenomenon is increasing and 50% of total cultivated land worldwide will be salinized by 2050 [13][14][15]. Global warming is the increase in temperatures often associated with rainfall decrease, leading to more extreme and unpredictable events. As a conclusion, the need to have a system protecting agriculture from an erratic climate becomes important worldwide.
The global grain production is an important indicator of food security, but unfortunately it grows slower than the human population. This unfavorable situation is exacerbated by abiotic factors such as drought, high salinity, extreme temperatures, flooding, and heavy metals [16][17]. There is an urgent need to increase food, which cannot be done by simply raising the agricultural lands, which causes deforestation and consequently climate change problem. Increasing the production per unit area (i.e., yields) represents a potential solution. Yields can be improved by using genetics methods, appropriate crop rotation, adequate fertilization, and early planting. For example, a six-week delay in planting time resulted in yield reductions of about 42% in barley and 22–32% in wheat [18]. While, early planting, proper fertilization, and appropriate crop rotation were found to increase the water-use efficiency (WUE) [19].
Useful and adequate breeding programs, addressed to reduce crop yield lost under stress conditions, are necessary to face the consequences of climate change. Attention should be focused on the drought-related traits, which include leaf canopy temperature, cell osmotic adjustment, cell membrane stability, leaf water potential, stomatal resistance, leaf rolling index, and leaf waxiness [18]. In wheat, for example, the total aboveground part of the plant (biological yield) in a water-limited production area is directly related to the water supply [20]. Although biological yield offers little hope of modification through breeding, the harvest index, which reflects the ratio of grain to total biological yield, appears to be amenable to genetic improvement for enhanced drought tolerance.

Significant differences in drought and salinity stresses were reported between plant species [21]. Their growth rates were highly different under stress, indicating that germplasm is the main reserve of useful genes that could be used to improve cultivated crops. Figure 2 shows the differences in salt sensitivity among some plant species. Tall wheat grass (Thinopyrum ponticum (Podp.) Z.-W. Liu and R.-C. Wang; (synonymous Agropyron elongatum (Host) P. Beauv.) and saltbush (Atriplex anicola Paul G. Wilson) are extremely tolerant to salinity. Arabidopsis thaliana (L.) is more sensitive to salinity while alfalfa (Medicago sativa L.) is much more tolerant, compared to cereals. Among the cereals, rice (Oryza sativa L.) is the most sensitive while barley (Hordeum vulgare L.) is the most tolerant. Within the intermediate tolerant species, durum wheat (Triticum turgidum subsp. durum (Desf.) Husn) is more sensitive than bread wheat (Triticum aestivum L.) [21]. 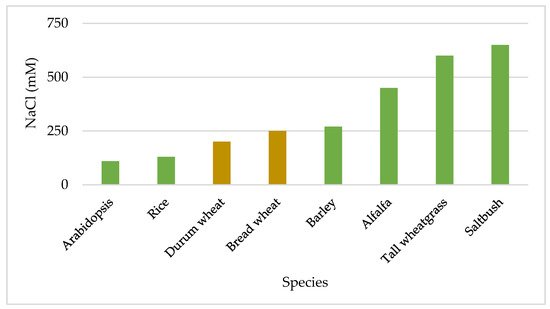 When plants suffer from hydric stress, significant changes in their morphology can be observed. Usually, hydric stresses affect plant size, which becomes smaller due to a decreasing number of leaves and decreasing area. However, the roots are lengthened searching for water, which results in an increase in the root-to-shoot ratio. This adverse effect of water scarcity on crop plants causes fresh and dry biomass losses. Early maturity or early flowering is another adaptation strategy where a shorter vegetative phase in wheat can help to avoid stress in further very sensitive flowering and post-anthesis grain filling stages [22].
Drought induces a plethora of negative physiological alterations, such as cell turgor loss, reduction in CO2 assimilation, oxidative stress, and nutritional imbalance [23]. Nutritional imbalances due to drought stress occur by decreasing the water uptake and leaf transpiration, combined with alterations in nutrient uptake. Plants try to counteract these effects by activating drought resistance mechanisms, such as accumulation of salts and water, to improve the cell osmotic adjustment and stomata function. K+ and Cl− ion regulation, as well water transport, have been important mechanism for plants under drought. K+ and Cl− are involved in leaf cells osmotic adjustment, with the consequent water retention in cells; stomatal closure prevents water loss [24]. The presence of high ionic concentrations in soil, especially NaCl, is a great challenge for the plant’s physiology. To balance the high sodium concentrations in the soil, plants cells must maintain high concentration of potassium and low concentration of sodium inside the cells.
The root system has been studied less than the aboveground morphology. During the juvenile phases, the root architecture is plastic and can adapt to several environmental conditions. It has been detected that roots can escape a high salinity zone, moving to less salty soil. Galvan-Ampudia et al. [25] identified halotropism as the plant’s possibility to reduce their exposure to salinity by moving their root system to an adequate saline environment. The auxin distribution in the root tip affects the root response to salty environments, as summarized in Figure 3 [25]. Furthermore, changes in the PIN subcellular localization affect root auxin transport and can cause various deformities in root architecture, including the size, less lateral roots, root meristem collapse, and others [26]. 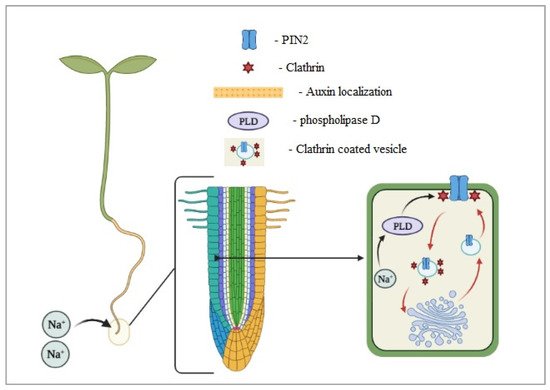 Figure 3. Salt-activated phospholipase D (PLD) induces clathrin-mediated endocytosis of PIN2, which allows reorganizing the auxin and roots’ growing direction (modified from Galvan-Ampudia et al. [25]).
Salinity inhibits the root length and reduces the number of roots, but also influences the root growth direction. Sun et al. [27] found that the root direction could change with NaCl increasing; the curved roots could be visible already with a concentration of 100 mM of NaCl in the media. Salt stress reduces gravitropism of root growth, altering the PIN-FORMED2 (PIN2) protein abundance and polar distribution and overly salt-sensitive (sos1 and sos2) genes. Julkowska et al. [28] found that more than 100 genetic loci activated under salt stress are associated with root system architecture changes. Among these, CYP79B2 is correlated with lateral root development under salt stress while HKT1 reduce the lateral root development.

Since plants cannot easily change habitats where conditions are more favorable, to survive and multiply, they evolutionarily adapted, gaining plasticity and specific responses. Generally, plant reactions to abiotic factors include morphological, physiological, biochemical responses, and various adaptation scenarios. In addition, a plant’s response can be either common to many kinds of stresses or specific to each one. Stress-tolerance mechanisms are divided in two macro groups: mechanisms involved in osmotic-stress tolerance and mechanisms involved in ion-stress tolerance [29]. The stomatal adjustment belongs to the first class of mechanisms. Plants under drought and osmotic stresses in non-irrigated systems tend to close their stomata to minimize transpiration, which is reflected in a reduction in growth and production. Exclusion and compartmentalization of toxic ions, avoiding their high concentration in plant cells, are mechanisms of ion-stress tolerance [21]. Each type of physical stress is translated by the plant into a biochemical response, and then into a pathway of interconnected signals with the expression of specific genes that are involved in the stress-tolerance mechanisms. Table 1 lists some of the genes that are candidates for the pathway process and their defense mechanisms for osmotic and ion stresses [21].
Table 1. Plant salinity-tolerance mechanisms, ordered by processes and their relevance for the three components of salinity tolerance [21].

More
© Text is available under the terms and conditions of the Creative Commons Attribution (CC BY) license (http://creativecommons.org/licenses/by/4.0/)
Upload a video for this entry
Information
Subjects: Plant Sciences
Contributors MDPI registered users' name will be linked to their SciProfiles pages. To register with us, please refer to https://encyclopedia.pub/register :
Mario A. Pagnotta
,
Ieva Urbanavičiūtė
,
Luca Bonfiglioli
View Times: 84
Revisions: 2 times (View History)
Update Time: 23 Jun 2021
Table of Contents
1000/1000
Hot Most Recent