Submitted Successfully!
Thank you for your contribution! You can also upload a video entry related to this topic through the link below:
https://encyclopedia.pub/user/video_add?id=11116
Check Note
2000/2000
Gastric Polyps and Gastric Cancer
Edit
Upload a video
This entry is adapted from 10.3390/ijms22126548

Gastric cancer is still an important disease causing many deaths worldwide, although there has been a marked reduction in prevalence during the last few decades. The decline in gastric cancer prevalence is due to a reduction in Helicobacter pylori infection which has occurred for at least 50 years. The most probable mechanism for the carcinogenic effect of H. pylori is hypergastrinemia since H. pylori infected individuals do not have increased risk of gastric cancer before the development of oxyntic atrophy. When atrophy has developed, the carcinogenic process continues independent of H. pylori. Autoimmune gastritis also induces oxyntic atrophy leading to marked hypergastrinemia and development of ECL cell neoplasia as well as adenocarcinoma. Similarly, long-term treatment with efficient inhibitors of acid secretion like the proton pump inhibitors (PPIs) predisposes to ECL cell neoplasia of a different degree of malignancy. Contrasting the colon where most cancers develop from polyps, most polyps in the stomach have a low malignant potential. Nevertheless, gastric polyps may also give rise to cancer and have some risk factors and mechanisms in common with gastric cancer.

The prevalence of gastric cancer has had a marked reduction during the last decades. However, it is still an important disease, globally being the third cause of cancer death [1]. It is also an interesting disease in that a bacterium, Helicobacter pylori (H. pylori), is the dominating cause [2]. It is remarkable that we know the main etiology of an important cancer. However, the mechanism by which H. pylori causes gastric cancer is still debated, which to some extent hampers a rational prophylaxis. 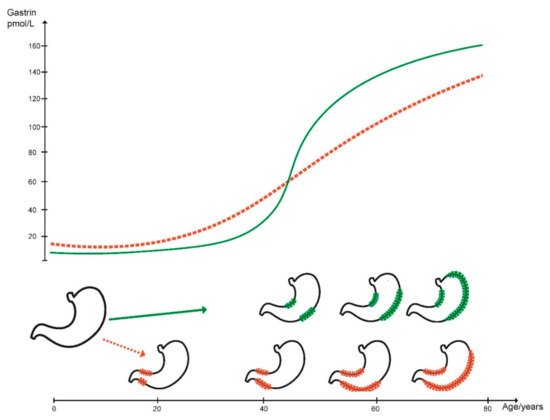 Gastric polyps are lesions protruding into the lumen and are increasingly found at gastroscopy, in Western populations in more than 6% of patients [78][79]. Polyps may develop in all parts of the stomach, have a heterogeneous origin from different cells and tissues, and the different subtypes have a highly variable prevalence.

Hyperplastic polyps (HPs) are prevalent and develop in association with gastritis and gastric atrophy [80][81] or may develop in response to injury that stimulates regeneration and proliferation. The histological appearance of hyperplastic polyps overlaps with polyps that have previously been characterised as inflammatory, the latter term now considered a misnomer [82]. HPs are most often single and may be found in all parts of the stomach. Previously, HPs were most often found as single polyps in the antrum, whereas there has been described a shift towards a more proximal location for HPs as well as for other gastric polyps [83]. Sporadic hyperplastic polyps cannot be distinguished morphologically from polyps occurring in syndromes with hyperplastic polyposis [78]. The sporadic HPs are associated with gastritis and atrophy, the same conditions being central in gastric carcinogenesis discussed above. Hyperplastic polyps have repeatedly been found to regress after H. pylori eradication, demonstrating the causal role of H. pylori [84]. There is an increased risk of gastric neoplasia in patients with HPs [85]. The mechanism by which HPs develop through presumed proliferation of the foveolar surface mucosa is not known, but since they are localised, there must be a local change in the growth regulation or a mutation in the cell of origin affecting the proliferation rate. HPs also develop in the cardia [86] of patients with gastroesophageal reflux disease (GERD). Hypertrophic gastropathy in Ménétriers disease, a condition of uncertain etiology, but with increased risk of gastric cancer development, may also contain elements that mimic HPs [87].

Adenomas are precursors of gastric adenocarcinomas and frequently arise on a background of atrophic gastritis. The risk of malignancy is associated with size [88] as well as histological subtype. The gastric adenomas are subclassified based upon morphology [78], where adenomas of intestinal type and fundic gland type have a higher risk of progression to carcinoma than foveolar and oxyntic gland adenomas [53]. Foveolar type adenomas are most often solitary, small and they seldom develop into malignancy. The intestinal type adenomas, which are recognised by specific intestinal cells like goblet and Paneth cells, generally develop in a mucosa with atrophic gastritis whether due to H. pylori or autoimmune gastritis, and they have a malignant potential. H. pylori may play a role in progression of adenomas to adenocarcinomas of intestinal type as eradication of H. pylori is associated with lower risk of gastric cancer during follow-up [88]. The mutations found in gastric adenomas vary, but many are also found in gastric cancers, including kras and beta-catenin [89]. As for hyperplastic polyps there is an association between gastric adenomas and synchronous as well as metachronous adenocarcinomas. This has been reflected in clinical practice guidelines with recommendations of H. pylori eradication, thorough inspection of the non-polypoid mucosa and follow-up endoscopies after resection of the adenoma [71]. Patients with gastric adenomas have higher gastrin levels [90], which may be explained by the close relationship with atrophic gastritis in the surrounding mucosa. It has not been shown that PPI treatment predisposes to development of gastric adenomatous polyps.

Fundic gland polyps (FGPs) are the most prevalent type of gastric polyps in recent studies of Western populations [78] and have been found in up to 5% of patients undergoing upper endoscopy [79]. FGPs may occur in patients with familial adenomatous polyposis (FAP) or be so-called sporadic. Histologically there is no difference between FGPs being part of FAP or the sporadic ones [91]. Although FGPs generally are regarded as benign lesions, proliferative cells are observed at the base not only in the proliferative area, but also in epithelium lining the cysts [91]. Moreover, gastric cancer may develop from FGP in patients with FAP [92], and high-grade dysplasia has been reported even in sporadic FGPs [93]. Most sporadic FGPs have beta-catenin mutations [94] but very rarely contain dysplasia, whereas FGPs in patients with FAP contain an APC-mutation and dysplastic FGPs often contain a second hit APC mutation, but no beta-catenin mutation, which is believed to cause dysplasia and a risk of adenocarcinoma development. These frequently found mutations in the Wnt-pathway indicate that all FGPs should be considered neoplastic polyps [78]. In a large study population the patient age was lower and the incidence higher for development of dysplasia in FGPs in patients with FAP than in patients with sporadic FGPs [95]. Patients with FAP seem to have an increased risk of gastric adenocarcinoma [96][97], which may previously have been underestimated in Western populations [98], whereas the risk may be 2–4 times higher [96] in Asian patients. Patients with gastric adenocarcinoma and proximal polyposis of the stomach (GAPPS) have fundic gland polyposis [99][100]. This syndrome is considered a variant of FAP as patients have a mutation in the non-coding part of the APC gene that predisposes to this particular phenotype. The proximal stomach may be carpeted with polyps and distinct protruding FGPs are common [101]. Of concern is a description of a recent increase in the prevalence of gastric cancer in patients with FGPs connected to FAP [97]. In a large study Genta et al. found no association between occurrence of sporadic FGPs and gastrointestinal malignancies [102]. However, such an association to gastric cancer might have been missed since the prevalence of H. pylori was significantly reduced in those with FGPs. In fact, Helicobacter pylori infection has a strong negative association with occurrence of sporadic FGPs, and FGPs hardly develop in H. pylori infected individuals [103]. In general, dysplasia in FGPs may not be so seldom as previously thought [104]. Interestingly, PPI treatment induces FGPs [105][106] in a time and dose-dependent manner [105][107], whereas H. pylori infection protects against development of FGPs [105][108]. Although PPI treatment may cause hypergastrinemia, the induction of FGPs by PPI is not associated with the degree of hypergastrinemia [105]. The mechanism by which PPIs induce FGPs is not known, but may be related to stagnation of fluid in the oxyntic glands causing cystic dilations [109]. Anyhow, PPI induced FGPs disappear when stopping treatment [110][111], for instance after anti-reflux surgery [112]. FGPs due to PPI treatment were reported to have higher percentage of proliferating cells assessed by Ki67 than other sporadic FGPs [113]. Similarly, three FGPs that were developed after 8 years of PPI therapy showed low grade dysplasia and in one adenocarcinoma [114]. We have also described a tumour growing as polyp localised to a hiatus hernia that was diagnosed after about 15 years of PPI treatment due to gastrointestinal reflux and histologically was classified as a neuroendocrine carcinoma [42]. Anyhow, the risk of gastric cancer in sporadic fundic gland polyps is low and the value of endoscopic polypectomy and follow-up is uncertain. However, in patients with large or multiple polyps, the indication for PPI use should be re-evaluated and PPI therapy stopped or reduced. Endoscopic resection of the largest polyps to confirm the diagnosis and a follow-up may be justified.

The presence of gastric polyps in patients with liver cirrhosis with portal hypertension has been known for some time, and in 2016 they were described as a new entity [115]. These polyps are of hyperplastic type, but they may be suspected from macroscopical appearance with reddish sausage like folds with prominent capillaries on the surface [116]. Such polyps are actually not so rare as in a large series they were found in one third of patients with cirrhosis [117]. Polyps related to portal hypertension may be so large that they may cause obstruction [118]. Moreover, polyps related to portal hypertension may be induced by PPI treatment as the polyps in such a patient disappeared after stopping treatment [116]. It is probable that patients with liver cirrhosis are more susceptible to PPI side effects including hypergastrinemia due to reduced drug metabolism [119].

In contrast to the colon where cancers most often develop from polyps, gastric polyps are relatively less important as precursor lesions of gastric cancer. However, gastritis leading to oxyntic atrophy is central in gastric carcinogenesis and hyperplastic polyps and adenomas often develop in atrophic mucosa. Since hypergastrinemia, whether due to oxyntic atrophy or hypoacidity caused by proton pump missense mutation or prolonged use of PPI, predisposes to gastric malignancy, hypergastrinemia seems to be the carcinogenic factor in common. Hypergastrinemia is associated with hyperplastic polyps as well as adenomas, whereas its role in fundic gland polyps is uncertain. The inflammation per se causing the oxyntic atrophy in the initial phase in H. pylori gastritis, seems to have no further role in the carcinogenesis. In any way, to eradicate the major cause of gastric cancer, H. pylori, at young age and reduce long-term use of efficient inhibitors of gastric acid secretion, will probably lead to a marked reduction in the prevalence of gastric cancer.

More
© Text is available under the terms and conditions of the Creative Commons Attribution (CC BY) license (http://creativecommons.org/licenses/by/4.0/)
Upload a video for this entry
Information
Subjects: Gastroenterology & Hepatology
Contributor MDPI registered users' name will be linked to their SciProfiles pages. To register with us, please refer to https://encyclopedia.pub/register :
Helge Waldum
View Times: 68
Revisions: 2 times (View History)
Update Time: 22 Jun 2021
Table of Contents
1000/1000
Hot Most Recent