Submitted Successfully!
Thank you for your contribution! You can also upload a video entry related to this topic through the link below:
https://encyclopedia.pub/user/video_add?id=1101
Check Note
2000/2000
Forest Fire Protection
Edit
Upload a video
This entry is adapted from 10.3390/f11060614

The entry presents some significant issues related to the fire protection infrastructure in forests. In every forest complex a sufficiently dense network of fire roads is an extremely important element of the fire protection system. The requirements to identify roads as fire roads within the forest communication network and to maintain their condition up to a certain technical standard has been briefly explained.

At present, the forested area in Poland exceeds 9.2 million ha and is steadily increasing, from 21% of the country’s land area in 1945 to 29.6% currently [1]. The vast majority of forests are state-owned, of which over 7.3 million ha are administered by the State Forests—National Forest Holding (in short: State Forests). The State Forests’ core activity is sustainable forest management. The areas administered by the State Forests are accessible and forest products, such as berries and mushrooms, may be freely picked there. The State Forests represent the State Treasury of Poland and act on its behalf in property management. The organization also controls timber harvesting in private forests. The State Forests closely cooperate with research institutions both in the field of environmental protection and forest management. Especially in the current climate conditions characterized by long periods of rainfall shortage and, on the other hand, extreme weather events (torrential rainfall, storms), often with catastrophic effects (floods, fires, landslides), cooperation between forest management professionals and scientific communities is extremely important [2][3][4][5][6][7][8][9][10][11]. Such joint work enables the active seeking for practical ways to prevent negative climatic phenomena and to contribute to the mitigation of their effects.

In the field of forest engineering, the primary research directions inherent in preventing and mitigating the impacts of adverse climatic and weather conditions on the forest environment currently conducted for the State Forests are related to forest firefighting infrastructure (fire roads, forest landing fields, water intake points), water management in forests and eco-engineering.

Forest engineering methods are important elements of the forest environment support system; they are necessary for adapting forest road networks for fire-fighting purposes, planning and building infrastructure to reduce water outflow, increasing water retention in forests, and developing infrastructure that prevents the fragmentation of forest habitats and ecosystems. The article presents some significant research achievements enabling the protection of the forest environment and sustainable management of Polish forests in conditions of prolonged drought observed in Poland. The effects of a number of works on specific problems affecting selected regions of the country were shortly described; the locations of the presented projects are shown in Figure 1. 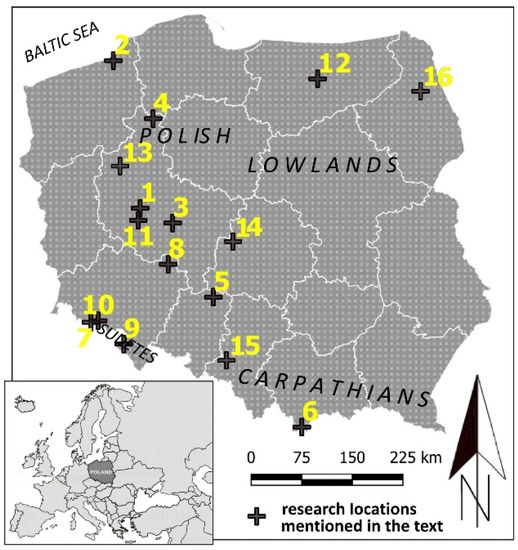 Forest fire protection is particularly important in the era of growing forest fire hazard as a consequence of the observed climate change. The forest fire protection system in Poland is complex and covers a number of activities: fire prevention, creation and maintenance of a surveillance and alarming system, specifying and implementing the organizational and technical measures enabling efficient access to the fire place and actions of  the fire extinguishing forces. In Poland, forest fire protection depends on the category and degree of forest fire risk. The fire hazard category comprises forests with a similar level of susceptibility to fire, determined on the basis of the frequency of fires, climatic conditions, stand condition and anthropogenic factors. The degree of forest fire risk is determined for areas of the I and II fire hazard categories; it is carried out twice a day according to separate forecasting zones. One of the elements of improving the fire protection system in Polish forests is currently the optimization of forest communication network density and improving the load capacity parameters of forest roads acting as fire access roads.

One of the most tragic but also spectacular experiences confirming the great importance of forest road network for firefighting was the fire in the Rudy Raciborskie Forest District in 1992—the largest fire which has taken place in Poland and then in Central Europe since World War II. The fire lasted from 26 to 30 August and destroyed 9062 ha of forest area [12]. Currently, organizational units of the State Forests—National Forest Holding work on spatial optimization of road systems, also including their number, based on specially prepared forest road plans. As a result, forest districts are provided with a body of information to facilitate future operations. The main objective of these forest road plans is to precede investment processes with assessment of their economic rationale manifested, among other things, in planned management and protection operations. The road network is optimized by establishing the course of required roads, i.e., trunk roads, byways, access roads for machines, as well as matching maintenance and rehabilitation technologies adequate to the needs.

An extremely important element of the fire protection infrastructure in every forest complex is a sufficiently dense network of fire roads. The requirement to identify roads as fire roads within the forest road network and to maintain their condition up to a certain technical standard was introduced in the State Forests organizational units by the “Instruction on fire protection in forested areas” of 1996 and 2020 [13][14]. The information and requirements included in the instruction resulted, among others, from research carried out by the authors of the current paper. It was established that the distance between any point located in the forest and the nearest public road (excluding highways and express roads) or a forest road classified as a fire road should not exceed 0.75 or 1.50 km depending on the adopted fire hazard category for a given forest (Figure 2) [15][14][16][17]. Fire roads also serve the function of the primary grid for the transportation network necessary to carry out all tasks in a given forest complex. According to data from 2015, within the area administered by the State Forests there are almost 107,000 km of forest roads, of which as much as 47% serve the function of fire roads [18][19]. Transport problems observed in Polish forests resulted not from a lack of roads, since their density indexes were relatively high and comparable with those of other European countries, but rather from the very low percentage of paved roads [18][19]. This has facilitated a considerable investment on the forest road infrastructure being made in the following years.

Figure 2. Assessment of potential fire hazard in Polish forests according to forest district (I, II, III—categories of forest fire hazard, as of 31 December 2018).

At present, research in the Department of Forest Engineering focuses on the verification of current regulations of public law and specific professional guidelines concerning fire roads in relation to the requirements to be met for currently used firefighting and rescue vehicles of fire brigades, as well as applied tactics and technologies of forest firefighting [20][21]. These refer in particular to: 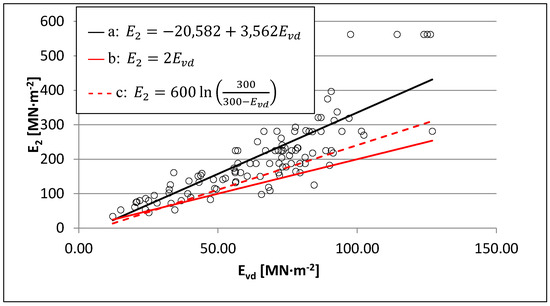 Figure 4. Estimation of the static constrained modulus during secondary compression (E2) based on values of dynamic constrained modulus (Evd) according to: (a) the original model of linear regression (proposed in [20]); (b) simplified conversion of Evd into E2 occasionally applied in practice; (c) the formula admissible in case of no data on other dependencies between Evd and E2 [24], in view of measurements of load-bearing capacity taken using a static plate on 109 different types of fire road surfaces [20].

The functioning of the fire protection system in Polish forests may be considered highly effective. The mean area affected by a single fire in Poland is relatively small and shows a downward trend [23]. The mean area of a single fire in forests administered by the State Forests, covering the main organizational and financial burden of fire protection in Polish forests, is almost twice as small as in private forests [25]. In relation to climate change affecting Poland, it is necessary to intensify actions minimizing fire hazard in forests.

More
© Text is available under the terms and conditions of the Creative Commons Attribution (CC BY) license; additional terms may apply. By using this site, you agree to the Terms and Conditions and Privacy Policy.
Upload a video for this entry
Information
Subjects: Forestry
Contributors MDPI registered users' name will be linked to their SciProfiles pages. To register with us, please refer to https://encyclopedia.pub/register :
Ewa E. Kurowska
,
Sylwester Grajewski
,
Andrzej Czerniak
View Times: 311
Revisions: 5 times (View History)
Update Time: 09 Nov 2020
Table of Contents
1000/1000
Hot Most Recent