Submitted Successfully!
Thank you for your contribution! You can also upload a video entry related to this topic through the link below:
https://encyclopedia.pub/user/video_add?id=11004
Check Note
2000/2000
Homocysteine
Edit
Upload a video
This entry is adapted from 10.3390/ijms22042051

Homocysteine (Hcy) is a sulfur-containing amino acid generated during methionine metabolism, accumulation of which may be caused by genetic defects or the deficit of vitamin B12 and folate.

Hcy is a sulfur-containing intermediary amino acid [1], recycled via the remethylation pathway or converted into cysteine via the trans-sulfuration pathway [2].
The methionine synthesis occurs when there is a reduction of 5,10-methylenetetrahydrofolate to 5-methyltetrahydrofolate (5-methylTHF) [3][4][5]. In remethylation, Hcy acquires a methyl group from N-5-methyltetrahydrofolate or from betaine to form methionine. The reaction with N-5-methyltetrahydrofolate occurs in all tissues and is vitamin B12-dependent. In particular, methionine adenosyltransferase (MAT) catalyzes S-adenosylmethionine (AdoMet) (SAM), actively consuming Adenosyn triphosphate (ATP) [3][4]. SAM is the methyl group donor in numerous methylation reactions, a fundamental process for the protein, phospholipid, and biogenic amines synthesis [6][7][8][9][10][11]. Every reaction made by methyltransferases produces S-adenosylhomocysteine (AdoHcy) (SAH) [12][13][14][15]. The SAM to SAH ratio defines the cell’s methylation potential [16][17][18][19][20][21][22][23][24][25].
In the trans-sulfuration pathway, Hcy condenses with serine to form cystathionine. It is an irreversible reaction catalyzed by the pyridoxal-50-phosphate (PLP)-containing enzyme, cystathionine β-synthase. Cystathionine is hydrolyzed by a second PLP-containing enzyme, γ-cystathionase, to form cysteine and α-ketobutyrate [14]. Excess cysteine is oxidized to taurine or inorganic sulfates or is excreted in the urine [14]. Therefore, the trans-sulfuration pathway catabolizes excess homocysteine, which is not required for methyl transfer [14][21][22][23][24][25].
The intrinsic capacity to differentiate between the remethylation and trans-sulfuration pathways to adapt to different intake-methionine levels in the diet strongly implies the existence of a coordinate regulation between these two pathways [14]. SAM could act as an allosteric inhibitor of methylenetetrahydrofolate reductase (MTHFR). It could also play a role as an activator of cystathionine β-synthase, promoting the trans-sulfuration pathway (cystathionine synthesis) [14]. When the methionine supply is low, there is an elevated rate of N-5-methyltetrahydrofolate production. Thus, remethylation will be favored over trans-sulfuration because the concentration of SAM is too low to activate the cystathionine β-synthase enzyme [14]. Remethylation of Hcy to methionine (the methionine cycle) predominates over the catabolic degradation of Hcy (trans-sulfuration) because of the order of magnitude difference in Km between MS and CBS [25][26][27][28][29][30].
The methylation reactions are necessary for the brain, SAM being the sole methyl group donor in numerous methylation reactions involving proteins, phospholipids, and biogenic amines, and packaging many phospholipids, i.e., polyunsaturated phosphatidylcholines (PC).
Hyper-homocysteinemia (HHcy) is defined as levels > 15 mol/L, levels between 15 and 30 are considered moderate HHcy, levels at 30–100 micro-mol/L are considered intermediate/severe HHCy, and levels above 100 micro-mol/L are considered as severe (often fatal) HHcy [26][27]. Hcy levels are inversely related to food supplements, principally folate and vitamin B12 [28][29][30], and directly related to smoking, alcohol, physical apathy [31][32], and aging [33]. In vitro studies that explored the correlation between Hcy and inflammation, neurodegeneration, atherosclerosis, and oxidative damage have been inconclusive. Similarly, in vivo trials failed to demonstrate a real benefit in clinical conditions when Hcy is abated by vitamin B12 or B9 supplementation [34].
Genetic causes of severe HHcy linked to a deficiency of CBS or other alterations of remethylation and trans-sulfuration pathways have been reported in neural tube defects and blood–brain barrier alterations [35][36][37][38][39]. Clinical and experimental works demonstrate that HHcy decreases the cell’s methylation potential, modifying the SAM/SAH ratio [40][41][42], and this is the primary determinant for a generalized DNA hypomethylation associated with an excess of oxidative stress [14][40].
Homocysteine accumulation could interfere with endothelium dysregulation, favor oxidative damage, and promote neuroinflammation and neurodegenerative processes [33][41][42][43][44][45]. All these processes occur in SVD; nevertheless, few studies directly focus on HHcy and SVD. Our review attempts to shed some light on the three principal mechanisms of HHcy-induced damage, trying to focus on SVD (Figure 1). 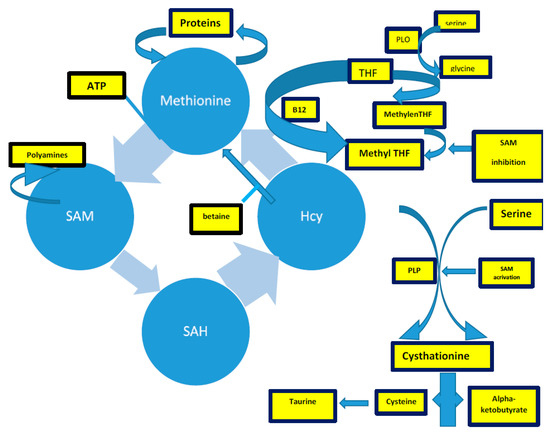 HHcy is linked to neurodegeneration, starting from the well-known relationship between its elevation during aging. Many in vivo and in vitro studies showed that HHcy favors the Abeta1–40 deposition in AD [44], mediated by an Hcy-induced upregulation of the Endoplasmic Reticulum Protein (HERP). HERP favors the c-secretase enzyme activity and the consequent increment of the intra- and extra-cellular accumulation of Abeta1–40 and Abeta 42 [45][46][47][48].
Hcy is strongly related to neurodegenerative/neuroinflammation conditions by the homocysteinylation process. Homocysteinylation leads to protein damage, i.e., protein denaturation, enzyme inactivation, inflammatory activities, and amyloid-oligomers deposition [49][50][51][52][53][54][55]. Under normal metabolic conditions, the cellular synthesis of Hcy thiolactone is rather low because intracellular concentrations of Hcy are relatively low [56]. If Hcy levels are increased because of a reduction in transmethylation and/or trans-sulfuration, Hcy thiolactone synthesis is enhanced—it could be as much as 60% of the metabolized Hcy [56]. Hcy can be linked to a protein via an isopeptide bond to lysine (Lys) residues (N-Hcy-protein) [57][58][59] or via a disulfide bond to Cys residues (S-Hcy-protein) [60][61][62][63]. N-homocysteinylation is an emerging post-translational protein modification that impairs or alters the protein’s structure/function and causes protein damage [64]. There are two limiting processes of the N-homocysteinylation: the quantity of cyclic Hcy-thiolactone (dependent on HHcy) and the number of lysine residues encountered [65][66][67]. The most evident result of the general homocysteinylation process is protein aggregation and virtual protein misfolding. Thus, Hcy-thiolactone induces apoptosis directly in endothelial cell cultures in in vitro and in vivo models [65].
Hcy is also linked to neurodegenerative pathology by influencing tau phosphorylation. As previously described [2][68], tau protein has many functions: the correct assembly of microtubules, directing, therefore, the axonal micronutrients transport toward the neuronal soma. The active form of tau needs constant dephosphorylation mediated by methyltransferase systems (the so-called PPM1 and PPM2A), and the methylation occurs through SAM-dependent reactions [69][70][71][72][73]. Tau hyperphosphorylation has two direct consequences: (1) the disaggregation of microtubules, which leads to an inhibition of axonal transport, and (2) a neuronal death, together with a deposition of damaged microtubules, which forms the so-called tau depositions, or neurofibrillary tangles [74][75][76]. These phenomena have always been associated with degenerative conditions (AD, frontal Pick complex, etc.), but they have also been demonstrated in neuroblastoma cultured cells when the culture medium is depleted by folate, and an increase of P-tau by 66% occurs [77].
HHcy has an intrinsic toxic property [2][68][78] as it acts as an agonist of NMDA (N-methyl D-Aspartate) receptors [79][80][81][82] depending on glycine concentration. Hcy acts as a partial antagonist of the NMDA receptors [2][32][41][78][79], but when the glycine concentration is increased (like in the brain ischemia, in vasospasms, i.e., in prolonged migraine aura attack), even low doses of Hcy could act as an agonist of NMDA channels [83][84], inducing an enhancement of calcium flows [84]. HHCy promotes an extracellular signal-regulated kinase activity in the hippocampus, regulated or blocked by three glutamate receptor antagonists (NMDA, not-NMDA, and metabotropic receptors) [24][85]. It has been suggested that Hcy could directly activate group I metabotropic glutamate receptors, favoring calcium influx currents [83].
Collectively, HHcy exerts essential alteration in the SVD pattern. HHcy induces an increase of Abeta 1–40 toxicity on the smooth muscle cells of the brain’s small arteries, where cerebral amyloid depositions occur, transforming the event into cerebral amyloid angiopathy (CAA), a constant finding in overt SVD condition [2][68][86][87][88]. Moreover, the HHcy condition enhances the m-RNA (Messanger-RNA) production of the C-reactive protein (CRP), over-expressing the NR1 subunit of NMDA receptor expression [2][89]. HHcy enhances the signal pathway cascade, mediated by CRP hyperproduction, mediated by NMDA-ROS-erk1/2/p38-NFK-Beta (NFK = Nuclear Kappa Factor-Beta), which occurs in the smooth muscle cells’ brain small arteries [89]. Homocysteinilation promotes apoptosis [65], endothelium alterations, protein misfolding, and protein aggregation. In fact, the multiple lysine-rich proteins are fibrinogen [66][90], high-density lipoprotein [91], lysine oxidase [92], and cytochrome c [67], and all of them homocysteinylate, aggregate [65], and lead to a general pro-thrombotic condition [66][91][92][93], enhanced coagulation [94], and reduced fibrinolysis [95][96].