Submitted Successfully!
Thank you for your contribution! You can also upload a video entry related to this topic through the link below:
https://encyclopedia.pub/user/video_add?id=10939
Check Note
2000/2000
Vaccination Attitudes
Edit
This entry is adapted from 10.3390/vaccines9060607

Vaccine hesitancy is a complex health problem, with various factors involved including the influence of an individual’s network. According to the Social Contagion Theory, attitudes and behaviours of an individual can be contagious to others in their social networks.

Vaccination attitudes and uptake can spread within networks and influenced by each individual’s social contacts [1]. According to the Social Contagion Theory, an individual can exhibit behaviour modelled by another person or adopt the attitudes of members of their social network [2][3][4]. For example, the food choices of one spouse can predict similar food choices of the other spouse [5], and having an obese spouse can predict by up to 40% whether the other spouse will become obese [6]. Therefore, the Social Contagion Theory can inform our understanding on how one’s health outcomes can be influenced by their social network and how attitudes and behaviours are transmitted from one individual to another [7]. This can be translated to vaccination research and policy where understanding how vaccination attitudes and uptake are spread within social networks can inform public health policies and interventions to improve vaccination rates.
A number of network topological features are involved in social transmission of attitudes and behaviours within a network including social ties (i.e., the relationship between individuals such as friendships) and the quality of the relationships [2]. Further, social transmission can be influenced by the position of a person within a network such as the person’s centrality, which may influence attitudes and behaviours to a greater extent than those who are in the periphery of the network [8]. For example, in one study [9], adolescents who were more centrally located in the network of friends and siblings were more influential upon other adolescents’ drug use and sleep outcomes than those who were not at the core of the network. Another topological feature influencing social transmission consists of clustering between individual behaviours in a social network (i.e., co-occurrence of a trait of interest among network members) which is quite prevalent across physical exercise, happiness and obesity [2]. Clustering might occur as a compendium of multiple reasons including: (a) homophily of preferences which refers to the tendency of similar individuals to connect with each other [4][10][11], (b) social influence whereby social network members might exert causal social influence on the attitudes and behaviours of the individual [2][11], (c) confounding factors which refers to the propensity that certain areas of a social network are subject to same externalities [4], and (d) simultaneity which refers to the tendency for connected individuals in a social network to co-influence each other [4].
The way that attitudes and behaviours are spread have been examined in both egocentric and sociocentric networks. Egocentric refer to networks of individuals that are mapped with information provided on their ties and sociocentric are networks that entail the interactions of all members of a community or group [7]. Specifically, there have been studies examining the spread of happiness [11], food choices [5], obesity [6], smoking [12], depression [8], alcohol consumption [13], and most recently of social distancing behaviours during the COVID-19 pandemic [14] in several social networks. A significant effect of social networks in individuals’ attitudes and behaviours was identified in all studies [5][6][8][11][12][13][14]. For example, in a longitudinal sociocentric study [12], a sibling, friend or spouse who stopped smoking influenced the decrease in an individual’s smoking by 25–67%.
Vaccination attitudes and uptake may also spread within social networks. A decision to vaccinate or not is usually made based on local vaccine policies, information from social media, as well as an individual’s social network [15][16]. The rates of under-vaccinated adults and children are increasing and this can be attributed to vaccination hesitancy [15][16], which refers to the delay in accepting or refusing vaccination despite its availability [16]. Vaccination hesitancy is an important and complex problem that contributes to outbreaks of diseases and to increased mortality rates [15][16][17]. Examining the influence of social networks in individuals’ vaccination attitudes and uptake is particularly of importance given that at present the world is in the midst of a pandemic for which vaccines are produced and appear to be the only solution to manage the COVID-19 pandemic. For vaccination programs to be successful, a critical mass of the population needs to receive the vaccine, thus the spread of vaccination hesitancy is a major barrier that governments are facing globally.

2. Description of Methodology and Analytical Approach

3. Transmission of Vaccination Attitudes and Uptake within Social Networks 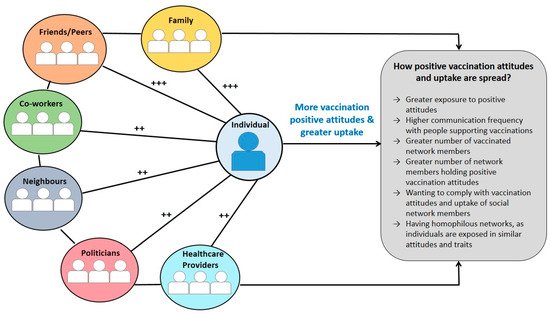 Figure 1. A summary of findings explaining how vaccination attitudes and uptake are transmitted within social networks. Note. ++ Lower influence on vaccination attitudes and uptake of individuals compared to other network members (family, peers and friends) based on the total number of studies reporting this information; +++ Higher influence on attitudes and vaccination uptake of individuals compared to other network members (neighbours, co-workers, politicians, healthcare providers) based on the total number of studies reporting this information.
Most of the included studies (n = 8, 72.7%) reported that family and friends/peers significantly influenced self and childhood vaccination attitudes and uptake. In contrast, only two studies (18.2%) reported that healthcare providers [20][27] and co-workers [18][25] and one study (9.0%) that politicians [20] significantly influenced vaccination attitudes and uptake. For example, Casillas et al. [22] reported that discussing about the vaccine with family and/or friends significantly increased the odds for perceiving the HPV vaccine as effective (Odds Ratio = 1.98, 95% CI: 1.04–3.78) compared to discussing them with the healthcare provider which had a non-significant effect (Odds Ratio = 1.71, 95% CI: 0.86–3.39) Some studies [22][23][19][20][27][28] found that participants held more positive attitudes towards self and childhood vaccinations when they were discussing them with family and friends/peers who held similar attitudes, or when they perceived their family and friends/peers holding positive attitudes towards self and childhood vaccinations. Vaccination uptake for self or children increased when the individuals’ network was comprised mostly by vaccinated family and friends [19][21][27] or when parents observed their peers vaccinating their child [20]. Conversely, vaccination uptake for self or children decreased if family and friends were vaccine hesitant or held negative attitudes toward vaccinations [19][28]. Moreover, in a sample of foundation doctors, participants were more likely to get vaccinated when they had a higher number of vaccinated neighbours in their network [24]. Additionally, in a sample of individuals working together in organizations (e.g., health and social services, financial services), they were more likely to get vaccinated when they perceived their co-workers holding positive attitudes towards vaccinations [25].
Regarding mechanisms underlying transmission within networks, frequency of communication between network members and prolonged exposure to positive (e.g., safety, effectiveness) or negative (e.g., dangerous, ineffectiveness) self and childhood vaccination attitudes explained transmission in social networks. Specifically, participants held more positive attitudes towards self and childhood vaccinations and greater likelihood to get vaccinated or vaccinate their child when they were more frequently exposed to positive vaccination attitudes than negative [19][27]. In addition, participants were more likely to vaccinate their child when they frequently discussed vaccinations with family and friends who held positive vaccination attitudes [20]. Self-vaccination also increased when participants felt that their significant others wanted them to be vaccinated or when they wanted to comply with the vaccination behaviour of their social networks [25][28].
Clustering of attitudes was identified in a sample of co-workers, with participants tending to share similar vaccination attitudes with people working within the same group [25]. Participants were more likely to get vaccinated when people working within the same group were vaccinated or when they perceived them as supporters of vaccinations. In contrast, no clustering was identified in university students, with vaccinated students being as likely as non-vaccinated students to be friends [23]. Centrality evidence was only reported by one study [20], in which it was found that the centrality of peers and opinion leaders (i.e., political, religious and traditional medicine providers) within social networks did not influence mothers’ behaviour to vaccinate their children.
Further, homophily was found to influence the transmission of vaccination attitudes and uptake within social networks [19][20][26][21]. Out of the five (45.5%) studies that reported results on homophily, four (80.0%) observed the presence of homophily in the social network, with race/ethnicity reported by all studies influencing the formation of networks [19][20][26][21]. Additionally, members of social networks presented with similarities in educational level, and parental and marital status [19][20][26][21]. For example, Goldberg [20] and Fu et al. [19] identified that peers who influenced parents’ decision to vaccinate their children were more likely to be of the same race/ethnicity (African Americans, Muslims, Hausa), gender (females), marital status (married), be parents, and with similar educational level (no formal education). Furthermore, Mascia et al. [21] found that vaccinated children tended to have other vaccinated children in their networks with similar ethnicity and class. Hernandez et al. [26], found that pregnant women with their first child tended to have a social network with similar education, with well-educated women having a well-educated network supporting vaccination uptake. Therefore, individuals tend to have homogeneous networks (see Figure 2 for a summary of the mechanisms). Suggestions for further research based on the type of network, vaccination and attitude are presented in Table 2.
Table 2. Needs for further research based on types of social network, vaccinations and attitudes.

As this study was a rapid scoping review, quality assessment of included studies was not conducted. Furthermore, the studies included a variety of populations (e.g., students, mothers, parents, children), making it more complex to assess or synthesize all studies under the same rubric. In addition, although we searched several databases, we may have missed some studies due to the inclusion of studies published only in English.

Vaccination attitudes and uptake can be highly influenced by ones’ social network. Being exposed to positive attitudes, frequently discussing vaccinations with family and friends/peers or wanting to comply with their behaviour increases the likelihood of an individual to get vaccinated or vaccinate their child. Homophily was observed within networks with individuals tending to have similar networks, especially in respect to race and ethnicity. Public health authorities and policymakers could consider including social networks of individuals when delivering interventions or educational campaigns on vaccinations to benefit members of the network who can be influenced negatively towards vaccinations. Tailoring interventions and campaigns to the target populations is strongly advised. Only then may vaccine hesitancy rates be reduced, contr

More
© Text is available under the terms and conditions of the Creative Commons Attribution (CC BY) license (http://creativecommons.org/licenses/by/4.0/)
Upload a video for this entry
Information
Subjects: Virology
Contributor MDPI registered users' name will be linked to their SciProfiles pages. To register with us, please refer to https://encyclopedia.pub/register :
Pinelopi Konstantinou
View Times: 55
Revisions: 3 times (View History)
Update Time: 17 Jun 2021
Table of Contents
1000/1000
Hot Most Recent