Submitted Successfully!
Thank you for your contribution! You can also upload a video entry related to this topic through the link below:
https://encyclopedia.pub/user/video_add?id=10895
Check Note
2000/2000
Viral Infections and Thymus
Edit
Upload a video
This entry is adapted from 10.3390/microorganisms9061177

The thymus gland is a primary lymphoid organ for T-cell development. T-cells are one of the white blood cells that play a critical role in adaptive immune response. Various viral infections can result in the disturbance of thymic functions.

The thymus gland is a primary lymphoid organ for T-cell development. Various viral infections can result in disturbance of thymic functions. Medullary thymic epithelial cells (mTECs) are important for the negative selection of self-reactive T-cells to ensure central tolerance. Insulin-like growth factor 2 (IGF2) is the dominant self-peptide of the insulin family expressed in mTECs and plays a crucial role in the intra-thymic programing of central tolerance to insulin-secreting islet β-cells. Coxsackievirus B4 (CVB4) can infect and persist in the thymus of humans and mice, thus hampering the T-cell maturation and differentiation process. The modulation of IGF2 expression and protein synthesis during a CVB4 infection has been observed in vitro and in vivo in mouse models. The effect of CVB4 infections on human and mouse fetal thymus has been studied in vitro. Moreover, following the inoculation of CVB4 in pregnant mice, the thymic function in the fetus and offspring was disturbed. A defect in the intra-thymic expression of self-peptides by mTECs may be triggered by CVB4. The effects of viral infections, especially CVB4 infection, on thymic cells and functions and their possible role in the pathogenesis of type 1 diabetes (T1D) are presented.

Enteroviruses (EVs) are small, non-enveloped, single-stranded, positive-sense RNA viruses that belong to the Picornaviridae family. The Enterovirus genus comprises 15 species including 7 species involved in human diseases (Enterovirus A–D and Rhinovirus A–C). Group B coxsackieviruses encompassing six serotypes (CVB 1-6) are classified within the Enterovirus-B species [1][2]. These viruses are ubiquitous and responsible for a wide range of infections ranging from asymptomatic and mild diseases to serious illnesses. EVs have been linked to some chronic diseases such as dilated cardiomyopathy and type 1 diabetes mellitus (T1D) [3]. T1D is a multifactorial disease leading to β-cell destruction that disrupts insulin production. EV infections have been proposed as an important environmental factor with a major role in T1D pathogenesis [4]. Stewart et al. provide a link between viral infection and autoimmune diabetes by developing transgenic mice in which the insulin-producing β-cells express interferon-α (IFN-α). Local production of this antiviral cytokine by β-cells could trigger an inflammatory reaction involving the activation of natural killer cells, macrophages and T-cells, leading to hypoinsulinemic diabetes [5]. Horwitz et al. found that bystander activation could have a role in the activation of autoreactive T-cells against β-cells, owing to the initial viral infection. This infection could create an inflammatory microenvironment by stimulating the production of immune system factors such as cytokines and chemokines. In susceptible individuals, autoreactive T-cells that escaped thymic selection might become non-specifically stimulated. Eventually, those autoreactive T-cells will be activated owing to the pro-inflammatory microenvironment [6]. Molecular mimicry has also been proposed as a possible mechanism of T1D, in which a viral infection can stimulate an aggressive response of T-cells. Indeed, viruses may carry an epitope that strongly resembles certain structures of β-cells, leading to auto-reaction of T-cells against both viral and β-cell epitopes [7][8]. The thymus gland plays a major role in central tolerance through immunologic self and non-self-discrimination ability and self-specific regulatory T-cells (Treg) positive selection in perinatal life. However, T-cell selection in the thymus can be disrupted by some viral infections [9]. The persistence of EVs in pancreatic tissues has been demonstrated in human and animal models [10][11]. Moreover, it has been suggested that exposure to EVs in the earliest phase during fetal growth may lead to a defect in intra-thymic self-presentation, in turn leading to auto-destruction of β-cells by self T-cells [12].
In this review, after a presentation of the function of the thymus, the effects of viral infections and, especially, coxsackievirus B4 (CVB4) infections on thymic cells and thymic functions and the potential results of these effects in the pathogenesis of T1D are presented.

3. Viral Infections and the Thymus Gland

Viral infections can manipulate thymopoiesis and the thymus environment, possibly leading to phenotypic and functional modifications in the thymus. Different viruses have been reported to play a role in thymus dysfunction [13][14][15][16] (Figure 1). 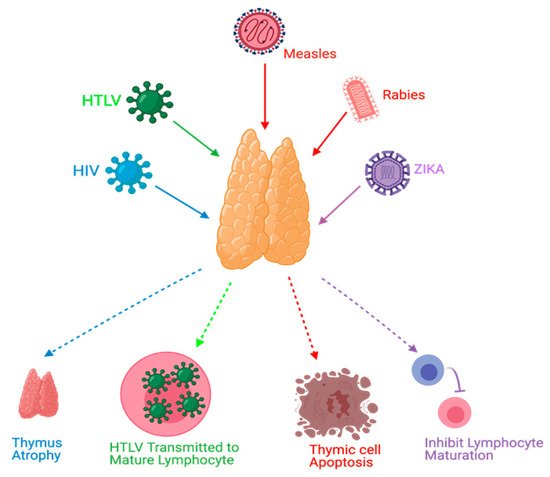 Figure 1. Effects of viral infections on the thymus. HIV causes thymus atrophy. HTLV transmission occurs through mature lymphocytes. Measles can cause thymic cell apoptosis. Rabies and Zika virus infections can inhibit lymphocyte maturation.
Thymus functions during an HIV infection, which belongs to the retrovirus family, have been extensively studied. The mechanisms of these dysfunctions might include, but are not limited to, direct infection of the thymus by HIV, thymus structural changes, and apoptosis [13][17]. Moreover, it has been found that the thymus can retain its normal function following highly active antiretroviral therapy (HAART) in HIV-infected individuals, and this can be a useful predictor to ascertain HAART effectiveness [18][17][19]. Furthermore, thymic dysfunctions have been associated with HIV progression [13][14]. Human T-cell lymphotropic virus (HTLV), which belongs to the same family of HIV, can target the thymus. TECs play a role in the pathogenesis of HTLV-1 infections and act as a reservoir to transmit the virus to T-lymphocytes [20]. Rabies is a viral disease that has been found to target the thymus gland in animal models. Some reported mechanisms of rabies virus infection were apoptosis, depletion of thymocytes, and suppression of cell-mediated immunity [21][22][23][24][25]. Thymic apoptosis has also been reported in mouse hepatitis virus infection in animal models [26]. Measles was also found to cause thymic apoptosis in a murine model and terminal differentiation of TECs in human cortical thymic epithelial cell lines [27][28]. Moreover, Measles virus was detected in TECs of humans during the acute phase of infection and it can grow in the thymus of monkeys [27][29][30]. Ebola virus was also found to cause thymic infection in a murine model [31]. Cytomegalovirus (CMV) was studied in a murine model and found to replicate and persist in the thymic medulla, rather than the cortical region. Moreover, TECs were the primary hosts for viral replication. This infection was highly reduced when treated with antivirals that target CMV [32]. Zika virus was recently discovered to be able to infect the thymus, specifically TECs; this could affect thymocyte development [33]. TREC was used as a potential marker in respiratory syncytial virus (RSV) infections in which TRECs can be reduced during the severe presentation of RSV infections [34].

Dysfunction of the thymus gland is a crucial step toward the development of organ-specific autoimmune diseases such as T1D. Viruses can disrupt thymic functions through inducing conditions such as thymic atrophy, TEC dysfunction, apoptosis, and lymphocyte maturation impairment. EVs have been extensively linked to T1D pathogenesis, and this can be explained by EV-induced thymic dysfunction in the natal or perinatal life. Thymic infection by EVs can interfere with T-cell maturation or lead to autoreactive T-cell production, and both effects are potentially involved in T1D development. The results of experimental studies show that CVB4 infection can have multiple effects on the thymus. Whether these effects result in the dysregulation of tolerance involved in the pathogenesis of T1D is an issue that deserves further studies.

More
© Text is available under the terms and conditions of the Creative Commons Attribution (CC BY) license (http://creativecommons.org/licenses/by/4.0/)
Upload a video for this entry
Information
Subjects: Microbiology
Contributor MDPI registered users' name will be linked to their SciProfiles pages. To register with us, please refer to https://encyclopedia.pub/register :
Abdulaziz Alhazmi
View Times: 147
Revisions: 3 times (View History)
Update Time: 17 Jun 2021
Table of Contents
1000/1000
Hot Most Recent