Submitted Successfully!
Thank you for your contribution! You can also upload a video entry related to this topic through the link below:
https://encyclopedia.pub/user/video_add?id=10847
Check Note
2000/2000
Age-Related Alterations at Neuromuscular Junction
Edit
Upload a video
This entry is adapted from 10.3390/cells10061307

With advancing aging, a decline in physical abilities occurs, leading to reduced mobility and loss of independence. Although many factors contribute to the physio-pathological effects of aging, an important event seems to be related to the compromised integrity of the neuromuscular system, which connects the brain and skeletal muscles via motoneurons and the neuromuscular junctions (NMJs). NMJs undergo severe functional, morphological, and molecular alterations during aging and ultimately degenerate. The effect of this decline is an inexorable decrease in skeletal muscle mass and strength, a condition generally known as sarcopenia. Moreover, several studies have highlighted how the age-related alteration of reactive oxygen species (ROS) homeostasis can contribute to changes in the neuromuscular junction morphology and stability, leading to the reduction in fiber number and innervation. Increasing evidence supports the involvement of epigenetic modifications in age-dependent alterations of the NMJ. In particular, DNA methylation, histone modifications, and miRNA-dependent gene expression represent the major epigenetic mechanisms that play a crucial role in NMJ remodeling. It is established that environmental and lifestyle factors, such as physical exercise and nutrition that are susceptible to change during aging, can modulate epigenetic phenomena and attenuate the age-related NMJs changes.

The decline in physical ability and reduced mobility represent hallmarks of aging. While several events are known to contribute to muscle loss during aging, including chronic low-grade inflammatory status [1], reduced protein synthesis [2], mitochondrial dysfunction [3], and impaired satellite cell function [4], it is generally accepted that the decline in neural function is one of the principal factors leading to the pathological status known as sarcopenia [5][6][7]. Indeed, the nervous system not only controls muscle contraction and voluntary movements [8] but also affects myoblast orientation [9], skeletal muscle fiber specification, and myosin heavy chain (MHC) isoform expression [10]. Skeletal muscle fibers are classified as fast or slow according to the motor neuron activity, their distinct oxidative capacities, and ATPase activities [11]. These properties may be altered by a decrease in motor units, denervation of muscle fibers, and changes in NMJs [12]. Indeed, slow muscle phenotype is promoted by tonic motor neuron activity, while infrequent motor neuron firing results in fast fiber generation [12]. Moreover, cross reinnervation experiments demonstrated that fast muscles switch into slow ones when re-innervated by a slow nerve, whereas slow muscles switch into fast ones once re-innervated by fast nerve [13][14]. It has been reported by Klitgaard et al. that co-expression of different isoforms of MHC in a single muscle fiber increases with age, suggesting a continuous shift in the type of muscle fiber [15], and it is demonstrated that muscles in elderly individuals contain more slow muscle fibers that reduce contraction ability [16]. This also supports endplate fragmentation and functional denervation [17].
The inability of aged motor axons to efficiently re-innervate muscle fibers following bouts of degeneration [18] contributes to the atrophy of muscle fibers and loss of motor neurons. Motor neuron loss accompanied by muscle fiber loss may result in a consequent age-related increase in intermuscular fat and fibrous tissue [19][20], a minor degree of muscle fiber grouping [21], and a decrease in muscle size [6][22].
One possible mechanism of this progressive impairment of the re-innervation process seems related to age-associated degeneration of NMJ. NMJ is a synaptic connection where the peripheral nervous system contacts skeletal muscle fibers, thus controlling essential processes such as breathing and body voluntary movements [8]. Significant deterioration, including postsynaptic apparatus fragmentation, denervation, multiple innervations, and axon sprouting, has been observed in this critical region with advancing age [23][24][25]. Interestingly, similar defects characterize several severe motor neuron diseases such as amyotrophic lateral sclerosis (ALS), suggesting that strategies aimed to preserve NMJ integrity may be crucial in understanding the critical components involved in aging and ALS [26][27].
Although skeletal muscle fibers are characterized by having many nuclei, only those placed in the proximity of the NMJ are important for the transcription of the genes involved in NMJ structure, function, and maintenance [28][29][30]. The correct localization of synaptic nuclei at the NMJ requires the interplay between the cytoskeleton and several nuclear envelope proteins to effectively transduce cytoskeletal forces to the nucleus to regulate signaling pathways, chromatin organization, and gene expression [31][32][33][34]. It has been demonstrated that lamin A/C, an intermediate filament involved in establishing a continuous physical link between the nuclear lamina and the cytoskeleton [35][36][37][38], is reduced in aged muscles, and its mutations are implicated in premature aging disorders [39][40][41]. In particular, a recent paper published by Gao et al. demonstrated that muscle-specific lamin A/C mutation results in progressive denervation, AChR cluster fragmentation, and neuromuscular dysfunction [42]. These results demonstrate that lamin A/C is critical in the maintenance of NMJ and suggest that alterations in the cytoskeleton-nuclear network may contribute to NMJ degeneration in aged muscle.
Increasing evidence supports the involvement of epigenetic modifications in age-dependent morphological and functional alterations of the NMJ [25][43][44]. In particular, DNA methylation, histone modifications, and miRNA-dependent gene expression represent the major epigenetic mechanisms that play a crucial role in NMJ remodeling [45][46][47].

Three principal elements compose NMJ: the presynaptic motor nerve terminals packed with synaptic vesicles containing the neurotransmitter acetylcholine (ACh); the synaptic cleft; and the deeply folded postsynaptic membrane of the muscle fiber, also referred to as the endplate, where acetylcholine receptors (AChRs) are located. When an action potential reaches the pre-synaptic element, voltage-dependent calcium channels open, allowing calcium to trigger the delivery of ACh in the synaptic cleft. Acetylcholine triggers AChR located in the post-synaptic membrane to produce an action potential, which in turn activates voltage-gated dihydropyridine receptors (DHPRs) located in the sarcolemma, and subsequently ryanodine receptors (RyRs) located in the sarcoplasmic reticulum membrane. The nerve terminal is covered by specialized glial cells, called terminal Schwann cells (tSCs), that produce a basal lamina that fuses with that of the muscle fiber at the boundary of the NMJ [48][49][50]. Moreover, fibroblast-like cells, known as kranocytes or perisynaptic fibroblasts, form a loose cover over the NMJ and participate in nerve repair and regeneration, thus representing other crucial players in neuromuscular functionality [50][51] (Figure 1).

Figure 1. Schematic representation of NMJ architecture. NMJ is composed of three major elements: the presynaptic motor nerve terminals packed with synaptic vesicles containing the neurotransmitter ACh; the synaptic cleft; and the deeply folded postsynaptic membrane of the muscle fiber, where AChRs are placed. The NMJ-associated cells, tSCs, and kranocytes are also shown.
During aging, NMJs undergo dramatic morphological, functional, and molecular changes that lead them to ultimately degenerate [52][53][54]. At the level of the presynaptic region, increased axon diameter and larger nerve terminal area have been observed [23][55]. However, this effect is not accompanied by increased Ach stores, since it has been demonstrated that as presynaptic branching increases with age, the quantity of available Ach decreases [56][57]. At the postsynaptic level, the endplates decrease in size and are severely fragmented, and the number and length of postsynaptic folds are reduced, leading to a functional impairment of NMJ response [58]. Along with these modifications, a gradual decrease in the number of AChRs per junction has been observed [59]. Moreover, tSCs migrate away from the motor nerve terminal and protrude branches into the synaptic cleft, contributing to a functional decline of the neuromuscular system in aging [21][60].
A key role in the communication between nerve and muscle is played by the agrin-muscle-specific kinase (MuSk)–low-density lipoprotein receptor-related protein 4 (Lrp4) signaling pathway, which ensures the correct transmission of the action potential from the nerve terminal to the endplate, thus facilitating myofibrillar excitation [61][62]. It has been demonstrated that the agrin–MuSk–Lrp4 signaling pathway may be dysregulated with advancing aging. Agrin is expressed at NMJs by nerve terminals, muscle fibers, and tSC, where it is necessary for clustering of AchRs in muscle fibers [63][64][65][66][67][68]. In a mouse experimental model, Agrin impaired expression resulted in NMJ fragmentation, similar to what was observed in aged NMJs and premature sarcopenia [69]. Moreover, it has been demonstrated that the expression levels of NMJ-associated genes MuSk and Lrp4 appear to increase in aged muscle [70]. Interestingly, these genes are also upregulated in the denervated skeletal muscle of young mice, suggesting that aging may cause denervation of NMJs [71].
It has also been demonstrated that mitochondria dysfunction and oxidative stress, along with increased levels of intracellular calcium boost, determine the decline in NMJ [72][73], together with a reduced number of synaptic vesicles, similarly to what was observed in ALS [27][74][75][76]. 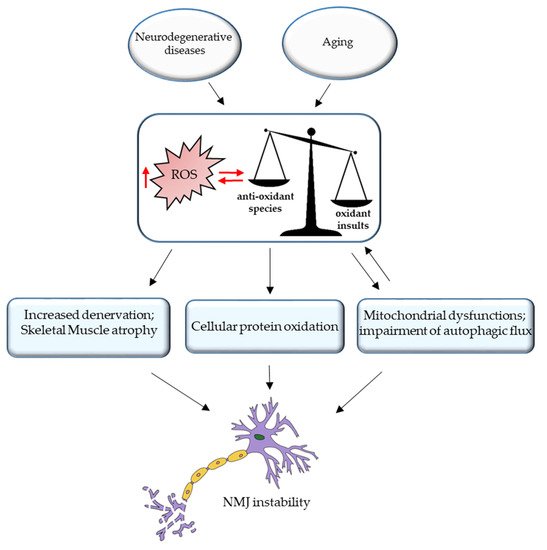 Figure 2. Oxidative stress and NMJ instability. Excessive ROS production during aging or neurodegenerative disorder is responsible for the increased denervation and skeletal muscle atrophy, cellular protein oxidation, mitochondrial dysfunction, and impairment of autophagic flux, leading to NMJ instability.
In conclusion, this evidence demonstrates that the age-related alteration of ROS homeostasis affects muscle–nerve communication; therefore, the maintenance of redox balance can be considered as a good therapeutic tool to counteract the decline of NMJ functionality of elderly individuals.

More
© Text is available under the terms and conditions of the Creative Commons Attribution (CC BY) license (http://creativecommons.org/licenses/by/4.0/)
Upload a video for this entry
Information
Subjects: Cell Biology
Contributor MDPI registered users' name will be linked to their SciProfiles pages. To register with us, please refer to https://encyclopedia.pub/register :
Bianca Maria Scicchitano
View Times: 101
Revisions: 2 times (View History)
Update Time: 15 Jun 2021
Table of Contents
1000/1000
Hot Most Recent