Submitted Successfully!
Thank you for your contribution! You can also upload a video entry related to this topic through the link below:
https://encyclopedia.pub/user/video_add?id=10778
Check Note
2000/2000
TSPAN8
Edit
This entry is adapted from 10.3390/biom10030388

Tetraspanin 8 (TSPAN8) is a member of the tetraspanin superfamily that forms TSPAN8-mediated protein complexes by interacting with themselves and other various cellular signaling molecules. These protein complexes help build tetraspanin-enriched microdomains (TEMs) that efficiently mediate intracellular signal transduction. In physiological conditions, TSPAN8 plays a vital role in the regulation of biological functions, including leukocyte trafficking, angiogenesis and wound repair. Recently, reports have increasingly shown the functional role and clinical relevance of TSPAN8 overexpression in the progression and metastasis of several cancers.

Monoclonal antibody therapy is one of the most effective therapeutic regimens against cancer. Since the Food and Drug Administration’s (FDA’s) approval of Muromonab-CD3 (OKT3), a mouse monoclonal antibody targeting CD3, recombinant DNA technology has led to the remarkable development of therapeutic antibodies, including humanized and fully human antibodies. Currently, numerous therapeutic antibodies are being widely used in clinics for treating hematological and solid tumors [1]. However, despite the rapid growth of the therapeutic antibody market during the last two decades, there remains only a limited number of available disease-specific biomarkers and therapeutic targets. Consequently, there is a substantial medical need for all-encompassing, effective cancer therapy. Nevertheless, molecular targets that can be used for therapy of certain cancer types do exist. For example, trastuzumab (Herceptin®), a humanized antibody targeting human epidermal growth factor receptor 2 (HER2), is being used for treating patients with HER2-positive breast cancer. Cetuximab (Erbitux®), a mouse/human chimeric antibody targeting anti-epidermal growth factor receptor (EGFR), received FDA approval for treating wild-type KRAS and EGFR-positive colorectal cancers [2]. A previous report has suggested trastuzumab to be effective for treating patients with HER2-positive breast cancers, representing approximately 30% of the total number of patients with metastatic breast cancers [3]. Conversely, approximately 20–30% of the total number of patients with metastatic colorectal cancers have been reported to be responsive to cetuximab [4]. Tumor progression and metastasis are complex and multistep processes. For example, in hematogenous metastasis, cancer cells first detach from the primary tumor; then migrate through the extracellular matrix, penetrate the basal membrane, lymphatic walls, and the endothelia of the vessel wall; and subsequently allow the cancer cells to circulate through the bloodstream. Circulating cancer cells can undergo hematogenous spread, settlement and growth in distant organs [5]. In this regard, the identification of a novel biomarker and therapeutic target, as well as understanding the molecular mechanism of metastatic cancer cells, are essential for overcoming the unmet medical need in current cancer therapy.

2. The Structure and Physiological Role of TSPAN8 in Cells

TSPAN8 is a member of the tetraspanin superfamily. It consists of four transmembrane domains (TM1-4); two extracellular loops, such as a small extracellular loop (SEL) between TM1 and TM2, and a large extracellular loop (LEL) between TM3 and TM4. It also contains three cytosolic domains including a short amino- and carboxy-terminal tail with a small intracellular loop between TM2 and TM3. Furthermore, LEL contains six conserved cysteine residues forming disulfide bonds that are essential for LEL conformation [6][7].
To date, different research groups have generated two monoclonal antibodies that target TSPAN8 as an antigen. Szala et al. were the first to report that TSPAN8 (CO-029) is a monoclonal antibody-defined cell surface glycoprotein of 27-34 kDa. They performed bio-panning with a monoclonal antibody to identify its target antigen from COS cells transfected with a cDNA library from the SW948 colorectal carcinoma cell line. They also showed that TSPAN8 is a tumor-associated antigen expressed in various cancer cell lines, including colorectal carcinoma, lung carcinoma, astrocytoma and ovarian carcinoma [8]. Later, Claas also reported that D6.1A recognized by a monoclonal antibody D6.1 is a rat homolog of CO-029 and plays a critical role in increasing the metastatic potential [9].
Several TSPAN8 expression profiling and knockout models have shown the physiological roles of TSPAN8 in cells. Champy et al. reported that human and mouse TSPAN8 mRNA was highly expressed in cells in the digestive system, such as the stomach, small intestines and colon, where the genetic ablation of TSPAN8 resulted in the reduction (15.6%) of body weight in only male mice. Although the detailed molecular mechanism is still unknown, they suggested that TSPAN8 is at least in part associated with regulating body weight [10]. Furthermore, Zhao et al. reported that TSPAN8 is strongly expressed in the gastrointestinal tract, including the esophagus, stomach, small and large intestines, and some reproductive organs such as the ovary and testis, whereas TSPAN8 knockout does not show any changes in organ structures and pathological phenotype. Additionally, Zhao et al. revealed evidence suggesting the physiological roles of TSPAN8. Firstly, they observed that TSPAN8 knockout does not affect the immune response of leukocytes in response to mitogenic and antigenic stimuli compared to wild-type leukocytes, whereas it showed reduced leukocyte trafficking. Secondly, they showed a delayed and impaired vessel sprouting from the aortic rings in TSPAN8 knockout mice. Furthermore, compared to wild-type endothelial cells, the migration of TSPAN8 knockout endothelial cells was sharply reduced. Lastly, delayed wound healing was also observed in TSPAN8 knockout mice. In summary, these results suggest that TSPAN8 may be necessary for the regulation of leukocyte trafficking, angiogenesis and wound repair [11] (Figure 1). 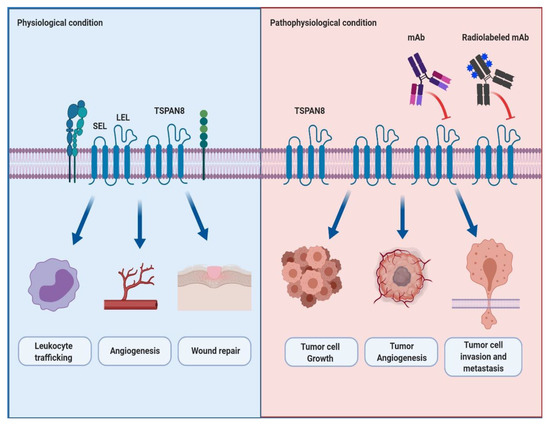 Figure 1. The schematic representation of the physiological and pathophysiological roles of TSPAN8 and the effect of a newly developed antibody targeting TSPAN8 in TSPAN8-mediated cancer progression and metastasis. Under physiological conditions, TSPAN8 interacts with itself and other binding proteins to efficiently convey outside signals to the inside of the cell. It plays a key role in the regulation of many cellular functions such as leukocyte trafficking, angiogenesis and wound repair. Under pathophysiological conditions such as cancers, it has been well-known that TSPAN8-overexpression is closely associated with the cell growth, angiogenesis, and invasion and metastasis of tumor cells. Furthermore, it is also believed that the monoclonal antibody or radiolabeled monoclonal antibody to TSPAN8 may be effective in suppressing TSPAN8-mediated tumor progression and metastasis. Abbreviation: mAb, monoclonal antibody.

3. The Role of TSPAN8 in Cancer Progression and Metastasis

In the past 20 years, TSPAN8 appears to have played pivotal roles in the initiation and progression of multiple cancers. TSPAN8 is highly expressed in various cancerous tissues and mediates the proliferation, survival, invasion and metastasis of cancer cells (Figure 1). In this review, we examined the current status regarding the involvement of TSPAN8 in the development of several cancer types.

In pancreatic cancer, both TSPAN8 and α6β4 integrin are highly expressed and correlate with increased tumor cell motility by promoting integrin activation through focal adhesion kinase, paxillin and Src recruitment [12][13]. Additionally, TSPAN8 is directly associated with CD9, CD81 and prostaglandin F2α receptor-regulatory protein (FPRP) in pancreatic carcinoma cells. This core complex is associated with α3β1 integrin, CD151, phosphatidylinositol 4-kinase (PI4K) and EPCAM at a higher level of integration [14]. Moreover, the overexpression of TSPAN8 in pancreatic cancer stimulates the upregulation of the expression of matrix metalloproteinases (MMPs), the angiogenic factor expression, as well as the secretion of urokinase-type plasminogen activator (Upa) and the expression of vascular endothelial growth factor (VEGF) and the VEGF receptor. All of these increases in expression comprehensively induces angiogenesis [15].

In colon carcinomas, TSPAN8 regulates colon cancer cell motility cooperation with the E-cadherin/p120-catenin (p120ctn) complex, which induces the selective recruitment of the α2β1 integrin pathways and interferes with small GTPase regulation [16]. TSPAN8 promotes the progression and metastasis of colorectal cancer by enhancing tumor cell movement and deregulating cell adhesions by altering the surface expression or activity of integrins and CD44 [17].

The expression of TSPAN8 is increased both at the mRNA and protein levels in gastric cancer tissues and is associated with poor survival. The knockdown of TSPAN8 attenuates the effects of the EGFR on gastric cancer cell proliferation and invasion [18][19]. TSPAN8 promotes gastric cancer cell growth and metastasis through the activation of the extracellular-signal-regulated kinase/mitogen activated protein (ERK/MAPK) pathway [20]. Moreover, TSPAN8 impairs the sensitivity of gastric cancer cells to chemotherapeutic agents by mediating Wnt/β-catenin activity [21].

TSPAN8 is frequently found and overexpressed at both the mRNA and protein levels in hepatocellular carcinoma (HCC) and TSPAN expression is correlated with intrahepatic spreading [22]. TSPAN8 could promote HCC migration and invasion in vitro by increasing the expression of ADAM12m, a membrane integrating disintegrin and metalloproteinase expression [23]. TSPAN8 also plays a critical role in mediating astrocyte-elevated gene-1 (AEG-1)-induced invasion and metastasis [24].

The expression level of TSPAN8 is elevated in malignant glioma tissues and is correlated with tumor grading. The knockdown of TSPAN8 reduces proliferation and migration and increases the sensitivity of temozolomide (TMZ)-induced cell death and the apoptosis of glioma cells [28]. TSPAN8 forms a complex with Rapamycin-insensitive companion of mammalian target of rapamycin (RICTOR), a key component of mammalian target of rapamycin complex 2 (mTORC2), and integrin α3, which are required for mTORC2 activation and glioma cell migration [29]. Moreover, GSK621, a novel AMP-activated protein kinase (AMPK) activator, has shown anti-cancer activity in glioma cells by the degradation of TSPAN8 [30].

TSPAN8 is upregulated at the mRNA and protein levels in melanoma cells, where its levels are correlated with an invasive phenotype. The functional role of TSPAN8 is enhancing invasive outgrowth from tumor spheroids within matrigel without affecting cell proliferation or survival [31]. Lung cancer metastasis-related protein 1 (LCMR1) enhances the TSPAN8 expression and promotes the loss of melanoma cell-matrix adherence (mainly through β1-integrin-ILK axis) and increases in invasion in vitro and tumorigenicity in vivo [32][33]. p53 is a direct transcriptional repressor of TSPAN8 expression and regulates melanoma cell invasion in a TSPAN8-dependent manner. [34]. In contrast, β-catenin triggers the direct transcriptional activation of TSPAN8 expression, leading to melanoma invasion [35].

TSPAN8 is overexpressed in nasopharyngeal carcinoma (NPC) tissues, where it is poorly differentiated and highly-metastatic. In NPC patients, the expression of TSPAN8 is associated with a reduced survival rate. The overexpression of TSPAN8 in NPC cells promotes cell migration, invasion and metastasis through the protein kinase B (Akt)/MAPK pathway [37].