Submitted Successfully!
Thank you for your contribution! You can also upload a video entry related to this topic through the link below:
https://encyclopedia.pub/user/video_add?id=10747
Check Note
2000/2000
Salicylic Acid and Mitochondrial ROS
Edit
This entry is adapted from 10.3390/biom10020341

Different abiotic and biotic stresses lead to the production and accumulation of reactive oxygen species (ROS) in various cell organelles such as in mitochondria, resulting in oxidative stress, inducing defense responses or programmed cell death (PCD) in plants. In response to oxidative stress, cells activate various cytoprotective responses, enhancing the antioxidant system, increasing the activity of alternative oxidase and degrading the oxidized proteins. Oxidative stress responses are orchestrated by several phytohormones such as salicylic acid (SA). The biomolecule SA is a key regulator in mitochondria-mediated defense signaling and PCD, but the mode of its action is not known in full detail.

Surviving negative effects of a wide variety of environmental fluctuations is a substantial part of plant life. Dynamic metabolic, genetic and morphologic changes of plants are necessary to acclimatize and/or adapt to harmful environmental conditions. These changes are controlled by the rapid transient or chronic production and the scavenging of reactive oxygen species (ROS) [1][2][3]. In these processes, several subcellular components have a distinguished role, such as mitochondria [4][5][6]. At the same time, the role of mitochondria can be investigated only together with other organelles (e.g., chloroplasts, nuclei, endoplasmic reticulum) in these processes, which can be mediated by various hormones, such as salicylic acid (SA) [7][8][9].

2. SA and Its Effects on the Structure of Plant Mitochondria and ETC Compartments 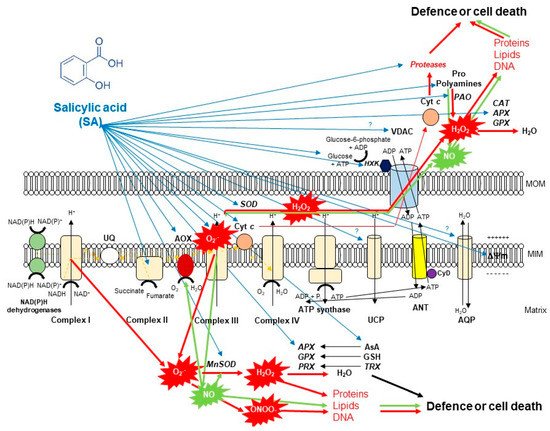 Figure 1. A schematic illustration of the effects of salicylic acid (SA) on the metabolism of reactive oxygen species (ROS) in plant mitochondria. The accumulation of endogenous SA leads to an increase in mitochondrial ROS and nitric oxide (NO) production. Mitochondrial complex III plays the dominant role in superoxide (O2•−) generation upon SA. O2•− is able to react with NO generating peroxynitrite (ONOO−) and thus can regulate the redox status of the cell or initiate cell death. However, the produced O2•− can be converted by superoxide dismutase (SOD) enzyme to H2O2. It was observed that exogenous SA treatments elevated the mitochondrial Mn-SOD activity and gene expression. The decomposition of H2O2 is mediated by several antioxidant enzymes (ascorbate peroxidase, APX; guiacol-peroxidases, POD; peroxiredoxin, PRX) and antioxidants (ascorbate, AsA; glutathione, GSH; thioredoxins, TRX) mediated by SA or H2O2 can exit from mitochondria playing role in cell signaling or oxidizing proteins, lipids and nucleic acids. Moreover, the SA-regulated alternative oxidase (AOX) plays a crucial role in the reduction of mitochondrial ROS and cell death mechanisms. The high concentration of SA not only induces toxic ROS production but also the release of cytochrome c (Cyt c) from the mitochondrial inner membrane through the permeability transition pore (PTP) formed by the voltage-dependent anion channel (VDAC) and the adenine nucleotide transporter (ANT) that contributes to the initiation of cell death. At the same time, mitochondrial hexokinases (HXKs) are important mediators of PTP regulation upon SA. However, the role of many component and molecule of mitochondria and cytosol (e.g., aquaporins, AQP; uncoupling mitochondrial proteins, UCP; polyamines such as spermine, Spm; proline, Pro) exposed to SA is not known in full details. Detailed description and references are in the text.

The mitigation of toxic ROS levels generated by different cell compartments such as mitochondria is required at each stage of the life cycle. There are various strategies providing a key for high ROS which are mediated by phytohormones such as SA. It can be summarized that the primer source of ROS is originated from the inhibition of mitochondrial ETC. SA by concentration- and time-dependent manner can contribute to the elevated ROS production or scavenging and limiting of ROS in mitochondria of plants (Figure 2). First of all, the effects of SA on AOX is the most relevant and the most investigated topic. The role of AOX (together with UCP) is crucial when cyt c is released from mitochondria during the initiation of plant PCD because respiratory electron transport can continue under this circumstance [34][35][36][37]. In addition, AOX activity can help to decrease ROS production in mitochondria [38][39] and contribute to the NO production [40][41]. Moreover, changes in the expression of AOX genes have been proposed to represent an excellent ‘reporter gene’ to evaluate the mitochondrial dysfunction under stress conditions [42]. Effects of SA on AOX transcripts and protein abundance are highly-researched areas, particularly since the role of SA in thermogenic species Sauromatum guttatum has been documented [43]. Later, the induction of AOX by SA has been observed in various plant species such as in tobacco cell suspension culture after 12 h-long-treatment with 1 mM SA [44], in isolated mitochondria from tobacco leaves within 5 h after 1 mM SA treatment [45], in Sauromatum guttatum appendix after 0.01 mM SA treatment [46], in isolated soybean cell mitochondria after 16 h-long-treatment with 1 mM SA [30], in isolated tobacco cell mitochondria treated with 0.5 mM SA for 8 h [35], in Orobanche seeds exposed to 0.02 mM SA for 1–3 days [47], in tobacco calli after 8 h-long-treatment with 0.02 mM SA [48], and in purified mitochondria from the cotyledon of yellow lupine treated with 1 mM SA for 12 h [49]. It can be concluded that effects of SA on AOX protein level did not depend on the plant cell types (leaf, calli, cell suspension) and SA caused a rapid (within 24 h) changes in the AOX function.
Normann et al. [7] measured firstly concentration-dependent effects in case of SA treatments in tobacco cell suspension culture. 0.1 mM SA induced an increase in AOX protein levels which correlated with the increase in gene expression of Aox1 after 4 h. In contrast to this observation, when 0.1 mM SA was applied, the measured increase in AOX was transient and disappeared as SA levels declined in the cells. At the same time, 0.01 mM SA also elevated the expression of other SA-responsive genes (e.g., Pathogenesis-related 1, PR1) but this effect of SA was dependent on active mitochondria [7]. Matos et al. [50] also measured that AOX capacity and protein contents increased after 24 h in mitochondria extracted from 1 mM SA-treated soybean seedlings. Interestingly, Authors observed that both AOX1 and AOX2b transcripts accumulated in response to SA after 4 h but only AOX2b expression was significantly higher after 24 h [50]. These findings suggest also a concentration- and time-dependent effect of SA on the expression kinetics of AOX. This was further confirmed by the research of Cvetkovska and Vanlerberghe [51]. Surprisingly, the lethal concentration of SA at 3 mM failed to induce the expression of Aox1a, but 0.1 mM SA elevated Aox1a transcripts within 4 h and reduced cell death based on the detection of DNA laddering. In contrast to this observation, 0.5 mM SA promoted the accumulation of Aox1a transcripts after 4 h in tobacco cell suspension culture [51]. In tobacco leaf, an incompatible plant-bacteria interaction that produced high SA levels and HR was associated with low levels of AOX, whereas an incompatible interaction that produced only low SA levels with defence induction, but no HR, was associated with high levels of AOX [51]. Several studies about viruses revealed that SA-induced resistance is much simpler in Potato virus X (PVX) execution than SA-induced resistance to Tobacco mosaic virus (TMV) e.g., by mediating ROS [52]. It was observed that AOX-regulated defensive signaling is the predominant factor in controlling SA-initiated resistance during PVX infection [53].
Direct effects of SA on the transcriptional regulation of AOX could be an interesting research topic. Based on promoter analysis, the posttranscriptional mechanism of SA in the regulation of AOX coding sequences via H2O2 can take into account in the regulation of mitochondrial stress responses [54]. Transcript analysis in Vigna unguiculata leaves has also confirmed that treatment with 0.5 mM SA and 10 mM H2O2 induced a certain extent differently the expression of two AOX coding genes, VuAox1 and VuAox2b. At the same time, both treatments caused a peak in VuAox2b expression after 6 h but the effects of SA were more prolonged on this gene [55]. In addition, NO has been also demonstrated to be an effective inducer of AOX gene expression [56][57], which could be also important in SA-mediated stress response. The opposite connection between SA and AOX has been also investigated, but this relationship needs further investigation. The study of Zhang et al. [58] hints that AOX level may (indirectly with ROS) influence SA level under biotic stress. In transgenic tobacco, which was silenced in the expression of AOX, the piercing-sucking insects (Empoasca spp.) caused more significant leaf damage. Also, HR-like cell death in response to bacterial infection (Pseudomonas syringae pv tomato DC3000) occurred more rapidly in the plants lacking AOX. Interestingly, in both cases, SA levels were significantly higher after hours in the challenged plants lacking AOX than in challenged wild-type plants [58].

More
© Text is available under the terms and conditions of the Creative Commons Attribution (CC BY) license (http://creativecommons.org/licenses/by/4.0/)
Upload a video for this entry
Information
Subjects: Plant Sciences
Contributor MDPI registered users' name will be linked to their SciProfiles pages. To register with us, please refer to https://encyclopedia.pub/register :
Péter Poór
View Times: 81
Revisions: 2 times (View History)
Update Time: 11 Jun 2021
Table of Contents
1000/1000
Hot Most Recent