Submitted Successfully!
Thank you for your contribution! You can also upload a video entry related to this topic through the link below:
https://encyclopedia.pub/user/video_add?id=10655
Check Note
2000/2000
Impact of COVID-19 on Social/Health/Economy
Edit
This entry is adapted from 10.3390/su13116314

The COVID-19 pandemic is the most large-scale pandemic on earth this century, and the impact in all life sectors is devasting and directly affected human activity in the first wave. The impact on the economy, social care systems, and human relationships is causing an unprecedented global crisis. SARS-CoV-2 has a strong direct acute impact on population health, not only at the physiological level but also at the psychological level for those who suffer it, those close to them, and the general population, who suffer from the social consequences of the pandemic. In this line, the economic recession increased, even more, the social imbalance and inequity, hitting the most vulnerable families, and creating a difficult context for public institutions to address.

In late December 2019, a series of atypical acute respiratory events occurred in Wuhan, China, which rapidly spread to other areas worldwide. It was soon discovered that a novel coronavirus was responsible, named the severe acute respiratory syndrome coronavirus-2 (SARS-CoV-2, 2019-nCoV) due to its high homology (~80%) to SARS-CoV, which caused acute respiratory distress syndrome (ARDS) and high mortality during 2002–2003 [1]. Further on, it was designated as COVID-19, and considered as a pandemic by the World Health Organization (WHO) in mid-March 2020 [2]. To date, there have been 163 million cases, with 3.39 million deaths reported worldwide [2][3].

The main concern of SARS-CoV-2 is not its mortality, but the rapid and easy transmission, which is via droplets (generally 5–10 μm) that have a short lifetime in the air and infect the upper respiratory tract, or finer aerosols, which may remain in the air for hours [4]. Therefore, the first line of affection and contention is the upper respiratory tract, and the advance of the virus will first lead to respiratory system affection [5]. However, SARS-CoV-2 virus affection occurs in different systems and tissues of the body, not only in the lung. As so, the heart, liver, kidneys, gastrointestinal tract, spleen, lymph nodes, skin, and placenta have also been affected by this virus [6]. Evidence of microvascular damage such as thrombi, endothelium, and complement activation was not limited to the lungs, being also found in the heart, liver, kidneys, gastrointestinal tract, skin, adrenal gland, and prostate, possibly reflecting systemic hyper-inflammation in these cases [7].

This holistic organic condition will depend greatly on which stage or phase of viral affection the patient is in. In this sense, 3 stages of increasing severity are well-differentiated [6].

Regardless of the pattern of viral SARS-CoV-2 infection progression, as with any viral affection, the symptoms can vary greatly from one subject to another. In the first instance, the WHO affirms that worldwide, the bulk of the infected population (approximately 80%) is asymptomatic. They enter phase one experiencing slight symptoms, such as a flu-like virus, or no symptoms [8]. The other 20% report signs of fever, dry cough, dyspnea, arthralgia, and myalgia [9]. Other symptoms may include the loss of taste and loss of smell as markers of mild to moderate infection [10]. Less common symptoms include headache, hemoptysis, rhinorrhea, and gastrointestinal symptoms such as abdominal pain, diarrhea, and nausea. In more severe cases (phase 2), lymphopenia [11] arrhythmias, acute kidney injury, as well as the production of blood clots can occur, ultimately causing a pulmonary embolism and thrombosis [12]. The magnitude of symptoms and the advance from one stage to another is related to the health status before infection.

The acute effects of the virus are well-documented by researchers, but chronic effects are still pending to be discovered and discussed. In this line, it was found that patients that successfully passed the viral infection could present symptoms of fatigue, persisted cough, shortness of breath, headache, and joint pain [13].

Another field to be explored and discussed is the psychological consequences of COVID-19, which authors predict is going to be the next so-called pandemic [14]. A large perception of fear, despair, and death has been spread worldwide. The unknown consequences, symptoms, and condition of the virus, the lack of a vaccine, and the collapse of the economic system, which is leading to a worldwide recession, are causing fear among society since we are facing the most serious pandemic of the last hundred years [15].

The COVID-19 pandemic outbreak has brought an unprecedented crisis, evolving from a health and social shock to the deepest global economic recession in nearly a century, causing more than double the impact of the 2008 financial crisis [16][17]. The quarantine and self-isolation policies imposed by many countries around the world to contain the spread of cases [18] has led to a halt for many businesses, reducing employment and economic activity worldwide [19][20]. As a result, regions have been affected by significant negative gross domestic product (GDP) growth rates and higher inequality and poverty rates [21] (Figure 1).

Worldwide, the economic contraction has led to a catastrophic hit to the global labor market. Millions of people are losing their jobs or facing reductions in their working hours. As many countries adopt strict quarantine policies, most companies have implemented an indefinite hiring freeze and many businesses have been forced to close [22]. The global job losses are estimated to be 495 million in the second quarter of 2020, a considerably larger decline than the 195 million estimated in April for the same quarter [23], reflecting the worsening situation in many parts of the world. According to the last ILO Monitor (2020), 94% of the world’s workers are currently facing a workplace closure measure in their countries or a decrease in their working hours (Figure 2). 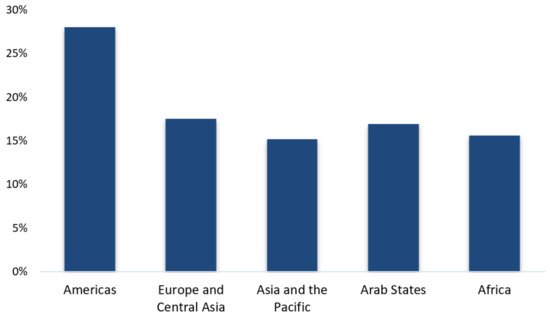 The global disruption of the COVID-19 pandemic has altered the social, health, and economic life of more than 170 countries, leaving hundreds of millions infected and three million deaths. To scientific knowledge, there are no effective treatments to adequately combat the disease, only the vaccines developed, and a scientific effort unknown as of today could bring us closer to the desired herd immunity [24]. SARS-CoV-2 has revealed many shortcomings promoted by globalization, suggesting the need to review production systems (e.g., deforestation, intensive agriculture and livestock, progressive global warming) that reduce the distance between species, increasing the probability of zoonoses [25]. Hence, massive communities of people [26], social inequalities and economic vulnerability of a very important part of the population, and massive holiday and business trips increase the probability of the rapid spread of new viruses. It does not seem that investment in public health in the most industrialized countries and economic aid to developing countries is sufficient for effective control, and much more rigorous strategies are necessary to achieve joint and effective responses [27]. It is important to program ethical and equitable strategies, and social policies developing care interventions based on high-quality scientific data to minimize their social impact on the most disadvantaged groups.

Some studies have indicated that there is an increased risk of virus transmission and a greater probability of severe and critical symptoms based on ethnicity [28][29][30][31]. Even among healthcare personnel, black or Asian doctors and nurses had a higher probability of infection and severe symptoms [32][33]. Hence, it does not seem that economic inequalities and low scientific knowledge in healthcare can explain why some ethnic groups were more affected [34][35], instead it seems that they are characteristics that can be extended to the entire population. Therefore, low educational level, extreme overcrowding at home, low socioeconomic level, and economic inequalities would not explain why some ethnic groups suffered more severe symptomatology of COVID-19 [35][36][37][38]. However, social networks have spread hate speech, false or doubtful information, humiliation, and language of social rejection on minority racial groups [39], sometimes based on real social conflicts (e.g., “Black Lives Matter” movements) and other times encouraged through false profiles with the sole objective of generating greater inequalities and promoting xenophobia [40]. Coping with strategies to control racist discourse through the Internet whilst respecting the right to freedom of speech is necessary, being the responsibility of the entire society to act against any type of intentional stigmatization. It is important to point out that the most socioeconomically vulnerable people do not have sufficient political representation in public institutions.

Social isolation is not only a problem of public health aggravated during preventive confinement. In uncertain situations or social crises, interpersonal violence increases [41]. The fight against the virus has had negative social consequences that have been linked to violence in the domestic environment [42]. Economic insecurity and lack of resources is an inherent stressor in many of the reactive and disruptive behaviors [43]. The burdens of household work (e.g., education and childcare) and other unpaid chores have mainly been an added effort to the working hours of the female gender. In addition, the loss of jobs during the pandemic have increased tension and stress within the family environment [44], increasing the risk of gender violence and child abuse.

We are facing one of the greatest challenges of social intervention, which requires fast, effective, and well-coordinated responses from public institutions, the private sector, and non-governmental organizations, to serve a population increasingly hopeless and with increasingly urgent needs [45]. Long-term legislation is necessary to help reduce the vulnerability of the less fortunate, such as intervention programs that mitigate the difficulty of access to housing [46][47]. The lower socioeconomic level is susceptible to a higher risk of infection, serious illness, and mortality from COVID-19. They are the most sensitive group and, therefore, this group should also be the ones that receive more precise intervention policies.

The study of the impact of the SARS-CoV-2 pandemic should not be limited to the biomedical field. Knowing how society responds, how social organizations manage available resources, and the socioeconomic costs of social distancing could be essential to improve intervention plans before the appearance of new viruses with pandemic potential appear. An in-depth analysis, leaving aside political rivalries, could detect the structural problems that have exacerbated social needs and hampered economic recovery. There are many gaps in the data transmitted by some countries regarding care and social intervention, suggesting the need for greater institutional and political transparency if we want to find effective programs to minimize social and economic costs to future viral challenges.

SARS-CoV-2 has a strong direct acute impact on population health, not only at the physiological level but also at the psychological level for those who suffer it, those close to them, and the general population, who suffer the social consequences of the pandemic. In this line, the economic recession increased, even more so, the social pressure. At the social level, the economic impact hit the most vulnerable families, creating a difficult context for public institutions to address. We are facing one of the greatest challenges of social intervention, which requires fast, effective, and well-coordinated responses from public institutions, the private sector, and non-governmental organizations to serve an increasingly hopeless population with increasingly urgent needs. Long-term legislation is necessary to reduce the vulnerability of the less fortunate, as well as to analyze the societal response to improve the social organization management of available resources.