Submitted Successfully!
Thank you for your contribution! You can also upload a video entry related to this topic through the link below:
https://encyclopedia.pub/user/video_add?id=10629
Check Note
2000/2000
PKGIβ/IRAG1 Signaling
Edit
Upload a video
This entry is adapted from 10.3390/ijms22115458

The inositol 1,4,5-triphosphate receptor-associated cGMP kinase substrate 1 (IRAG1), which is also named IRAG or as human homologue MRVI1, was first described in 2000 [1].

IRAG1 is a substrate protein of the NO/cGMP-signaling pathway. Molecular analysis showed that IRAG1 has a molecular weight of 125 kDa and forms a ternary complex with the cGMP-dependent protein kinase Iβ (PKGIβ) and the inositol triphosphate receptor I (IP3R-I) [1]. An investigation of the stability of this complex confirmed that IRAG1 is of great importance for the integrity of this complex [2][3]. IRAG1 is only phosphorylated by PKGIβ and not by PKGIα or PKGII and interacts with the IP3R-I [2]. This phosphorylation of IRAG1 and the interaction with the IP3R-I lead to a reduction of the cGMP-mediated IP3-dependent Ca2+ release, which was shown in cellular systems and in the Irag1Δ12/Δ12 mice [2][3][4]. In these mice, exon 12 of IRAG1 is deleted, which is coding for the N-terminus of the coiled-coil domain and resulted in a disrupted in vivo interaction between IRAG1 and IP3R-I.

Protein expression of IRAG1 is widespread in murine tissue. Smooth muscle containing tissues and platelets highly expressed IRAG1, while lower amounts of this protein were found for example in the spleen. PKGIβ correlated with IRAG1 in the amount of expression and tissue distribution [5].

Most of the pathophysiological functions of IRAG1 are still unknown. Some physiological functions are the inhibition of NO/cGMP-dependent platelet aggregation [6][7], thrombus formation [6] and regulation of the smooth muscle relaxation [4][8]. In these previous investigations some pathophysiological effects were found. Irag1Δ12/Δ12 mice developed an enlarged gastrointestinal tract and showed a reduced passage time, which demonstrated a stenosis of the pylorus and other functional disorders of gastrointestinal motility [4]. This gastrointestinal phenotype was also found in global Irag1−/− mice [8] and in both mutant mice (Irag1Δ12/Δ12 and Irag1−/−) indications of an enlarged spleen were found. In summary, a defect or loss of IRAG1 causes gastrointestinal disorders.

The proof of blood in feces is an indication of gastrointestinal bleeding. A fast and secure method for the diagnostic of (occult) blood in the feces is the Haemoccult® Test, a frequently used tool in human diagnostics. As there might be the possibility that Irag1-deficient mice may develop gastrointestinal bleeding caused by the similarities of the phenotype to the global Prkg1-KO mice [4][8][9], the feces of 14-week-old male and female IRAG1 knockout (KO) mice (IRAG1-KO, genotype: Irag1−/−) and their wild type (WT)-littermates (IRAG1-WT, genotype: Irag1+/+) were investigated (Figure 1). In total, 81% of female IRAG1-KO mice had a positive result, whereas no Haemoccult® Tests of female IRAG1-WT mice were positive. In the group of the male mice, 31% of IRAG1-KO mice had occult blood in the feces, and 8% of IRAG1-WT mice showed a positive result. The total result of both sexes presented similar results; in 56% of IRAG1-KO mice and in 5% of IRAG1-WT mice, we detected blood in the feces. To figure out if these findings are age-dependent, we analyzed the feces of six-week-old IRAG1-KO mice and their WT littermates too, and no blood was detected in the feces. 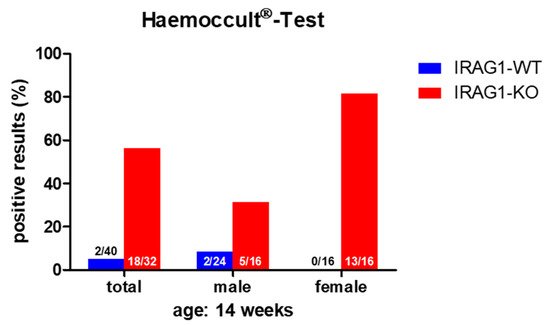 Therefore, IRAG1-KO mice contained occult blood in the feces, which may be caused by gastrointestinal bleeding.

IRAG1 and PKGIβ expression largely overlap at the protein level [5], and IRAG1 mutant mice have a similar phenotype, e.g., the dilatation of the gastrointestinal tract [4][8], reduced gastrointestinal motility [4] and bleeding (Section 2.1, Figure 1) similar to the global Prkg1-KO mice [9], and it is known that Prkg1-deficient mice develop splenomegaly [10][12]. To investigate if Irag1-deficiency caused an enlarged spleen, the weights of the spleen and body were determined, and the ratio between these weights (spleen/body-ratio) was calculated.

A lack of IRAG1 caused a significant increase in spleen weights of the female IRAG1-KO mice compared to their WT littermates (Table 1, Figure 2A), and the same result was found in the total analysis of both sexes. Between male IRAG1-WT and their KO-littermates, no differences were found. The explored body weight of the genotypes and sexes differed insignificantly (Table 1, Figure 2B) and thus, did not influence the calculation of the spleen-weight-to-body-weight ratio. The spleen/body-ratio calculated from these weights was significantly increased in the female IRAG1-KO mice and in the total analysis of both sexes compared to the corresponding IRAG1-WT (Table 1, Figure 2C). No significant difference in this ratio was found between male IRAG1-WT and IRAG1-KO mice. In 7-week-old Irag1-deficient mice, no differences were detected in these parameters compared to their WT littermates. 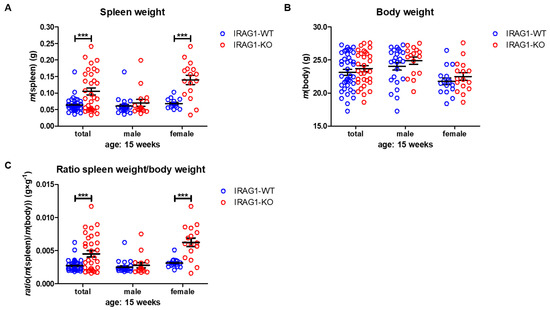 These results demonstrate that Irag1-deficiency led to an increase in the spleen weight and spleen-to-body-weight ratio. This phenotype was mainly observed in female IRAG1-KO mice. 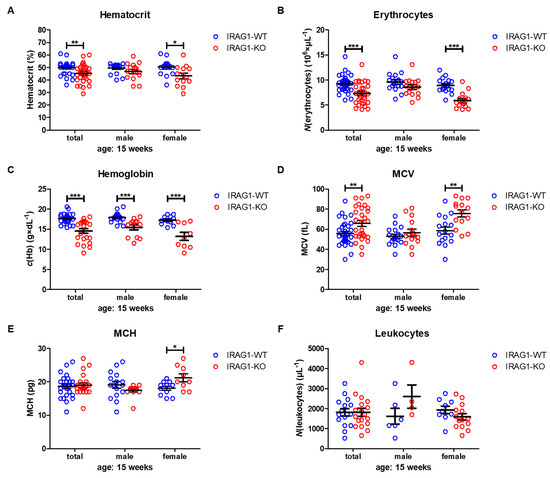 Taken together, the Irag1-deficiency caused severe anemia, as shown in the reduction of all important blood parameters. In this context, it was interesting to see that anemia was more prominent in female IRAG1-KO mice than in male IRAG1-KO mice.

More
© Text is available under the terms and conditions of the Creative Commons Attribution (CC BY) license (http://creativecommons.org/licenses/by/4.0/)
Upload a video for this entry
Information
Subjects: Biochemistry & Molecular Biology
Contributor MDPI registered users' name will be linked to their SciProfiles pages. To register with us, please refer to https://encyclopedia.pub/register :
Jens Schlossmann
View Times: 50
Revisions: 3 times (View History)
Update Time: 11 Oct 2021
Table of Contents
1000/1000
Hot Most Recent