Submitted Successfully!
Thank you for your contribution! You can also upload a video entry related to this topic through the link below:
https://encyclopedia.pub/user/video_add?id=10450
Check Note
2000/2000
TRPC Channels in Cardiac Plasticity
Edit
Upload a video
This entry is adapted from 10.3390/cells9020454

The heart flexibly changes its structure in response to changing environments and oxygen/nutrition demands of the body. Increased and decreased mechanical loading induces hypertrophy and atrophy of cardiomyocytes, respectively. In physiological conditions, these structural changes of the heart are reversible. However, chronic stresses such as hypertension or cancer cachexia cause irreversible remodeling of the heart, leading to heart failure. Accumulating evidence indicates that calcium dyshomeostasis and aberrant reactive oxygen species production cause pathological heart remodeling. Canonical transient receptor potential (TRPC) is a nonselective cation channel subfamily whose multimodal activation or modulation of channel activity play important roles in a plethora of cellular physiology.

The heart is a pump, delivering oxygen and nutrients to all tissues in the body through blood vessels. During development, heart size and contractile force gradually increase, which is accompanied by structural changes, e.g., hypertrophy, T-tubule formation, and arrangement of sarcomeres [1]. However, the completely developed adult heart changes its structure in response to the hemodynamic load caused by body demands. Flexible changes of heart structure are caused by individual cardiomyocytes and non-cardiomyocyte cells in the heart. Structural changes of cardiomyocytes are directly linked to their contractile force [2]. Therefore, increased oxygen or nutrition demands by the body increase muscle mass of the heart, which is provided by cardiac hypertrophy. In contrast, reduced hemodynamic load to the heart induces a reduction of cardiac muscle mass, which is caused by cardiomyocyte atrophy. In addition, nonmyocyte cells such as cardiac fibroblasts also play important roles to regulate structural integrity and electrical conduction in the heart by regulating extracellular matrix proteins [3]. Although flexible changes of the heart structure are an inherently adaptive feature, many cardiac diseases are brought about by maladaptive cardiac responses to chronic stresses. Therefore, understanding of the underlying mechanism of cardiac plasticity is important for both the prevention of and protection from cardiovascular diseases.

The trp gene was first discovered in a phototransduction mutant of Drosophila [4]. A spontaneous mutation in trp resulted in a transient receptor potential in response to continuous light. There are 28 mammalian TRP homologues, which can be further divided into six subfamilies based on genetic and functional similarities: TRPC (canonical), TRPV (vanilloid), TRPM (melastatin), TRPP (polycystin), TRPML (mucolipin), and TRPA (ankyrin). TRP channels have common structural features, including six transmembrane domains, a pore domain between the fifth and sixth transmembrane domains, and a preserved 25-amino-acid sequence termed the ‘TRP domain’. TRPC family proteins, comprising seven mammalian homologues (TRPC1–TRPC7), are the most evolutionally preserved TRP channels with regard to the original form identified in Drosophila. Therefore, it was believed and later demonstrated that they function as receptor-activated calcium channels [5]. Among them, TRPC4 and TRPC5 have about 65% amino acid homology, while TRPC3, TRPC6, and TRPC7 have about 75% homology [6]. TRPC1 was originally reported as a candidate subunit of store-operated Ca2+ channels [7][8][9][10]. The functional importance of TRPC1 channels is manifested by the promotion of functional coupling between endoplasmic reticulum and the plasma membrane during receptor-induced Ca2+ signaling [11]. In addition, it has been shown that mechanical stretch activates TRPC1 in mammalian cells [12]. Thus, TRPC proteins have two important roles: one as a functional channel activated by mechanical stretch or endoplasmic reticulum store depletion and the other as a platform to organize receptor-activated Ca2+ channels and intracellular signaling molecules for efficient signal transduction [13].
TRPC channels are widely recognized to be activated downstream of phospholipase C (PLC)-coupled receptors such as G protein-coupled receptors (GPCRs) and receptor tyrosine kinases [13]. As a result of their universal activation mechanism in many cell types, TRPC channels play important roles in basic cellular responses including proliferation, differentiation, and death in response to various environmental stimuli. Recent findings indicate that in addition to PLC-mediated activation, TRPC channels are multimodally activated by environmental stimuli such as mechanical stretch, hypoxia, and oxidative stress [14][15][16][17][18][19]. In particular, TRPC1 and TRPC6 are suggested to be activated by mechanical stimuli [12][20]. Later studies suggested that mechanical activation of TRPC1 and TRPC6 is mediated by phospholipase-dependent mediators [21][22][23][24]. Physiological or pathophysiological conditions expose the heart to changes in mechanical loading and oxygen supply, as well as oxidative stress, especially in the pathological heart. Therefore, TRPC channels play important roles in transducing these environmental stimuli into Ca2+ and/or chemical signals within cardiomyocytes.
All TRPC channels are expressed in cardiomyocytes, except TRPC2. The expression of some of these channels is not high in normal conditions but is increased in the failing heart [25]. According to studies using heterologous expression systems, the TRPC family can be further subdivided into two groups: TRPC1/C4/C5 and TRPC3/C6/C7. Apart from several observations, TRPC channels form functional channels by forming homo- or heterotetramers within these groups. So far, heterologous expression systems have demonstrated that the difference between these two groups involves activation by the PLC product of diacylglycerol (DAG) [26]. TRPC3/C6/C7 is activated directly by DAG, whereas TRPC1/C4/C5 is not [27]. However, Storch et al. recently revealed that DAG activates TRPC4/TRPC5 [28]. Structural analysis with cryogenic electron microscopy revealed the structural conservation of TRPC family channels [29][30][31][32]. This is further supported by the fact that a glycine residue in the selective filter of TRPC3 is both critical to the recognition of lipid mediators and conserved among TRPC channels [33]. Although the actual mechanism of TRPC channel downstream surface receptor activation is still not completely understood [34], its importance in cardiac plasticity has been extensively documented in the model of neurohumoral-factor-induced cardiac remodeling. The original concept of TRPC channels in cardiac remodeling is quite simple. First, major pro-hypertrophic factors such as angiotensin II (AngII) and endothelin-1 activate their receptors, which couple to PLC and downstream TRPC channels. Second, TRPC channels mediate Ca2+ influx, which activates major hypertrophic signaling of calcineurin (CaN)/nuclear factor of activated T cells (NFAT). However, recent findings indicate that the involvement of TRPC channels is more complex and chaotic. At present, it is not easy to understand and conceptualize the importance of TRPC channels in cardiac plasticity. Therefore, we herein review recent findings about TRPC channels in cardiac remodeling and raise models and questions that need to be addressed in the near future. 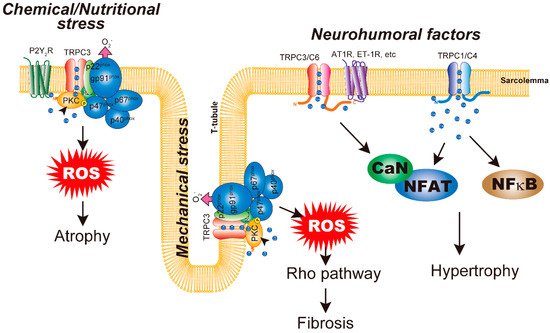 Cardiac muscle mass is decreased in response to a reduction of hemodynamic load, which is known to be caused by microgravity, long-term bed rest, or cancer cachexia. Cardiac atrophy is mediated by increased protein breakdown by the ubiquitin–proteasome system, Ca2+-dependent calpain system, lysosomal system, and autophagy [56]. Hemodynamic unloading by heart transplantation has revealed that unloading stresses increase the expression of calpain proteases [57] and E3 ubiquitin ligases MuRF1 and atrogin-1 [58]. Interestingly, Taegtmeyer’s group observed similar induction of a fetal gene program in atrophied hearts as demonstrated in hypertrophied hearts [39][56]. Activation of the fetal gene program seems to be an adaptive response to metabolic changes of the heart. Therefore, atrophic responses of the heart are not a passive reduction of muscle mass but an active remodeling of heart structure and function occurring in response to a change of hemodynamic load. Compared with hypertrophic responses, underlying mechanisms of cardiac atrophy remain largely elusive. Ca2+ signaling likely plays important roles in cardiac atrophy, as the calpain system requires increases of intracellular Ca2+ [59], and some reports have demonstrated Ca2+ dyshomeostasis in unloaded cardiomyocytes [60][61]. The molecular mechanism underlying cardiac atrophy is presumed based on observations of skeletal muscle atrophy. In skeletal muscle, mechanical unloading causes mitochondrial dysfunction and reactive oxygen species (ROS) production.
In contrast to cardiac hypertrophy, the molecular mechanism of cardiac atrophy remains largely unknown. Doxorubicin (DOX) is a highly effective anticancer drug prescribed for a wide range of cancers. However, the dose-dependent cardiotoxic effects of DOX limits its long-term use. Specifically, the cardiotoxic effects of DOX include arrhythmias induced by its acute effect, the development of left ventricular systolic dysfunction (which leads to dilated cardiomyopathy), and congestive heart failure induced by its chronic effect [62][63]. It was demonstrated that DOX initially induces cardiac shrinkage followed by the induction of myocardial apoptosis and interstitial fibrosis at later stages of left ventricular dilated cardiomyopathy [64][65]. In Nox2–/– mice, DOX-induced structural remodeling was completely attenuated [66]. DOX treatment has been shown to increase Nox2 expression in the heart [66][67][68]. Strikingly, the reduction of Nox2 expression by treatment with paeoniflorin suppressed DOX-induced cardiomyocyte apoptosis [67]. In our mouse model, DOX treatment induced cardiac atrophy from 2 weeks after treatment. DOX treatment increased Nox2 protein abundance, which was significantly suppressed by the absence of TRPC3. TRPC3-knockout mouse hearts maintained both whole-heart and cross-sectional areas of cardiomyocytes [68]. Therefore, similar to mechanical overloading, TRPC3 can couple with Nox2 in DOX-induced cardiac atrophy. We recently revealed that nutritional deficiency caused by glucose and amino acid starvation and hypoxia induces cardiomyocyte atrophy [69]. Nutritional stresses evoke intracellular ATP release to the extracellular space, as has been demonstrated in cardiomyocytes and other cells [70][71][72]. Extracellular ATP is the actual signal inducing atrophic responses in cardiomyocytes. As mentioned above, it is known that extracellular ATP does not induce cardiac hypoxia, even with a significant increase of the CaN/NFAT pathway. Atrophic responses of cardiomyocytes could be observed with stimulation of around 1 mM extracellular ATP. A submaximal concentration of ATP (e.g., 100 μM) does not induce atrophic responses. However, the dose responses of ATP to cardiomyocyte atrophy correlated well with intracellular ROS production. Indeed, high ATP stimulation does not increase TRPC3 or Nox2 protein abundances but enhances the interaction between them. Atrophic responses caused by both nutritional stresses and high extracellular ATP are sensitive to the specific P2Y2 receptor antagonist, indicating that the P2Y2 receptor is upstream of TRPC3–Nox2 coupling. Interestingly, DOX-induced atrophic responses were also suppressed by a P2Y2 receptor antagonist. These results suggest the critical involvement of intracellular ATP release and subsequent TRPC3 activation in stress-sensing and transduction of cardiomyocytes (Figure 1).

More
© Text is available under the terms and conditions of the Creative Commons Attribution (CC BY) license (http://creativecommons.org/licenses/by/4.0/)
Upload a video for this entry
Information
Subjects: Cell Biology
Contributor MDPI registered users' name will be linked to their SciProfiles pages. To register with us, please refer to https://encyclopedia.pub/register :
Takuro Numaga-Tomita
View Times: 46
Revisions: 2 times (View History)
Update Time: 03 Jun 2021
Table of Contents
1000/1000
Hot Most Recent