Submitted Successfully!
Thank you for your contribution! You can also upload a video entry related to this topic through the link below:
https://encyclopedia.pub/user/video_add?id=10427
Check Note
2000/2000
SR-B1 in Cardiovascular Disease
Edit
This entry is adapted from 10.3390/biomedicines9060612

The scavenger receptor B class type 1 (SR-B1) was identified as the high-affinity HDL receptor, which facilitates the selective uptake of cholesterol ester (CE) into the liver via HDL and is also implicated in the plasma clearance of LDL, very low-density lipoprotein (VLDL) and lipoprotein(a) (Lp(a)). Thus, SR-B1 is a multifunctional receptor that plays a main role in the metabolism of different lipoproteins.

Cardiovascular disease (CVD) remains the primary cause of mortality and morbidity worldwide [1]. The principal risk factor for developing CVD is relatively high plasma level of low-density lipoprotein cholesterol (LDLc) [2][3][4]. Numerous epidemiological and clinical investigations have revealed that plasma level of high-density lipoprotein cholesterol (HDLc) correlates inversely with the risk of CVD [5][6]. This association has been described by anti-atherogenic capacities of HDL, comprising its role in reverse cholesterol transport (RCT), in which cholesterol from peripheral tissues is transferred to the liver for excretion in bile and its ability to receive cholesterol from macrophages in the artery wall [7][8]. However, Mendelian randomization studies [9][10] and pharmacological interventional studies [11][12] do not support the concept that HDLc directly reduces the risk of CVD [8]. In addition, a retrospective analysis of large epidemiological studies showed that high HDLc concentration is associated with higher risk for CVD [13][14]. These results support the hypothesis that HDL metabolism and functionality is more important than HDLc levels for CVD risk prediction [14]. Acton et al. identified the scavenger receptor B class 1 (SR-B1) as a high-affinity HDL receptor, which facilitates the selective uptake of cholesterol esters (CE) in HDL into the liver [15]. This receptor is also implicated in the plasma clearance of LDL, very low-density lipoprotein (VLDL) and lipoprotein(a) (Lp(a)), lipoproteins with pro-atherogenic properties [16][17][18][19]. Therefore, SR-B1 is involved in cholesterol homeostasis, lipoprotein metabolism and atherosclerosis [4]. In addition, SR-B1 plays a relevant role in HDL-mediated cellular signaling [20], and might play a crucial role in the pathogenesis of non-alcoholic fatty liver disease (NAFLD) [21], since this receptor is linked to dyslipidemia [22].

SR-B1 is mainly identified for promoting selective uptake of CE from HDL or other lipoproteins to cells by a non-endocytic process [23][24][25][26][27][28]. Moreover, SR-B1 mediates selective hepatic uptake of HDL-CE, free cholesterol (FC), triglycerides (TG), and phospholipids by a three step mechanism [24][25][26][27]. First, cholesterol-rich donor lipoprotein particles could bind to the extracellular loop domain of the receptor. Then, SR-B1 could promote the transfer of CE from the lipoprotein particles to the plasma membrane, and finally, the cholesterol poor lipoprotein particles could release back into the circulation [3][23][24]. Furthermore, SR-B1 requires oligomerization to promote selective lipid uptake, but not HDL binding [26][27][28][29][30][31]. Although the mechanism by which SR-B1 facilitates the transfer of CE to the plasma membrane is not fully understood, a model has been proposed in which a hydrophobic tunnel is formed by the extracellular domain of the receptor between lipoprotein particles and the cell membrane through which CE diffuse in a concentration gradient manner [27][32]. The recent publication of the high-resolution crystal structure of the extracellular domain of LIMP-2, a homologue of SR-B1, supports the validity of this mechanism [33].
In addition to selective CE uptake, SR-B1 also facilitates the efflux of free cholesterol between cells and lipoproteins [34][35]. Briefly, this mechanism carried out by HDL is known as RCT and consists of the transport of cholesterol via HDL from peripheral tissues such as macrophages or endothelial cells to the liver for cholesterol excretion, bile acid production or steroid hormone synthesis in steroidogenic organs [26][36]. Apart from SR-B1, two more receptors are involved in this process: ATP-binding cassette A1 (ABCA1), that mediates unidirectional efflux of cholesterol and phospholipids to apolipoprotein (apo) A-I and apo E [27][37], and ATP-binding cassette G1 (ABCG1), that promotes unidirectional efflux of cholesterol to nascent HDL particles [27][38].

3. SR-B1, an Important Participant in the Development of Cardiovascular Disease

SR-B1 has been involved in the progression of atherosclerosis [4]. SR-B1, via HDL, contributes to the transport of cholesterol from macrophages through cholesterol efflux to the liver, and is also implicated in reducing inflammation and oxidation [3][4][27]. SR-B1 interaction with HDL modulates macrophage inflammation through activation of Akt and decreased activation of nuclear factor-κB (NF-κB), promoting the release of anti-inflammatory cytokines, including interleukin 10 and transforming growth factor-beta (TGF-ß) [26][39]. In the endothelial cells, SR-B1 inhibits inflammation via endothelial nitric oxide synthase (eNOS) activation and expression of the antioxidant enzyme, 3-beta-hydroxysteroid-delta 24-reductase (DHCR24) [4][40]. HDL and apo A-I also reduce oxidative modification of apo B containing lipoproteins [4]. Furthermore, SR-B1 in macrophages and endothelial cells could suppress the progression of atherosclerosis by modifying cholesterol trafficking and reducing atherosclerotic lesion through limiting foam cell formation [41][42]. Moreover, SR-B1 in macrophages and endothelial cells could also promote the uptake by HDL of modified lipoproteins that contribute to the development of early atherosclerotic lesions [43][44][45]. Hepatic SR-B1 mediates the clearance of VLDL, LDL, and Lp(a), whose accumulation in plasma facilitate the progression of atherosclerosis [16][17][18][19]. SR-B1 promotes the reduction of apoptosis, and mediates efferocytosis of apoptotic cells in macrophages of atherosclerotic lesions [46][47]. Platelet SR-B1 has been implicated as a negative controller in the development of thrombosis [48][49] (Figure 1) (Table 1). 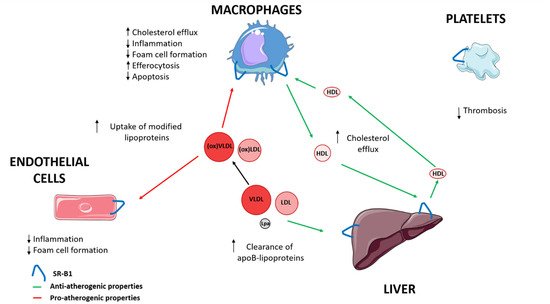 More
© Text is available under the terms and conditions of the Creative Commons Attribution (CC BY) license (http://creativecommons.org/licenses/by/4.0/)
Upload a video for this entry
Information
Subjects: Cardiac & Cardiovascular Systems
Contributor MDPI registered users' name will be linked to their SciProfiles pages. To register with us, please refer to https://encyclopedia.pub/register :
Irene Gracia-Rubio
View Times: 55
Revisions: 2 times (View History)
Update Time: 03 Jun 2021
Table of Contents
1000/1000
Hot Most Recent