Submitted Successfully!
Thank you for your contribution! You can also upload a video entry related to this topic through the link below:
https://encyclopedia.pub/user/video_add?id=10330
Check Note
2000/2000
Morphology of Aspergillus flavus
Edit
Upload a video
This entry is adapted from 10.3390/agriculture10100450

This entry aimed to morphologically characterize and determine the aflatoxigenic and non-aflatoxigenic Aspergillus flavus isolates. Macromorphological characteristics were determined by observing the colony color and texture, while the micromorphological characteristics were determined by examining the spore color, size, structure, conidiophore structure, and vesicle shape. The production of aflatoxin was determined by direct visualization of the UV fluorescence of A. flavus colonies on CCA. Aflatoxin was qualitatively detected in 18 (45%) isolates of A. flavus using UV fluorescence screening while the remaining 22 (55%) isolates did not exhibit any aflatoxin production.

AFs are extremely potent carcinogens, predominantly found in cereal crops, like corn, rice, nuts, and sorghum [1]. Currently, several AFs have been discovered; however, the most significant AF are AFB1, AFB2, AFG1, and AFG2 [2]. Food contamination with aflatoxigenic Aspergillus spp. and the subsequent production of AF could take place during, pre-and post-harvest stages [3][4][5][6][7]. Food contamination by AFs depends on vulnerability, environmental factors, fungal community, and their capacity to penetrate the food. Humans could be exposed to AF through sporadic intake of adulterated foodstuff, causing nutritional deficiencies, immunosuppression, and hepatocellular carcinoma [8].

Owing to the tropical climate of Malaysia, the temperature remains around 28°C to 31°C [9], and humidity ranges from 60% to 80% [10] throughout the year, which provides a suitable environment for A. flavus to contaminate the food and food products, and produce AF. To the best of our knowledge, no work has been documented thus far on the prevalence of aflatoxigenic and non-aflatoxigenic strains of A. flavus isolated from sweet corn kernels and soil samples collected from the Cameron Highlands region.

2. Morphological Characterization and Determination of Aflatoxigenic and Non-Aflatoxigenic Aspergillus flavus

Forty isolates of A. flavus were detected from the sweet corn and soil samples (Figure 1). The A. flavus isolates were identified through the observation of their morphological characteristics as per the key descriptions by Klich [11] and Clayton [12]. 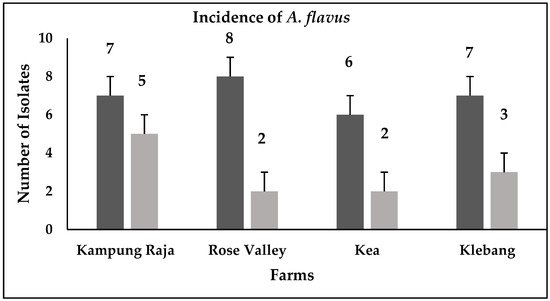 The morphology of A. flavus colonies on PDA is presented in Figure 2. In the beginning, the mycelial color of A. flavus was white. Following 3 d of incubation, the A. flavus colony formed olive-green conidia that dominated the colony’s appearance. Generally, the colonies were flat at their borders while raised in the middle. On PDA, all the A. flavus isolates produced exudates (droplets) that are brown in color or colorless. 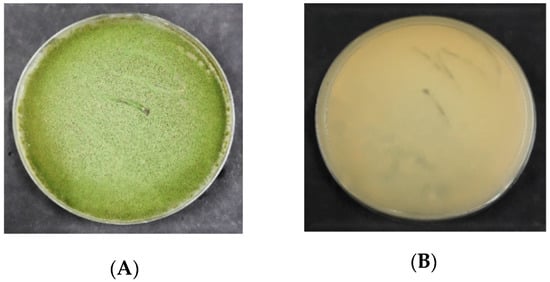 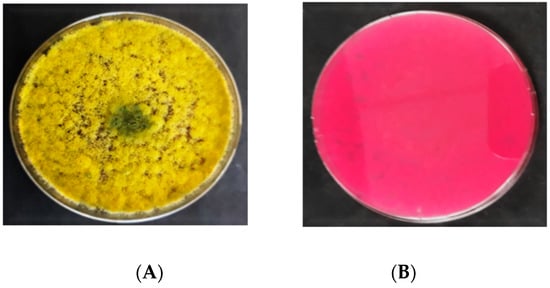 Figure 3. Colony morphology of A. flavus on dichloran rose bengal chloramphenicol (DRBC); (A) = obverse, (B) = reverse.

The inoculation of A. flavus on AFPA resulted in the colonies having various profiles and dimensions (Figure 4). The colonies’ color of A. flavus on AFPA was whitish brown with dispersed conidia. On AFPA, the isolates of A. flavus did not produce exudates or soluble pigments. A. flavus produced a bright orange or golden color on the reverse due to the reaction between aspergillic acid with ferric ammonium citrate contained in the medium. 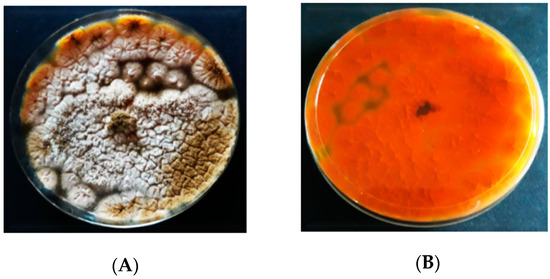 Figure 4. Colony morphology of A. flavus on Aspergillus flavus and parasiticus agar (AFPA); (A) = obverse, (B) = reverse.

The microscopic characteristics of A. flavus are shown in Figure 5. Under the microscope, the conidiophores of A. flavus isolates were colorless, thick-walled, roughed, and bearing vesicles. The diameter of the conidiophores ranged from 800 to 1200 µm. The vesicle shape of A. flavus isolates was globose to sub-globose. The diameter of the vesicles ranged from 1800 to 2000 µm. The cells were uniseriate or biseriate. In the biseriate cells, the phialides grew on the metulae whereas, in uniseriate cells, they grew on the vesicles. The metulae enclosed the vesicles’ surface and emitted in all directions. The conidia were globose, thin-walled, slightly roughed, and ranged from 250 to 450 µm in diameter. 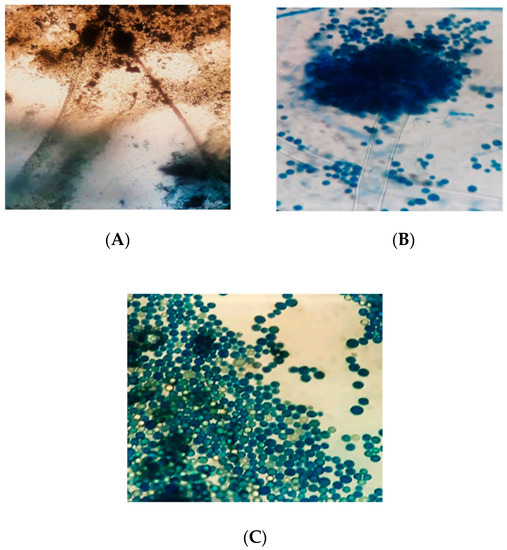 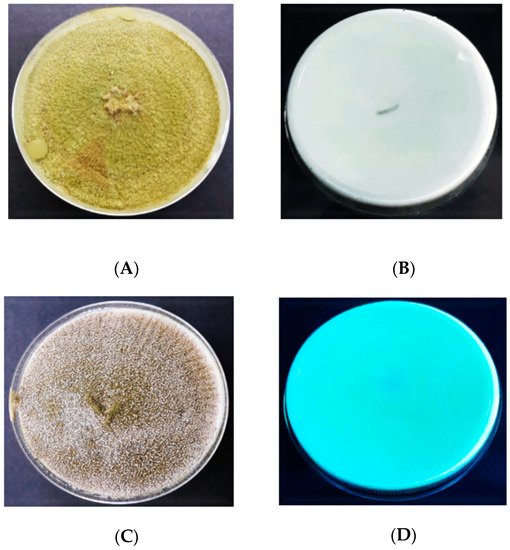 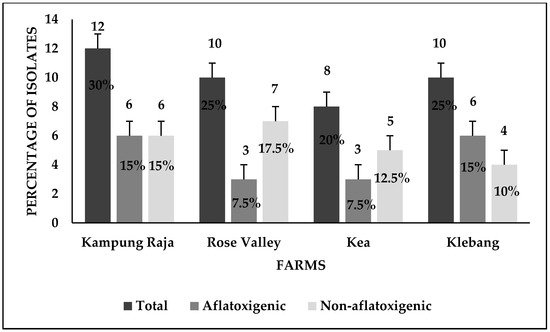 Overall, the A. flavus had olive-green, yellowish-green, or dark green colonies surrounded by a white circle that was eventually covered by conidia. The colonies’ textures were usually velvety or woolly with a floccose center. The A. flavus colonies produced exudates on two of the four culture media utilized in this study. Similarly, sclerotia were detected in the majority of A. flavus isolates, as it is a specific characteristic of aflatoxigenic A. flavus. In the interpretation of the taxonomic descriptions by Klich [11], the isolates’ colony morphology in this study bore a resemblance to A. flavus as shown in Figure 2 and Figure 3. On the other hand, some other Aspergillus species have the same phenotypical characteristics and which makes it difficult to differentiate them from A. flavus. It is known to have the same colony color as A. oryzae. This renders the need for comprehensive scrutiny using microscopic and macroscopic characteristics for accurate identification and classification. However, there is a consensus that, even microscopically, some characteristics are common among Aspergillus isolates [12]. The microscopic features of A. flavus such as conidiophore, vesicles, sterigmata and conidia were examined in this study.

The screening of A. flavus isolates, based on their fluorescence characteristics under UV light at 365 nm was carried out. Once the aflatoxigenic isolates of A. flavus were exposed to UV light, they showed a blue fluorescence on the reverse of the colonies, while the non-aflatoxigenic A. flavus did not show any fluorescence (Figure 7). Although the culture-based techniques are comparatively simple and economical, for aflatoxin detection, however, these techniques are usually employed in combination with chromatographic methods [13]. For the precise quantification of aflatoxin, a more advanced method such as high-performance liquid chromatography equipped with fluorescence detection (HPLC-FLD) would be useful. Similarly, it has been reported that strains of A. flavus could produce B and G aflatoxins [14], a recent classification of Aspergillus section Flavi noted that such strains, though morphologically similar to A. flavus, were completely novel species [15][16][17]. These outcomes pointed out the fact that modern molecular approaches are mandatory to be used for A. flavus isolates’ characterization.

In conclusion, both aflatoxigenic and non-aflatoxigenic strains of A. flavus were present in the sweet corn kernels and soil of Cameron Highlands, Malaysia. Cameron Highlands being a primary source of agricultural produce could take measures to ensure that aflatoxin contamination is minimized. Non-aflatoxigenic strains indigenously present could be further harnessed into a biological control agent that can reduce the dependency on chemically synthesized pesticides. Culture media and morphology are rapid tools for the characterization of A. flavus. The morphological characteristics of these isolates were similar to those explained in the published identification manuals. The screening of A. flavus isolates for aflatoxin detection under UV light (365 nm) is a fast and reliable method to distinguish the aflatoxigenic and non-aflatoxigenic isolates. Although the culture-based techniques are comparatively simple and economical, however, for the precise quantification of aflatoxin, a more advanced method such as high-performance liquid chromatography equipped with fluorescence detection (HPLC-FLD) would be useful. This further reinforces the need for measures to prevent the fungal contamination of sweet corn and emphasizes the importance of field interventions aimed at curbing agricultural soil contamination by these fungi.

More
© Text is available under the terms and conditions of the Creative Commons Attribution (CC BY) license (http://creativecommons.org/licenses/by/4.0/)
Upload a video for this entry
Information
Subjects: Microbiology
Contributor MDPI registered users' name will be linked to their SciProfiles pages. To register with us, please refer to https://encyclopedia.pub/register :
Rahim Khan
View Times: 1396
Revisions: 2 times (View History)
Update Time: 30 Aug 2021
Table of Contents
1000/1000
Hot Most Recent