Submitted Successfully!
Thank you for your contribution! You can also upload a video entry related to this topic through the link below:
https://encyclopedia.pub/user/video_add?id=10281
Check Note
2000/2000
Animal Lectins
Edit
This entry is adapted from 10.3390/ph14050490

Animal lectins are proteins with carbohydrate recognition activity. Galectins, the β-galactoside binding lectins, are expressed in various cells and have been reported to regulate several immunological and physiological responses. Recently, some galectins have been reported to regulate some viral infections, including influenza A virus (IAV); however, the mechanism is still not fully understood.

Influenza is an acute, contagious infectious disease caused by the influenza virus. Influenza viruses belong to the Orthomyxoviridae family, with six to eight segments of linear negative-sense, single-stranded RNA and comprise a family of four distinct viruses (influenza A, B, C, and D viruses) [1]. Among them, influenza A and B viruses are the pathogens causing seasonal influenza disease. The seasonal influenza virus epidemics are estimated to cause 3–5 million cases of severe infection and result in 290,000–650,000 deaths annually worldwide [2][3]. Higher mortality rates are seen in the elderly over 65 years old and children under 5 years old, as well as people in developing countries [4]. The burden for seasonal influenza epidemics is substantial and is significantly increased during influenza pandemics, such as a more recent, swine-originated H1N1 influenza pandemic in 2009 [5].
Great improvement has been achieved in the treatment of influenza, especially for patients with severe influenza infection. To date, the most effective strategies for the prevention and control of influenza disease are vaccination and antiviral therapy. Although influenza vaccine and antiviral drugs greatly reduced influenza outbreaks, there are still many limitations to these two approaches [6][7][8]. The current influenza vaccine can be either trivalent or quadrivalent, which may contain the strains of seasonal circulating influenza A (H1N1, H3N2) and influenza B (Yamagata or Victoria lineage). A substantial challenge for influenza vaccine is the continuous viral antigenic changes and variations, which may lead to vaccine mismatch that results in the reduction in the vaccine’s effectiveness (protection rate from 10 to 60%) [9][10]. As to influenza antiviral drugs, the major candidates are the inhibitors that can block NA activity and M2 protein function to ameliorate influenza release and viral uncoating during the influenza virus life cycle. The most common clinical treatment of influenza are NA inhibitors including, oseltamivir, zanamivir, and peramivir, as well as the M2 proton channel blockers including amantadine and rimantadine. Unfortunately, several emerging strains of influenza A virus, such as the 2009 H1N1 influenza virus and some avian H5N1 or H7N9 isolates, were reported to be naturally carrying drug-mutation genes, which leads to resistance against these drugs [11].
Lectins are a group of proteins with carbohydrate recognition activity, and they are characterized into several families based on their different cellular locations and their specificities for a variety of carbohydrate structures according to the features of their carbohydrate recognition domain (CRD) binding preference. Interaction between lectins and their recognition glycans mainly relies on their CRD binding to certain particular oligosaccharides expressed on cellular or microbial surfaces. Lectins have been categorized into many families based on their conserved structure of sequence motifs for sugar-binding and carbohydrate specificities such as calnexin, DC-SIGN, L-SIGN, mannose-6-phosphate receptors (MPRs), siglecs, galectins, and intelectins [12][13]. Recently, several lectins have been reported to participate in the regulation of virus infection and replication [14][15].
Galectins, previously categorized as S-type lectin, have a preference to bind β-galactoside sugars, such as N-acetyllactosamine (Galβ1-3GlcNAc or Galβ1-4GlcNAc), which are presented in N-linked and O-linked glycoproteins [16][17]. Galectins are the most conserved and ubiquitous lectin family, detected from protists to mammals. The first galectin was identified and characterized from the electric organs of the electric eel, Electrophorus electricus [18], and since then, members of the galectin family have been found in mammals, birds, amphibians, fish, nematodes, sponges, and some fungi [19][20]. Galectins have been reported to regulate various cellular or immunological functions [21]. Galectins are reported to be the pattern recognition receptors (PRRs) to recognize microbial invasion and regulate innate immune responses [22]. The basic structure of a galectin contains a carbohydrate recognition domain (CRD) (about 130 amino acids) that connects to a tandem repeat domain. Currently, galectins have been categorized into three main types—prototype, chimera type, and tandem-repeat type. The prototype galectins (Gal-1, Gal-2, Gal-5, Gal-7, Gal-10 Gal-11, Gal-13, Gal-14, and Gal-15) contain one CRD and are either monomers or noncovalent homodimers; the unique chimera-type galectin (Gal-3) contains a rare tandem that repeats of proline and glycine-rich short stretches fused onto the CRD; and tandem-repeat galectins (Gal-4, Gal-6, Gal-8, Gal-9, and Gal-12) contain two distinct CRDs, in tandem, connected by a linker peptide. Currently, 15 galectins have been identified in mammals, whereas 12 galectins are detected in humans [21][23] (Figure 1). 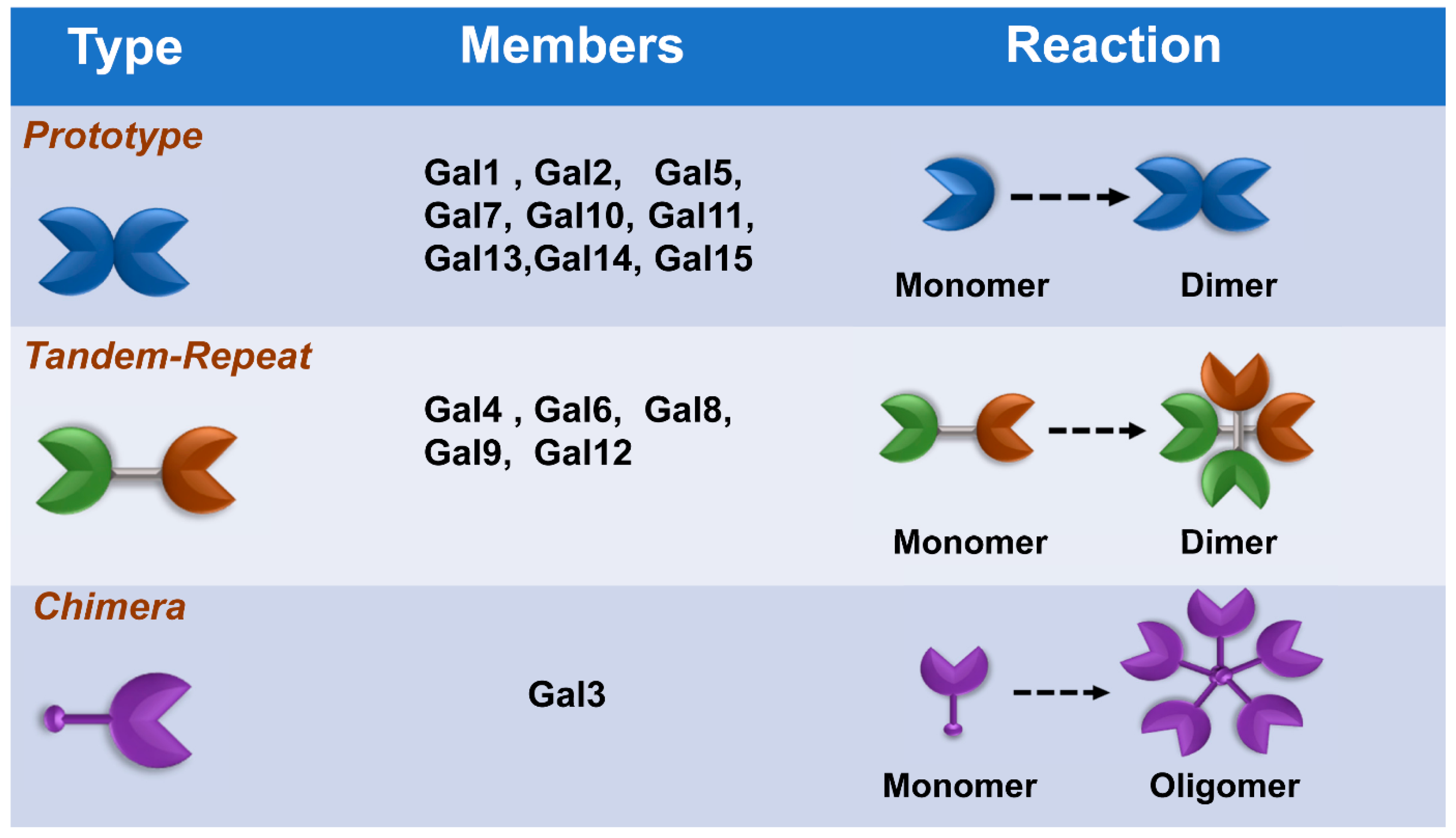 Figure 1. Classification of galectins. According to the number and arrangement of the carbohydrate recognition domains (CRDs), galectin family members are classified into three main types: prototype, chimera type, and tandem-repeat type. Some galectins can self-associate into dimers or oligomers.
Recently, galectins have been reported to participate in the regulation of several viral infections and replications, such as HIV-1, enterovirus, HSV-1, adenovirus, and dengue viruses. Some reports indicated that galectins have abilities to ameliorate influenza virus infection; however, the details of the role and regulatory mechanism are still not fully understood [17][24][25]. Accordingly, this study performs a systemic literature review to analyze and summarize the potential anti-influenza function of galectins.

2. The Antiviral Role of Galectins toward Influenza A Virus Infection

Our results indicate that among galectin members, only Gal-1, Gal-3, and Gal-9 were reported to have abilities to regulate influenza infection and replication via directly binding to glycosylated influenza HA or indirectly enhancing the immune response against IAV invasion (Figure 2) (Table 1). We also noted that out of the other type of influenza virus, only IAV had studies that reported its interaction, correlation, and modulation with galectins. Most studies provided lines of evidence denoting that expression or treatment with Gal-1 and Gal-9 ameliorated IAV infection via blocking viral binding and enhancing T-cell immune responses, respectively. The Gal-3 expression also participated in the amelioration of IAV infection; however, there were a few studies that offered data showing that Gal-3 had promotion capabilities during IAV and S. pneumoniae coinfection in vitro and in vivo models (Table 1). 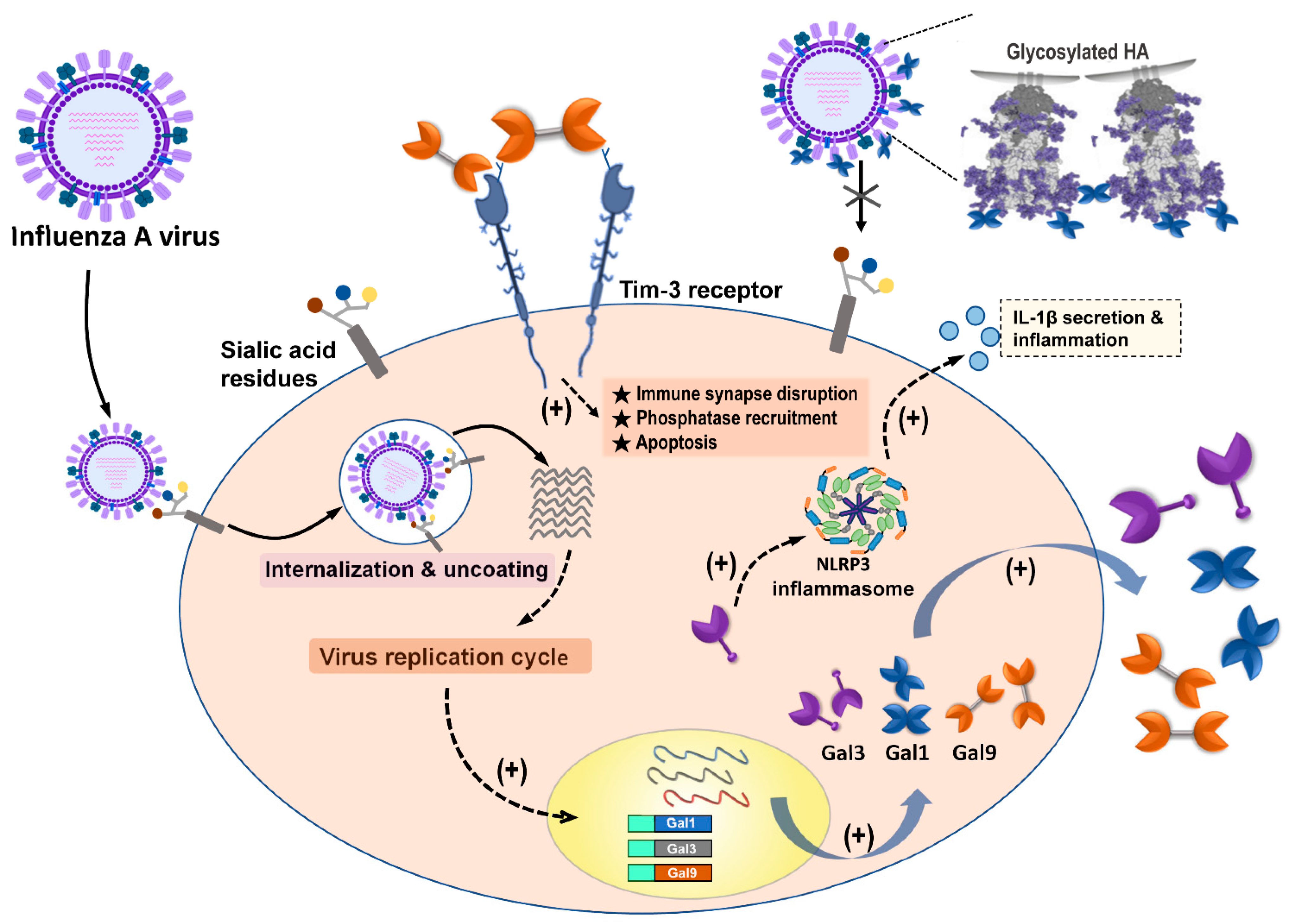 More
© Text is available under the terms and conditions of the Creative Commons Attribution (CC BY) license (http://creativecommons.org/licenses/by/4.0/)
Upload a video for this entry
Information
Subjects: Pharmacology & Pharmacy
Contributor MDPI registered users' name will be linked to their SciProfiles pages. To register with us, please refer to https://encyclopedia.pub/register :
Sheng-Fan Wang
View Times: 88
Revisions: 2 times (View History)
Update Time: 31 May 2021
Table of Contents
1000/1000
Hot Most Recent